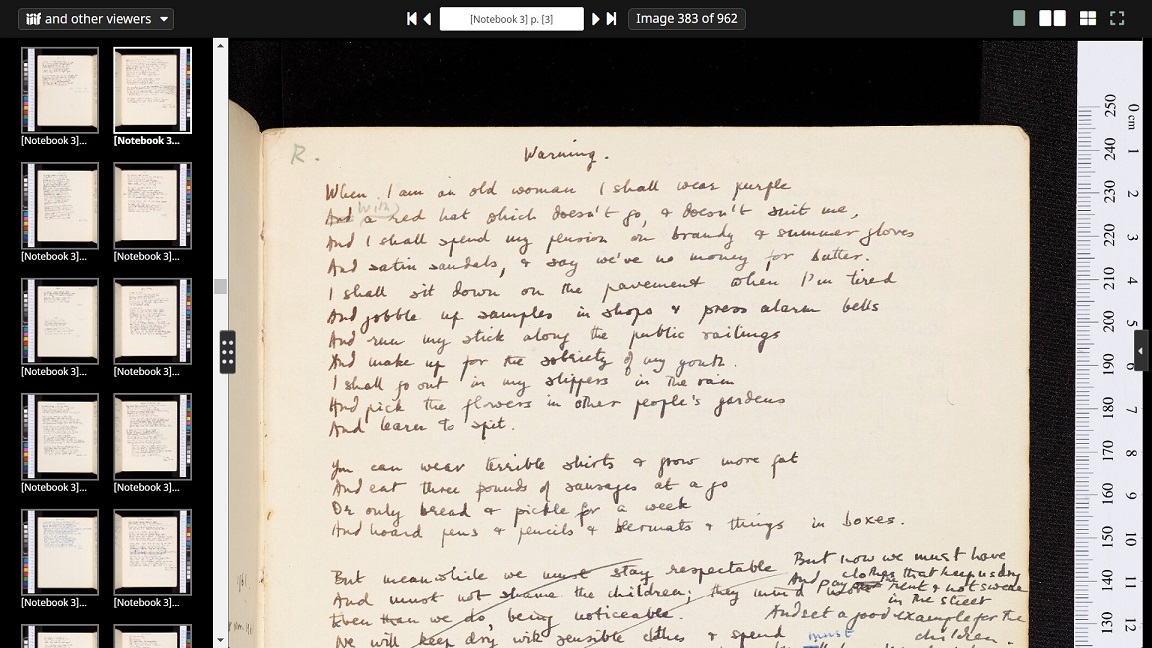 Five of Jenny Joseph’s poetry notebooks [MS. 12404/41] have been digitised and you can now see every page on Digital.Bodleian.

The notebooks are a rich distillation of 60 years of Jenny Joseph’s writing career, starting in 1949, just before she came to the University of Oxford to study English. The third notebook (page 3) includes a draft of her most well-known poem, ‘Warning‘ – When I am an old woman I shall wear purple / With a red hat that doesn’t go, and doesn’t suit me – two famous first lines which you can see corrected in this draft.

She wrote the poem in 1961 and first published it in the newsletter of the old people’s home her husband was working in at the time, and then in the magazine The Listener in 1962. She revised it further for her 1974 Cholmondeley Award winning poetry collection Rose in the Afternoon. The poem was a slow burner which surged in popularity in the 1980s, particularly in America, and it was widely anthologised and re-used for everything from tea-towels to cancer campaign adverts. The poem took on a life of its own, even losing its author at times – the Jenny Joseph archive includes a poster that attributes the lines to a mythical ‘Anonymous’. In 1996 ‘Warning’ was voted Britain’s favourite post-war poem and it even inspired new social groups like the Red Hat Society, a club for women over 50. You can find recordings of Jenny Joseph reading ‘Warning’ on YouTube, and readings of four other poems at the Poetry Archive.