Born in Glasgow and educated at Magdalen College, Oxford and the University College Hospital Medical School, London, Alan Tyson (1926-2000) held Research and Senior Research Fellowships at All Souls College, Oxford from 1952 to his retirement in 1994. He was a distinguished musicologist and a world authority on music manuscripts of the Viennese Classical composers, especially Mozart and Beethoven. His other musicological interests included authenticity, music printing, and music publishing. Initially, however, his career evolved around medicine and psychoanalysis. 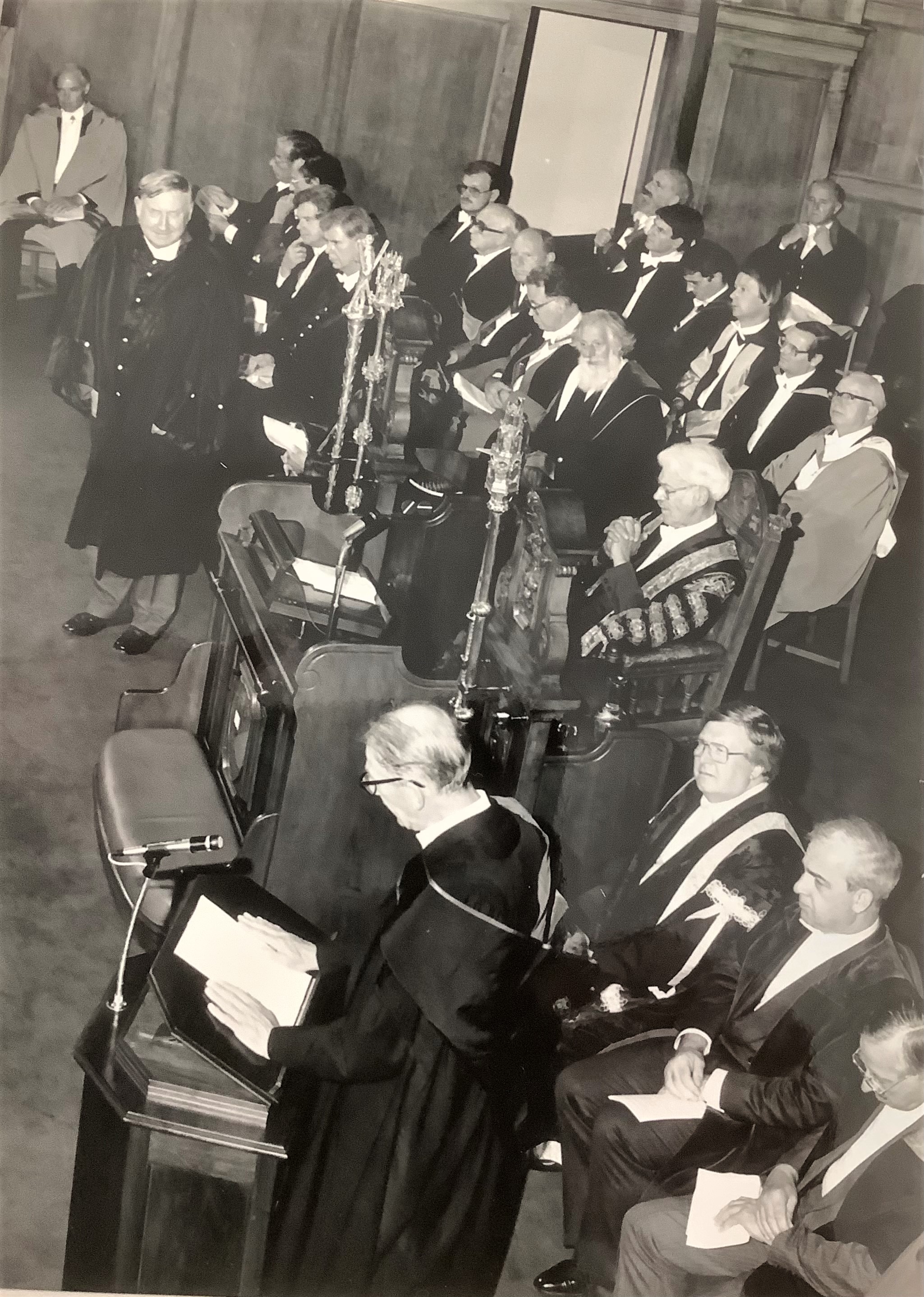 1. Alan Tyson collecting his Honorary Degree from the University of St Andrews, Scotland. 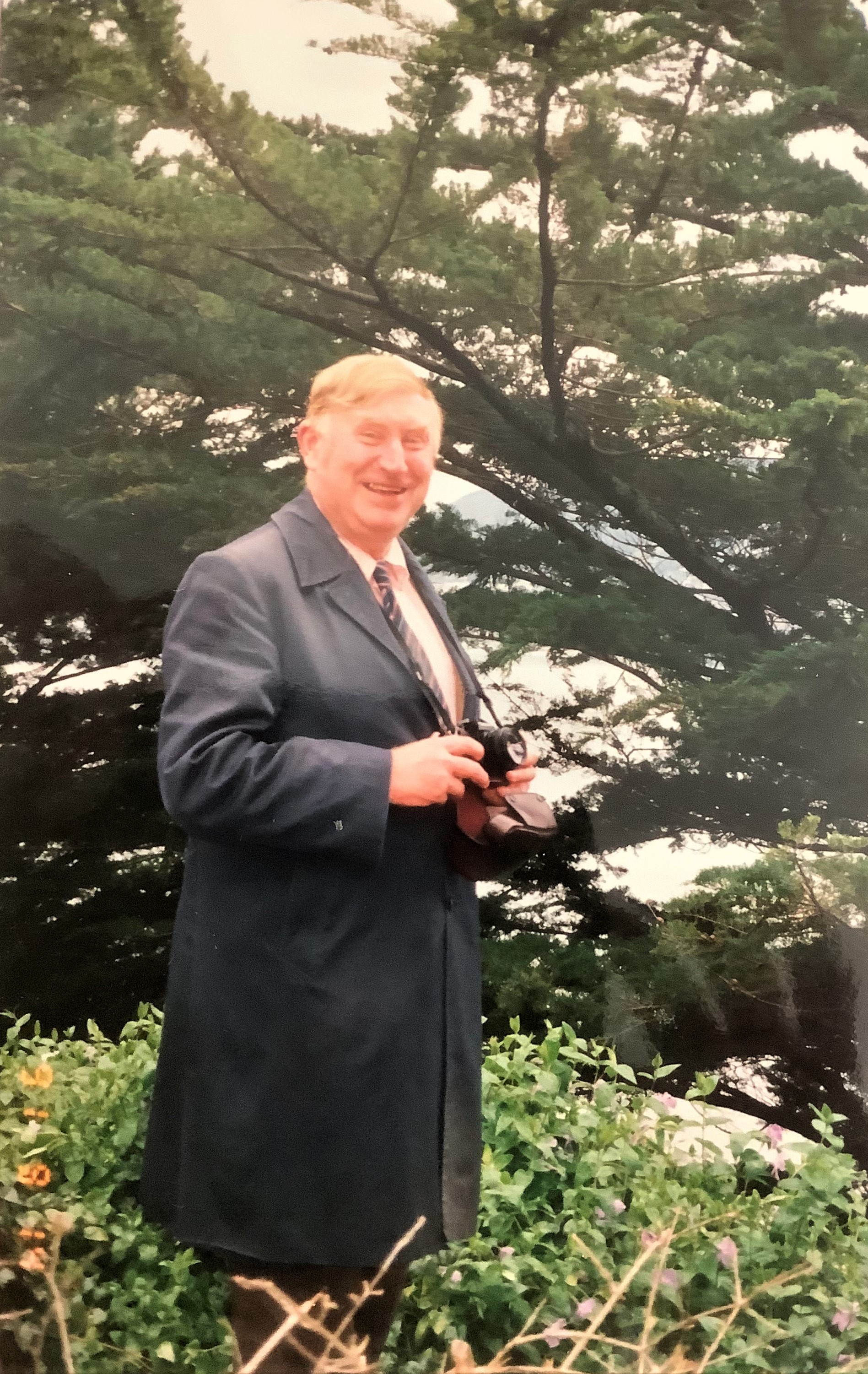 It is not certain what prompted him to devote the rest of his life to musicology, especially as he did not undergo a formal music education. Some suggest it was his passion for collecting, especially music, that made him change his mind.  Maybe he was curious how (well) the early and subsequent editions reflected the intentions of the composers? As he was not able to speak to Mozart or Beethoven as he would to his patients, he once explained, he turned to the composers’ autographs as his primary sources of information. While his earlier career helped him to determine the composers’ creative processes to some extent, it was his own meticulous methods when working with music manuscripts that brought the desired results. His pioneering work on watermarks, for example, enabled him to date (or re-date) many compositions. Tyson even invented his own term for the classification of watermarks resembling crescent moons, selenometry, a term which he advised should not be taken ‘wholly seriously’ (please see images 3 and 4).  He considered watermarks (together with the types of paper that contained them) so significant that he spent over 15 years working on an inventory of all watermarks in Mozart autographs. The watermarks catalogue was published in 1992 as part of the much-respected Neue Mozart-Ausgabe collected edition. 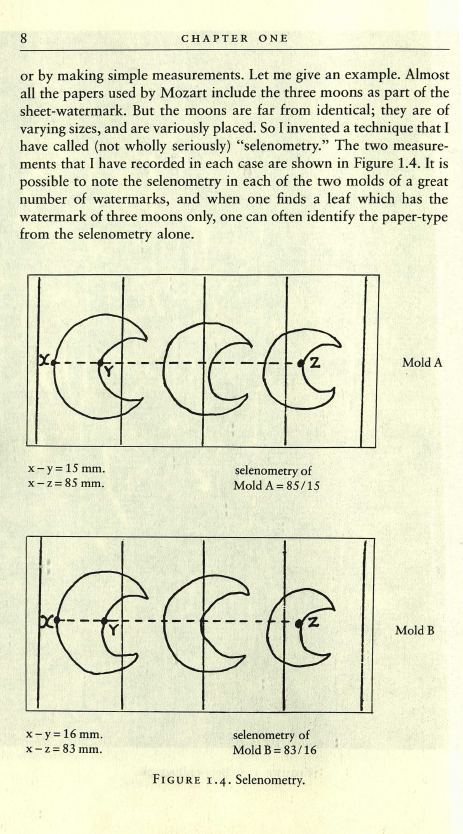 3. Explanation of the term selenometry in A. Tyson’s ‘Mozart: studies of the autograph scores’ (Cambridge, Mass.: Harvard University Press, 1987). 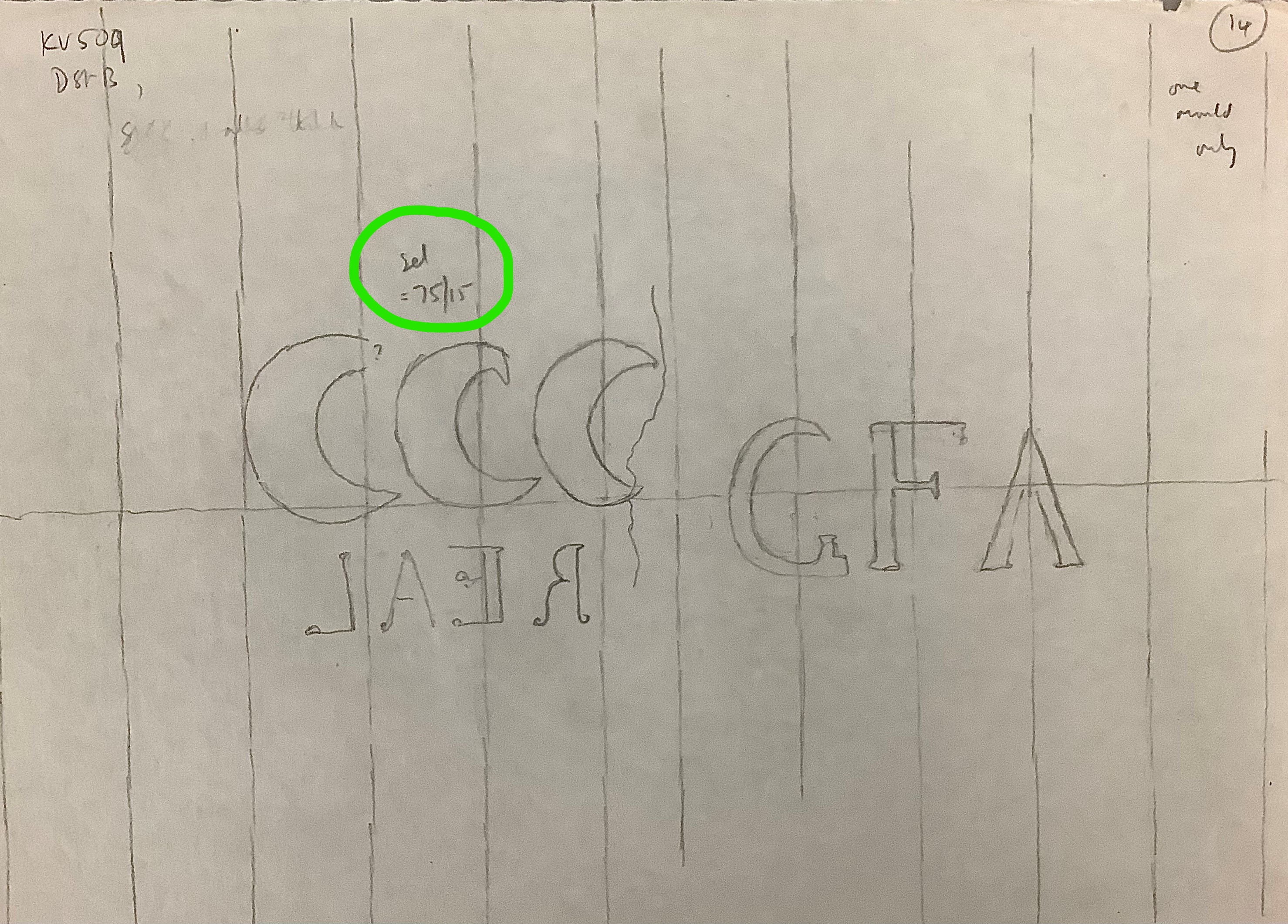 4. Tracing of watermarks in a Mozart autograph with noted selenometry. 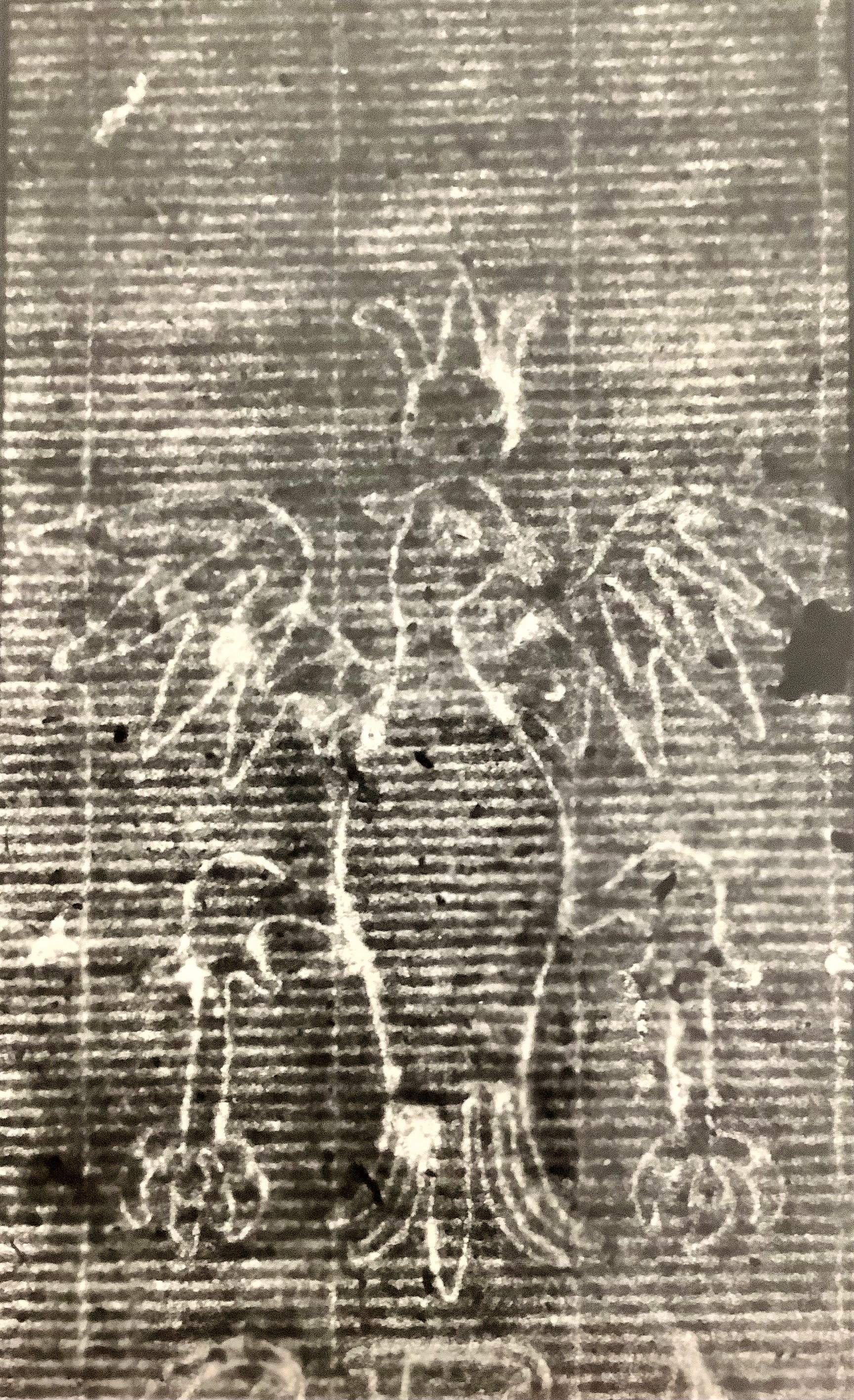 5. Watermark from Beethoven’s autograph clearly visible thanks to beta-radiography, an imaging technique innovative at the time of Tyson’s research.

Tyson was also fascinated by composers’ sketches. As early as 1964 he gave two BBC interviews (one radio and one television) on the sketchbooks used by Beethoven throughout his life. There are 11 archival boxes of notes spanning some 20 years on the subject and twice as much correspondence discussing the topic. The work and discussions culminated in 1985 with a publication (co-written with Douglas Johnson and Robert Winter) of The Beethoven sketchbooks: history, reconstruction, inventory.  This is just one of many significant publications with Tyson as author, co-author, or editor.

It was important to Tyson to examine as many original sources as possible, not only because he was a thorough researcher (earning him the designation ‘Sherlock Holmes of the music world’), but also because he wanted his work to be as comprehensive as possible. He got to know which institutions and which private collections held the autographs, and visited them one by one. He also had a good rapport with auction houses, who were happy to pass on his requests for viewing or information about (sometimes anonymous!) purchases just made. Additionally, Tyson was in demand when it came to authenticating ‘recently discovered’ manuscripts, which likewise expanded his ‘portfolio’. In one of his letters he expressed his amazement and delight that his research into Viennese composers would take him as far as New Zealand and Japan, where he would find further autographs. I had the pleasure of meeting Professor Tyson personally when he visited the Jagiellonian Library in Kraków, Poland. Anecdotally, he declined an offer of lunch and suggested a dinner after the Library closed as, he said, ‘when you are holding a Mozart manuscript, you do not feel like doing anything else but study it!’

Tyson continued to collect throughout his life eventually amassing an important collection of some 70 manuscripts and 2,200 early (sometime extremely rare) editions of music. In addition, his personal library comprised some 350 books representing both, source and up-to-date research material. Tyson used the items from his private collection to compare with those in libraries and elsewhere, which led him to a deep (and often authoritative) understanding of the history of the musical texts.

Tyson very generously bequeathed his archive to the British and Bodleian Libraries. In 2002 over 1000 items of printed music in the Bodleian’s portion of his collection were catalogued by one Margaret Czepiel. It was therefore thrilling for me to deal with the collection of Tyson’s working papers years later. Here, just as he had observed the creative processes of the composers he studied, I was able to see Tyson’s own working methods. An example can be seen in the images (6 and 7) where he annotated his earlier notes with additional, dated comments, no doubt following subsequent visits to the respective repositories and discussions with fellow researchers. In fact, the sheer volume of correspondence (26 boxes of just mail, with further exchanges among the 43 boxes of notes) is telling; he valued the views of his colleagues highly. It is clear that he thrived on these intellectually stimulating epistolary (and over-the-phone) debates. 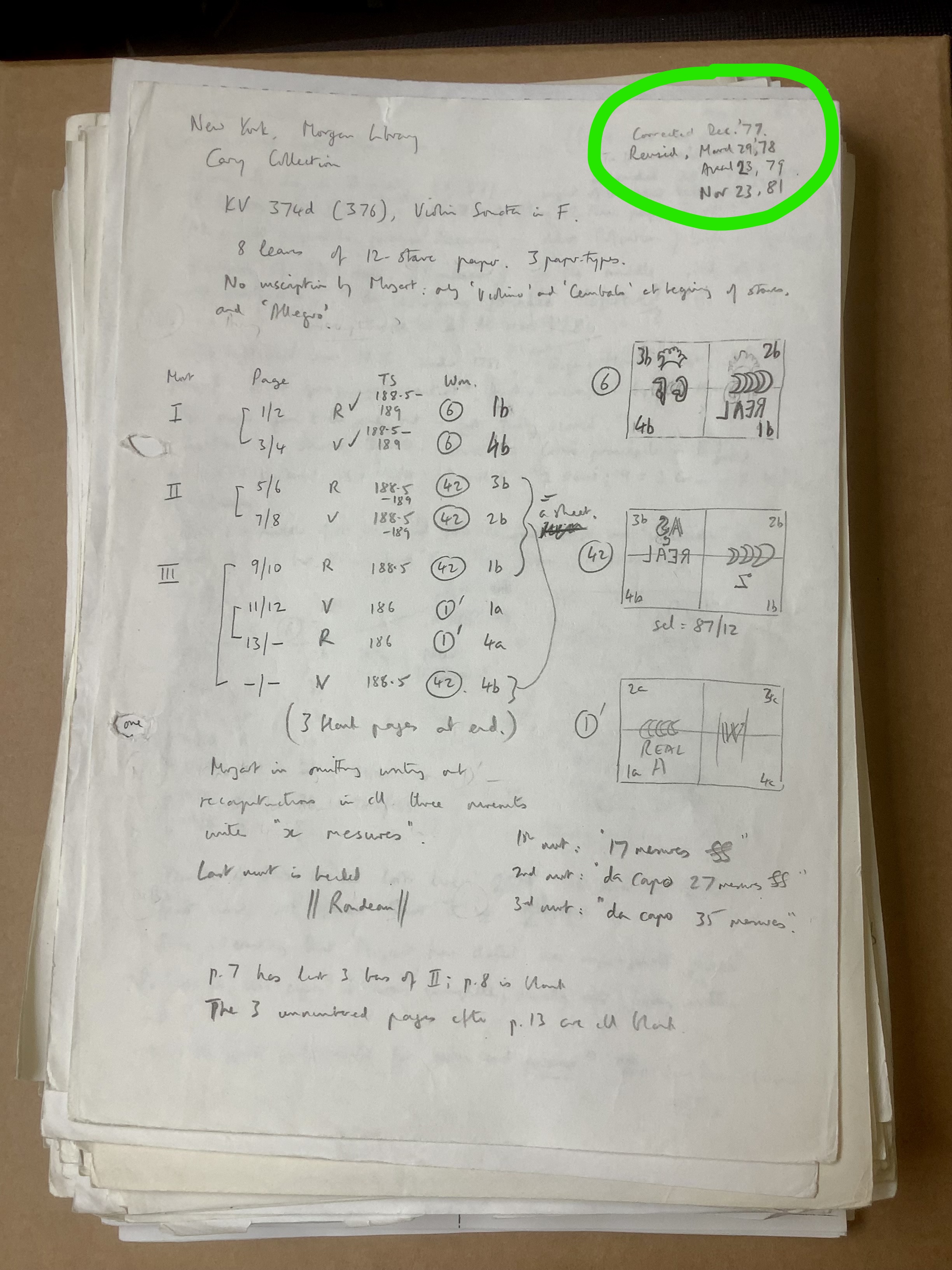 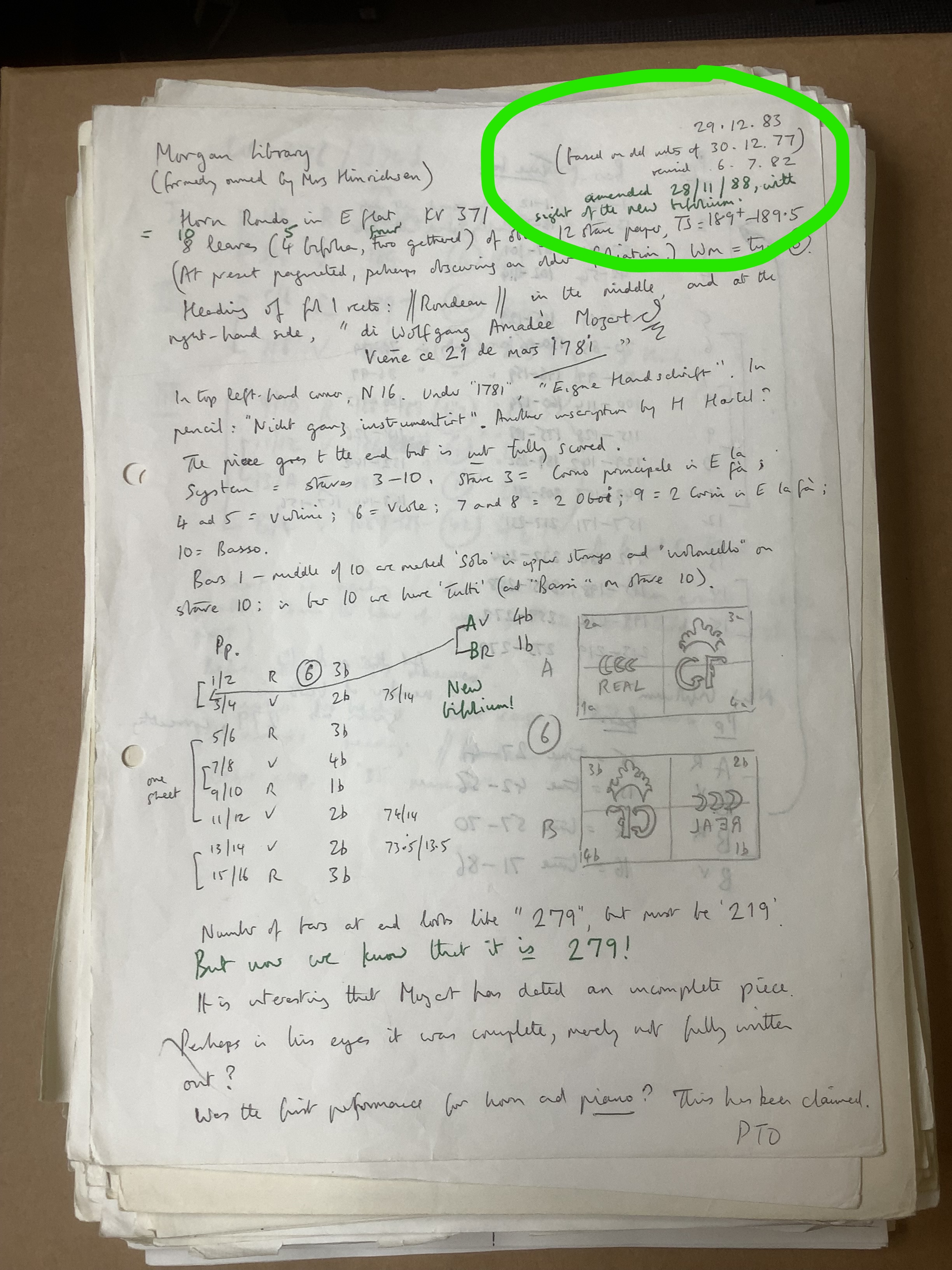 The Tyson archive, now catalogued online, also contains a great number of reproductions of music manuscripts, both autographs and copies.  Many of them, however, offer no clues as to the identity of the works or indeed the composers. Unfortunately, the scope of this music-cataloguing project did not allow for identifying the vast quantities of photocopies, photographs, and microfilms of the various manuscripts. It would take a significant amount of detective work to identify and match the reproductions with their originals. We would welcome any offers of help in this respect if anyone would be up for the challenge!