Another wonderful list of foodstuffs from the Clarendon collection! 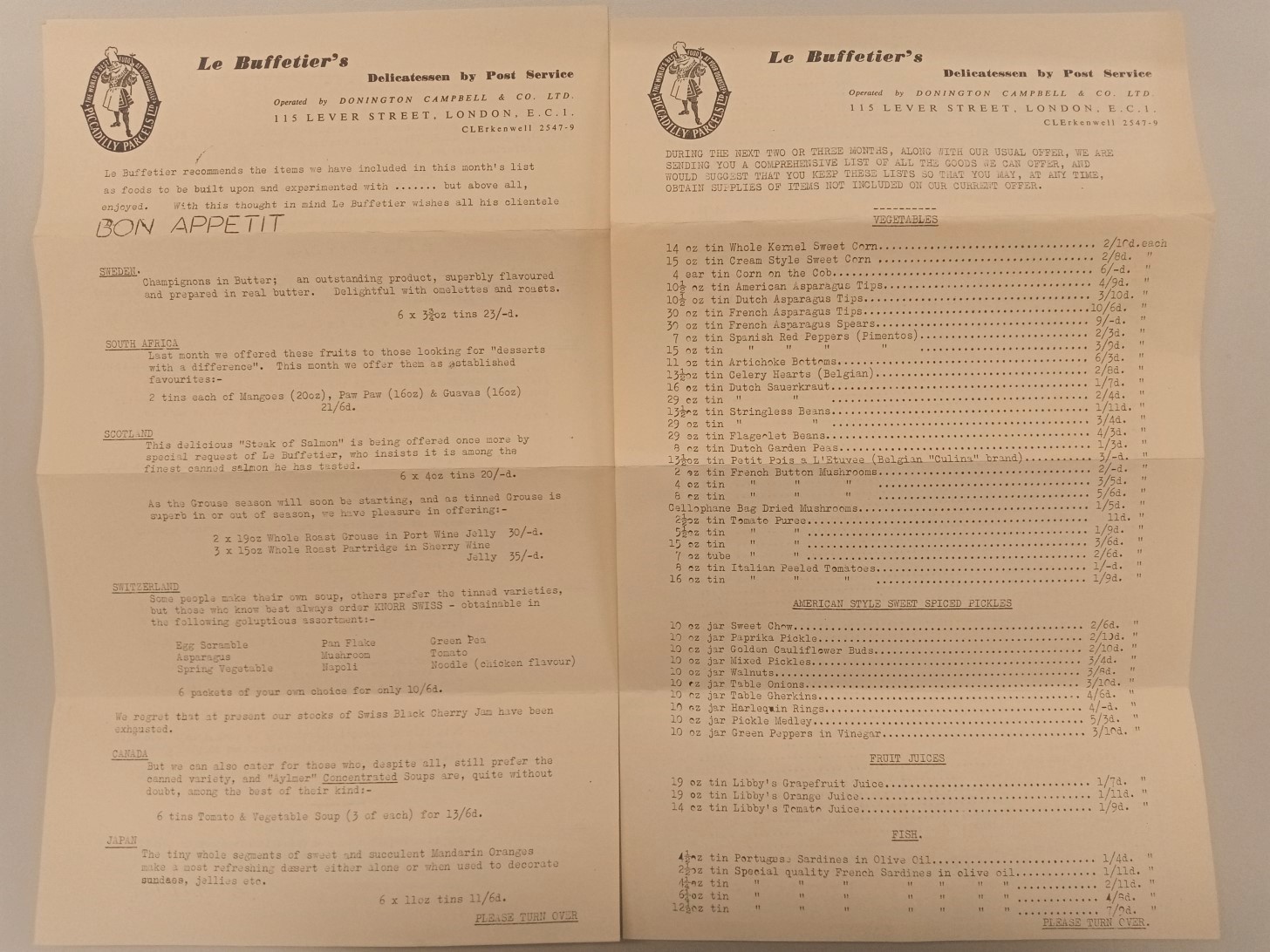 This plain but inspiring catalogue is the September 1954 list of foods available from the London postal delicatessan Le Buffetier’s (Piccadilly Parcels Ltd: “The World’s Best Food At Your Doorstep”). It’s a four-page cornucopia of exotic tinned and jarred foods from countries ranging from Denmark to China and it’s both modern (food by post!) and deeply retro. Foie gras aside, just about everything listed is something you now wander past in the average supermarket but in 1954 it was expensive deli fare. For well-off, cosmopolitan British customers like Verena Villiers, Countess of Clarendon, who had experienced foreign travel and foreign postings, it may have been the only way to taste the foods that they had grown to love.

1954 was also the last year of food rationing, and unless Le Buffetier’s customers had black market sources or kind overseas friends to pay companies like Piccadilly Food Parcels to send them care packages (as in this 1948 advertisement in a South African newsletter, PDF, page 26), this could have been the first time they had had access to these delicacies in the 14 years since rationing was introduced. (Verena Villiers did, in fact, have kind overseas friends sending her food parcels from abroad, including eggs, breakfast tea and bacon from Canada; vitamin-enriched margarine, lard, and tinned beef from South Africa via Denmark; and cake from New Zealand.)

From South Africa, where the Countess of Clarendon lived in the 1930s with her husband, then Governor-General, Le Buffetier’s offered tinned rock lobster, as well as tins of mangoes, paw paw and guavas. (‘Last month we offered these fruits to those looking for “desserts with a difference”. This month we offer them as established favourites’.)

The list of vegetables on offer, meanwhile, included up-market things like artichoke bottoms but also the now incredibly prosaic tinned sweetcorn, tomato puree and Italian peeled tomatoes. Today, a standard 400g/14oz tin of Italian peeled plum tomatoes will set you back 40p in Sainsbury’s, and you can buy them for less. In 1954, a 16oz tin was 1s 9d, or a little over £2 in 2017 money. 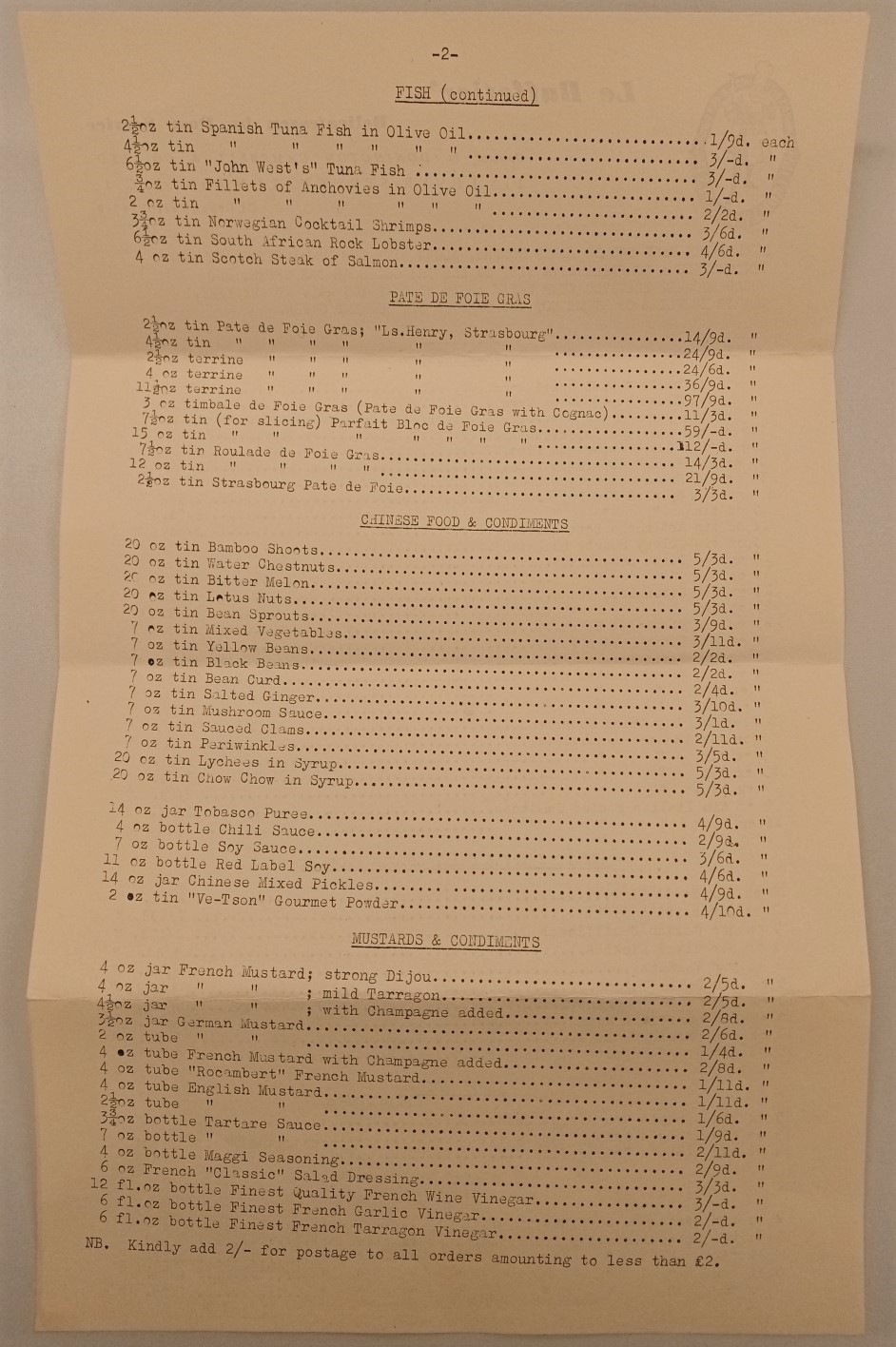 And those humble tinned tomatoes were among the cheapest items on offer. In their Chinese food and condiments section, a 7oz bottle of soy sauce was 3s6d (roughly £4.18), or you could introduce more umami to your food with “Ve-Tson” gourmet powder (you can still buy Ve-tsin gourmet powder, aka monosodium glutamate, or MSG) which would set you back 4s10d, or £5.77.

The list includes other brands that we recognise today, like Knorr Swiss soup, which in 1954 you could enjoy in a range of flavours that outshines 2021, including egg scramble, napoli and asparagus, as well as the still-available chicken noodle and spring vegetable. The price is startling though: 6 packets for 10s6d, or £12.53. (This part of the list also introduced me to the word ‘goluptious’, which means delightful or luscious. Use it in a sentence today!)

Also exotic today, and very reminiscent of TV chef Fanny Cradock, who made her TV debut in 1955 and loved a piping bag, is the egg mayonnaise from Germany: ‘this item of exceptional quality is packed in a tube with star shaped opening for decorating and completing cold dishes’ (four tubes cost 12s, or £14.32).

It’s a lovely, evocative glimpse at 1950s food culture, and a heady reminder of the ways British tastes, and supply logistics, have transformed over the past 70 years.