Did we just find Victorian condoms in the Clarendon archive?

Emptying out a leather wallet found with a box of mainly 1850s letters sent to the 4th Earl of Clarendon, I came across a few stray items: a bad sketch of a woman called Josephine, a scrap of newspaper [*see an important update at the end!], and some folded tissue. It’s not unusual to find scrumpled bits of tissue paper in archives, and sometimes that tissue is wrapping something precious, so it’s always worth investigating.

This tissue struck me as unusual, however – what caught my eye was the shaped and curved edge, and the tiny hint of ribbon. Was this a folded glove, perhaps? 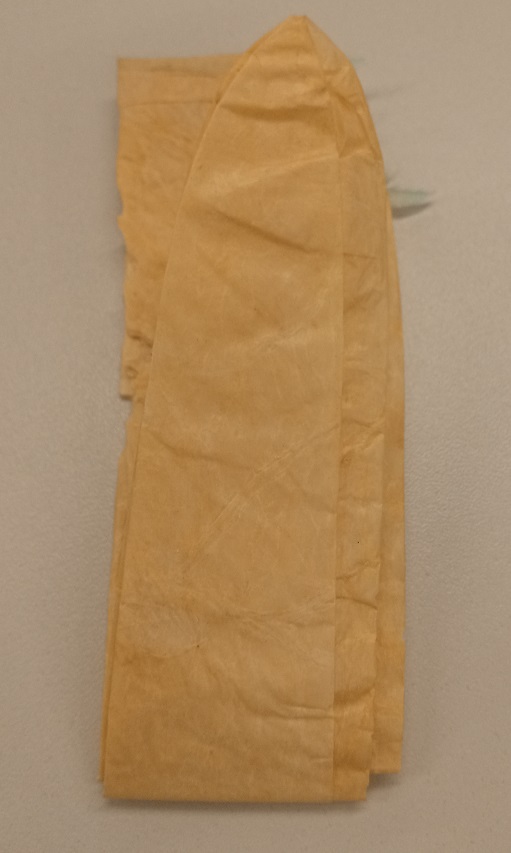 The tissue was folded in half, lengthwise. When I unfolded it, it was immediately clear: not a glove, not unless you wanted to cover only one (very long!) finger at a time.

Instead there were four, individual, 8 inch/20cm-long tubes. For each, one end has been skillfully shaped, cut and sealed into a three dimensional dome, like a fingertip on a glove. The other end of each tube is fully open, and a pale blue ribbon drawstring is neatly tucked into a narrow hem around the circumference of each opening.

Unfolded length-wise, and 8 inches, or 20cm long (with nibbles along one edge)

And then I unfolded one width-wise too, revealing the full 2.5 inch diameter of the opening. The yellowed, translucent, tissue-like material, which is close to onion-skin fine, has torn in a few places where it has been folded for more than a century.

Unfolded width-wise, revealing the full 2.5 inch diameter, and the dainty ribbon drawstring at the open end.

In fact it’s so delicate and crispy that it’s hard to believe it could have functioned as a barrier or container of any sort, even in its heyday. Looked at with the help of our conservation team’s light box, however, you can see that it’s not tissue at all, but animal intestine, blood vessels and all. In other words, exactly the same stuff as a traditional sausage casing. That means it was once much more supple and durable, and has simply dried out. 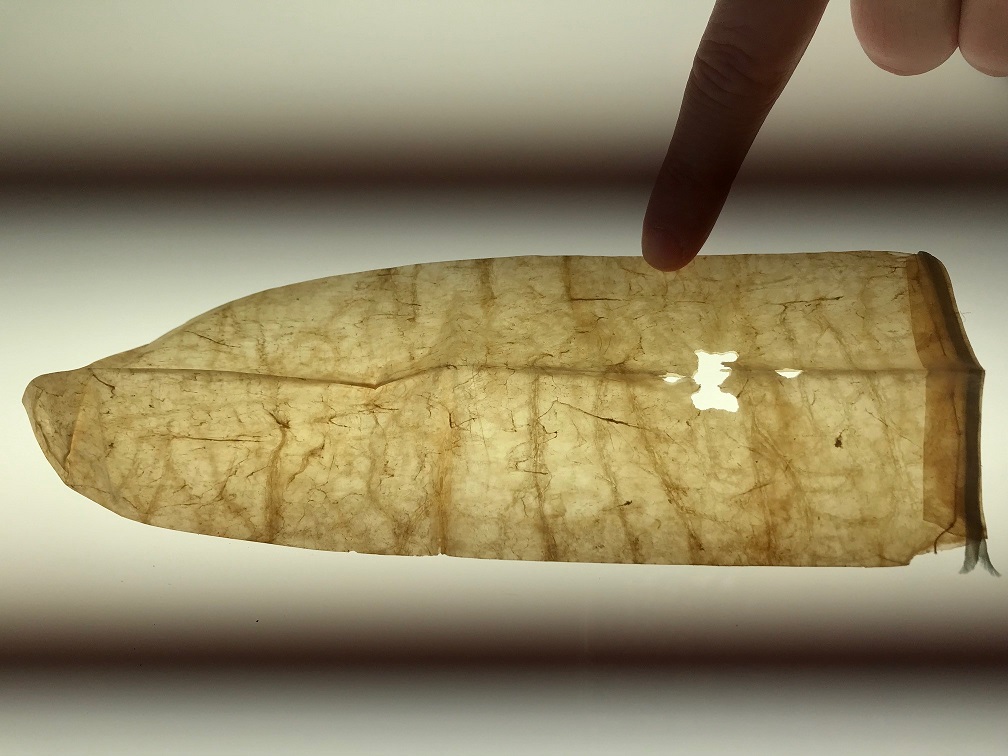 Under a light sheet

Did the 4th Earl stash away some prototype condoms, or could these items have another use? Suggestions very welcome in the comments!

[*An update, Jan 2022: A death notice included in the fragment of newspaper has been dated to November 1821, which might also mean that the condoms are pre-Victorian.]

11 thoughts on “Mystery items in the Clarendon archive”