When I came across a large tranche of letters from Queen Victoria to one of 19th-century Britain’s longtime Foreign Secretaries, George Villiers, 4th Earl of Clarendon (in office 1853-58, 1865-66, 1868-70), I didn’t expect to find one of the most striking things about them to be the queen’s writing paper.

Queen Victoria wrote hundreds of letters to George Villiers over a span of 21 years, mainly about foreign policy matters, but while these letters have been partially published (in a 1907 edition which you can find in the Bodleian Libraries and digitised at Project Gutenberg) what those published transcripts don’t convey is the festive, even gaudy, quality of the queen’s headed writing paper. 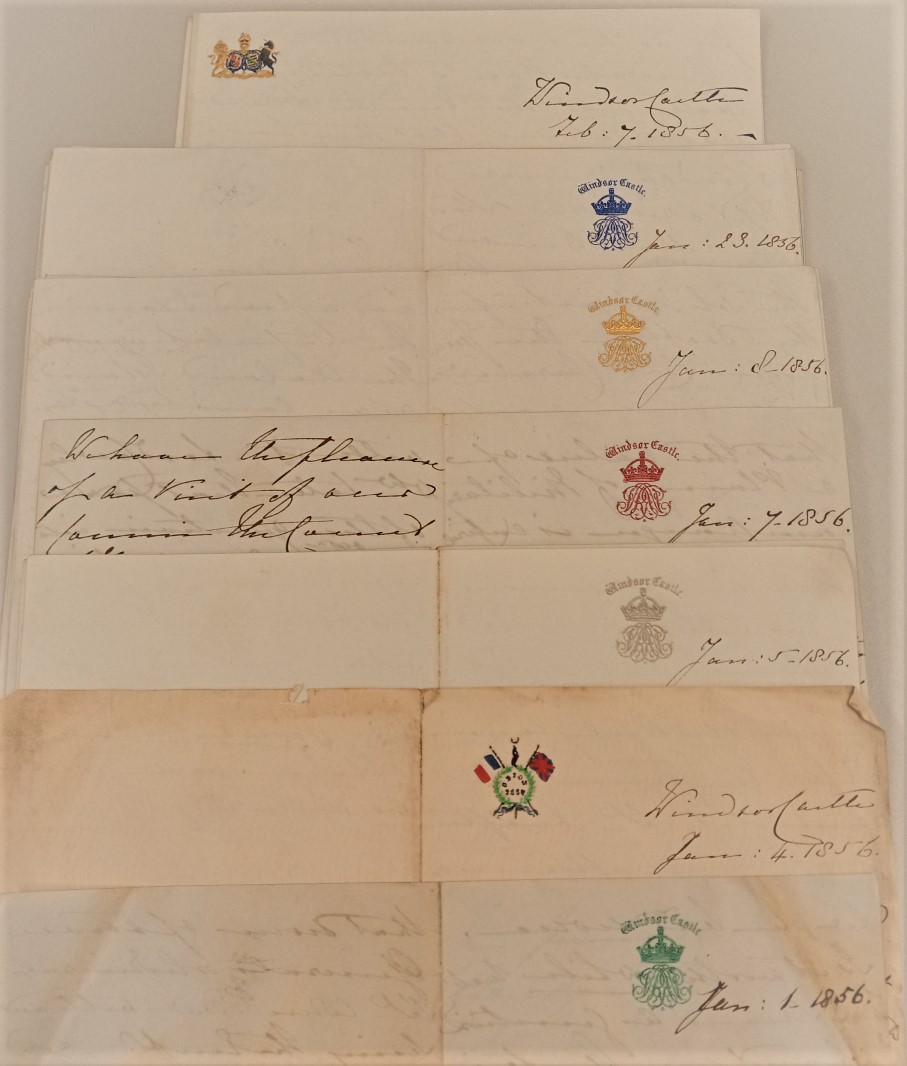 It’s very common for Victorians to use writing paper pre-printed with their address, but I’ve never come across headed paper from one individual in such a range of colours and designs. Queen Victoria lived in many palaces, of course, and one of the pleasures of this long sequence of letters is tracking her as she travels between them, but the fact that she had so many addresses doesn’t fully explain the variety in her writing paper, as you can see to the left in a series of letters which were all written from Windsor Castle between New Year’s Day and February 7 1856 (this is only a sample of the letters she wrote to Villiers that January!). As you can see, there is one standard header for letters from Windsor Castle, but (for one’s amusement?) it comes in green, silver, red, gold and blue. And then there is the unique header featuring the Union Jack and Le Tricolore which commemorates the victory of the Anglo-French alliance in the Crimean War [with thanks to the Bodleian’s Early Modern Manuscripts Curator Mike Webb for that information [1]]. And, right at the top, a gorgeous version of the Royal Arms.

All of these headers are embossed and inked or foil stamped, but this poor photo doesn’t fully capture the sheer quality of the work on the Royal Arms (which looks like either an adaptation of Prince Albert’s coat of arms, or a hybrid coat of arms for both Victoria and Albert). The embossing is so crisp and precise that it’s possible to read the tiny gold-on-gold royal motto in the lower ribbon – Dieu et Mon Droit. 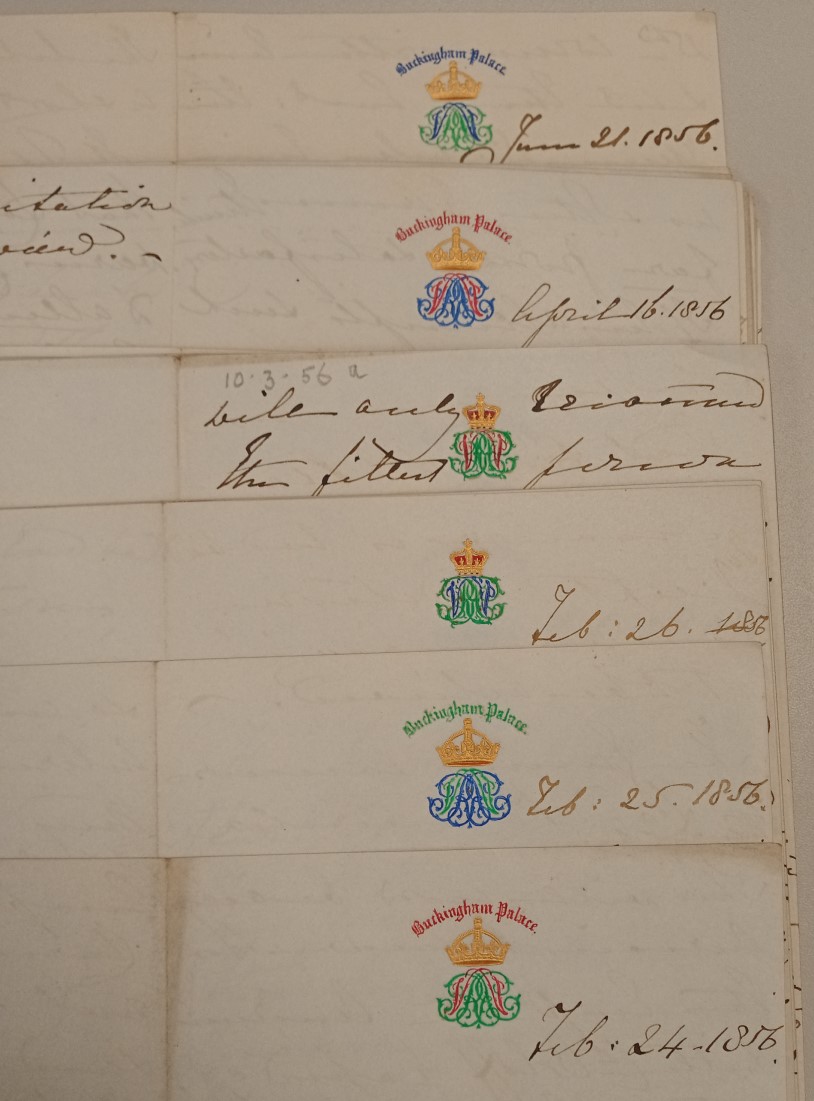 The letters written from other palaces – Balmoral, Buckingham Palace, and Osborne – all show the same lovely range of colours, but Buckingham Palace’s headed writing paper (to the right) also features some elaborate four-tone work that reminds me of a gaudy gothic revival Pugin interior.

(The paper itself has an interesting story, too. Much of it is watermarked “J. Whatman, Turkey Mill“. James Whatman (ably succeeded by his son) was a paper pioneer, the late eighteenth-century inventor of “wove” paper – a mass production method for making high-quality, smooth, unribbed paper which is still used today.) 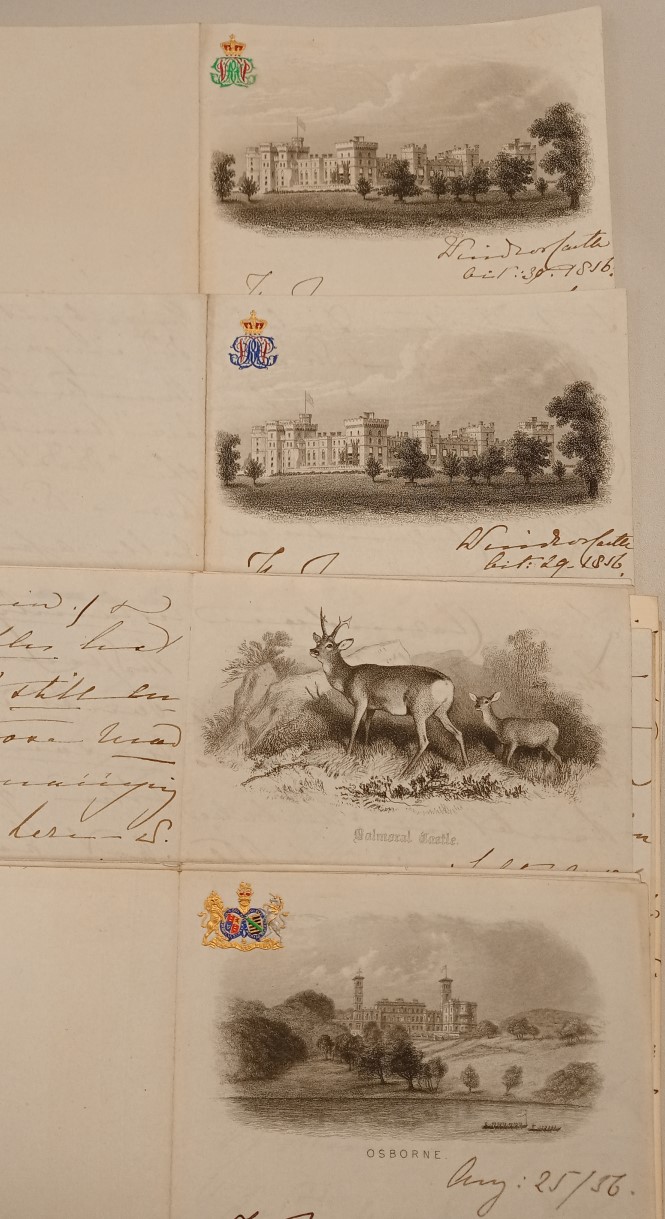 And then there is this, in a completely different style – writing paper featuring actual illustrations of Queen Victoria’s newly-built summer home Osborne House on the Isle of Wight, Windsor Castle, and red deer at her Scottish home, Balmoral Castle (purchased by Prince Albert in 1852), overlaid in some cases with further examples of Queen Victoria’s colourful monogram and the hybrid Royal Arms.

Beautiful, colourful embossing and decorative prints, however, did not survive the Victorian cult of mourning. All the letters written from mid November to December 1856 (as well as most of 1857), coincidentally while Victoria was pregnant with her last child, Beatrice, feature narrow black borders around every edge of the paper, and royal monograms and addresses embossed in black. The stationery that Queen Victoria used for letters to the 4th Earl of Clarendon reveals fairly frequent bouts of formal mourning but until 1861, as you can see below in the two letters from November 1861, the queen was always willing to revert to more decorative headed papers. 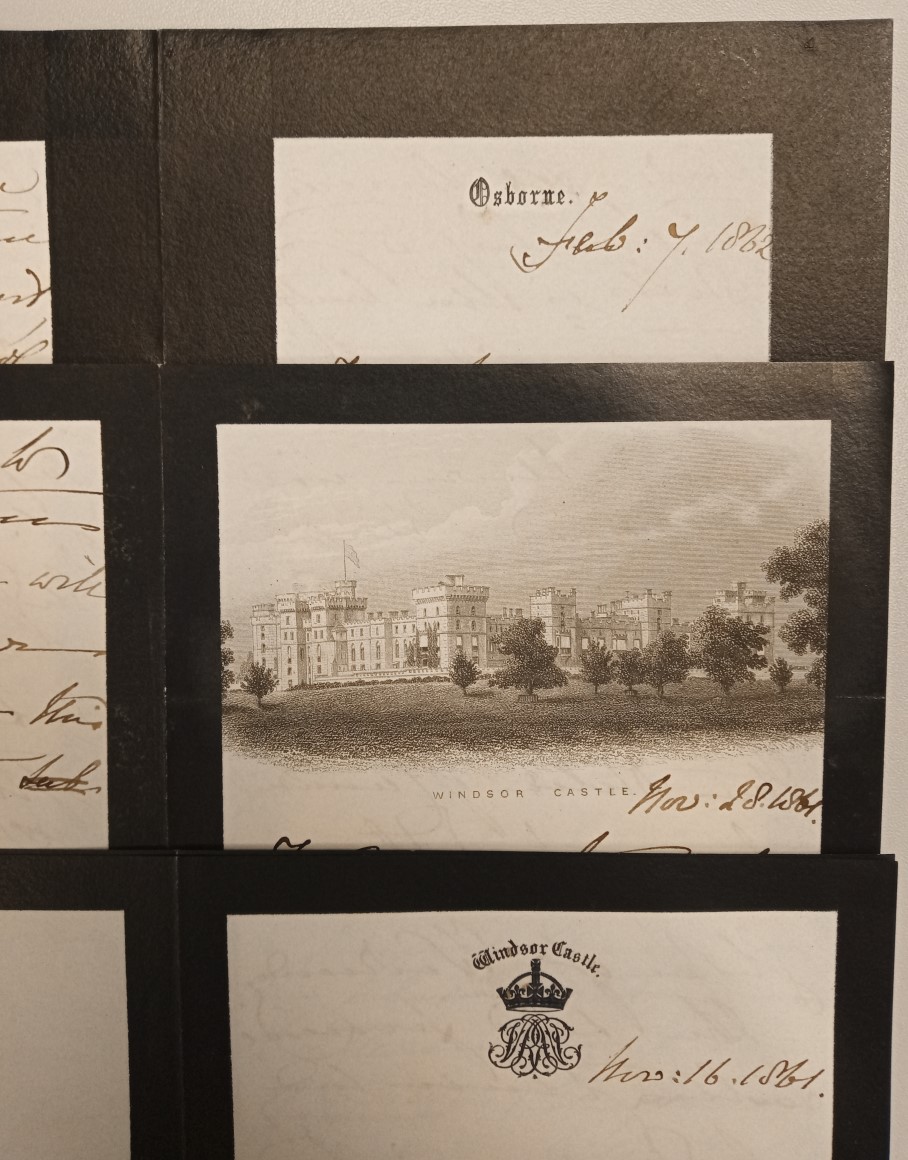 After the death of her husband Prince Albert in December 1861, however, there was no more decoration, and no more colour.

The top letter in the image to the right (7 February 1862), which was the first letter Queen Victoria wrote to the Earl of Clarendon after Prince Albert’s death, shows mourning borders that have ballooned in size, doubling in width to take up a third of the page. In fact, the borders have turned so thick and so deep that the black ink comes off on your hands.

Queen Victoria’s deep private and public mourning for Prince Albert would be a dominant feature of the next 40 years of her life and it visibly manifested at every possible scale, from enormous statues like the Prince Albert Memorial, to commemorative buildings like the Royal Albert Hall, to her famously black wardrobe, but also, as you can see right here, in the most prosaic, every day and flimsy of stuff: the queen’s writing paper.

[1] A number of letters written from Paris during the Crimean War peace negotiations by Katharine Villiers, Lady Clarendon, to her sister-in-law Theresa Lewis have been transcribed online.

[With thanks to eagle-eyed readers who spotted how many times I misspelled stationery!]

2 thoughts on “Her Majesty’s stationery”