Encaenia hasn’t always been the solemn and serious ceremony it is now. For much of its life, it was the victim of some very bad behaviour – some of which was formally sanctioned by the University, but most of which was not. Until the Sheldonian Theatre was built in 1669, the Act (the predecessor of Encaenia) took place at St Mary’s, the University Church. By the late fifteenth century, however, this, once sober occasion had begun to turn into a much less respectable and rather outrageous event.

As well as the conferral of honorary degrees, the Act (effectively the University’s annual graduation ceremony) also contained a theatrical element absent from the modern Encaenia ceremony. It attracted travelling players and musical performers, and was livelier and more exuberant than it is now. Part of the exuberance came from a character at the event who was appointed by the University almost deliberately to lower the tone. The Terrae Filius (‘son of the earth’, meaning someone of very lowly origins) was an anonymous speaker whose role was to poke fun at the University and give a satirical speech about the honorands.

Whilst originally a solemn and serious participant in the proceedings, the Terrae Filius’s speech gradually descended over the years into downright rudeness. Although the University officially tolerated this licensed outrageousness, some of the individuals present (especially those on the receiving end of the rudeness) did not. Some speeches were so offensive that the Terrae Filius was attacked and beaten afterwards. In other years the speech gives were expelled from the University, forced to retract their speech, and even arrested on the spot and taken to Oxford’s bocardo prison.

The theatricals and the insults of the Terrae Filius appealed to many undergraduates and visitors from outside Oxford and the came to the Act in large numbers. The crowds and the general spirit of licentiousness proved a dangerous cocktail with undergraduates seeing the event as an opportunity to misbehave. They made noises which disrupted the ceremony (‘Hummings and other clamorous noyses’), were rude to the honorands, and deliberately sat in the wrong seats, ie those set aside for more senior University individuals. The University started having to issue notices to undergraduates warning them of the consequences of their bad behaviour. 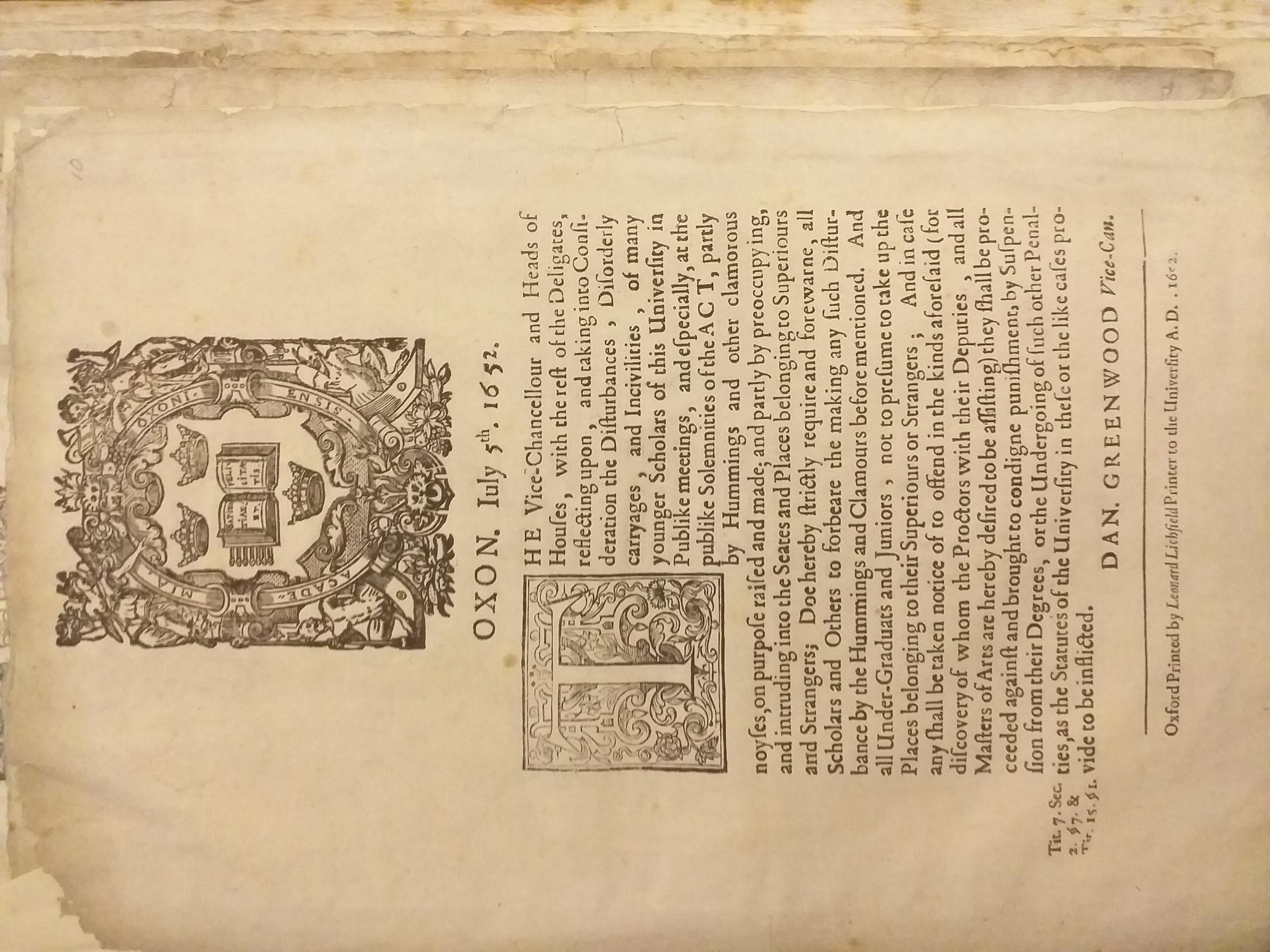 The Act became such an undesirable part of the University’s calendar that by the late seventeenth century it wasn’t even held every year. It seems that the University looked for any excuse not to have to hold it. Some years there were ‘not enough honorands’; other years, it wasn’t held for fear of sparking political disturbances. The event had become so rowdy that many thought it no longer appropriate to be held in a church. As a result, the Sheldonian Theatre was built and the Act moved there in 1670.

The Act was held only three times in the first half of the eighteenth century: in 1703, 1713 and 1733. The Terrae Filius didn’t even speak at the 1713 Act, his speech apparently having been burnt. His very last appearance in 1763 was in a much reduced, and heavily-censored, role.

The 1733 Act, famous for involving the composer George Frideric Handel, was the last traditional Act to take place. It was replaced shortly afterwards by the new annual Encaenia ceremony, a much-reduced version of the Act. By the beginning of the nineteenth century, Encaenia (also known as the Commemoration) was becoming an important part of the University calendar again. Unfortunately rowdy undergraduate behaviour was also becoming a regular part of Encaenia. The move to the Sheldonian had not curbed the behaviour, it had simply moved it to a new location. Student rowdiness was such a part of the tradition of the event that although the Terrae Filius had long been consigned to history, his spirit lived on. 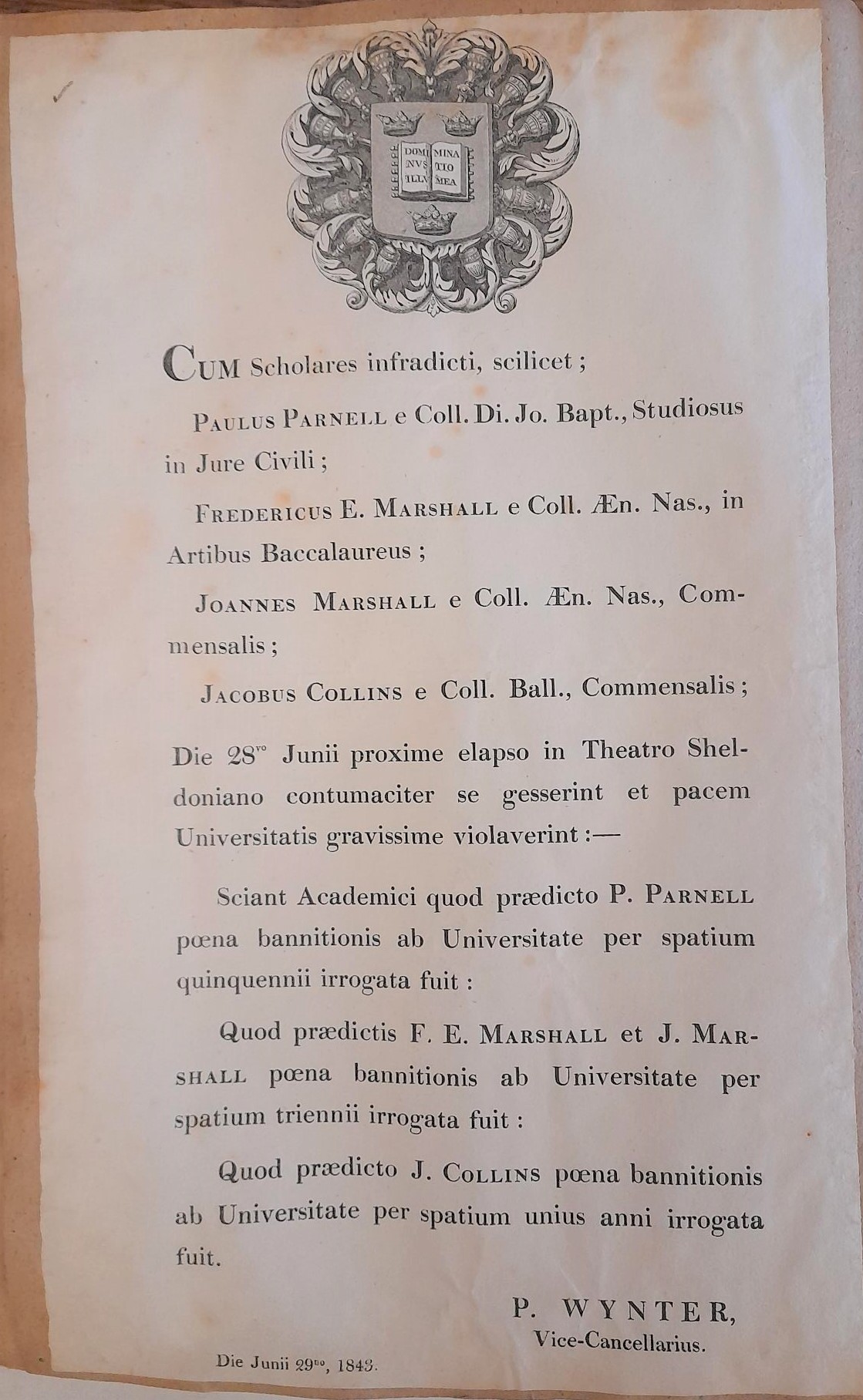 In June 1843, four students were banished from the University for between one and five years each for ‘grievous violation of the peace’ at the Sheldonian Theatre. The University issued numerous notices over the following decades chastising the undergraduates for their continuing bad behaviour, repeated without fail each Encaenia. 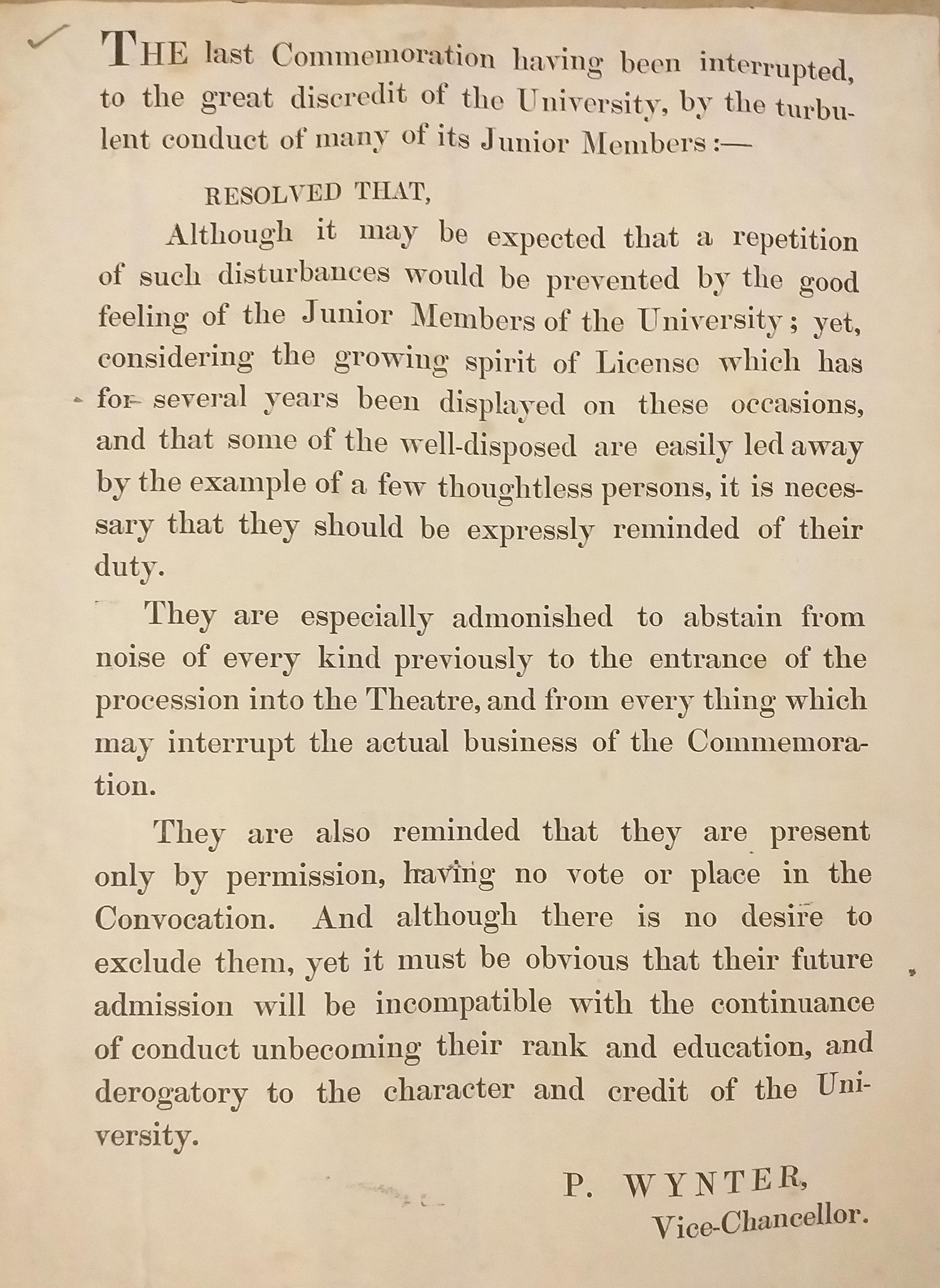 The notices reminded undergraduates that they had no formal right to even be at the ceremony. Encaenia was technically a meeting of Convocation (the body of MAs and higher degree holders of the University) of which undergraduates were not members. 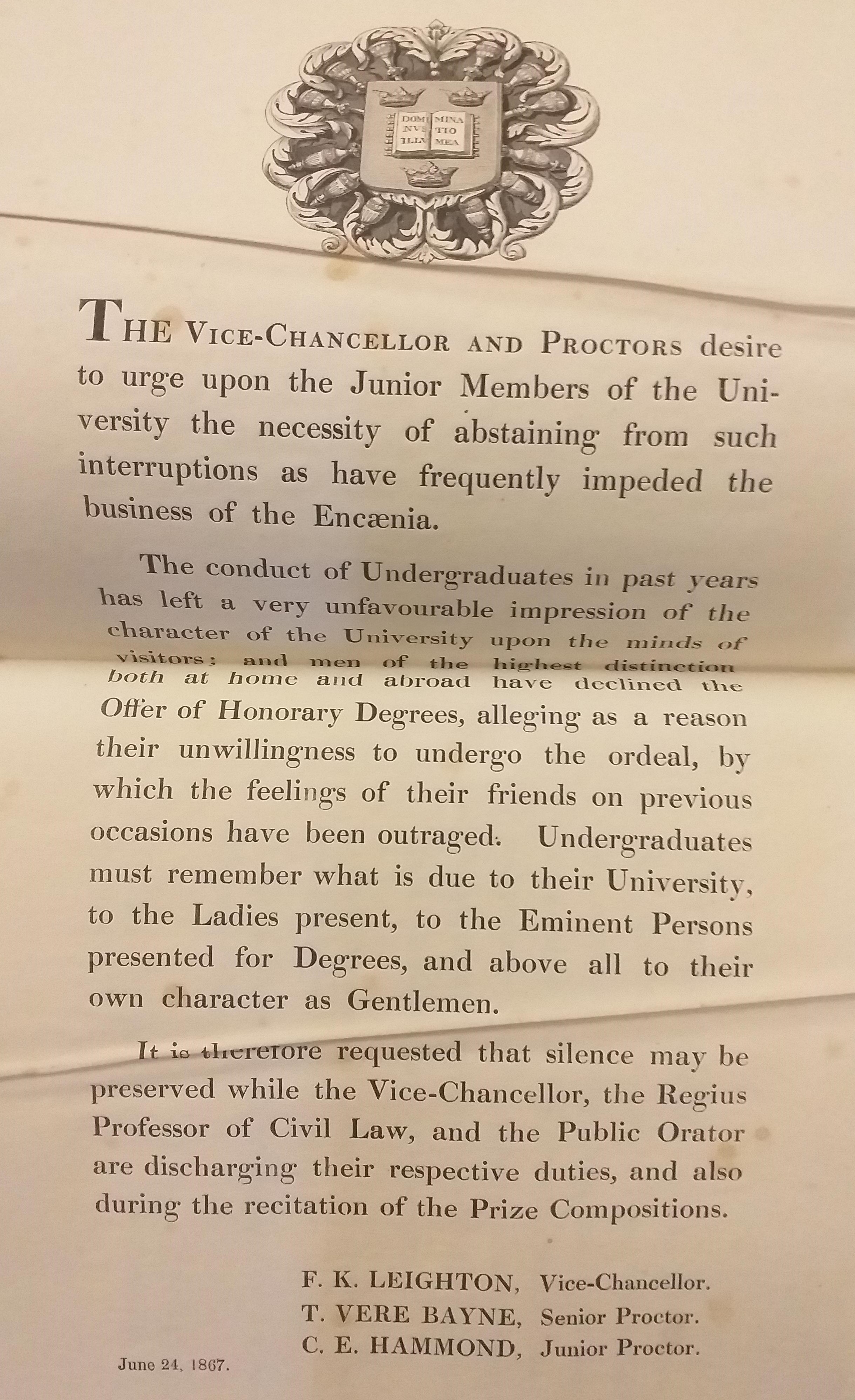 By the time Encaenia 1867 was about to take place, the University was issuing strongly-worded notices to its undergraduates about the impact of their behaviour. It was not only bringing the University into disrepute, it was even, allegedly, putting people off accepting an honorary degree from Oxford. They just couldn’t face the ‘ordeal’ of it.

The problem of undergraduates’ bad behaviours at Encaenia was finally solved in the 1870s. The Curators of the Sheldonian Theatre were established in 1872, a direct result of the Encaenia disturbances. A new body set up to take responsibility of the Sheldonian, one of its first acts was to tackle the issue of crowd control at Encaenia. Until that time, entry to the Sheldonian had not been restricted in any way and any member of the University, undergraduate or otherwise, could turn up. In 1872 the Curators decided to admit undergraduates to Encaenia by ticket only. In 1878 they went even further, deciding on 30 May that year that undergraduates would no longer be allowed at Encaenia. Removing undergraduates from the ceremony entirely finally enabled the University to bring Encaenia back under control and into the realms of respectability.

For more information about the chequered history of the Terrae Filius, see the article by Bromley Smith and Douglas Ehninger ‘The Terrafilial disputations at Oxford’ at  https://www.tandfonline.com/doi/abs/10.1080/00335635009381578

Further information about the Encaenia ceremony today can be found on the University’s website at https://www.ox.ac.uk/news-and-events/The-University-Year/Encaenia