As the University’s financial year draws to a close (it runs from 1 August to 31 July), this month’s University Archives blog takes a look at how the University managed its finances in years past. Financial records might, at first sight, seem a little dull, but take a closer look and they can yield some unexpectedly fascinating and intriguing details.

Until 1868, the Vice-Chancellor was personally responsible for maintaining the University’s accounts. That seems an improbably large amount of work for one person, but it wasn’t as onerous as you might think. The central University administration had been, until the late nineteenth century, very small; the only senior officers were the Vice-Chancellor, Registrar and two Proctors. The business of that central administration was also very small – most went on in colleges, independent bodies which are not part of the central University.

The Vice-Chancellor maintained a series of volumes of accounts. These were the successors to rolls of accounts which the Proctors had kept during the fifteenth century. The volumes, written in a combination of Latin and English, contained neat and well-organised summary accounts detailing University income and expenditure for the preceding financial year. Just one year’s worth of these accounts can shed some very interesting light on what was going on at the University at that time.

The money received in that year was much as you’d expect. Written in Latin, the accounts record rent received from tenants and other income from the University’s estates and investments, income from University fees and benefactions. The final line in the list of receipts is rather intriguing however. This records the sum of one pound and ten shilings received from ‘ab Anonymo qui Nomen suum celatum Voluit’, ie from an anonymous man who wanted his name concealed. Was this an anonymous benefaction from someone too modest to publicise their name, or something more controversial? Unfortunately we’ll probably never know. 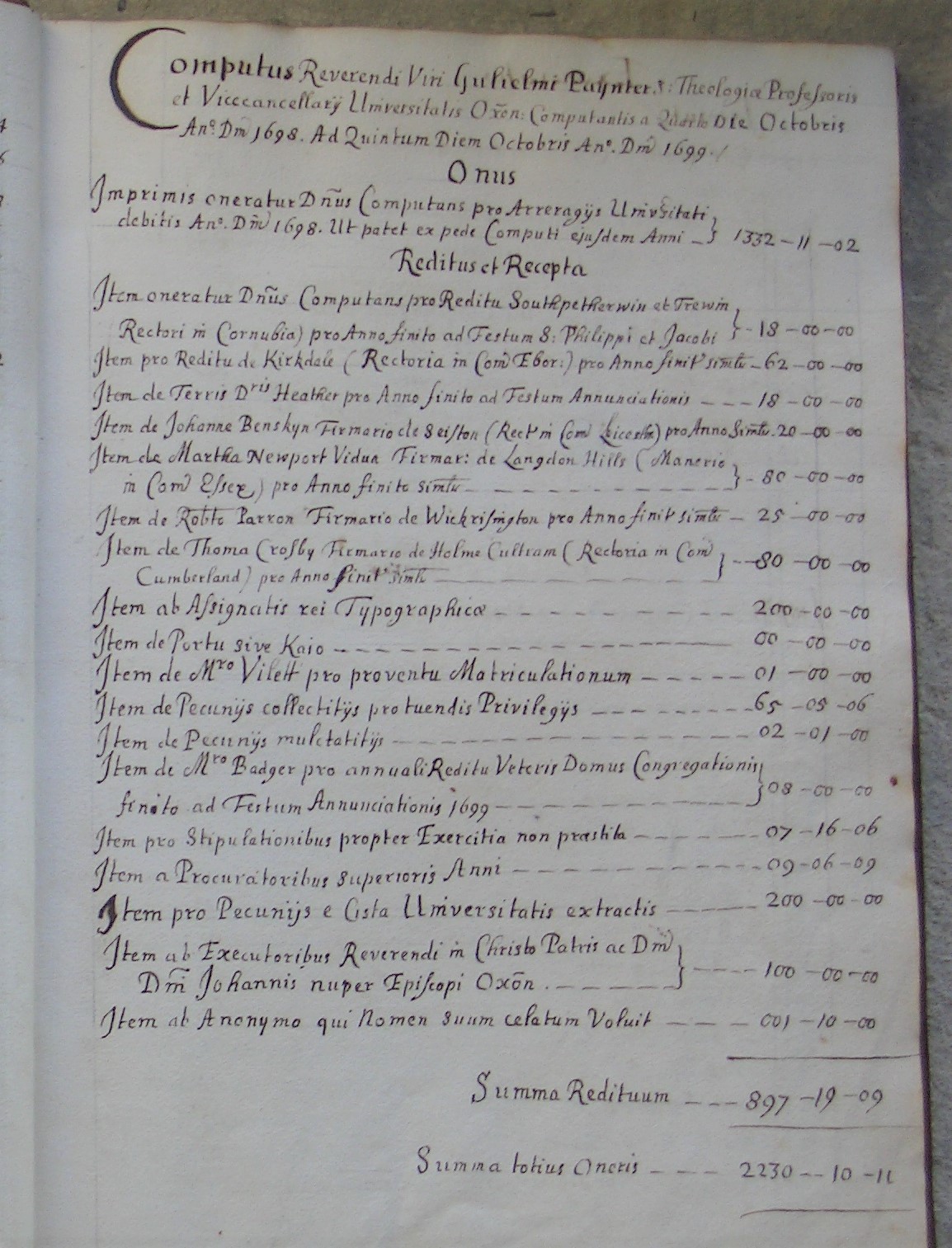 Then there are the lists of ordinary expenses. Also in Latin, they are mostly regular salary payments, but even these can reveal more then they first appear. One particularly large stipend is paid to the Keeper of the Archives, or ‘Custos Archivorum’ to give him his Latin title (meaning ‘guardian of the archives’). In this year, the Keeper, Dr John Wallis, was paid the princely sum of forty pounds. Just two lines below, the stipend of Dr Thomas Hyde ‘bibliothecario’ (ie Bodley’s Librarian) is given. This is the relatively measly sum of six pounds, thirteen shillings and fourpence. Why the discrepancy when both might appear to us to be doing similar kinds of jobs? Well, that was due to the differing roles of Drs Wallis and Hyde and the importance which the University gave to one and not the other.

The Keeper of the Archives was the University’s chief weapon in its constant battles with Oxford city. A new post created in 1634, the Keeper took a prominent, hands-on role in the University’s many disputes with the city. He was responsible for gathering written evidence and providing the documents the University needed to fight its case in court to protect its privileges and rights within Oxford. The Keeper was a key part of the University’s defensive arsenal against its ancient rival, and one of the most significant officers in the seventeenth-century University after the Chancellor, Vice-Chancellor and Proctors. His stipend reflected that importance and he was remunerated accordingly.

Bodley’s Librarian, on the other hand, responsible since 1602 for the day to day running of the Bodleian Library, was not seen in quite the same way. More of an administrator than a University champion, his much smaller stipend reflected this perceived lower status. 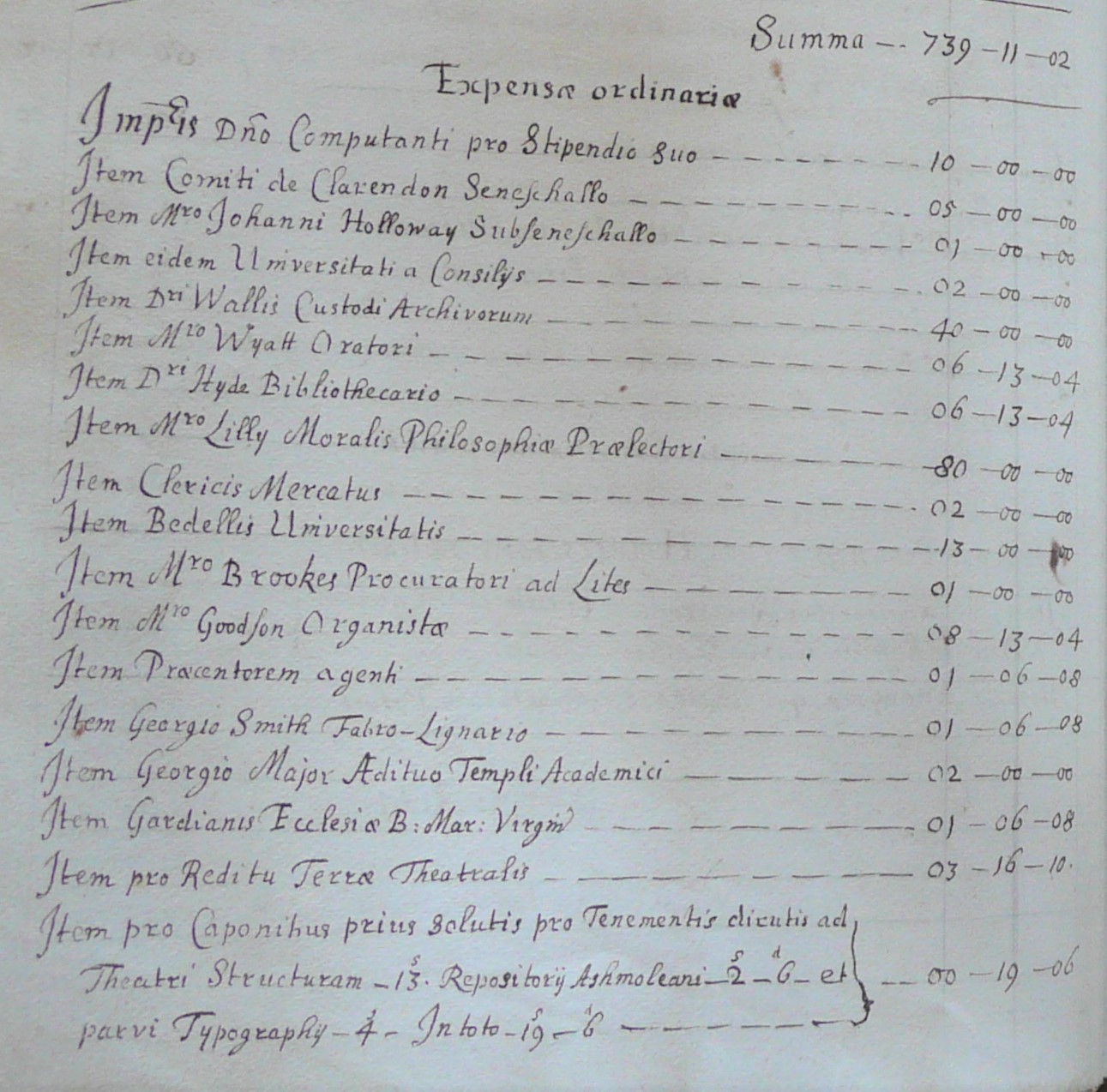 For the list of extraordinary expenses, the volume switches into English – maybe because of the more random and miscellaneous nature of the transactions involved. There are a range of one-off payments to individuals doing work for the University (carriers, printers and the ‘University Ingraver’), ad hoc payments to University staff (eg the Musick Master), and payments for work being done around the University, such as repair of the organ at St Mary’s Church.

The payments also allude to other things going on in the country at the time which had an impact on the University. There is an oblique reference to the credit crisis in England in the late 1690s, the University having lost money ‘by the fall of guinnys’ [guineas]. 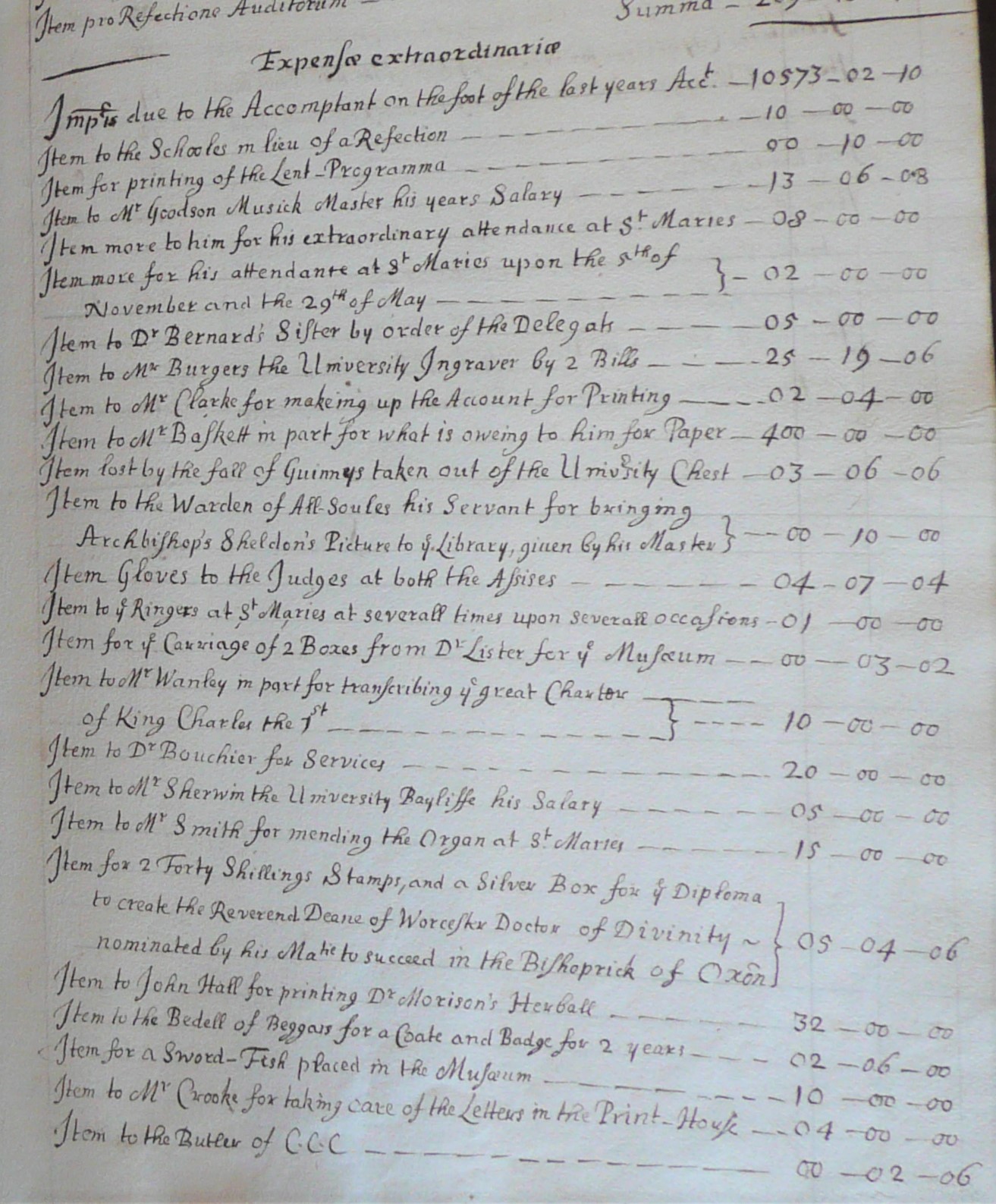 On the line below is a record of a payment by the University for the sizeable sum of £10 for a ‘swordfish placed in the Museum’. This would have been the Old Ashmolean Museum, opened only 16 years before where the Museum of the History of Science is now. Quite why the University wanted a swordfish, and whatever happened to it, is not known.

Again there are hints at much more involved and interesting stories in these seemingly uninspiring lists of payments. The very last extraordinary expense was the sum of fifteen pounds paid to ‘Mr Sherwin the University Bayliffe for his extraordinary paines about the Repaires and Buildings in the University’. Who knows what ‘extraordinary paines’ this man went to. Unfortunately there is no other record in the Archives here to show exactly what Mr Sherwin had battled with.

The University’s financial management was taken over from the Vice-Chancellor in 1868 by the Curators of the University Chest. The amount of work had increased by this time and the University had received criticism during the 1860s about how it managed its finances. In an attempt to find a more robust way of controlling its money, it created a new body of nine persons known as the Curators of the Chest (‘Curatores cistae academicae’) together with a new post of Secretary to the Chest to support them. The Secretary was the first professional non-academic University officer, although not, at that point, a professional accountant. The Secretary of the Chest is now the University’s Director of Finance.

One thought on “Mysterious donors, salaries and swordfish – a year in the life of the University’s accounts”