Today marks the centenary of the birth of the poet Philip Larkin, who was born in Coventry on 9th August 1922.

Larkin was educated at King Henry VIII School in Coventry and at St John’s College, Oxford, where he read English language and literature, graduating with a first-class degree in 1943. Whilst many generations who studied his poems at school will remember him first and foremost as a poet, he also had a long and successful career as a librarian, most notably at the University of Hull where he worked for the last thirty years of his life. 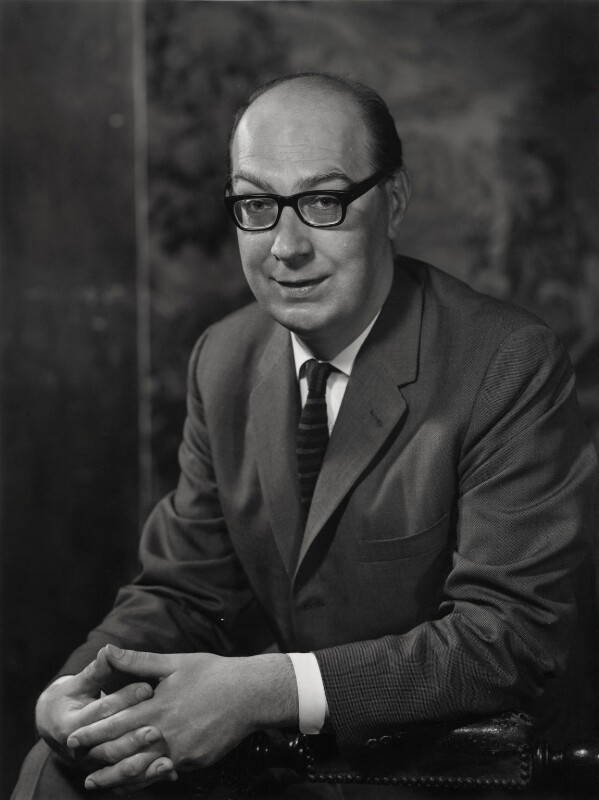 Larkin’s association with the Bodleian Library started in his undergraduate years, and continued throughout his creative and professional life. On his death, Larkin bequeathed the Bodleian several collections of letters. These include letters from: Kingsley Amis, a fellow English student at St John’s who became a life-long friend; the novelist Barbara Pym; and Larkin’s long term friend, lover, and companion, Monica Jones. In 2006, the Bodleian acquired the corresponding letters Larkin wrote to Jones and it is in these letters we get an insight into the creation of one of his most famous poems, An Arundel Tomb.

The tomb that inspired Larkin to write the poem is located in Chichester Cathedral and is now generally thought to be the tomb of Richard FitzAlan, the 10th Earl of Arundel (d.1376) and his second wife, Eleanor of Lancaster (d.1372). Larkin and Monica Jones visited Chichester in January 1956 and his letters to her after their visit refer to the poem in progress (MS. Eng. c. 7413)*.

The letters show that Larkin particularly deliberated over the last verse and the famous oft-quoted last line in particular. On 12th February 1956 (fol. 7), Larkin wrote to Monica saying that he was

absolutely sick of my tomb poem… It’s complete except for the last verse, which I can’t seem to finish: but I can’t feel it is very good, even as it stands. It starts nicely enough, but I think I’ve failed to put over my chief idea of their lasting so long, & in the end being remarkable only for something they hadn’t perhaps meant very seriously.

A postcard to Monica followed, postmarked 21st February (fol. 10), where he gives two alternatives to his last line:

Larkin asks for ‘Comments please’ before rapidly moving on to yesterday’s bout of indigestion. On 26th February (fol. 19v-20r), he wrote that he has ‘about finished the tomb’, the last lines now reading:

Our nearest instinct nearly true:
All that survives of us is love.

Larkin is however still unsure, writing that including ‘almost’ instead of ‘nearest’ and ‘nearly’ in the penultimate line

wouldn’t do if the last line was to start with All: I didn’t think it pretty, but it was more accurate that this one, & I felt an ugly penultimate line would strengthen the last line. Or rather, a “subtle” penult.[imate] line w[oul]d strengthen a “simple” last line. Sea-water mean?

It seems ‘All that’ won out for a time, appearing again in pencil at the end of the typescript draft Larkin sent to Monica (fol. 22). The very fact that these lines are in pencil indicates Larkin was still undecided. On 2nd March, he wrote that he ‘shall ponder the last two lines. I quite like the “almost” set up, but don’t like the “that what” construction it entails’ (fol. 26). 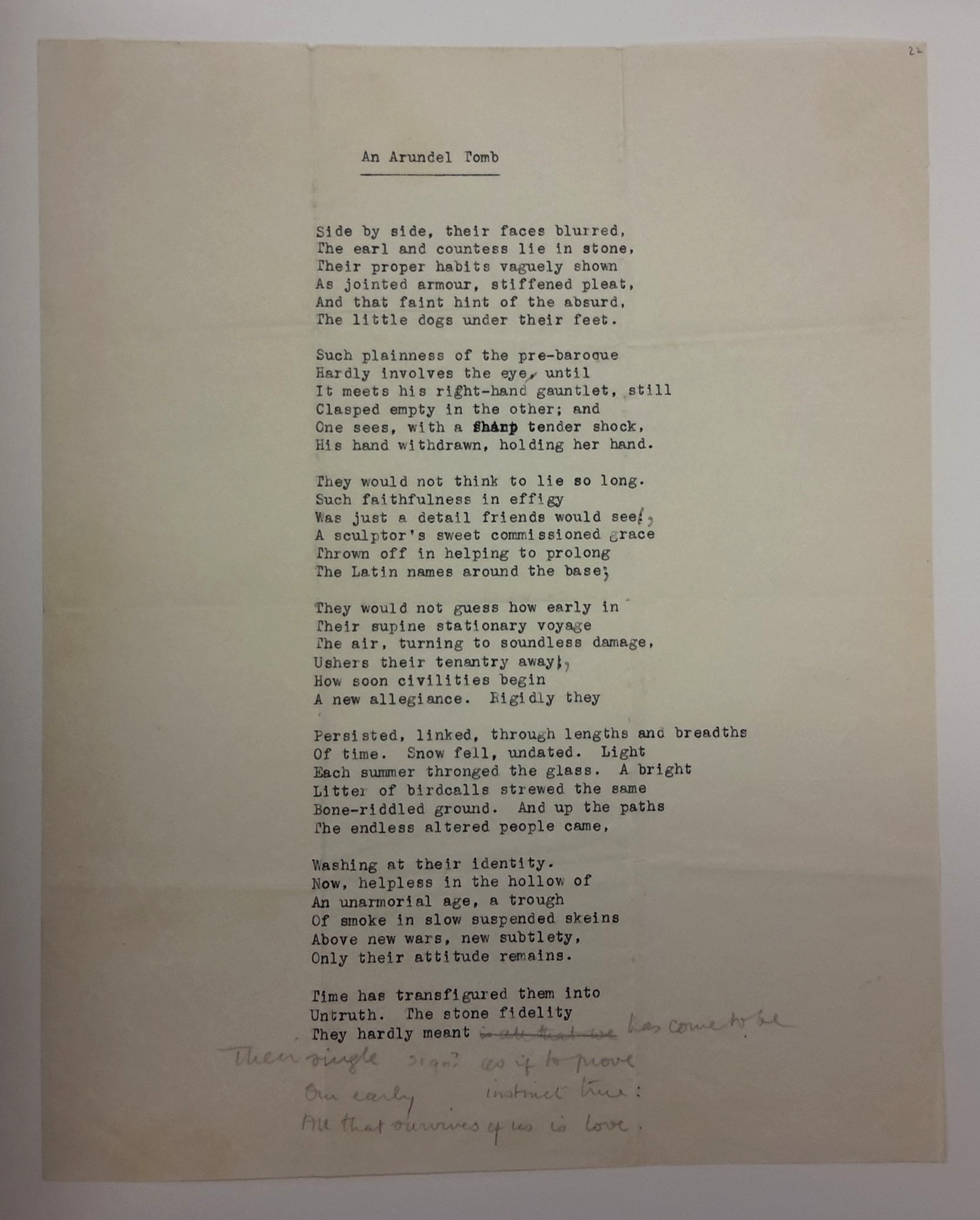 Typescript draft of Philip Larkin’s poem An Arundel Tomb, Oxford, Bodleian Libraries, MS. Eng. c. 7413, fol. 22. By kind permission of The Society of Authors as the Literary Representative of the Estate of Philip Larkin.

In the end, the ‘almost’ won through and the ‘that what’ was avoided:

Our almost-instinct almost true:
What will survive of us is love.

An Arundel Tomb was published in May that year and would go on to be included in Larkin’s 1964 collection The Whitsun Weddings. Whilst possibility not one of his own favourite poems, it is certainly one of his best remembered. The poem was read at Larkin’s memorial service at Westminster Abbey in February 1986 and the two last lines from the poem were inscribed on Larkin’s memorial stone in Poets’ Corner, which was dedicated on 2nd December 2016.

*Unless otherwise stated, all quotes are from letters from Philip Larkin to Monica Jones, Feb 1956-Jul 1956, Oxford, Bodleian Libraries, MS. Eng. c. 7413 and are quoted with the kind permission of The Society of Authors as the Literary Representative of the Estate of Philip Larkin.