The catalogue of the Archive of Peter Landin (1939-2009) computer scientist, academic and gay rights campaigner, is now online.

Landin’s early career was industry based; in 1960 he became the sole employee of  Christopher Strachey who was then working as an independent computing consultant. As Strachey’s research assistant, he was also encouraged to pursue his autonomous research interests alongside writing a compiler to translate the early programming language ‘autocode’ into the machine language of Ferranti’s new Orion machine. Landin’s radical approach was never finished, but underpins compiler writing to this day. He researched and published prolifically on formalising the semantics of language. His career and contribution to advancing programming languages and computer science in general was incredibly pioneering – encompassed by both industry and academic positions in the United States of America, returning to England to hold the position of Emeritus Professor of Queen Mary University of London (formerly known as QMC) and teaching hundreds of students, and publishing a formal description of ALGOL 60 programming language for the International Federation for Information Processing. His abstract thinking and constant discoveries mean that Landin is celebrated as a pioneering computer scientist today.

Early in his vocation Landin also lectured at the 1963 Oxford Computing Laboratory summer school on advances in programming and non-numerical analysis. He spoke on lambda calculus and applicative expressions, which he would later publish papers on. The names on the timetable below read as a ‘Who’s who’ of key figures in the computer programming sphere at the time. 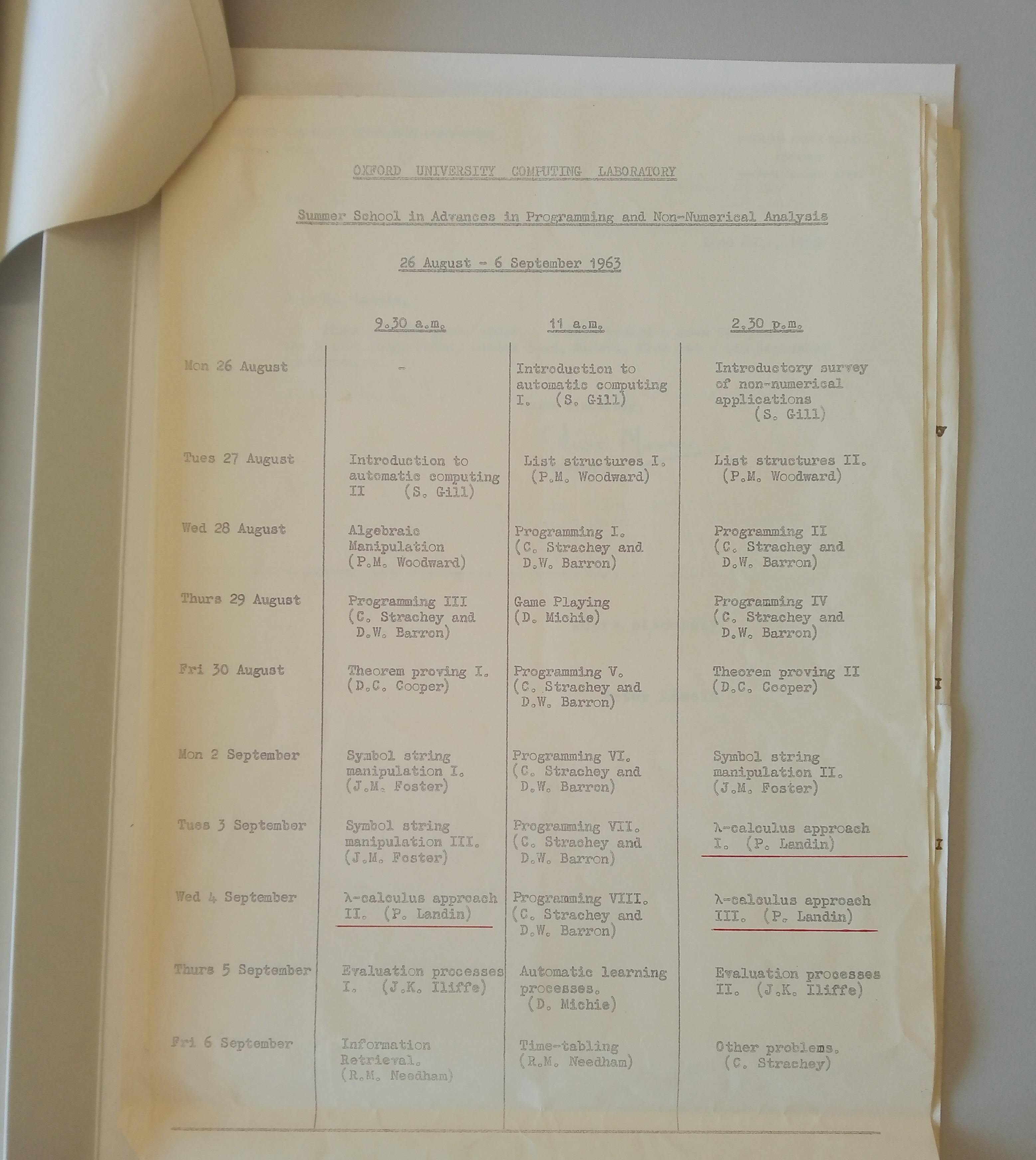 Particularly in the series of work papers, drafts and published works and correspondence, Landin’s conscientious and creatively chaotic work ethic is evident. However, computing was never his entire life [1].  As Landin aged, he became less enthused by computer science, particularly disillusioned at its misuse by large corporations and what he saw as the ‘surveillance state’.  This fed into his lifelong disenchantment with bureaucracy, hierarchy and the running of large organisations in general, which is particularly evident in notes, reflections and social aphorisms of Landin, as well as some personal correspondence. In the series of activism and social-political notes, 1961-2003, some papers are testament to his personal life which he kept fairly private. From early 1970s he was involved in facilitating campaigns for the newly founded UK branch of the Gay Liberation Front [GLF] and other social justice causes. Some of the issues we see Landin concerned with in his private notes include:

Even those colleague and friends closest to him were not fully privy to the entirety of Landin’s personal campaigning life, although correspondence with fellow computer scientist Rod Burstall does shed light on discussions about balancing social activism with work [10]. Other correspondents include:

However little these two ‘lives’ crossed over, Landin’s archive attests to his constant evolution of teaching and communicating computer science throughout the 1960s to the early 2000s, alongside his interests and involvement in activism, facilitating social change and politics.