What do you get a library for its birthday? Especially if it’s a big birthday?

An unusual question, perhaps, but one which was faced by institutions in both Europe and North America when the University of Oxford announced that there would be a celebration of the Bodleian Library’s 300th Anniversary in 1902.

The answer, as evidenced by the Tercentennial Collection, was fancy things… 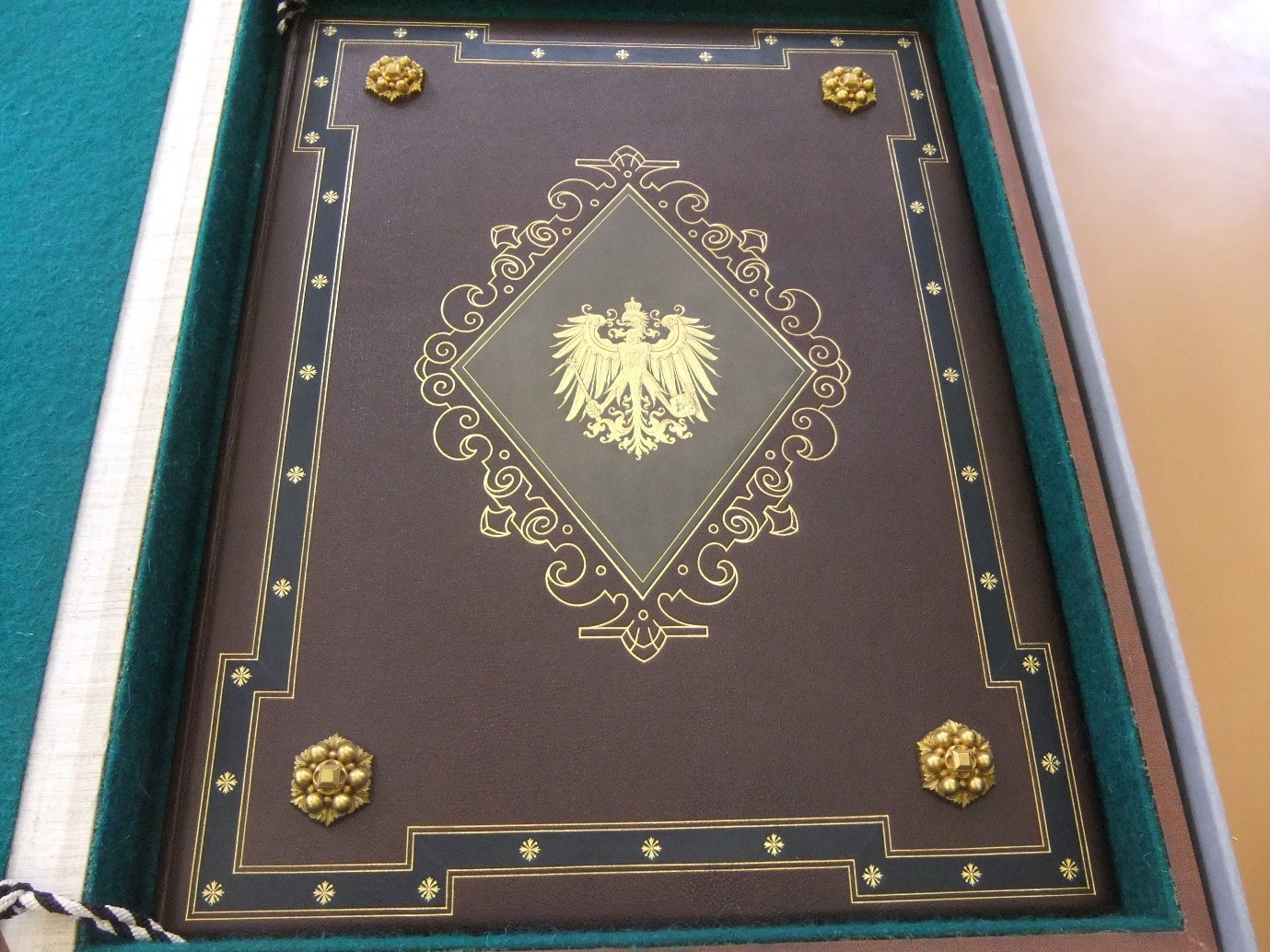 Tercent. b.5, which was sent by the governing body of the Akademie der Wissenschaften in Göttingen

As part of an ongoing project by the Rare Books team, my colleagues and I have been upgrading the records of collections which will be moved to offsite storage.

These are all items which have been in the library for some time, and most of them are on what we call Pre-1920 records, which were very minimal and transcribed from index cards. My remit is to deal with “recent” books which, in the context of collections that go back to the 15th century, means anything published after about 1850.

The Tercentennial collection had been sitting quietly in a corner of the bookstack ever since it was moved back in when the Weston Library first opened. Largely on records which described it as “[Miscellaneous papers relating to the tercentenary of the Bodleian library, 1902]” there was nothing on the catalogue to suggest the actual content, which was quite unusual.

There were boxes, in some cases very elaborate boxes, which contained salutations in a number of languages from institutions across Europe, often in very fancy bindings (pictured above Tercent. b.5, which was sent by the governing body of the Akademie der Wissenschaften in Göttingen) and also quite often printed on parchment, with wax seals and signatures from the various senior members of the institutions.

Some institutions, perhaps deciding that flat parchment was less interesting, sent scrolls, which make up the Tercentenary Rolls collection. 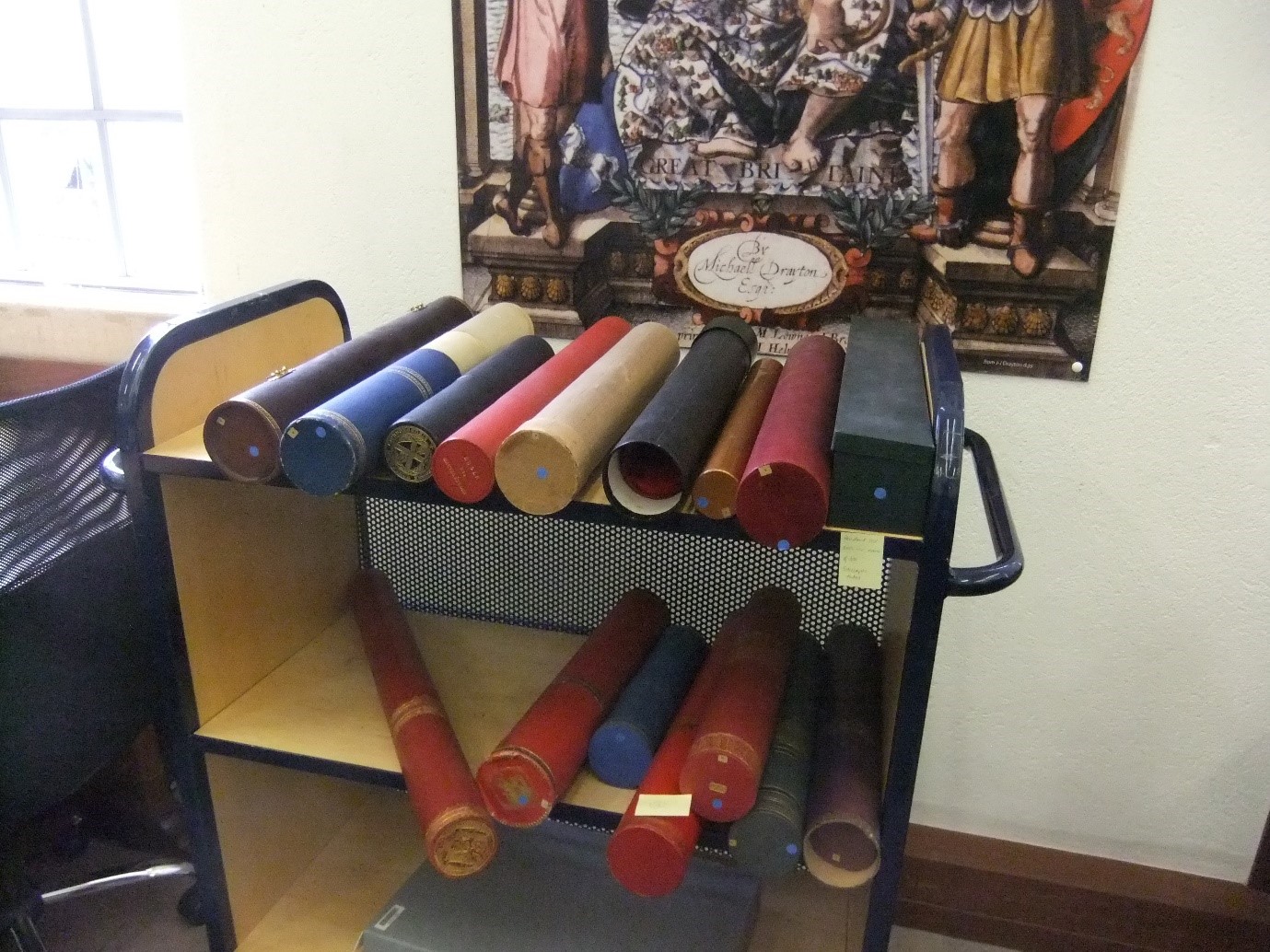 This one, Tercentenary Rolls 9, came from the Universität Göttingen, and is the only one which is presented as a box, rather than a telescopic tube: 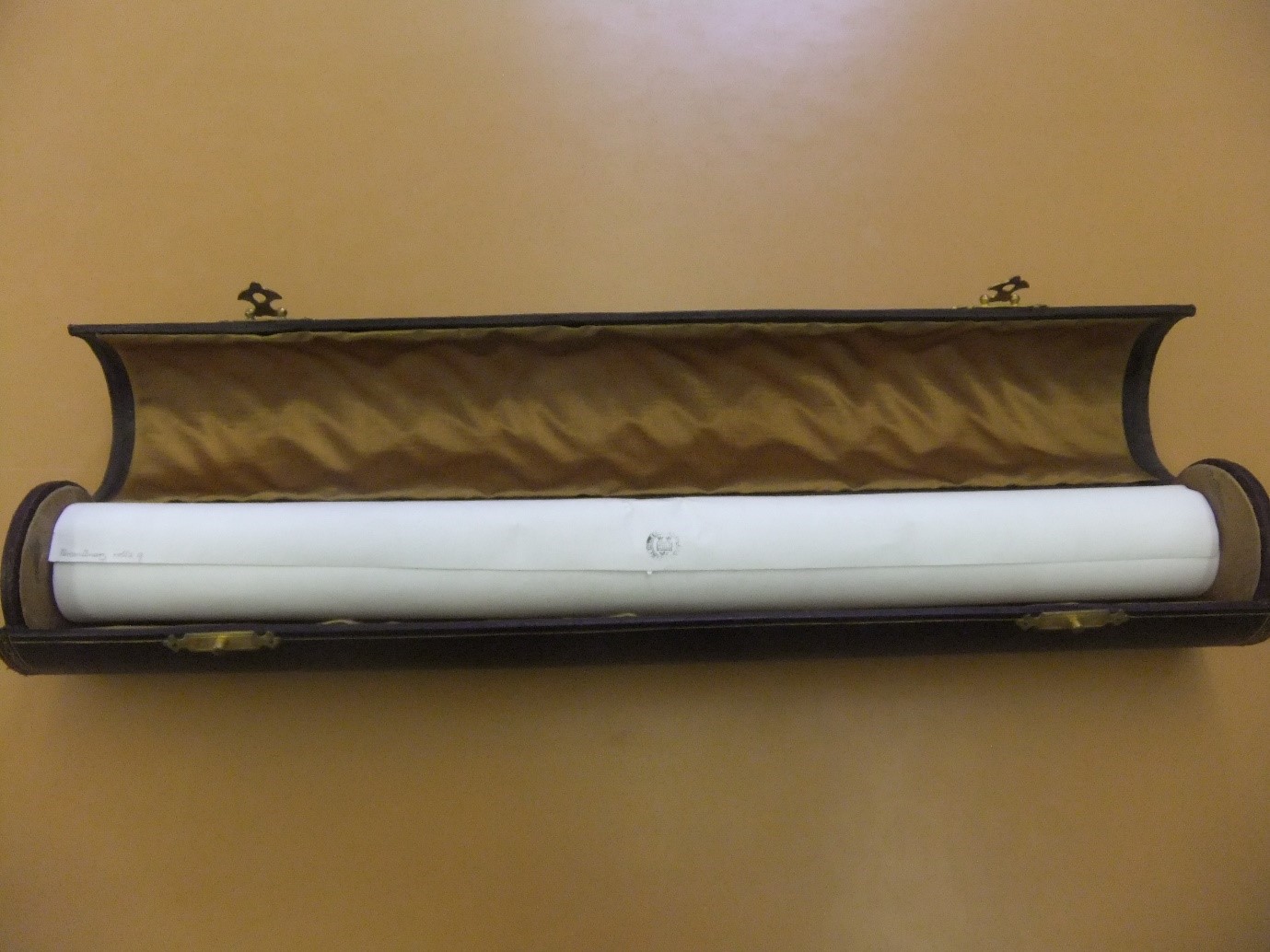 Aside from the interest of the lengths people went to to present their letters, including a lot of crushed velvet and gold, the textual content of these items is fairly similar: wordy congratulations on the anniversary of the library in a range of languages, and if this were all that the collection held it would be fairly boring. What makes this an interesting snapshot of the library’s history are the scrapbooks.

Tercent. b.9 is a collection of papers relating to the celebrations which was compiled by Falconer Madan, an assistant librarian at the time. It is a comprehensive record of the activities of the University, beginning with a letter dated 1 March 1901, proposing a committee to arrange events for the Tercentenary celebration. In chronological order, the scrapbook contains reports of the committee, announcements from the Curators confirming that the celebrations would take place, and then an official announcement of the celebration, in English and Latin.

Madan was extremely thorough in his collecting and this scrapbook contains a wealth of ephemera including proofs of invitations, lists of the guests who were coming and the people who would be hosting them, copies of a “Lady’s ticket” to the reception (most of the guests being men, of course), plans of the Ashmolean, where the reception was to take place, and seating plans and menus for the dinner in the Hall in Christ Church, which was held on October 9th, 1902.

The scrapbook concludes with press cuttings about the celebration from a wealth of British and foreign newspapers and journals.

Another scrapbook, Tercent. c.5, holds similar material; both now have extensive content notes in the catalogue records, listing everything.

A published work, Pietas Oxoniensis was also produced by the Oxford University Press, and there is evidence in the Tercentennial collection of the painstaking work which went into it. There are several versions of the book in the collection; Tercent. c.6-c.12 are different iterations including proofs which were sent by the Press to the Librarian, Edward Nicholson, who annotated them in his distinctive spidery handwriting in bright red ink.

This example, Tercent. c.6, also shows a few annotations by Madan in black ink. A copy of the finished book can be found at Tercent. c.13. 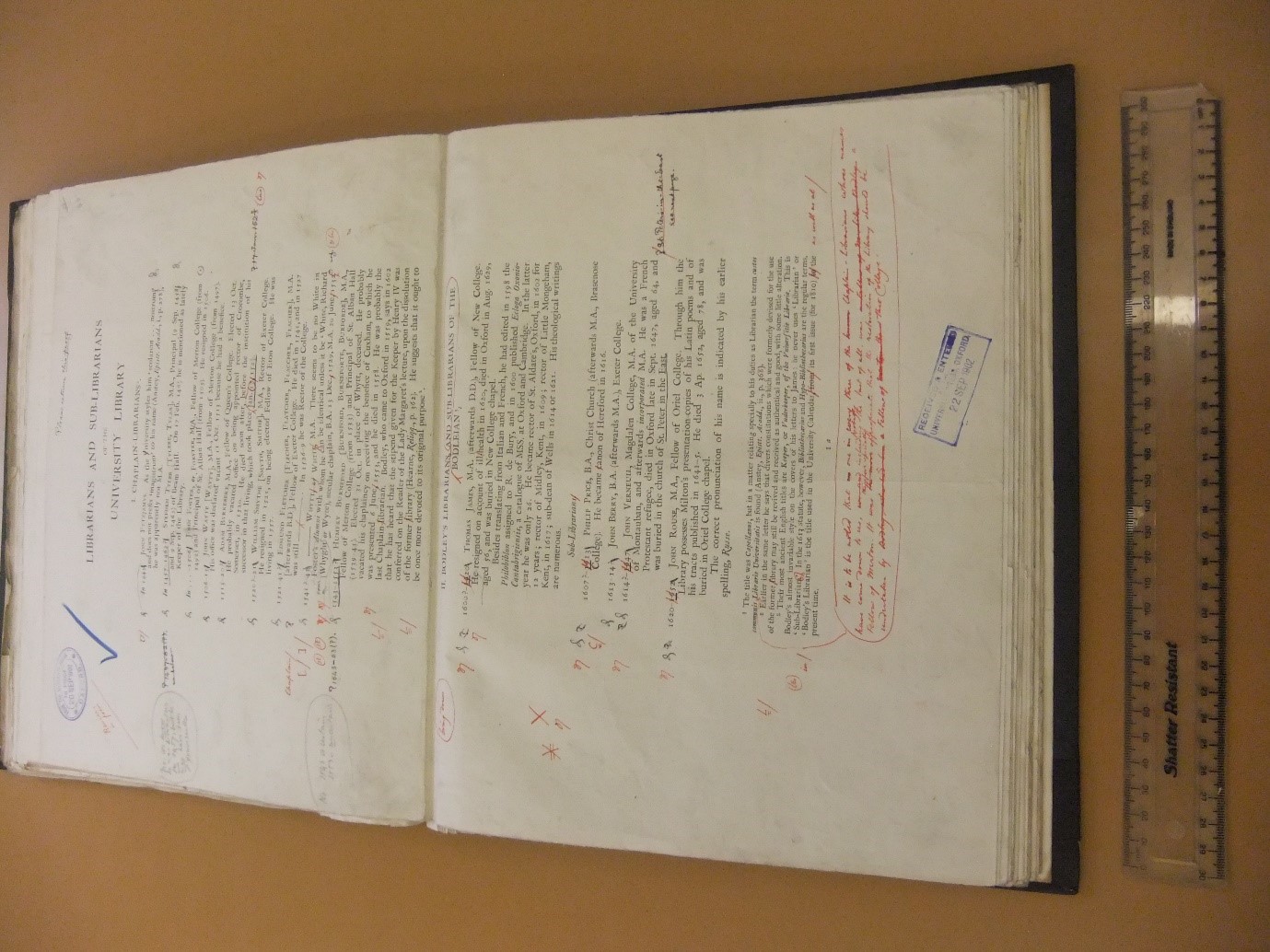 This collection of disparate not-books represents a snapshot of a particular event in the history of the library and is all the more valuable for that. If it had not been for the diligence of the librarians at the time, these items might have been separated into different collections, or lost entirely.

Someone – presumably Falconer Madan – had the foresight to collect all the materials and gifts together, and it is our good fortune that they have been largely undisturbed for the last 120 years.

Everything has now been boxed and sent offsite (with the exception of Tercent. Rolls 11, which is printed on very friable paper and is awaiting repair), from where they can be ordered to the Weston Library by anyone who is interested.

This year marks 420 years since the opening of the library, and, while there will be no big celebrations (or fancy scrolls) to mark that birthday, it seems fitting that the celebrations of 1902 are now recorded in a way that makes them more accessible.