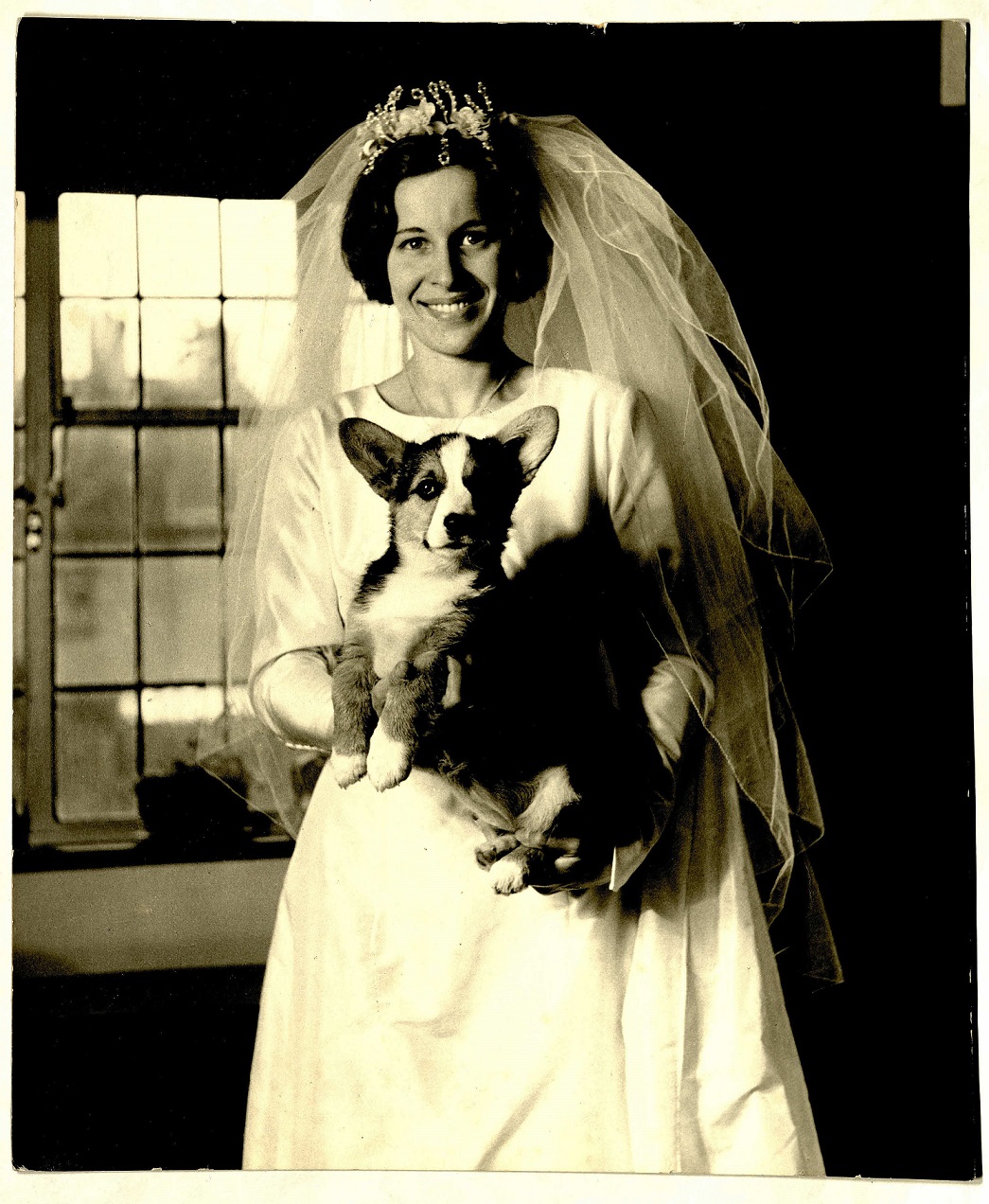 Helen Muspratt (1907-2001) was a skilled experimental and documentary photographer of the 1930s who produced haunting photographs of pre-war Russia and Ukraine as well as the Welsh valleys in the depths of the Great Depression. For most of her life, however, she was a hardworking studio photographer. From her studio on Cornmarket Street in Oxford she staged lively portraits of everyone who crossed the threshold, from playful toddlers to students celebrating degree days. And she was also a skilled wedding photographer, a job which consumed many Saturdays. Our collection of her wedding photographs spans the 1940s to the 1970s and showcases ordinary people, usually unnamed, in a beautiful array of wedding fashions.

Hello! I have just started a new job at the Bodleian.

I have been here for 65 days and it’s been quite strange. There are documents and books and unusual things scattered across 28 libraries, and 3 museums jammed with treasures, and botanical gardens with the biggest leaves I’ve ever seen. I haven’t yet visited everywhere, or begun to understand the vast collections that I’m now responsible for.

As Curator of Photography, I am fascinated by all the photographs that have seeped into the library over the years, through legal deposit, and literary papers, and political archives, and sprawling collections of ephemera. It’s well known that the Bodleian holds the archive of WHF Talbot and many precious photographs from the dawn of photography, but did you know that we also have the Talbot family seed bank? – hundreds of little folded envelopes with scribbled handwriting describing the plants that were grown in the Lacock Abbey Gardens. I discovered that we have six copies of the 17th century translation of Ibn al-Haytham’s treatise on optics, the book that brought the modern science of light to Europe. And we have two beautiful portraits by Julia Margaret Cameron that were once owned by Anna Atkins, the great pioneer of early botanical photography. We have Helen Muspratt’s own cameras, and a Daguerreotype of Maria Edgeworth taken at one of the first portrait studios, and who knows what else?

I will write more blogs and introduce everyone to all the wonderful things in our photography collections, but today I would like to tell you about the time that Henri Cartier-Bresson came to Oxford.

Henri Cartier-Bresson was one of the greatest photographers of the 20th century. He thought of photography as the art of capturing a single fleeting moment that articulated something profound about the people and places he saw. And so he would wander the streets, looking for a fragment of life crystallised in a split second. If he was quick, he’d catch it and create an impossibly perfect image. And so he captured children and horses; a cyclist on the move with a newspaper in front of his face; a figure in flight, leaping across a puddle; a fire breather spitting flames into the air; a smiling infant balanced on her father’s outstretched palm. Photography made into the search for a decisive moment.

The Bodleian has a fine collection of his photobooks – Images à la sauvette, Les Danses à Bali, People of Moscow, Les Européens, China in Transition, Man and Machine, and more – but we had no original photographs.

At least, we didn’t until Heather Rossotti contacted me a month or so ago with a signed photograph that Cartier-Bresson had given to her mother in 1975. 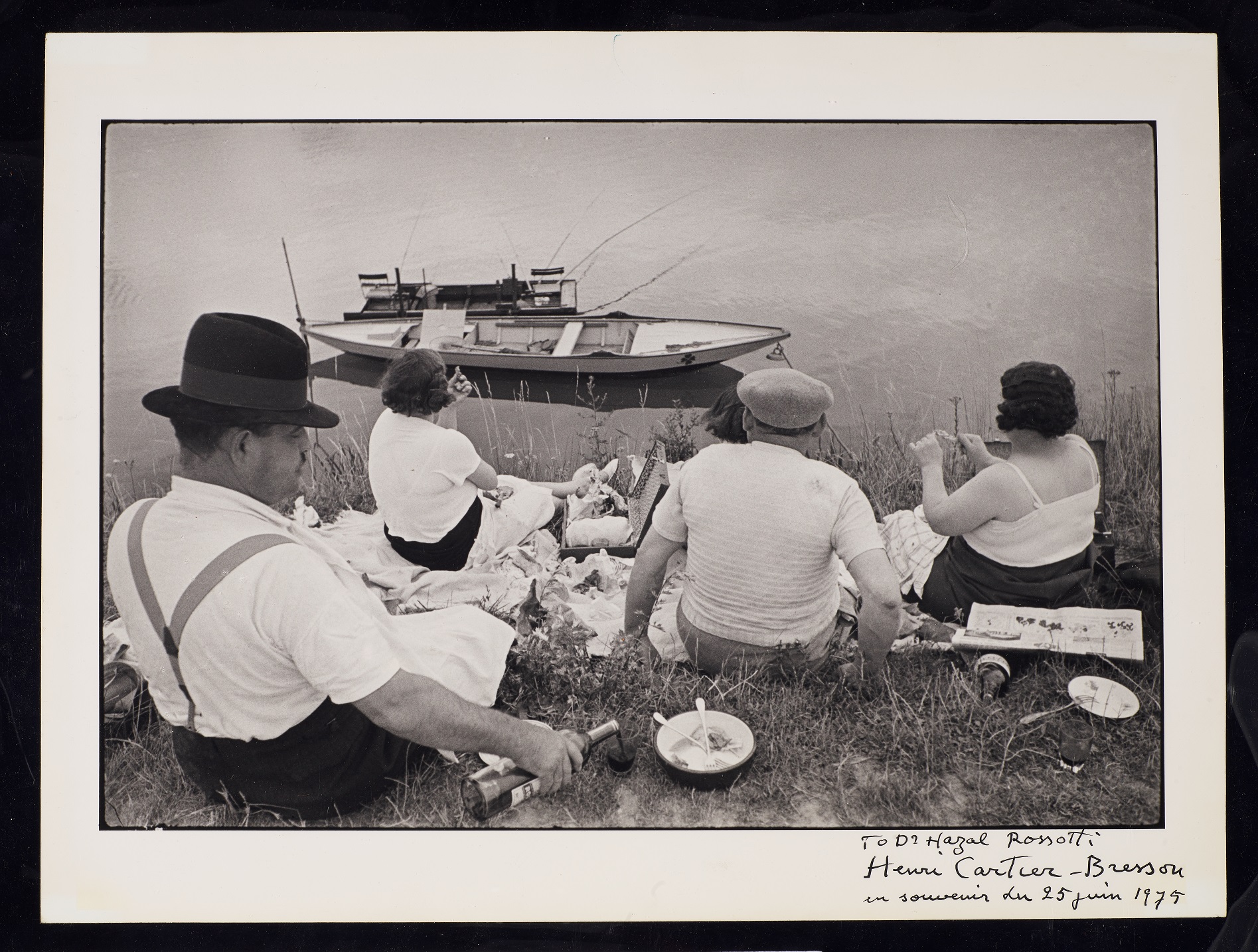 Sunday on the Banks of the River Marne is a beautiful photograph of a group of people having a nice picnic by the river. Looking down the bank towards a boat; picnic hamper open; man pouring wine into a glass tumbler. The scene is lovely and the Rossotti family kindly wanted to donate it to us, along with a small parcel of documents.

The donor’s mother was Dr Hazel Rossotti, a chemist and Fellow of St. Anne’s college. In 1974, she had nominated Cartier-Bresson for an honorary doctorate. He was delighted, writing back right away to accept the honour.

I want to thank you for your very kind invitation from the Hebdomadal Council of the university to accept an honorary degree of doctor of letters. – I want to let you know how honoured I am. –

May I accept it on behalf of a particular conception of photography which perhaps may be summarised as an expression of the world in visual terms and also a perpetual quest and interrogation? It is at one and the same time the recognition in a fraction of a second of a fact and the rigorous arrangement of the forms visually perceived which give to that fact expression and significance. – A conception of photography which is shared by many. 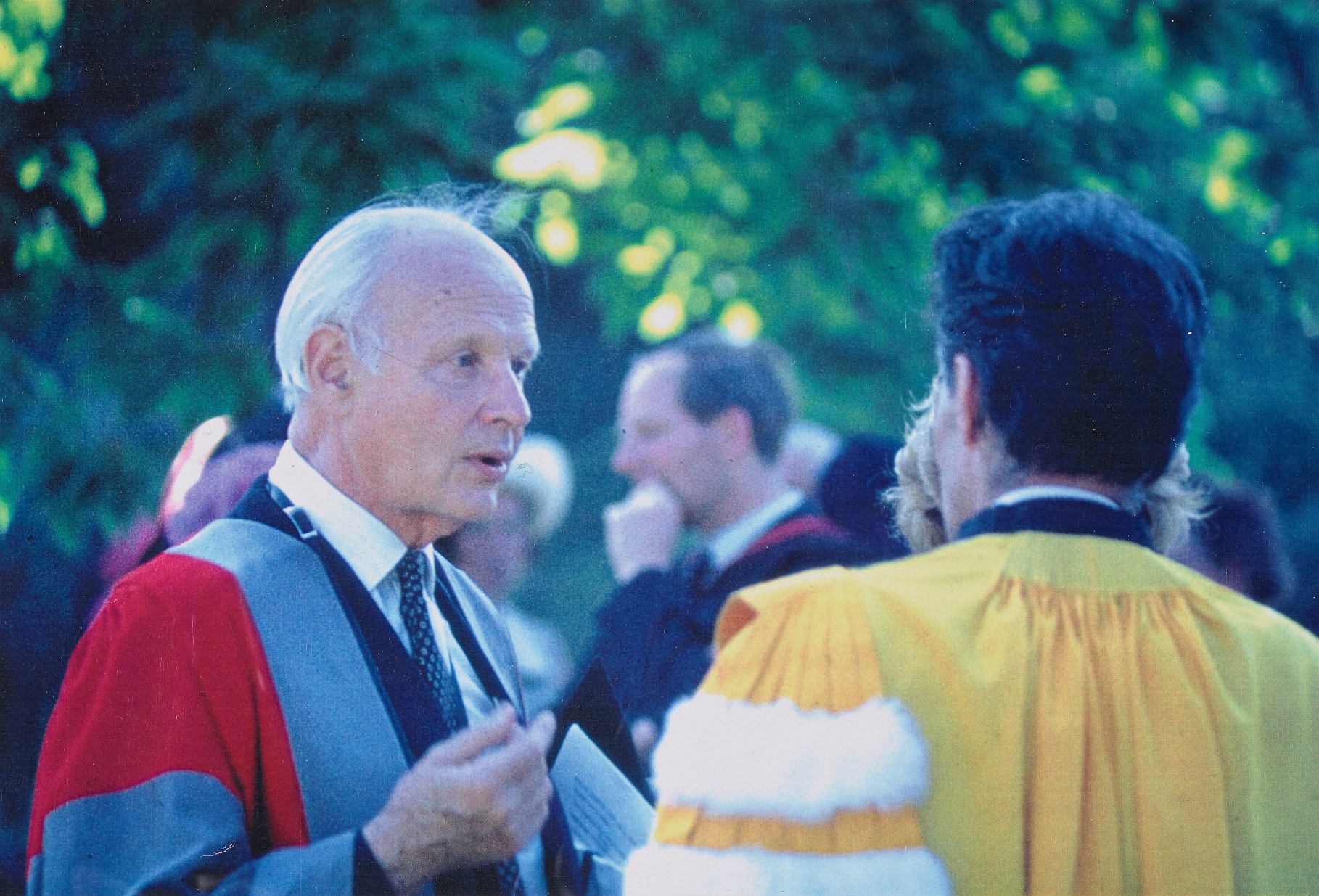 In the summer of 1975, Cartier-Bresson came to Oxford and attended the ceremony in a bright red robe and mortar board. A bewildering Latin eulogy was read to him. He did not understand a word of it, but John G. Griffith, the university orator, still took great pains to craft a speech worthy of the photographer; corresponding back and forth with Dr Rossotti to craft phrases and sharpen ideas.

He has indeed gone one better than Homer’s Odysseus, who ‘saw cities of many men and sensed their casts of mind’, in that he has left behind brilliant evidence of his glimpses of even the most chance-sent moments, now recorded for the unending delight both of his contemporaries and of posterity, whether the fancy gazing at Danses à Bali or From One China to Another or whatever else he has captured in the briefest of split seconds and rendered eternal by his art.

By way of thanks, Cartier-Bresson gave Dr Rossotti a signed photograph of a Sunday picnic at the edge of a river. The letters, and ceremonial booklets, and a transcript of the orator’s address were all kept by Dr Rossoti. They help us to tell the story of Cartier-Bresson’s visit to Oxford and to explain how this photograph came to exist.

It’s not very much in the scheme of the Bodleian’s treasures, but it’s a fitting tribute to him – a photograph and a small archive that illuminates a fragment of time; a little moment in Henri Cartier-Bresson’s own life.