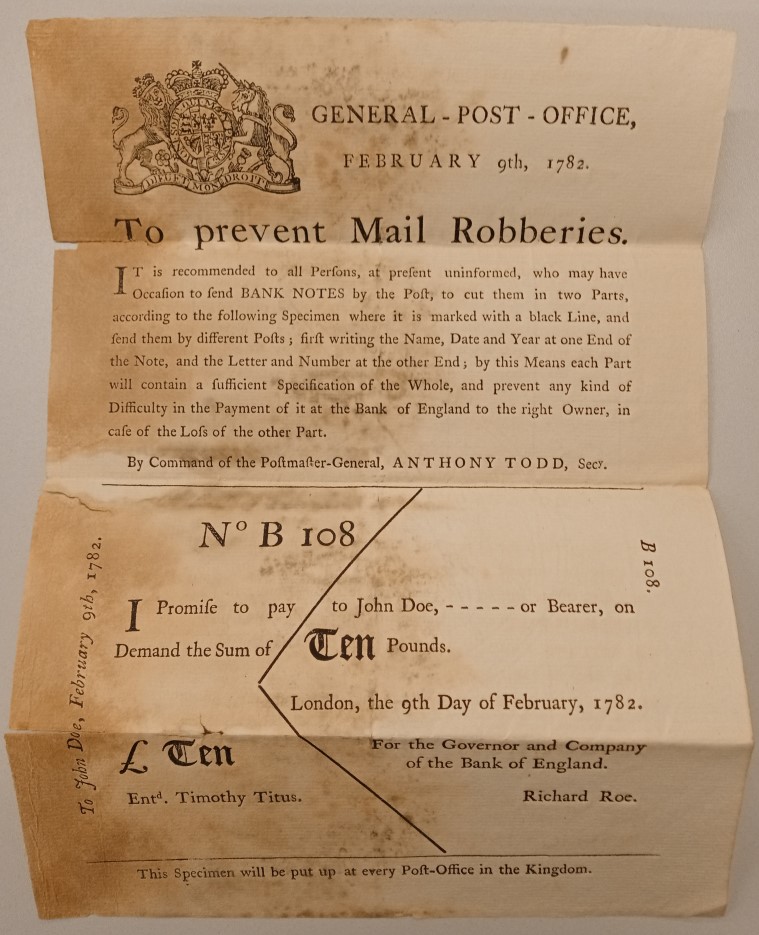 November seems to be the month for major episodes in the religious troubles of the early modern British Isles. The Accession of Elizabeth I in 1558, the attempt to blow up the King and his Parliament in 1605, the landing of William of Orange at Torbay in 1688 and Bonnie Prince Charlie’s invasion of England in 1745, all happened in November.

Records of these events are to be found among the collections held in the Western Manuscripts section of the Bodleian Libraries, particularly among the great State Paper collections to be found in the Clarendon, Rawlinson and Carte collections. However, ripples spread out much further than this. If you were wondering what impact Bonnie Prince Charlie’s march to Derby had in 1745, you might not turn first to the papers of an antiquary such as William Stukeley. His papers after all are mainly a record of his study of the ancient and medieval remains of Britain, and he would not seem to be the person to turn to for contemporary comment. I have developed a habit of looking at key historical dates in any manuscript just in case there is an interesting comment to be found. So, finding myself one day with Stukeley’s diary for  1743-1746 (MS. Eng. misc. e. 196) in my hand I thought I would see if he had anything to say about Jacobites, even though the Summary Catalogue entry is brief: ‘Notebook containing Stukeley’s diary, 21 May 1743-10 Sept. 1746.’ 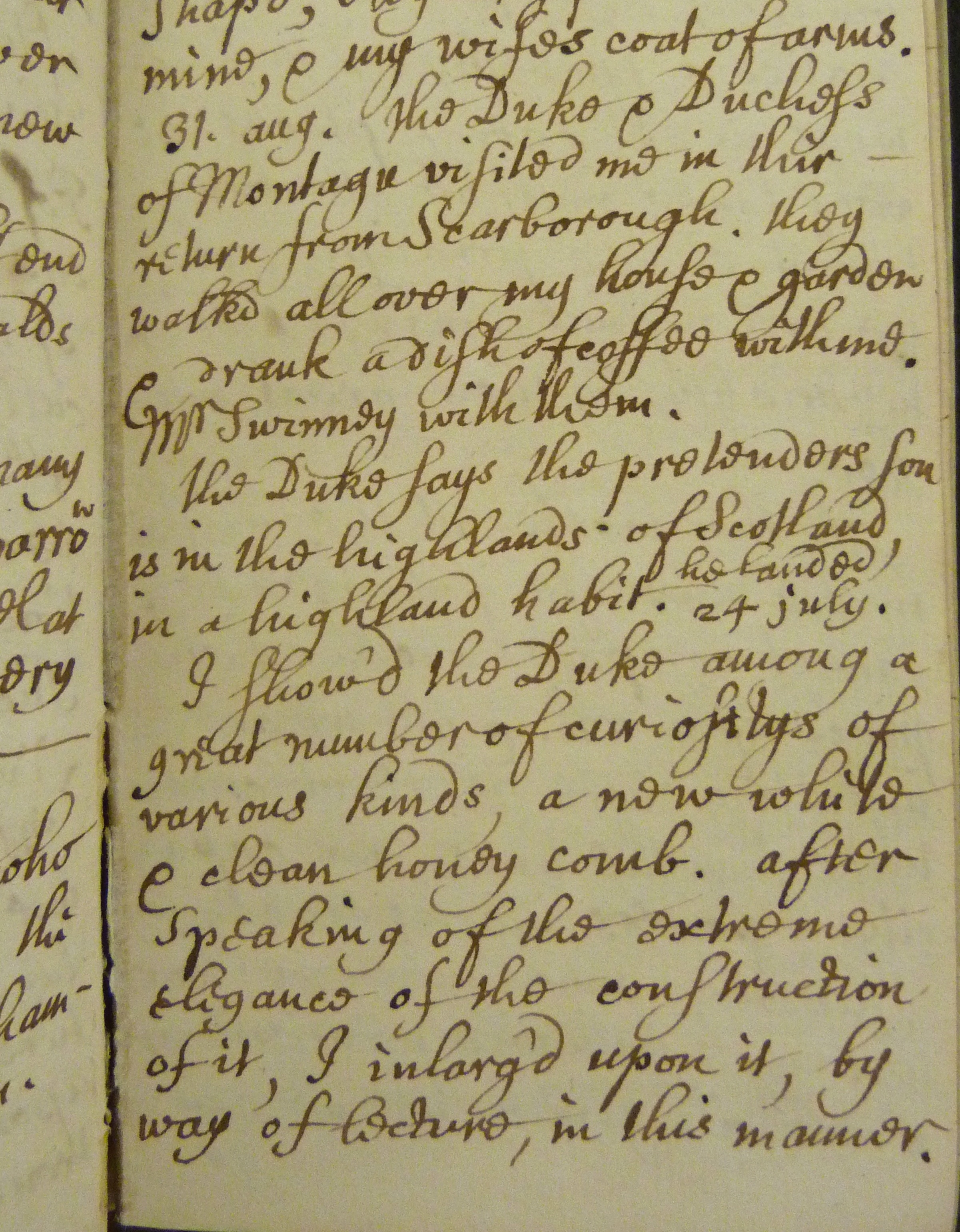 Looking at the entry for 30 August 1745 I found that Stukeley was visited on that day by his patrons the Duke and Duchess of Montagu, returning from Scarborough. He noted that the ‘Duke says the pretenders son is in the highlands of Scotland, in a highland habit’, before recounting his discussion with the Duke on the elegance of the structure of the honeycomb.

On 30 September Stukeley set out for Lincoln to meet the Duke of Ancaster, and on the next day, in Lincoln Castle ‘a very great assembly of Lords, Baronets, clergy & gentlemen’ met and subscribed to an address to the King and to an association, before making a ‘voluntary subscription of several thousand pounds, for raising troops, to oppose the pretenders son’. He also observed that they had ‘now pulled down the huge stones of the peers of the Roman gate on the south side of the old city’, the arch having been ‘destroy’d by Houghton the jaylor a good many years ago.’

On 9 October Stukeley was at home in Stamford and involved in ‘mending the road in Scogate [Scotgate] toward brig Casterton in a magnificent manner.’ On the 12th he noted ‘the Swiss, dutch & English troops daily passing by to the north’ and had heard news of  ‘68 waggons laden with ammunition’ which had passed Nottingham. On the 13th ‘a coach & 6 with 8 dragoons laden with money passed my door.’ On the 23rd Stukeley ‘went about the parish to take subscriptions for raising a troop for the kings service agt the rebels.’

All this conveys something of the sense of increasing alarm, but the reality of the situation really seems to have struck Stukeley on 1 December, a few days after the Jacobites had crossed the border into England:

‘Lady Malton fled from her seat by Sheffield, came to Stamford, & alarm’d us, with the rebels being near Newark. Spalding, Wisbech, Peterborough, Oundle & all the country round in the utmost fright: hiding & carrying off their goods.

This alarm was renew’d on 5th the rebels being at Derby & setting  a guard on Swarston bridg, for Leicester. Many familys mov’d off their goods, & remov’d towards the fen country, & an universal dejection.

Mr Gale & his family came hither from Scruton, to avoid the Rebels.’

This would have been Samuel Gale (1682–1754) the antiquary, and Stukeley’s friend, whose family seat was Scruton Hall in Yorkshire.

‘Colonel Jo. Creed of Oundle marchd his Squadron of horse (the D. of Montagu’s) to Stamford. He lay at my house. He had been orderd to march to Derby but the rebels were in possession of the Town just as he came there.’

The alarm passed, however, and on 11 December ‘Mr Griffis’ visited Stukeley to discuss holding ‘a course of experimental philosophy at Stamford’, and on the 23rd Stukeley was able to record that he ‘projected a revival of the Brazen nose Society of Stamford.’

On 4 January 1746 Stukeley sealed the lease of his Grantham house to Mr Fish, and then noted the arrival of the commander of Government forces, the soon-to-be notorious Duke of Cumberland, the ‘Butcher’:

‘½ an hour after 11 in the morning, pleasant and sun-shining frost: the Duke of Cumberland came hither [back from Carlisle] … He rode in Mr Midlemores coach from Grantham, thro’ the badness of the Scogate road … & took coach at the Bull. Mr Gale lent him his coach & 4. They put 2 more horses to it. His R. Highness was drest in blew. He has not been in bed, since he set out from Carlisle. Our town complimented his R.H. with a vast throng & loud huzza’s & bells ringing etc.

I got a very fine & large fossil cornu ammonis from the stone quarrys by Queens cross.’

The first doleful effects of the rebellion also touched Stamford when on 1 February 1746 ‘the rebel prisoners of the garrison of Carlisle passd thro’ Stamford in 4 open wagons, guarded by 400 soldiers, & the same day the Dukes mules with his baggage came hither, going to Scotland.’ The Battle of Culloden was fought on 16 April 1746; some of the Jacobite officers captured after the fall of Carlisle in December 1745 were sent to London to be hung, drawn and quartered for High Treason.

I should, of course, have expected to find such echoes of the ’45 in Stukeley’s diary. Stamford lay on the Great North Road from London to Edinburgh (now the A1).