Of the many Oxford University traditions that have survived to the present day, one of the most visually distinctive and recognisable is the ‘academic costume’: the gowns, caps and subfusc worn today by students and officials during examinations and ceremonies. Yet despite the long presence of academic dress in the University’s history, the University Archives hold surprisingly little material relating to it. This is perhaps because until the mid 20th century, its exact nature appears to have been fairly fluid, constantly evolving, and on occasion subject to change that was not authorised by the University. It was not until 1957 that academic dress was fixed in its current form, with the publication of Academic Dress of the University of Oxford by R.E. Clifford and D.E. Venables. This illustrated guide includes precise descriptions of each element of the academic dress, and although this book has been republished and revised, very few alterations have been made to the rules it lays out.

The oldest item relating to this topic in the University Archives is this small book, which dates from 1716 and contains numbered engravings of different forms of academic dress. An example of every official and student is shown, from the Vice Chancellor and the Bedels to the Bachelor of Arts, the Master of Arts and many others. 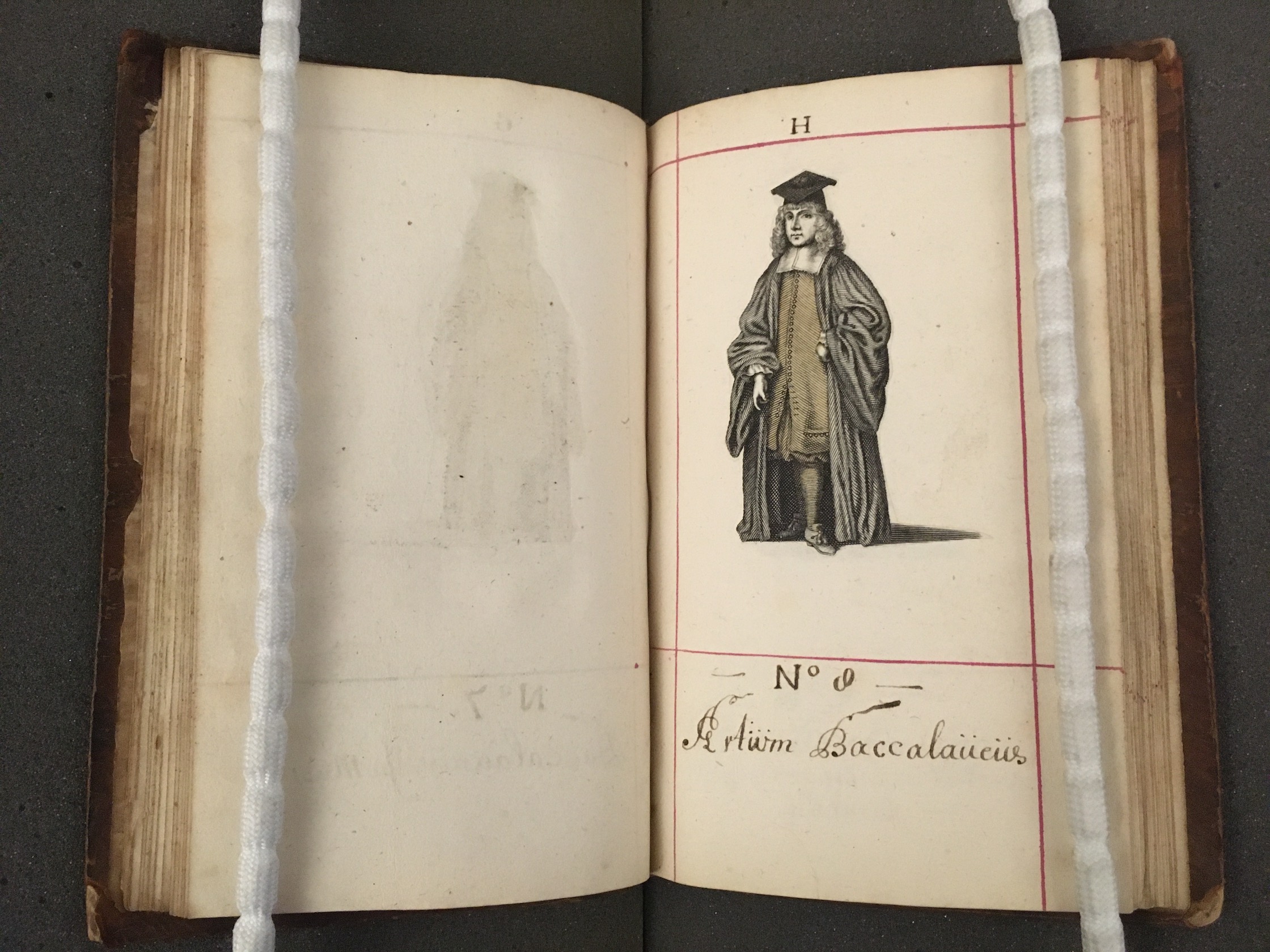 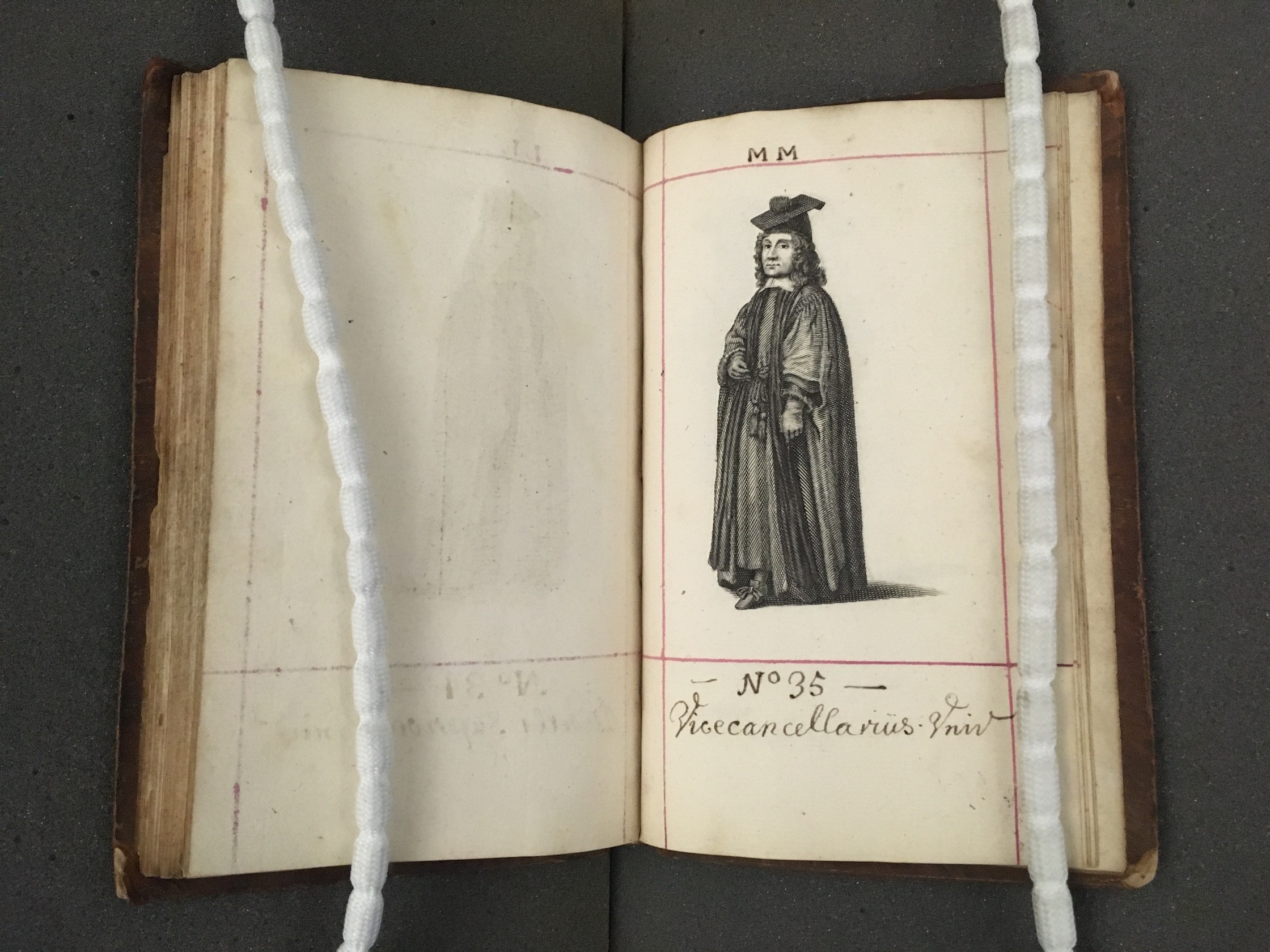 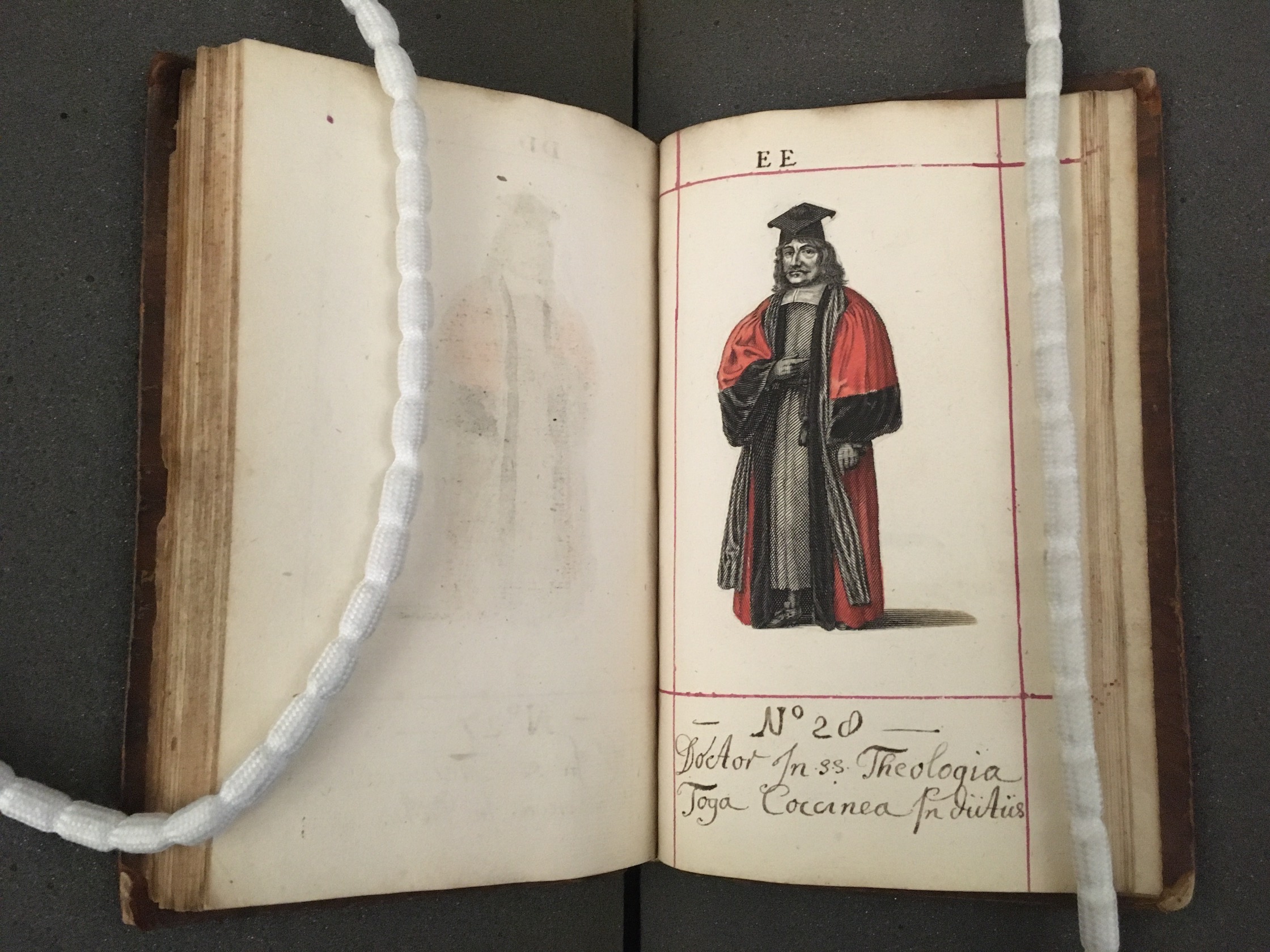 These images are in fact cuts from David Loggan’s 1675 engraving Habitus Academici, part of his Oxonia Illustrata series of engravings illustrating Oxford University and its environment. The original engraving is a black and white single sheet, but here they are coloured, bound in a small volume with a new title page: ‘Habitus Academici in Universitate Oxoniensi Anno 1716’, and they are likely to be the earliest coloured representations of Oxford University academic dress. The shelfmark written at the bottom of the title page, ‘Phillipps MS 24809’, shows that it appears to have made its way into the collection of Sir Thomas Phillipps, one of the most important book collectors of the 19th century. It was ultimately donated to the University Archives by the Keeper of the Archives 1927-45, Strickland Gibson.

Not only are these illustrations some of the earliest of academic dress in the University Archives, but they are some of the only visual representations we hold. Most other records on this topic concern attempts to regulate academic dress, and how these rules were broken.

Although the exact nature of academic dress pre-20th century is hard to pin down, attempts were nevertheless made to regulate it as early as the 17th century. In the Laudian Code of 1636, which was the first coherent set of Oxford University regulations, Statute Tit. XIV De vestitu et habitu scholastico laid down rules for how academic dress should look and be worn, and required models of the various outfits be made. The original 1636 ‘Codex Authenticus’ of the the Laudian Code is held in the University Archives, as seen below with the seals of the University, Archbishop Laud and Charles I. 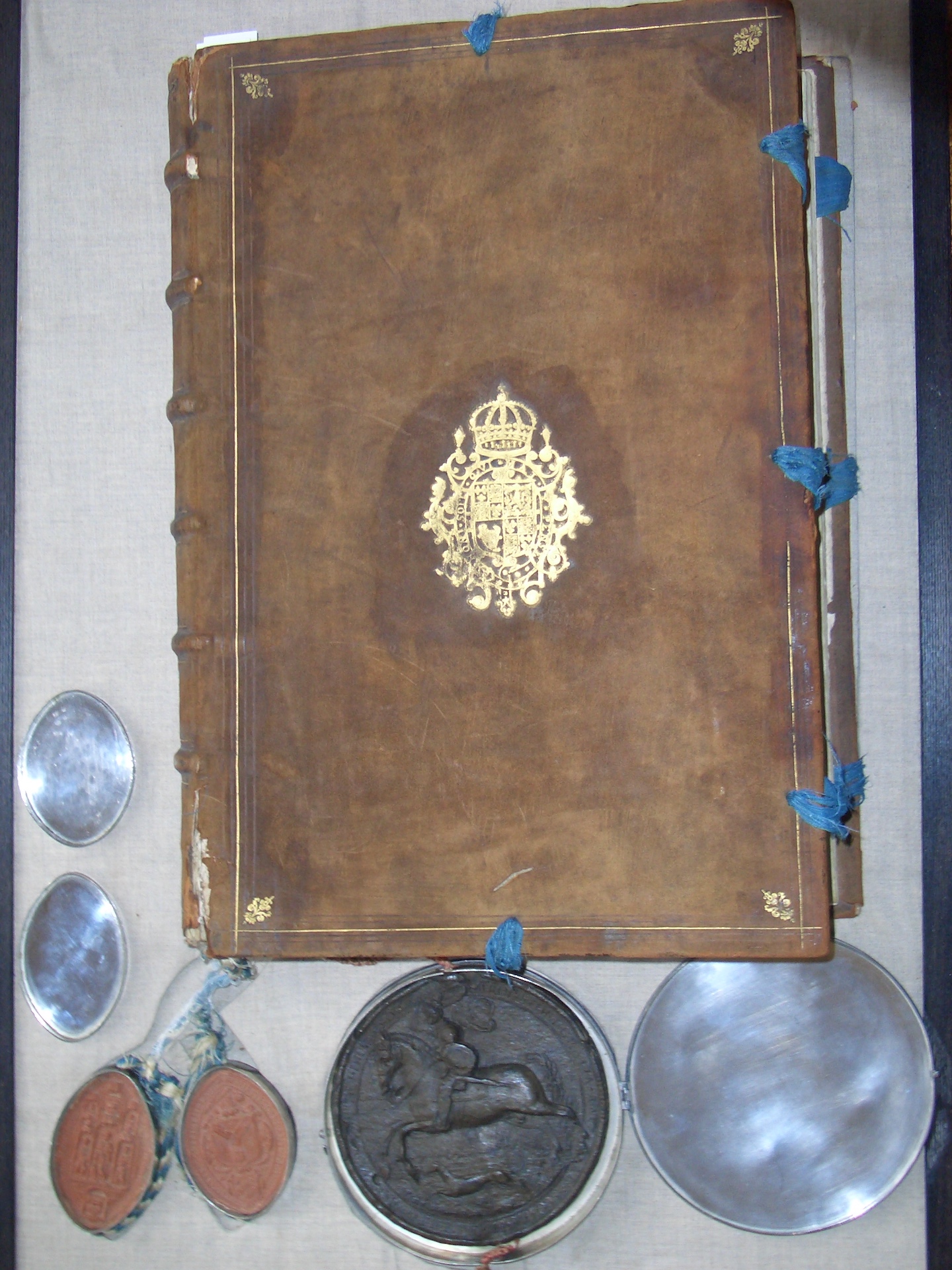 The ‘Codex Authenticus’ of the Laudian Code. Reference: OUA WPγ/25c/1

At this point in time, academic dress was not worn for just ceremonies and examinations, but in University members’ everyday lives, including when they were out and about in the city. As a result, rules on academic dress were also rules about the everyday physical appearance of university members. §1 of Stat. Tit. XIV in particular describes how no member’s hair should be ‘[in] curls or excessively long’, and lays out the monetary penalties and corporal punishment that could be expected for disobeying this rule.

As the centuries passed, University members were required to wear their gowns less and less, and so the surveillance of their everyday appearance began to relax. Nevertheless, there were still plenty of instances of students bending or breaking the rules, and during the 20th century the University Archives begin to show more evidence of how exactly rules were disobeyed. This Proctor’s memorandum from 1945, shown below, gently reminds students of the correct situations in which academic dress should be worn, in particular noting that ‘it is an offence to smoke in academic dress’. 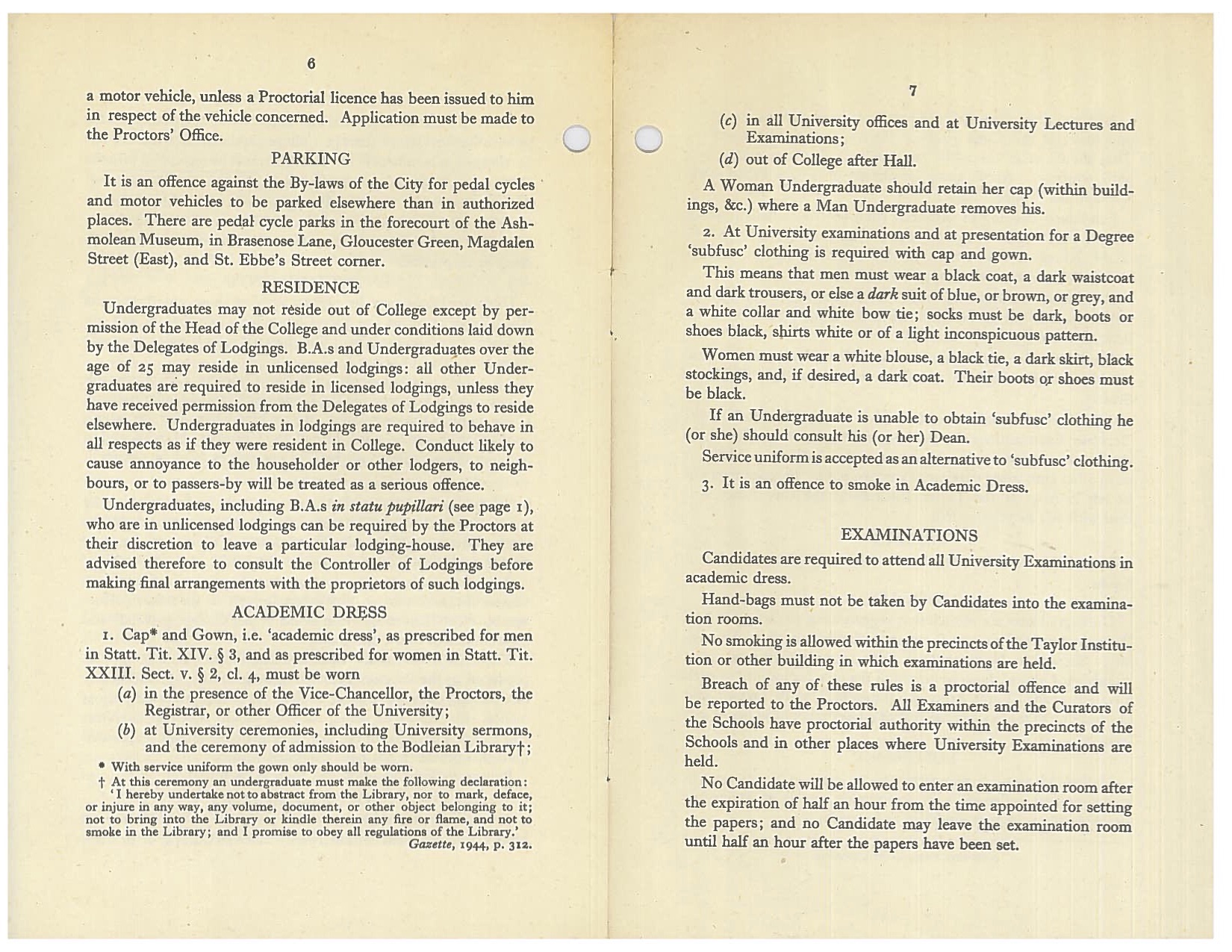 Similarly, this notice from around the 1920s-30s, sent from the Vice-Chancellor and the Proctors to the college authorities, emphasises the importance of candidates for degrees being suitably dressed. According to this note, those taking degrees recently had been doing so ‘in torn gowns, in brown shoes, in light grey suits, in flannel trousers, and even in a form of jumper or ‘pull-over’. 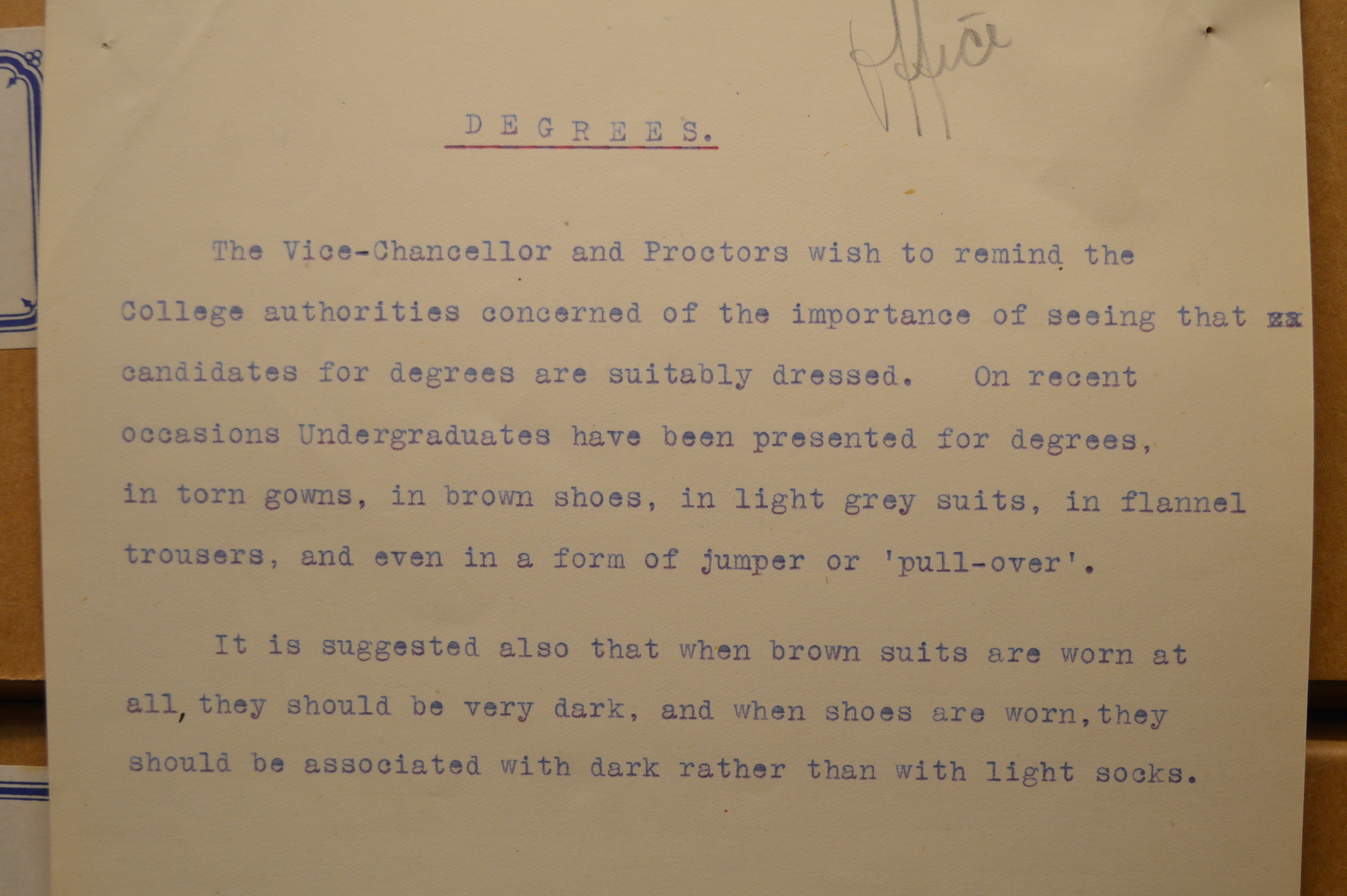 The University Archives’ most recent holding relating to academic dress dates from 1956, just before the publication of Academic Dress of the University of Oxford in 1957. The ‘Register of Colours’ created by Shepherd and Woodward, an outfitter to the University based in Oxford, contains samples of the correctly dyed fabric to be used on each item of dress, with descriptions of the precise material and hood shape to be used. 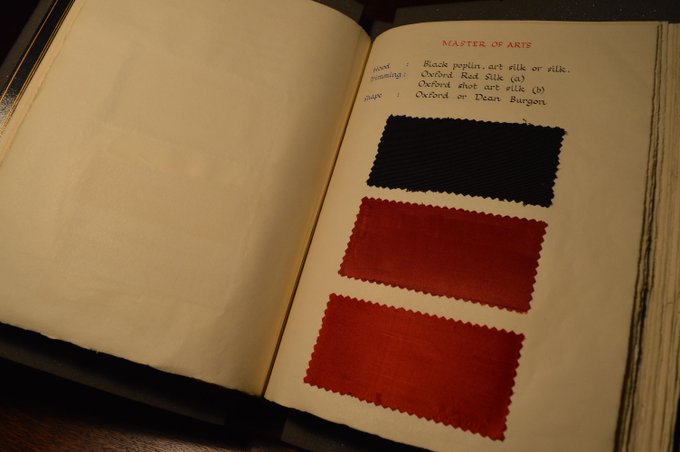 The register is still occasionally updated by Shepherd and Woodward today, as it is relied upon by the Vice Chancellor’s Regulation 1 of 2002, which states that robes, gowns and hoods should conform to the standards ‘prescribed in the Register of Colours and Materials of Gowns and Hoods for Degrees of the University of Oxford… deposited in the University Archives.’

To find out more about Oxford University Archives and our holdings, please contact us.