Ninety years ago this month Albert Einstein, the great physicist and mathematician, visited Oxford University. He came to give the Rhodes Memorial Lectures, a short series of lectures on the subject of relativity held on three successive Saturday lunchtimes at Rhodes House. According to notices in the University Gazette, the lectures were for members of the University, but a few tickets were available to members of the public. The first lecture on Saturday 9 May entitled ‘The Theory of Relativity’ was reportedly packed out. When the lecture began, there were so many people present (over 400 according to The Oxford Times), that there was standing room only for some.

While he was here, the University grabbed the opportunity to give Einstein an honorary degree. Already a famous scientist by this date, he had been invited by the University to receive an honorary degree twice before: at the Encaenia in 1925 and again in 1930. He had been unable to attend both times; his doctor advising him against the trip on the second occasion. His letters declining the offers are gracious and elegantly written. But this third time, the University succeeded and Einstein wrote again on 12 May 1931 accepting the offer with thanks. The arrangements were hastily made and his Doctor of Science (DSc) degree was conferred on the morning of Saturday 23 May, shortly before he gave his third, and final, lecture.

University Gazette notice of the conferral of Einstein’s honorary degree, 1931

Einstein delivered that final lecture, on the ‘Latest developments of the Theory’ later than day but to a slightly smaller crowd than previously. The Times reported that there were notable absentees in the audience. Maybe even Oxford’s brightest minds had found an exposition of relativity in German rather challenging.

Einstein left Oxford for Hamburg five days later but the blackboard which he used in giving the second lecture, on ‘The Cosmological Problem’, was kept by the University and remains today in the Museum of the History of Science. 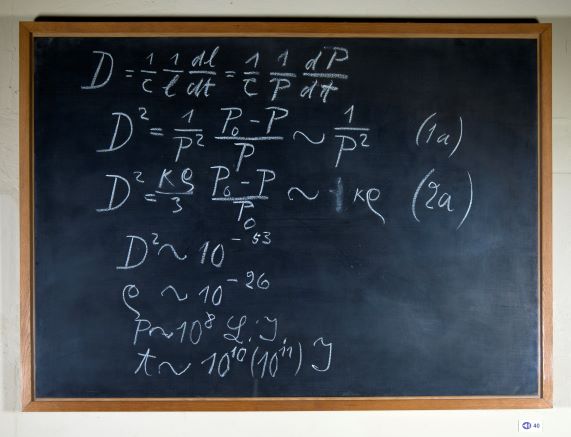 Blackboard used by Einstein during his second lecture on ‘The Cosmological Problem’. © The Hebrew University of Jerusalem. With kind permission of the Albert Einstein Archives.