We are pleased to announce the launch of our revised and expanded catalogue of Conservative Central Office Organisation Department material, with an array of new material now available to readers for the first time. The catalogue contains papers of the Conservative Party’s Organisation Department and its successors from 1911-2000, including papers of the Director of Organisation, campaigning and elections materials spanning from the 1940s to late 1980s, reviews of the Party organisation, training files for agents, and files from the component sections of the Department. Amongst the newly added material is correspondence of politicians as far back as the 1930s, including Sir Winston Churchill, Sir Alec Douglas-Home, and Rab Butler, as well as publicity and campaigning materials, and monitoring of other political parties. Since this catalogue is so expansive, covering material from all aspects of the work of the Organisation Department and spanning almost a century, this blog will highlight just a handful of interesting areas, demonstrating the catalogue’s significant value for historians of British politics and anyone with an interest in the Conservative Party.

A first highlight of the revised catalogue is the substantial amount of publicity and campaigning material, created by the Party during General Elections, By-Elections, and European Elections through the mid to late twentieth century. These files, within the ‘Campaigning and Elections’ series of the catalogue, give a great insight into both the behind the scenes creation of these campaigning materials, including early drafts and correspondence, and the final printed and published leaflets, posters, and pamphlets. Included within these files are artwork designs and leaflets created by Ronald Bell, who worked throughout the 1980s to organise and create national artwork used both between and during election campaigns. This image gives an example of such material, comprising correspondence sent to Bell in the late 1980s outlining the need for publicity promoting the benefits of the Community Charge to Asian families, and a translated leaflet created by Bell to achieve this. This file includes many examples of his artwork, as well as numerous drafts and early ideas for leaflets. 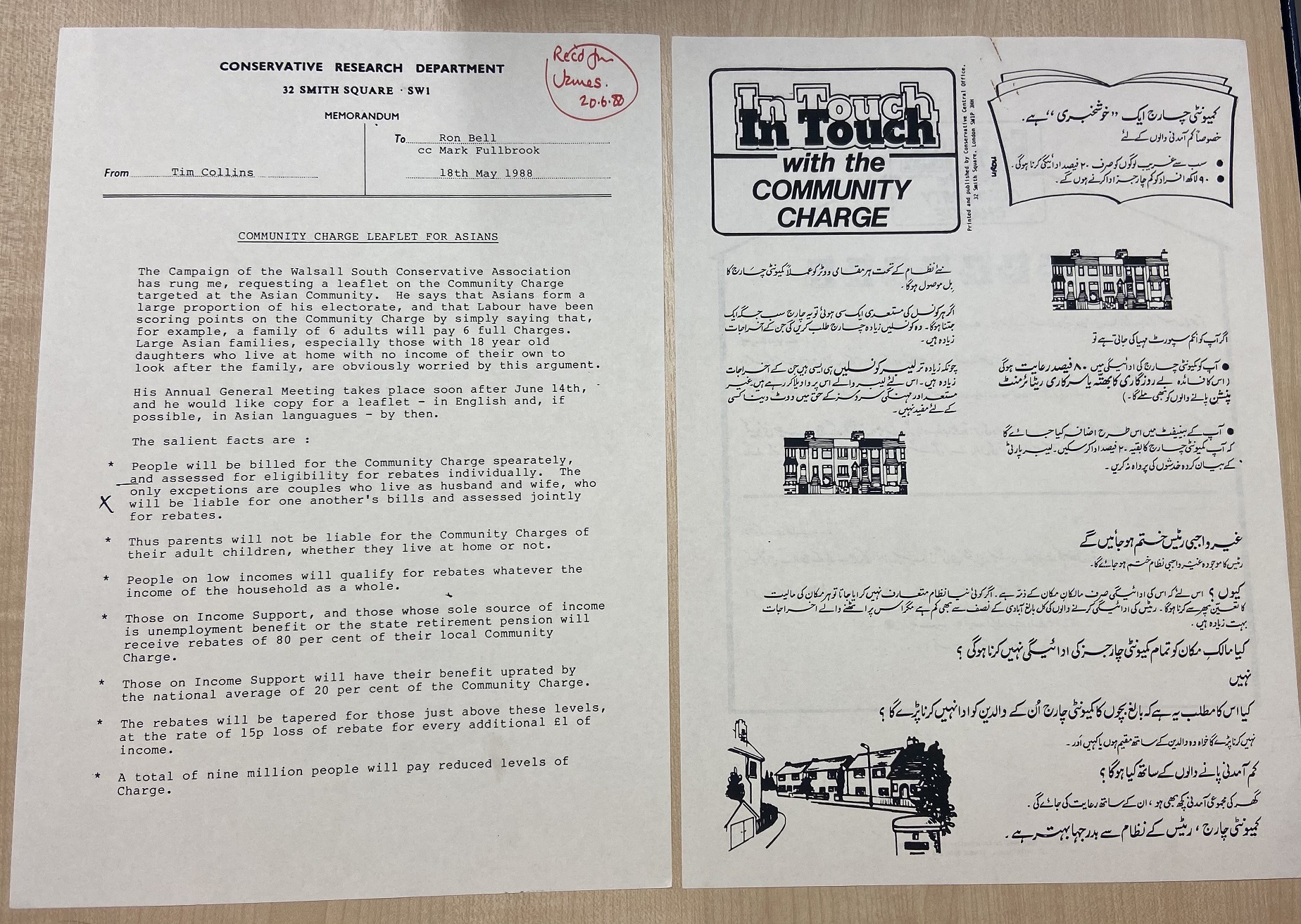 Correspondence and a draft leaflet relating to the Community Charge and the Asian Community, 1988 – CPA CCO 500/61/10

One of the largest areas of new material within the Organisation Department catalogue is European Campaigning and Elections. In addition to publicity files similar to those outlined above, such as posters, leaflets, and correspondence, this sub-series includes files on conferences, visits to the European Parliament, and press conferences. A particularly interesting event covered within this material is the 1975 referendum which asked whether or not the UK should remain a member of the European Communities. Over 67% of voters voted to remain, potentially swayed by posters such as these, campaigning for voters to choose to ‘Keep Britain in Europe’. 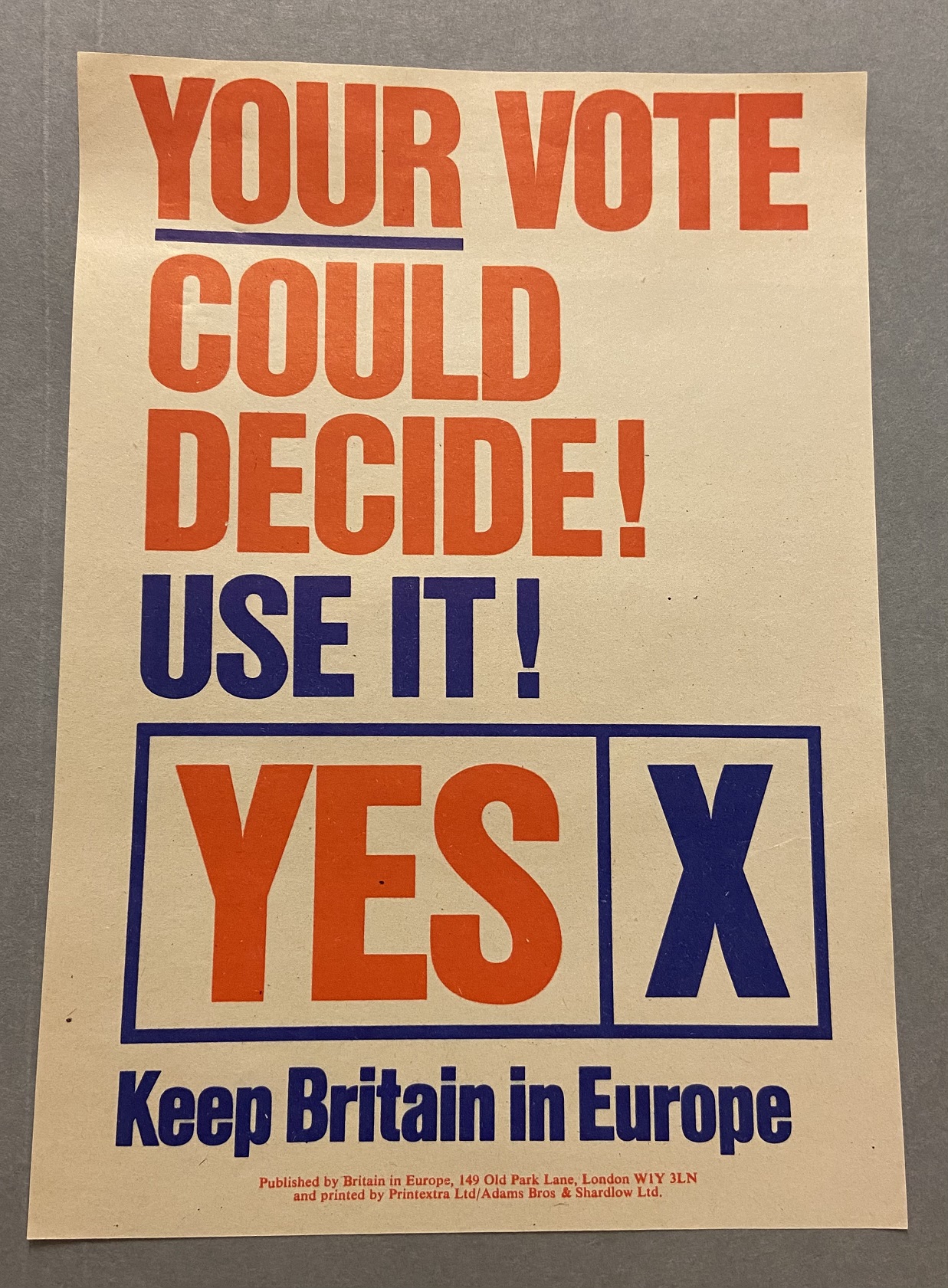 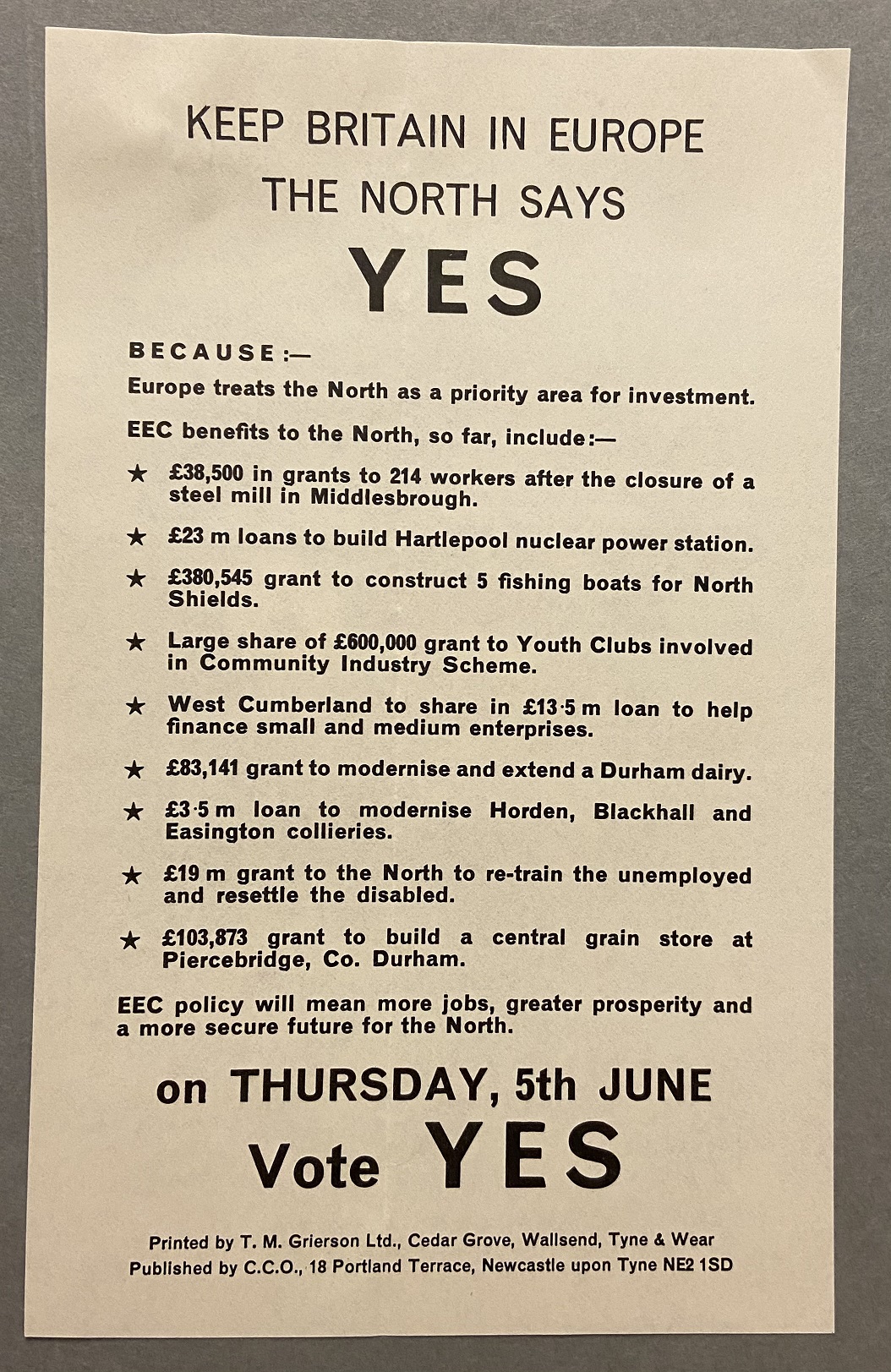 General Election reviews were carried out by the Organisation Department following each General Election and reviewed every aspect of the Party’s campaign and organisation. This catalogue contains these reviews from 1950 to 1970, providing thorough analyses of campaigns and the organisational efficiency of the Party – potentially a very useful resource for historians interested in these Elections. This example from 1966 highlights the types of factors assessed in these reviews, from morale of workers to the following of election law. 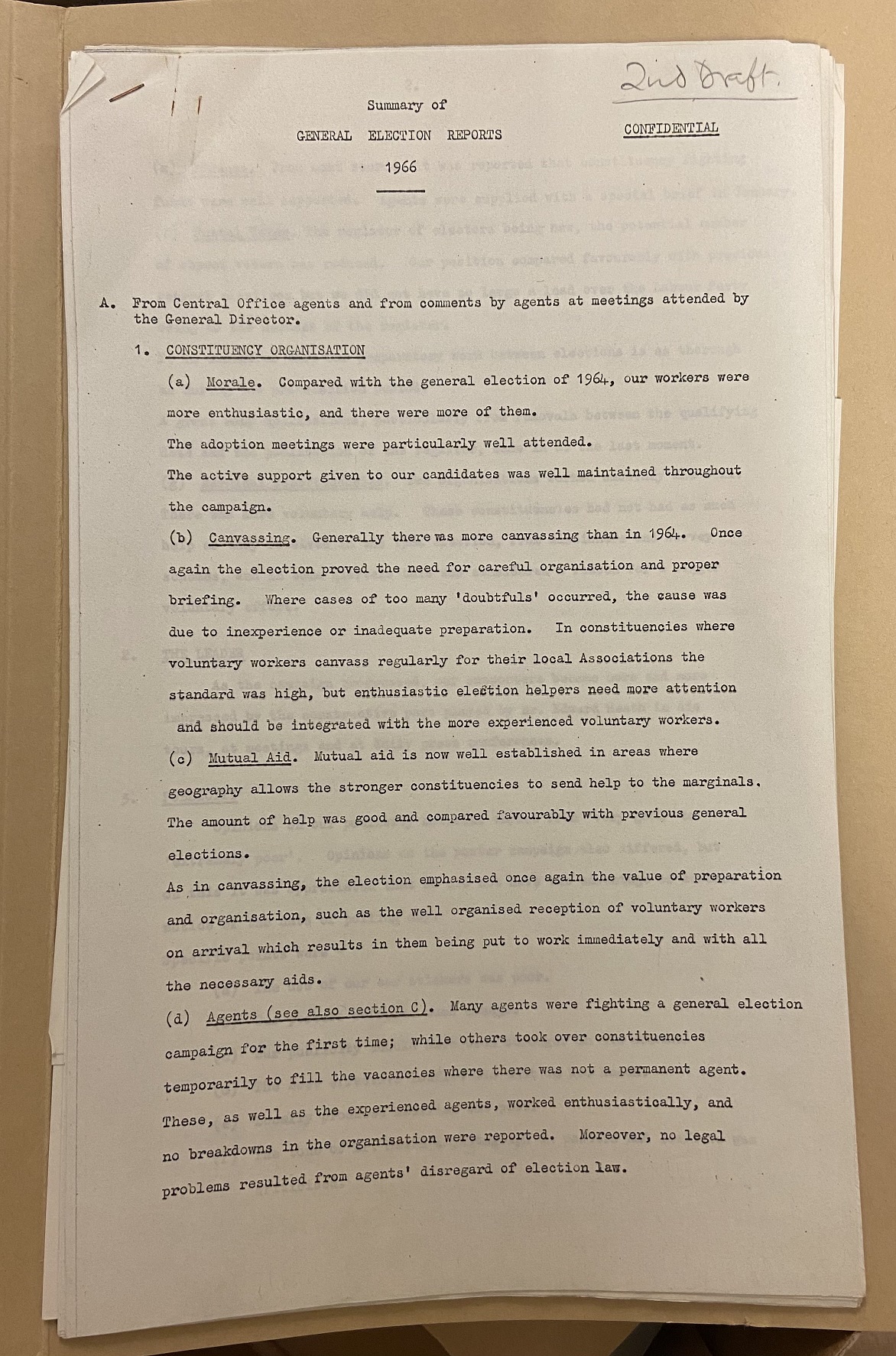 A particular highlight of the new additions to this catalogue is the correspondence of various politicians between 1937 and 1967. These include letters on an assortment of topics, from Conservative Party policy and prospective Conservative candidates for Parliament, to Sir Alec Douglas-Home’s public image and The Convention on the Political Rights of Women. Also included are a handful of letters written by Sir Winston Churchill, mostly during his years as Leader of the Opposition from 1945-1951 and written to Lord Woolton, Chairman of the Conservative Party. The example below illustrates Churchill’s irritation at the lack of canvassing in the lead-up to the 1951 West Houghton by-election, which the Labour candidate won by over 60%, giving an insight into Churchill’s involvement and interest in these elections and his opposition to the ‘essence of defeatism’ described in his letter. Another letter written by Churchill, also within this file, shows his consideration of a proposal in 1946 to create ‘The Union Party’, comprising Unionists from across the political parties, as a ‘united Party against Socialism’, providing another insight into his thoughts and plans during this time. 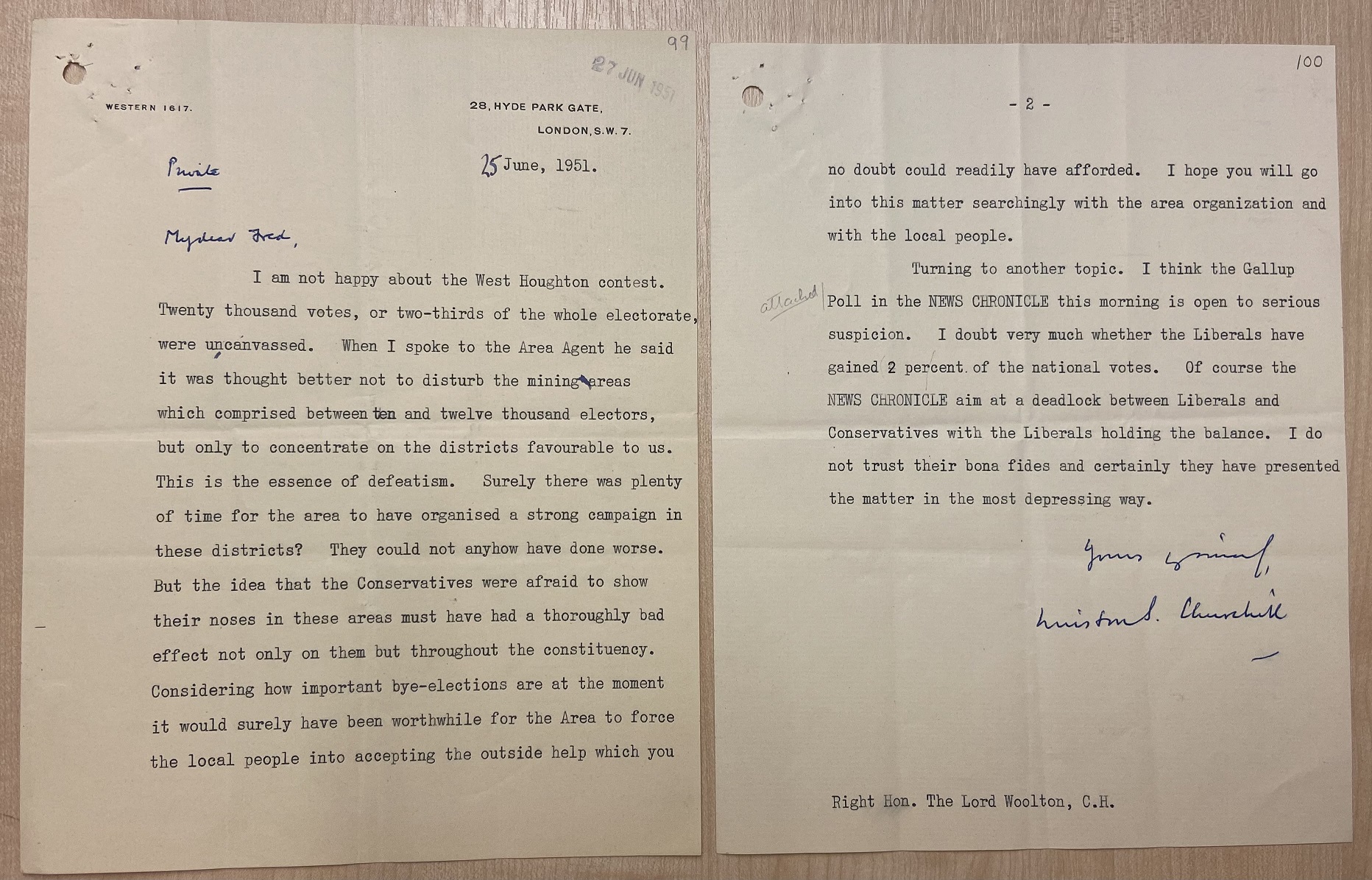 A final area of the catalogue which has been widely expanded is the monitoring of other political parties, including the Labour Party, Liberal Party, SDP, and Communist and Far-Left Parties. These files largely consist of reports on the activities of these parties, copies of their leaflets and other campaigning materials, and newspaper articles concerning their actions and policies. This example of a report on SDP activities from the 1980s demonstrates the type of work carried out by the Organisation Department to monitor their opponents, including information on key figures within the SDP, rallies and major public meetings organised by the Party, and a list of defectors from the Conservative Party to the SDP. 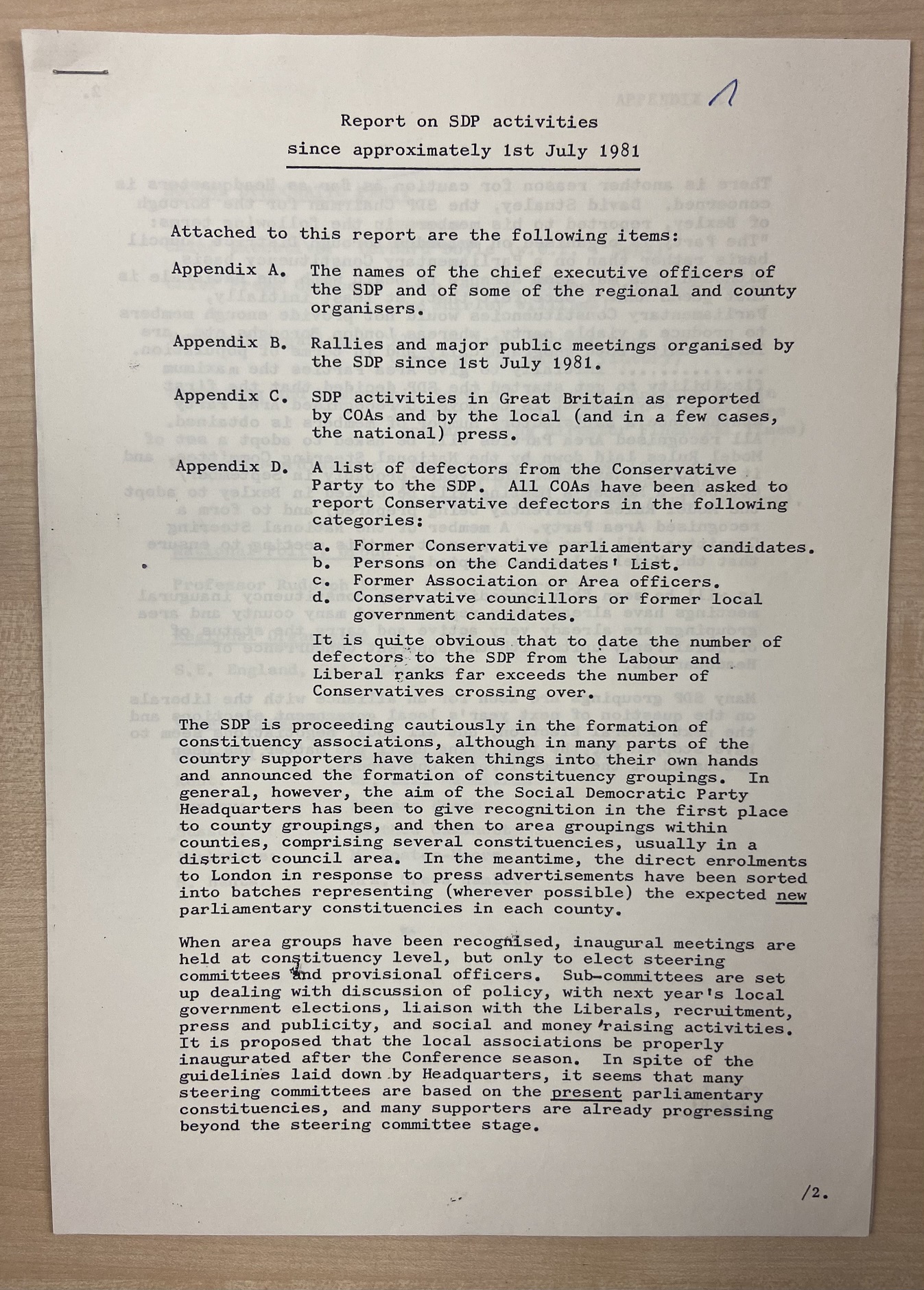 The Bodleian is one of the 6 legal deposit libraries in the UK. One of my projects this year as a graduate trainee digital archivist on the Bodleian Libraries’ Developing the Next Generation Archivist programme is to help curate special collections in the UK Web Archive. Since May I’ve been working on the Gender Equality collection. Please note, this post also appears on the British Library UK Web Archive blog.

Why are we collecting?

2018 is the centenary of the 1918 Representation of the People’s Act. UK-wide memorials and celebrations of this journey, and victory of women’s suffrage, are all evident online: from events, exhibitions, commemorations and campaigns. Popular topics being discussed at the moment include the hashtags #timesup and #metoo, gender pay disparity and the recent referendum on the 8th Amendment in the Republic of Ireland. These discussions produce a lot of ephemeral material, and without web archiving this material is at risk of moving or even disappearing. As we can see gender equality is being discussed a lot currently in the media, these discussions have been developing over years.

If we search UK web content relating to gender equality we will generate so many results; for example, organisations have published their gender pay discrepancy reports online and there is much to engage with from social media accounts of both individuals and organisations relating to campaigning for gender equality. It becomes apparent that when we browse this web content gender equality means something different for so many presences online: charities, societies, employers, authorities, heritage centres and individuals such as social entrepreneurs, teachers, researchers and more. 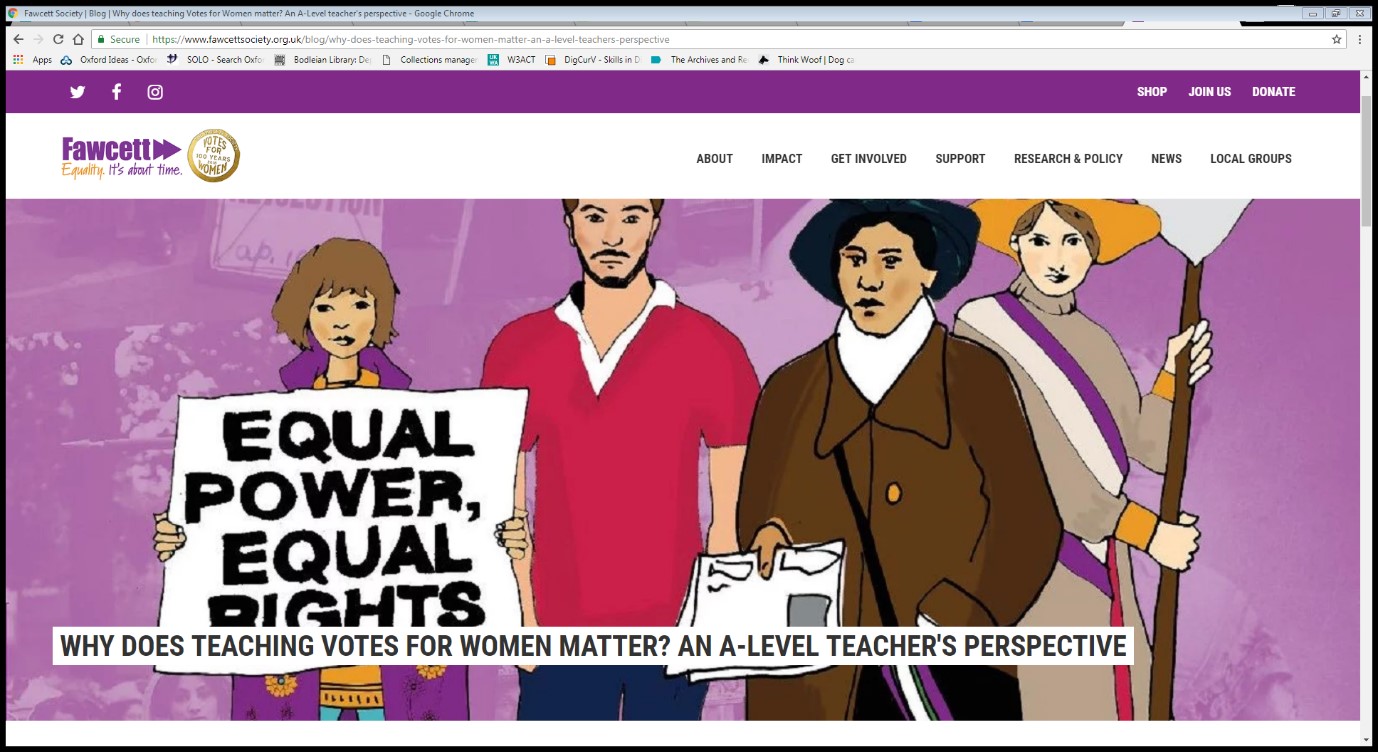 What we are collecting?

The Gender Equality special collection, that is now live on the UK Web Archive comprises material which provides a snapshot into attitudes towards gender equality in the UK. Web material is harvested under the areas of:

100 years on from women’s suffrage the fight for gender equality continues. The collection is still undergoing curation and growing in archival records – and you can help too!

How to get involved?

If there are any UK websites that you think should be added to the Gender Equality collection then you can take up the UK Web Archive’s call for action and nominate.

Proxy Mode is an ‘offline browsing’ mode  which provides an intuitive way of checking the quality and comprehensiveness of any web-archived content captured. Proxy Mode enables you to view documents within an Archive-It collection and ascertain which page elements have been captured effectively and which are still being ‘pulled’ from the live site.

Why Use Proxy Mode?

Carrying out QA (Quality Assurance) without proxy mode could lead to a sense of false reassurance about the data that has been captured, since some page elements displayed may actually present those being taken from the live site as opposed to a desired archival capture. Proxy Mode should therefore be employed as part of the standard QA process since it prevents these live-site redirects from occurring and provides a true account of the data captured.

Proxy Mode is easy to setup and involves simply downloading an add-on that can be accessed here. There is also an option to setup Proxy Mode manually in Firefox or Chrome.

Whilst using Proxy Mode a couple of members of the BLWA team (myself included) had issues viewing certain URLs in Proxy Mode often receiving  a ‘server not found’ error message.  After corresponding with Archive-It I discovered that Proxy Mode often has trouble loading https URLs. With this in mind I loaded the same URL but this time removed the ‘s’ from https and reloaded the page. Once Proxy Mode had been enabled this seemed to rectify the issue.

There was one particular instance however where this fix didn’t work and the same ‘server not found’ error message returned, much to my dismay! Browsers can sometimes save a specific version of the URL as the preferred version and will direct to it automatically. I discovered it was just a case of clearing the browser’s: cache, cookies, offline website data and site preferences. Once this had been done I was able to load the site once again using Proxy Mode #bigachievements.