Today is officially ‘world backup day’, apparently. Time to back up your files…

I’m sure you know why, and perhaps even how. There are a few tips here if you want them: http://www.worldbackupday.net/

My neighbour is a self-employed architect. He has worked digitally for at least ten years and now most of his work is done on either his old (but still perfectly serviceable) ThinkPad or a shiny new desktop PC. He works with a couple of different CAD packages along with some tax software and MS Office, all on Windows XP.

Recently, knowing what I do for a living, he asked if I could help with a problem he was having retrieving files from an external hard drive and, being easily persuaded by the promise of food and wine, I agreed to try to help (with all the usual caveats about probably not knowing anything about it all!).

We got the disk drive working quickly (this is often the way when solving other people’s computer issues. Sit with them and they’ll solve it themselves!) and so he asked me about his backups too – which should have been happening regularly to another external drive, but were not. I checked out the drive and found an old directory with a very uninformative name that contained some data files and a few manifests that didn’t make much sense. I’ve forgotten the name already, but he told me this was the name of the backup software. Searching, this software was not on the PC. The new PC had been recently built on the basis of the old one by an outsourced IT support. They’d done a good job restoring the software, etc. but this one backup program (a commercial one) was missing.

The consequences where two-fold:

1) No backup was running
2) the data files (about 1.4GB worth) and manifest were, without the software, entirely unreadable.

My neighbour thought perhaps the backup software was about so he’d ask the IT support to install and configure it. I fired up MS Windows Backup (the first time I’ve ever used it – it seems OK) and ran a one off backup of his work, just to be on the safe side and suggested he ask his support about that (one thing you must never do is undo or override the work of the real support person!) too – it required a password to add it to Windows scheduler.

After it completed, he astutely asked where the files had gone, and so I showed him, on the external drive and was dismayed to find that Windows Backup had also dumped all the files into a 1.4GB (proprietary?) container. I wondered if we’d ever have to extract files from Windows Backup files and made a mental note to keep a copy of the software (bundled with XP) in the cupboard just in case! Worse, it was then impossible to reassure him that the files were there without a crash course in Windows Restore. Still, I remember MS Backup and Restore being a pain way back to MS-DOS! 🙂

As we finished our wine and talked about these things, he seemed to suddenly remember my job and jumped up, rummaged in a cupboard. He pulled out an old tape cartridge: 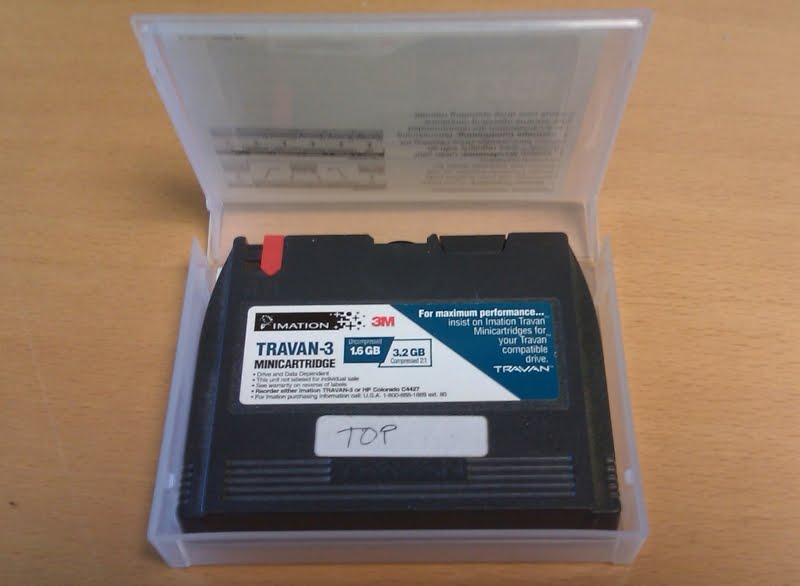 Once his main backup media, but, like the files on the external drive, no longer usable. This time both the hardware and the software were long gone. He didn’t seem worried – the files has probably been migrated off his old machine to the new one at some point – but still he wondered what was on it and said “I don’t suppose it is readable now is it?”. He hadn’t meant it as a challenge, but I couldn’t resist! I convinced him to let me take the tape with me and try to recover his data – all in the name of digital archaeology, of course!