Mabel FitzGerald is today perhaps best known for her research into breathing at high altitude, in particular, for her work with J. S. Haldane and C. G. Douglas of Oxford, Y. Henderson of Yale, and E. C. Schneider of Colorado College on the Anglo-American expedition to Pikes Peak, Colorado.

During this expedition in Summer 1911, FitzGerald worked in Colorado Springs and then travelled Colorado’s mining towns to conduct research on the breathing of mining town residents over a range of altitudes from 6,000 to 10,780 feet above sea level, while her fellow researchers stayed at the summit house of Pikes Peak (14,110 feet above sea level) to investigate the process of acclimatisation of breathing to high altitude oxygen levels.

On 18 July 1911, about a week into the expedition, Mabel FitzGerald, writes from Colorado Springs to her sister Laura in Oxford: 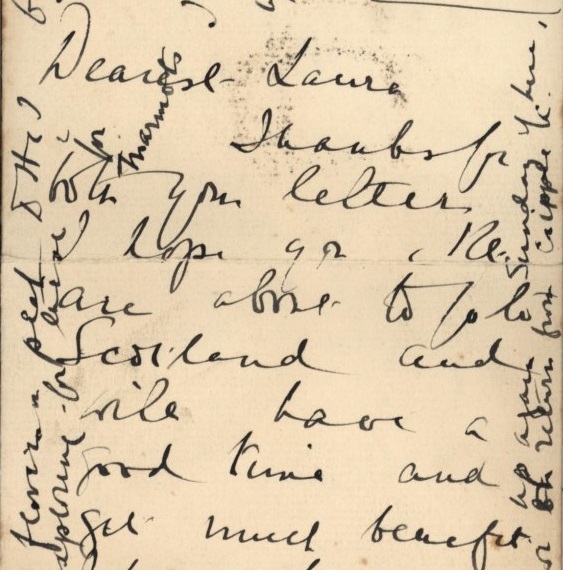 Written at the very early stages of the Pikes Peak Expedition, shortly after FitzGerald’s first brief visit to her colleagues at their temporary summit house laboratory on 16th July, the letter offers some wonderful insights into the day-to-day practicalities facing the researchers, FitzGerald’s own involvement as well as the more humdrum aspects of life during this time.

The letter does much to assert FitzGerald’s passion for science and scientific research as well as her sheer determination to continue in her scientific pursuits despite, or perhaps because of, the lack of such opportunities afforded to women at the time. Opening with a reference to the fact that she had been putting in a considerable number of hours in the laboratory, commencing work at “8.30 and leaving at about 8pm!”, FitzGerald describes a little later on (2r):

“I have not had a minute to do anything – but am enjoying the work immensely as we really are having great fun. Everyone is enjoying everything that comes along.”

Complaining of a slight headache she reassures her sister, (2r)

“…this is such a delightful experience that I do not regret decision.”

Part of the experience was a little self-experimentation where she walked with Dr Haldane, after dinner, up and down the steep part of the track from the summit which was used by her co-researchers as part of their experiments (2v)

“to see the effect on me. I could do it comparatively easily with heart going at 130. While his heart was only going at 96. And he was blowing and puffing!”

Indeed, it seems the men initially fared generally less well with FitzGerald ascribing a headache to Haldane and she states how Douglas “was laid low and Schneider did not know if he could hold on at all” with Henderson being the quickest to recover from the effects of altitude (2v). 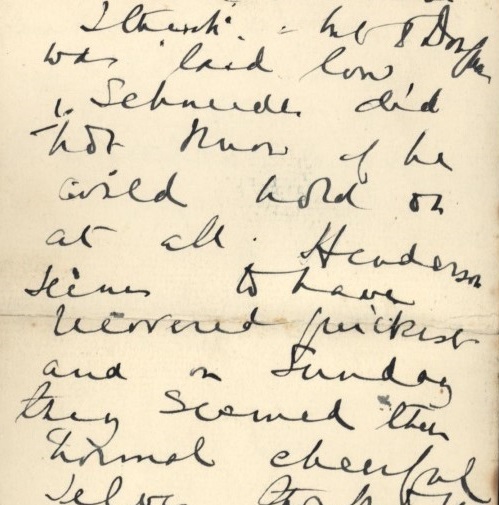 Self experiments at Pikes Peak summit

While anticipating her own departure for Cripple Creek the following day Mabel appears to be armed solely with a letter of introduction from the president of the Portland mine in order to aid her in gaining entry into what was “a big gold mine which is the most difficult to get into” (3r).  Here she would monitor the breathing of mine workers and others living in the area.
Cripple Creek was one of the most significant mining regions in Colorado and at its peak in 1900 it was home to some 500 mines. Big mines like Portland, employing 700 workers, were connected to the railway, but some of the small mining camps FitzGerald set out to visit were very remote, and could only be reached on horseback or by foot. 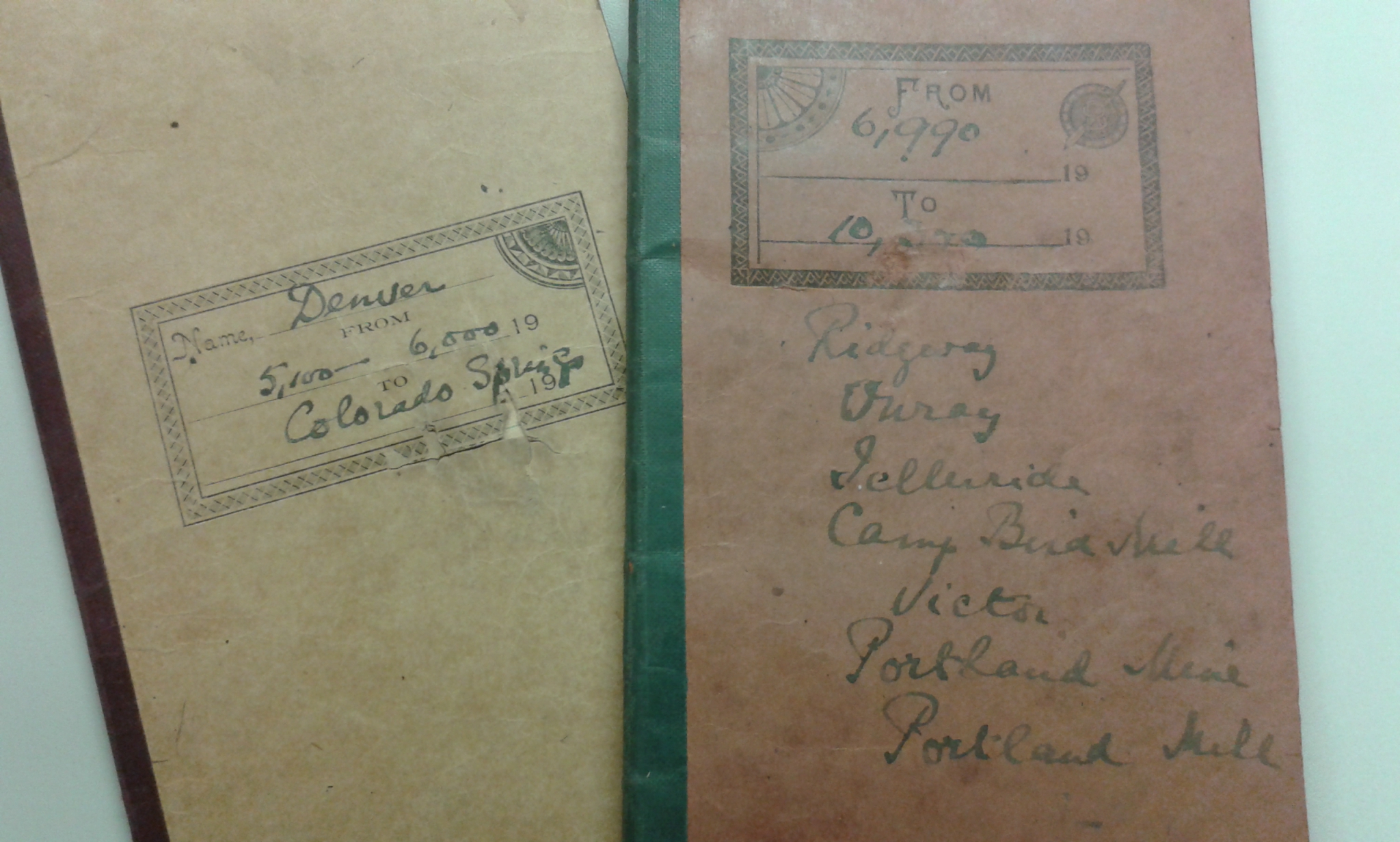 This is in stark contrast to the Pikes Peak summit which boasted its own hotel accessed by cog railway and which afforded the men some home comforts for the duration of their work. FitzGerald describes how the summit house had granted them a private dining area “serving all the delicacies of the season” and bedrooms opening onto the laboratory (2v).

There was, however, the peril of the many day trippers who made the journey to the summit by rail. To keep them from disrupting the experiments in the laboratory, a practical measure was instituted by the team: 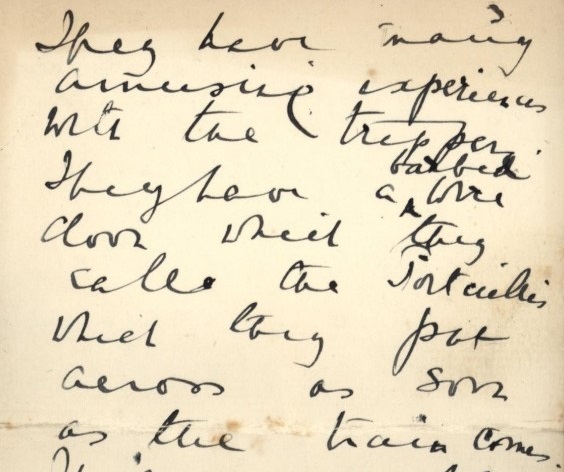 “They have a barbed wire door which they call the portcullis which they put across as soon as the train comes” (3r). But this method of defence was clearly not fool proof as FitzGerald tells of how a lady asked to leave her hat in the laboratory which, she remarks, was “a huge one with trailing ostrich feathers. She thanked them for the ‘accommodation’ when she fetched it. We could just control our laughter til after she had gone” (3v). 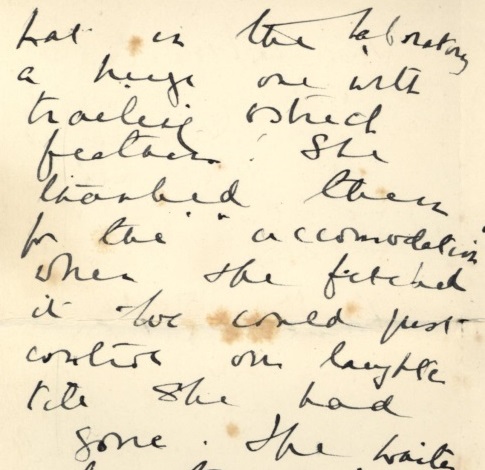 Another aspect of life at Pikes Peak summit house which FitzGerald highlights, and one that would no doubt be greatly missed upon her departure for Cripple Creek, was the matter of the ice-cream soda fountain which had become a regular feature of daily life. FitzGerald describes how “we sat in a row at one each day before the evening meal having no means of getting tea at the laboratory” (3v). Such an image of camaraderie and good humour shows scientists working together at their best.