Another snippet from the Percy Manning archive, this time from his ‘Oxford Collections’ scrapbooks which contain notes, newspaper clippings and assorted ephemera on topics ranging from Academic Halls to Earthquakes to Knucklebone Floors, to Lady in the Wall to …. Well, it’s wonderfully diverse!

This one is a simple clipping from the Oxford Times of 21 July 1888, and a chilling reminder of where the saying ‘you might as well be hung for a sheep as a lamb‘ comes from. A compendium of executions carried out in Oxford between 1778-1888, it lists 44 men and their capital crimes, which range from murder to… sheep-stealing. 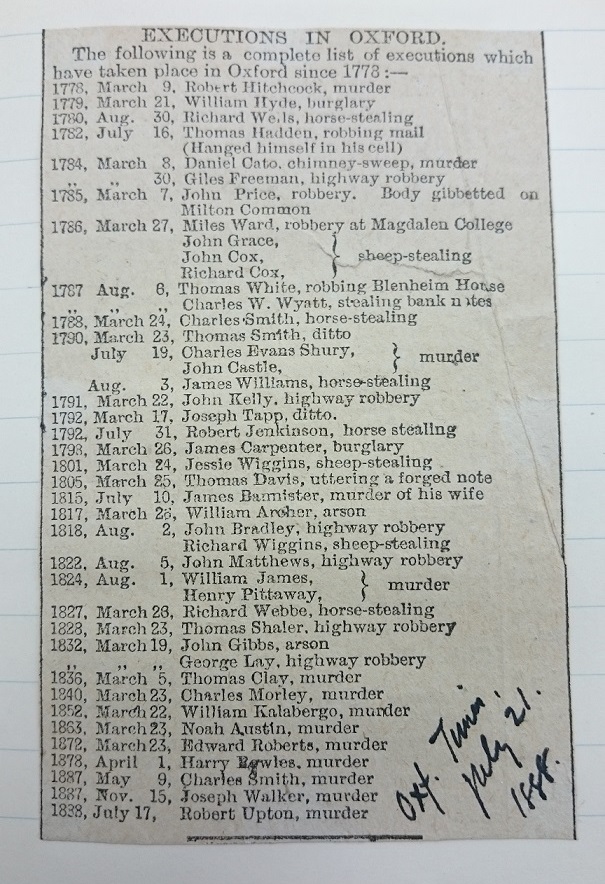 John Grace, John Cox and Richard Cox were executed on the 27th of March 1786 for stealing sheep (joined at the gibbet by Miles Ward, whose crime was robbing Magdalen College, Oxford); Jessie Wiggins was executed for stealing sheep on the 24th of March 1801 and Richard Wiggins (a relative?) on the 2nd of August 1818. There are five horse thieves too, the last of whom was executed as late as 1827, after which the list of crimes men are executed for narrows sharply to highway robbery, arson and murder.

It’s perhaps interesting that no women were executed – it’s likely that they were transported instead – although one woman is listed, poor Mrs. Barmister, whose husband James was executed for her murder on the 10th of July 1815.

The list also includes Thomas White, who robbed Blenheim House (Palace?), and Charles Walter Wyatt, the postmaster of Witney, whose crime was stealing money from his customers’ mail. They were executed together at Oxford Castle on the 6th of August 1787 in front of ‘a prodigious assemblage of spectators’. Manning’s scrapbook includes a description of their deaths copied from Gentleman’s Magazine. 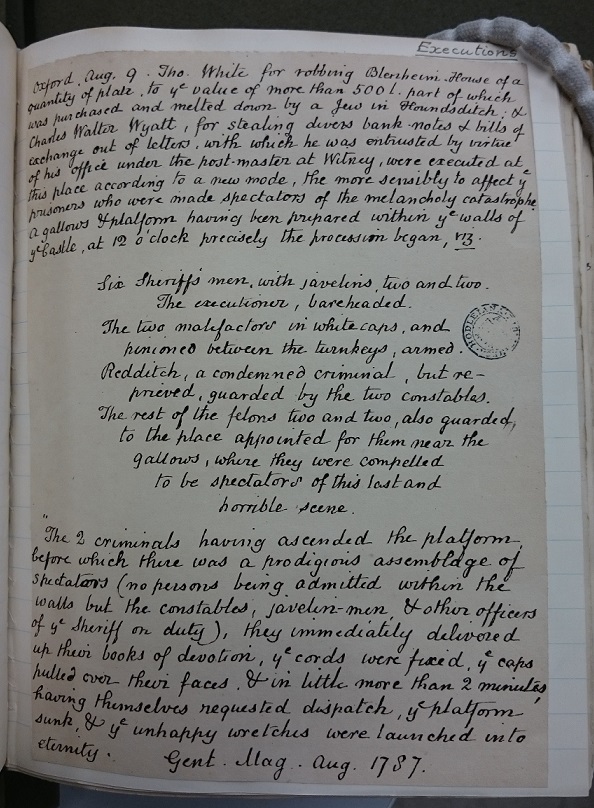 These two particular deaths were notable because they were executed

…according to a new mode, the more sensibly to affect the prisoners who were made spectators of the melancholy catastrophe

Literally spectators – their fellow prisoners were compelled to stand near the gallows and watch. And then

the cords were fixed, the caps pulled over their faces & in little more than 2 minutes having themselves requested dispatch, the platform sunk & the unhappy wretches were launched into eternity

Unfortunately though, it looks like the Oxford Times list of 1888 is incomplete. The Oxfordshire History Centre has a fuller list here (taken from Oliver’s City of Oxford Almanack, 1929) and it adds more sad detail, including more sheep and horse thieves like Joseph Wren, aged only 17, who was executed in March 1783 for stealing a horse, bridle and saddle. And William Bowler, aged 23, executed in the same month for stealing a single sheep. Yes. Just one.

Using the Oxfordshire Record Office list for the period 1778 to 1836, I tallied:

After 1836 people were executed for murder alone, 13 more executions up to 1921. 18 murders in 144 years seems like quite a small number, somehow (perhaps I’ve been watching too much Morse). Then again, nobody in these lists is being executed for manslaughter or any other killing offence. In Oxford’s courts, it seems, ending somebody’s life really did mean less risk to your neck than nicking that proverbial lamb. Grim.