DV has a track width of 10 microns and a tape speed of 18.81mm/sec. It can be found on any type of DV cassette, regardless of branding, although most commonly it is the format used on MiniDV cassettes.
Recognition
DV cassettes are usually found in the small size, known as MiniDV. Medium size (97.5 × 64.5 × 14.6 mm) DV cassettes are also available, although these are not as popular as MiniDV. DV cassettes are labelled with the DV logo.
DVCPRO (encoding)
DVCPRO is Panasonic’s enhancement of the DV format, which is aimed at a professional market. DVCPRO uses the same encoding as DV, but it features ‘locked’ audio, and uses 4:1:1 sampling instead of 4:2:0. It has an 18 micron track width, and a tape speed of 33.82 mm/sec which makes it more robust. DVCPRO uses Metal Particle (MP) tape rather than Metal Evaporate( ME) to improve durability.

DVCPRO 50 and DVCPRO HD are further developments of DVCPRO, which use the equivalent of 2 or 4 DV codecs in parallel to increase the video data rate.

Any DV cassette can contain DVCPRO format video, but some are sold with DVCPRO branding on them.

DVCPRO labelled cassettes have different coloured tape doors depending on their type; DVCPRO has a yellow tape door, DVCPRO50 has a blue tape door, and DVCPRO HD has a red tape door.

Images of DVCPRO cassettes are available at the Panasonic website. 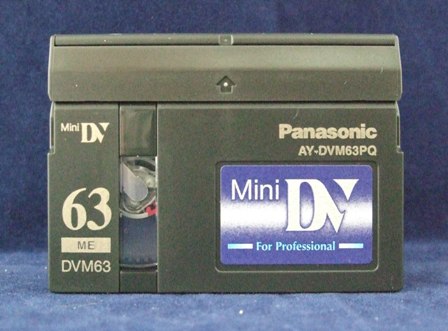