‘I will not disguise from the House, as I have not attempted to disguise from the country, the deep disappointment of the Government and, I think, of the whole nation, at the turn of events. […] If the European vision has been obscured, it has not been by a minor obstruction on one side or the other. It was brought to an end by a dramatic, if somewhat brutal, stroke of policy.’ ( HC Deb. 11 Feb 1963, vol. 671, fols. 943-1072.)

Speaking at a parliamentary debate in February 1963 shortly after Charles de Gaulle’s veto of British membership of the European Economic Community (EEC), it is perhaps easy to understand why Harold Macmillan was quite so bitter. After close to five years of negotiation, British hopes of joining the European Union’s antecedent had just been crushed – publicly – by a former ally, President Charles de Gaulle.

Britain, the Commonwealth, and Europe

Succeeding Anthony Eden as Prime Minister in 1957, Macmillan’s six years in power spanned a period of almost unprecedented change in Britain’s geopolitical status. The Suez Crisis of 1956, which had brought down the Eden government, demonstrated to the world that Britain was no longer a superpower in comparison to the United States or Soviet Union. No longer a major imperial power or, at least, no longer the major imperial power it had been twenty years before, the country was caught in a kind of malaise. The result was a difficult period of soul-searching about where Britain’s future should lie.

By the late 1950s, Britain’s economy was also encountering problems. Although Britain remained a rich country – richer, per capita, than most of continental Europe – the disparity between the levels of economic growth in Britain and the rest of Europe were becoming increasingly obvious. In order to keep in business, British industry needed ever-increasing overseas markets for its products.

Against this difficult backdrop, Britain was caught between two centres of gravity. One the one hand, the Commonwealth pulled the country towards its traditional export markets in the former colonies. Although very informal and disorganised, the Commonwealth – and especially the ‘White Dominions’ (notably Canada, Australia, and South Africa) – appeared to offer a way for the British to keep the economic benefits of empire as well as its sentimental attachments. On the other, attempts to form an economic union in Continental Europe were viewed with a mixture of scepticism and alarm.

In March 1957, six European countries (France, West Germany, Belgium, the Netherlands, Luxembourg, and Italy) signed the Treaty of Rome, paving the way for a supra-national organisation intended to facilitate trade and political cooperation between the member-states. Macmillan faced a dilemma. Although not totally incompatible, Britain could not move towards both the Commonwealth and the EEC at the same time.

The Macmillan archives on deposit at the Bodleian provide a fascinating snapshot of the difficulties of the decision, especially in the period immediately after the signing of the Treaty of Rome. They also show Macmillan’s attempt to play a difficult double game between what he termed ‘the practical’ and ‘the idealistic’ (Bodleian, MS. Macmillan dep. c.920, fol. 21). While he could certainly dress his actions in the ideology of Europeanism, he was also acutely aware of the dangers which a united Europe would create for a disengaged Britain. 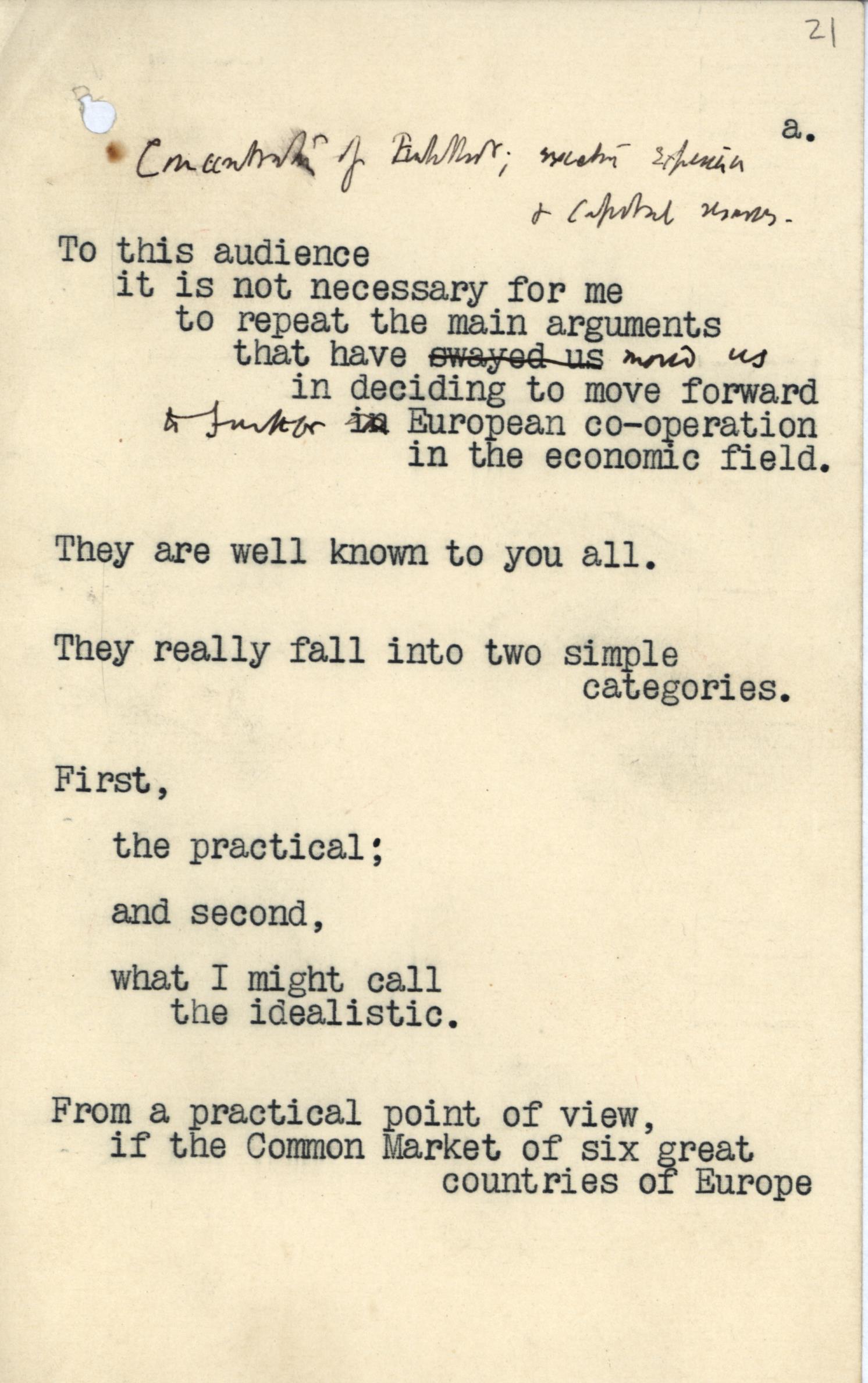 In a speech written for the European Movement Industrial Conference in February 1958, Macmillan wrote that he saw Free Trade as an ideological glue to cement unity within the Continent:

‘The European idea is gaining every day in strength and purpose. […] The Treaty of Rome is a major achievement and one which we welcome because it will bring increased prosperity and strength to our friends and partners on the Continent. We believe that it is of the greatest importance to the future of Europe that the European Economic Community should be linked from the outset with the other free countries of Europe through a Free Trade Area. Such an association could draw the European nations steadily closer together in their political and economic relations…to the immense and lasting advantage of Europe and the free world as a whole.’(Bodleian, MS. Macmillan dep. c.920, fol. 110) 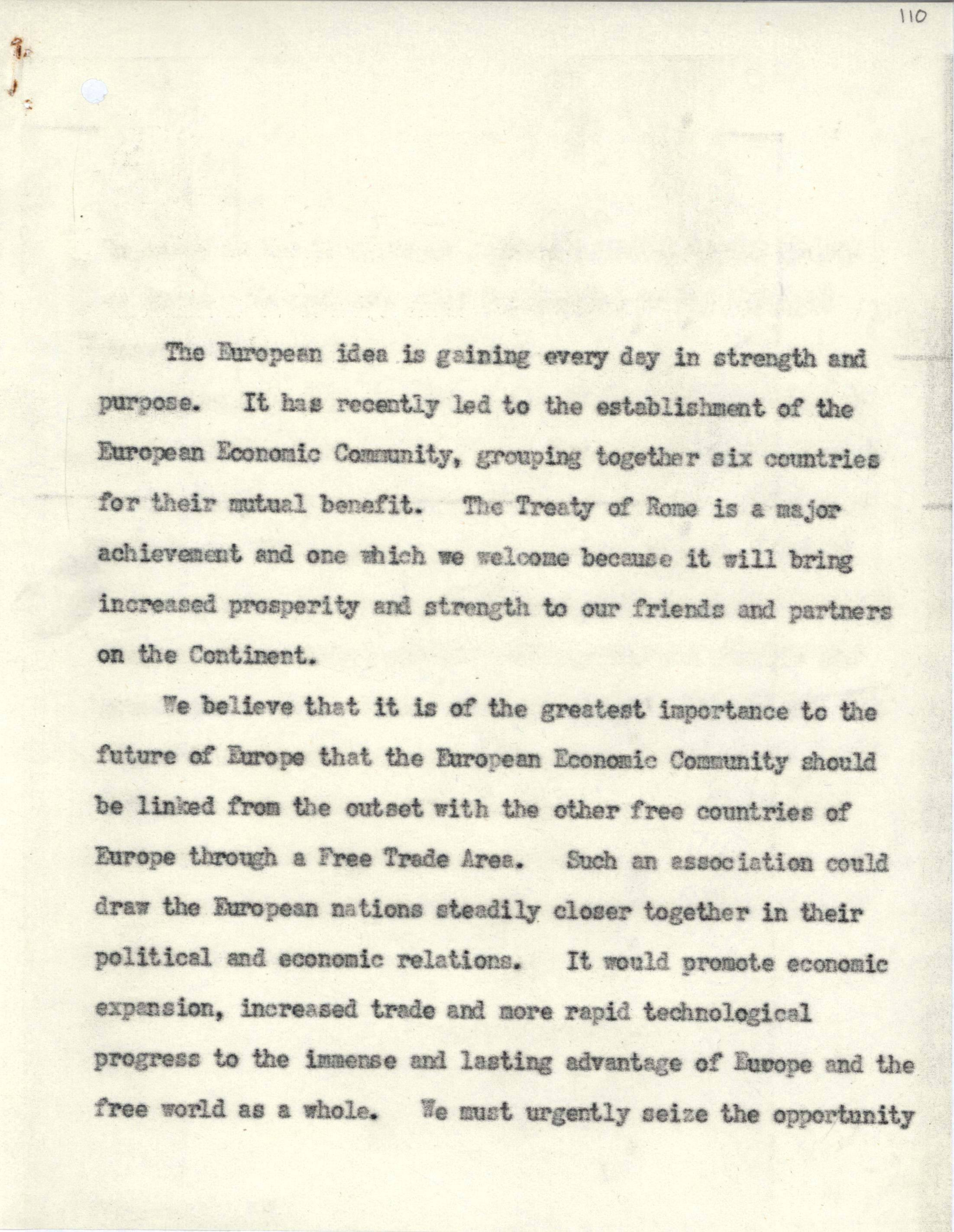 In other company, however, it was clear that his approach was much more grounded on the realities of the British position:

‘Of course it might be argued that we could use all our influence to break up the six and to prevent their plan coming into being. I think there would be great dangers in this. First of all, it would be a very wrong thing to do, and secondly, it would probably not succeed.’ (Bodleian, MS. Macmillan dep. c.920, fol. 24) 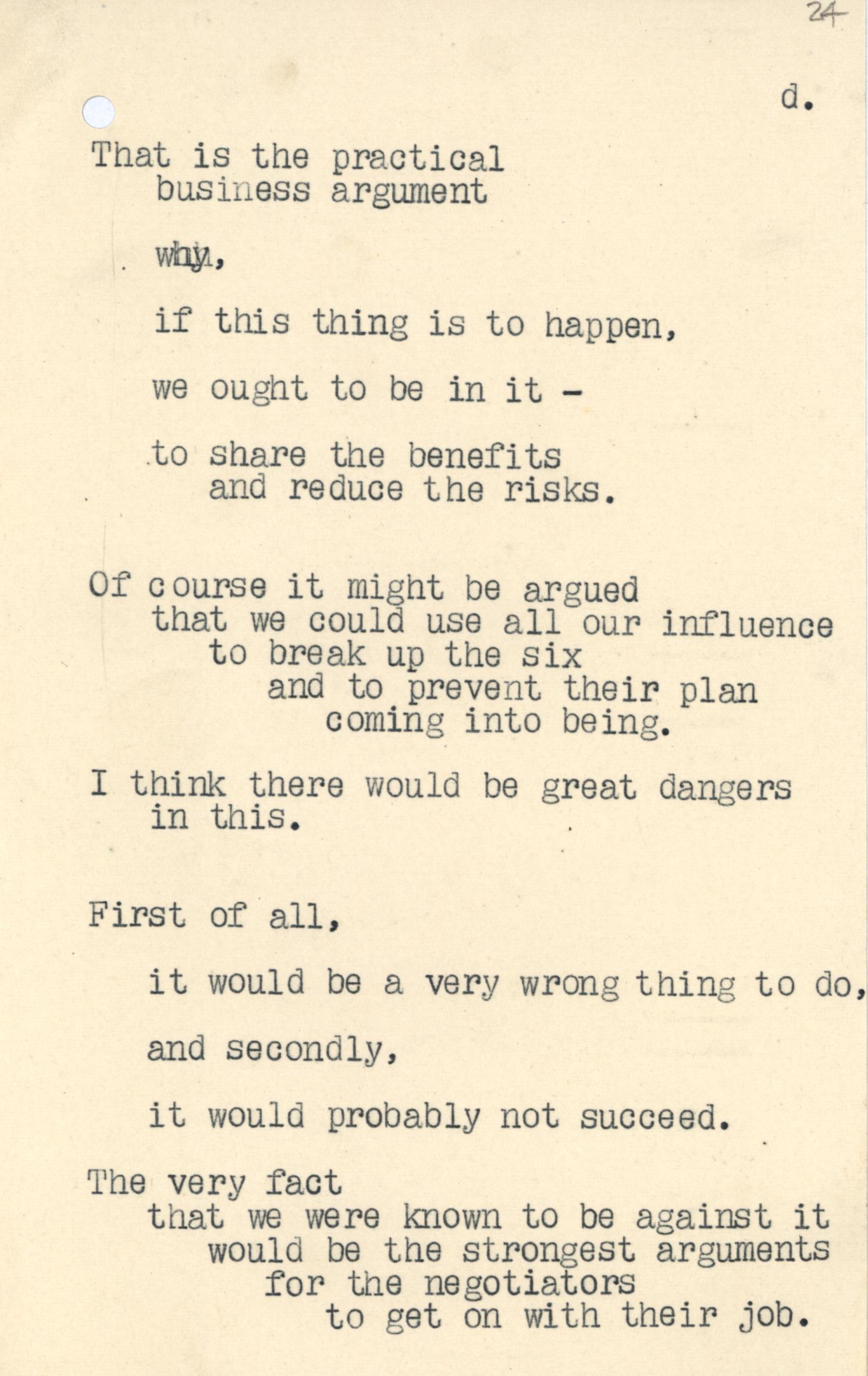 Macmillan realised that Britain could not preserve its economic and political status in Europe from outside a united Europe and, despite his reservations, began to negotiate with European leaders to get Britain in.

Informal negotiations with ‘the Six’ began in 1958. Unfortunately for Britain, the same year saw the rise to power of General de Gaulle in France. Although concerned about the escalating war in French Algeria, de Gaulle still saw British membership of the EEC as potentially damaging to France’s international position and especially to its leading role within the EEC.

Britain went to the polls in 1959 and re-elected Macmillan, giving him the mandate to formally apply for Britain to enter the EEC in 1961. Edward Heath, as Foreign Secretary, was sent to Brussels to open formal accession talks.

Politically, British discussion on EEC membership hinged on two issues: the privileged position of the Commonwealth and agricultural subsidies. Both immediately created problems. The British refused to extend Free Trade to food because this would mean removing the existing heavy subsidies given to British farmers and a rise in food prices as a result. The Six, however, also refused to allow the Commonwealth to hold onto its existing trading privileges, despite Macmillan’s attempt to use separate negotiations with the Commonwealth as leverage against the Europeans. For Macmillan, the process was deeply dispiriting. ‘I think sometimes our difficulties with our friends abroad result from our natural good manners and reticence’, he wrote in June 1958.

Gauging the public reaction to the process is difficult. The Labour Party, under Hugh Gaitskell, was certainly hostile. The Conservative Party Archive at the Bodleian does preserve a number of angry letters on the issue; many complain about the perceived ‘betrayal’ of the Commonwealth, others voiced suspicion of European motivations.
Certainly the Conservative Research Department worried that Macmillan’s ‘rational approach based on a simple analysis of our political and economic problems’ might make the attempt to join the EEC sound, publicly, like ‘an act of desperation’. (Bodleian, CRD 2/43/2)

Ultimately, however, public opinion was never put to the test. In January 1963, de Gaulle vetoed British membership of the EEC with his famous comment: ‘non’. Britain would have to wait until 1973 – and endure another humiliating French rejection – before it would finally take a seat in the EEC.

On the evening of 13 July 1962, Prime Minister Harold Macmillan removed seven Cabinet ministers, including his Chancellor of the Exchequer, Selwyn Lloyd. The action was so dramatic that the media quickly termed it after the Nazi’s ‘Night of the Long Knives’ in 1934.

Macmillan’s popularity had grown throughout the early 1950s, when ‘Supermac’ steered the country through the post-Suez era, increasing wealth and claiming ‘Life’s Better Under the Conservatives’. 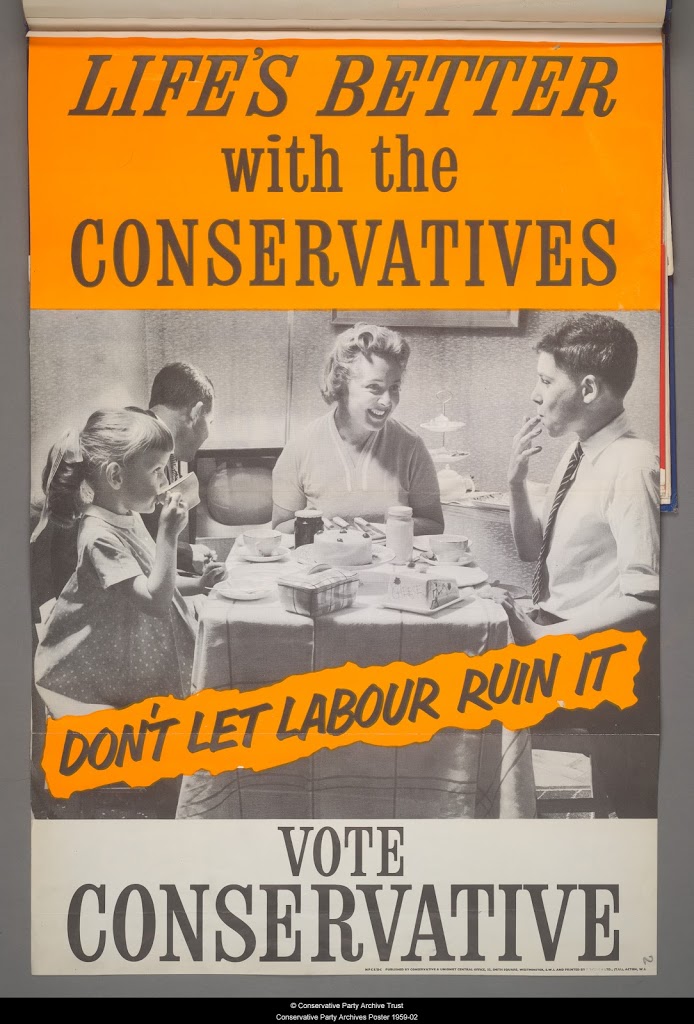 By the early 1960s, however, the tune had changed. Financial troubles, a wage freeze and divided opinion over entry into the European Community led to a drop in the government’s popularity, and the Conservatives fared poorly in local elections and by-elections. By 1963, Macmillan faced a very different environment to that of the 1950s, and divisions within the Party put pressure on him to make changes.

On the evening of 13 July, Macmillan announced that he was dismissing seven members of his Cabinet: 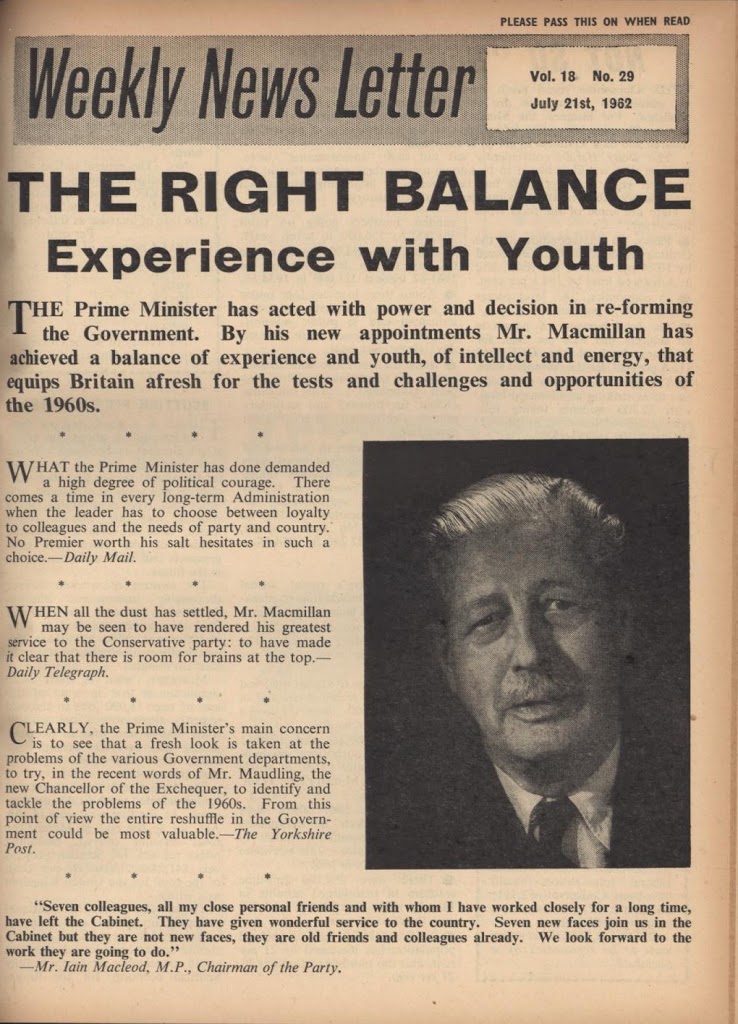 This Cabinet reshuffle, which left the National Liberals without a Cabinet position, marked the beginning of a large-scale government reorganisation that involved more than 50 people. Although Conservative press called it an act of ‘power and decision’ and Macmillan’s ‘greatest service to the Conservative Party’, many members of the public and the government deplored it as overly harsh and a sign of weakness. Macmillan’s public image was permanently damaged, and he resigned the following year due to ill health. Many members of his new Cabinet went on to influence government policy for decades.

On 29 December, 1986, Macmillan died peacefully at his home in East Sussex. He was buried 35 years ago, in January 1987. Although Macmillan had remained active in public life until his death, his admirers were offered a unique chance to praise him 1963, just before and after he resigned from the office of Prime Minister.

Macmillan took ill just before the Conservative Party Conference in October 1963 and was rushed to the hospital, where he was incorrectly diagnosed with inoperable cancer. He stepped down on the grounds of ill health (leading some to call for greater concern over the ‘heavy strain of modern conditions’), making way for Sir Alec Douglas-Home to become Prime Minister and leader of the Conservative Party.

During his health scare and directly after, the members of the Party attending the conference commented in speech after speech on the dedication of the Prime Minister and their appreciation for him. The Conference as a whole, of course, agreed upon a message ‘expressing our very deep affection and our admiration and our best wishes’ (1963 Conference Proceedings, NUA 2/1/69). The Earl of Home noted that Macmillan’s ‘sole concern is for the nation and the Party’, while the Chairman closed the conference with the words, ‘I think we have felt steadily a growing appreciation of what a wonderful Prime Minister he was.’

Macmillan had taken office in January 1957 during a particularly difficult time for the Party. Opposition was stronger than ever, and Lord Salisbury told the Party:

Others believed the PM would be only a ‘caretaker’, unable to stand up to the opposition in what was believed to be a looming election. 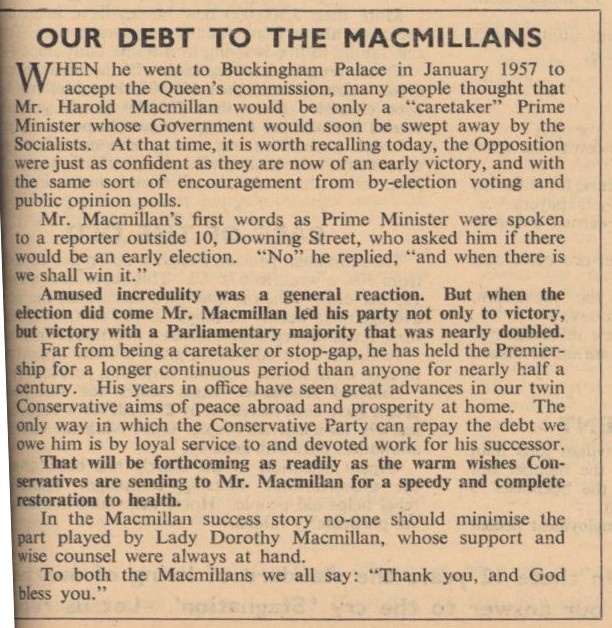 Yet Macmillan did win the next election, and served as Prime Minister for over six years. He certainly faced disappointments – the UK’s attempt to join Europe was vetoed, and his government was discredited over the Profumo affair – but his wealth of varied experience stood him in good stead as he negotiated issues of world peace and domestic economics, from the Nuclear Test Ban Treaty to independence in Africa.

Macmillan in a 1955 PPB for the Conservative Party. Macmillan proved adept at charming his country via television.

Over 200 attended his funeral in January 1987, and thousands his memorial service at Westminster Abbey. 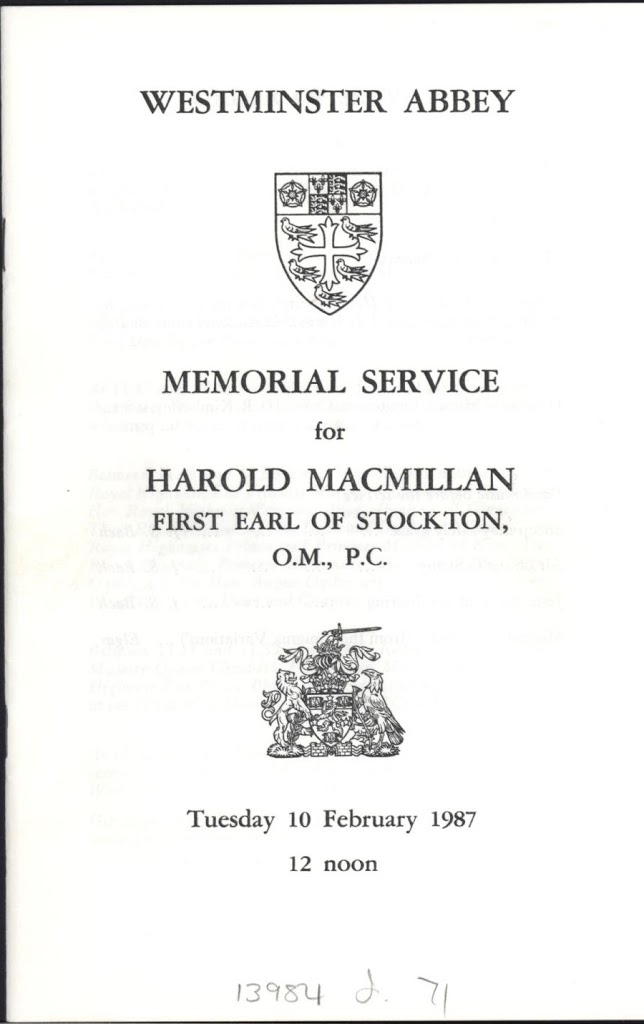 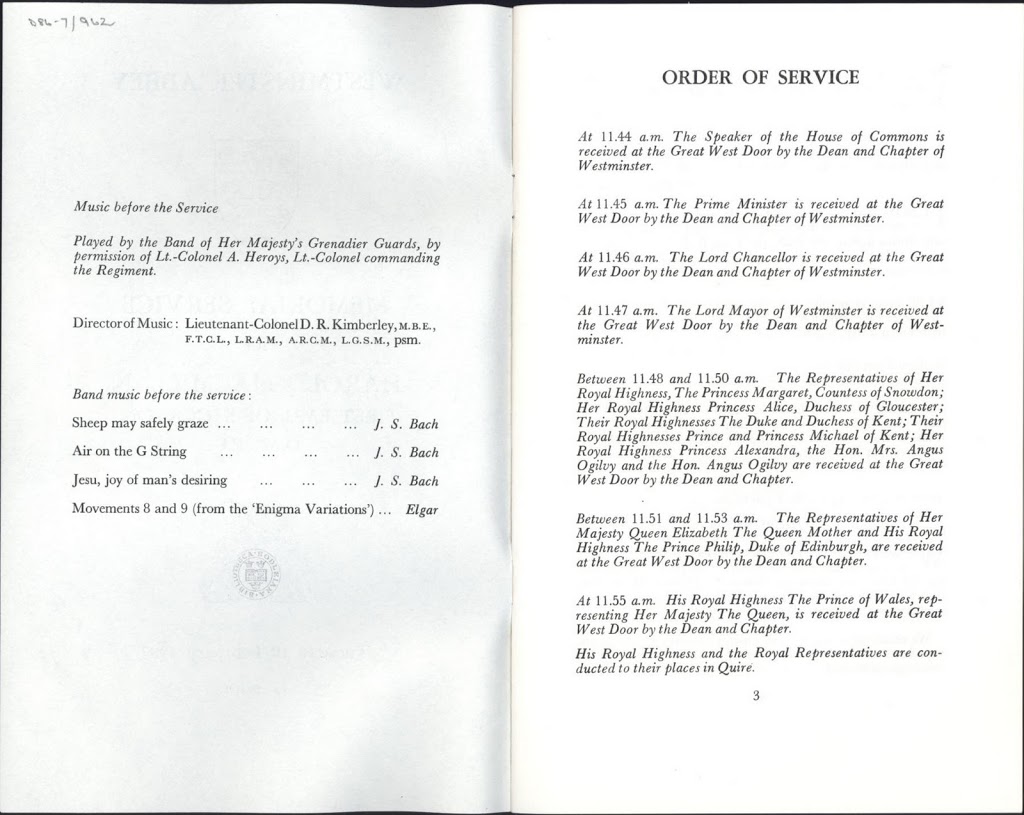 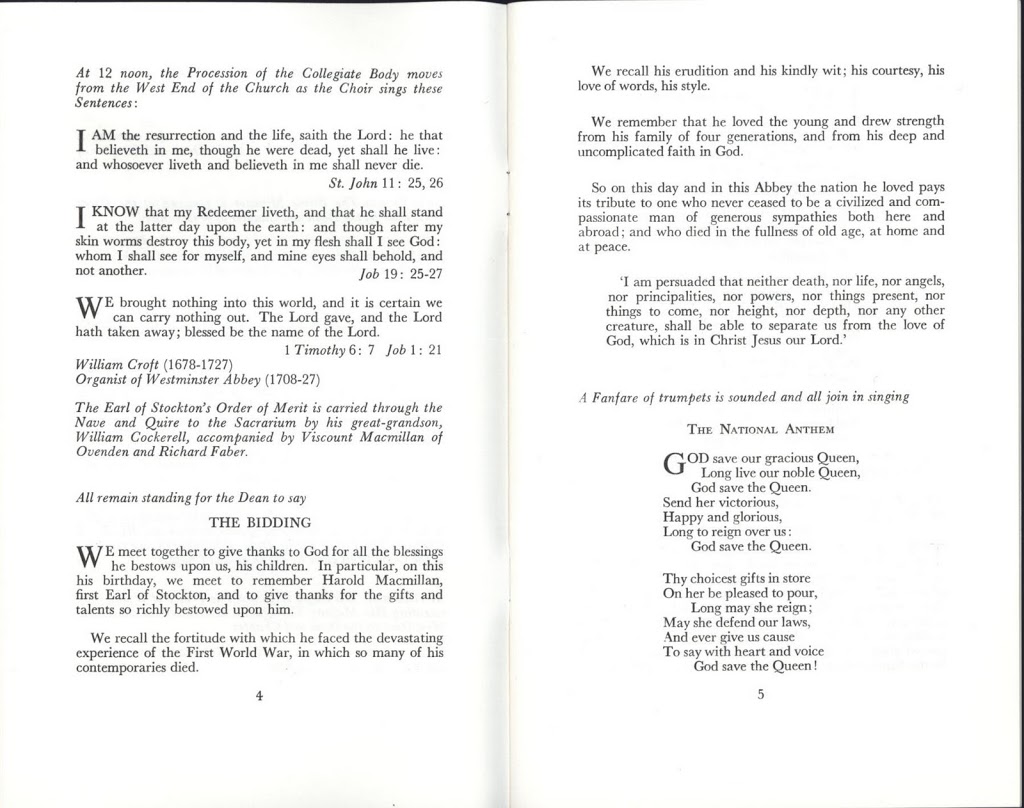