The spring sunshine Maria described in her April letter swiftly gave way to a sodden May. 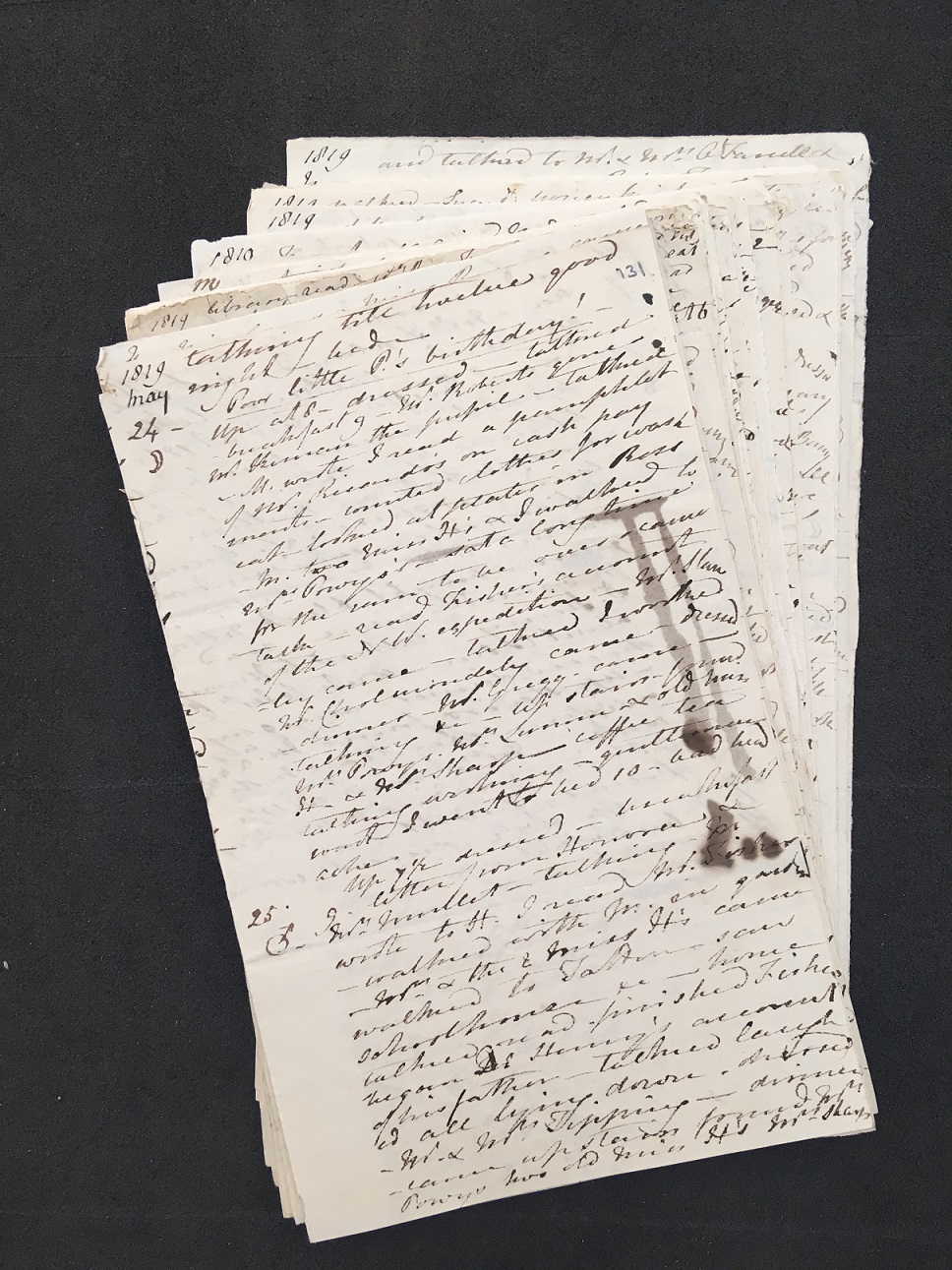 Towards the end of the month Maria Edgeworth and her half-sister Fanny (now recovered from her illness) set off on a tour of England that would last several months. Fanny began a journal documenting her and Maria’s travels – and makes frequent mention of the wet weather. It’s a conventional diary rather than the gripping drama that Maria often managed to make out of their lives. She begins on 20 May ‘Got up 7 ½ – dressed – packed […] left Byrkley Lodge’. Every activity is meticulously noted in Fanny’s far from legible hand.

There are no revelations or codes here of the kind we find in the journals of Anne Lister now being serialised in the BBC/HBO television drama, Gentleman Jack. And, if Fanny had the literary talents of her older half-sister, she did not choose to exercise them in these pages. What the journal lacks in literary merit it makes up for as evidence of the daily lives of the Edgeworth sisters whilst away from home. 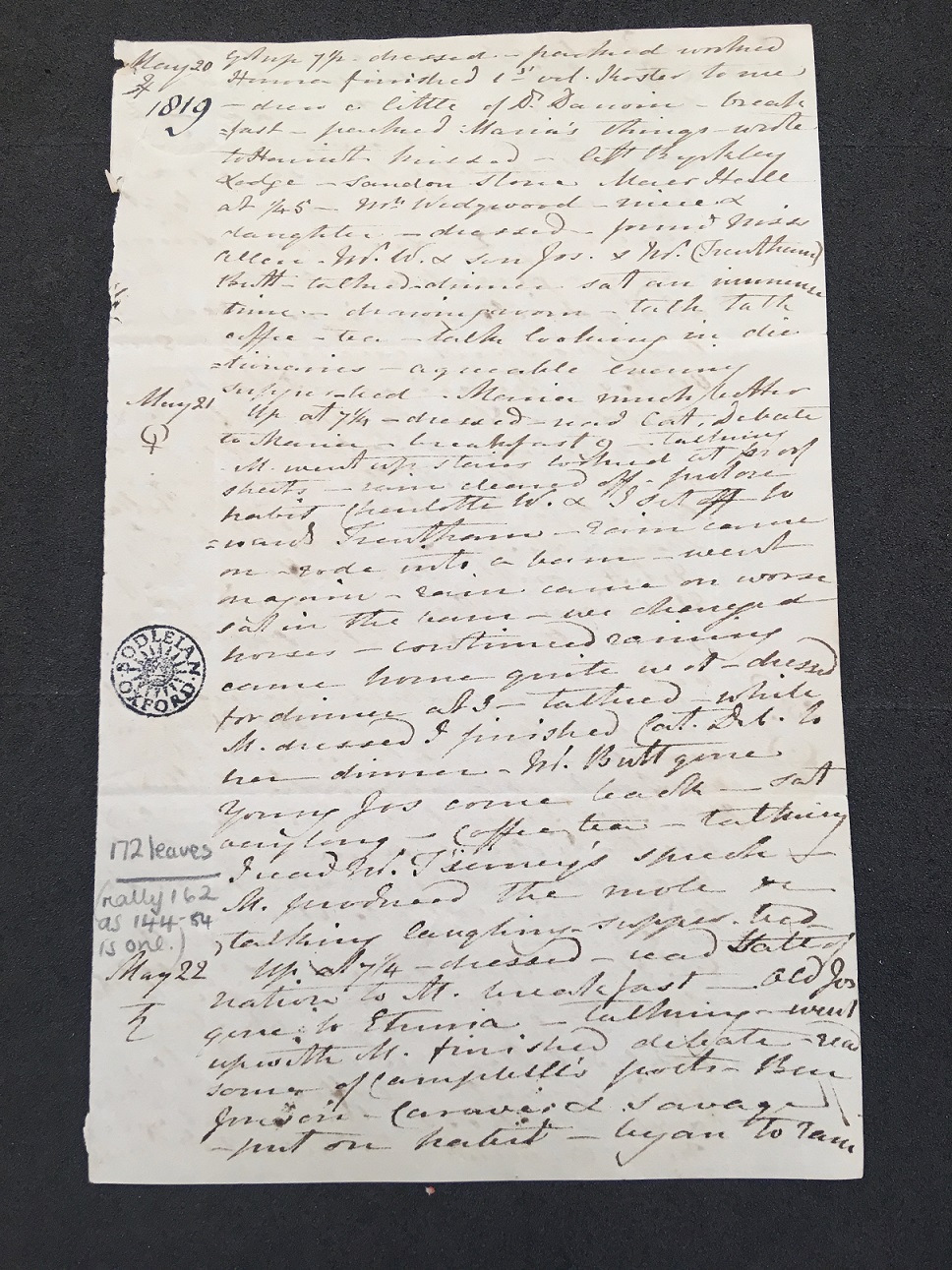 Fanny records their day-to-day activities (there is much talking, dressing, eating breakfast and dinner, drinking coffee and tea, writing letters to family), she details the weather, and appears to use symbols to record the stages of the moon. And there are hints of their reading and writing practices, which point to the lively family interest in matters beyond their domestic concerns. There are some tantalising, brief, references to their curiosity about political events (Fanny reads parliamentary debates most days) and to their social lives (they have a number of visitors and acquaintances).

Fanny’s journal gives us the opportunity to open up our blog to the writing of other members of the Edgeworth family. Fanny’s younger brother, Francis Beaufort Edgeworth (aged just 10 at the time) –who had travelled with Fanny in the company of their brother, Lovell, to England in January 1819 so that Francis could take up his place at Charterhouse school — wrote to Fanny shortly after he left them earlier in the month on 12 May 1819 . 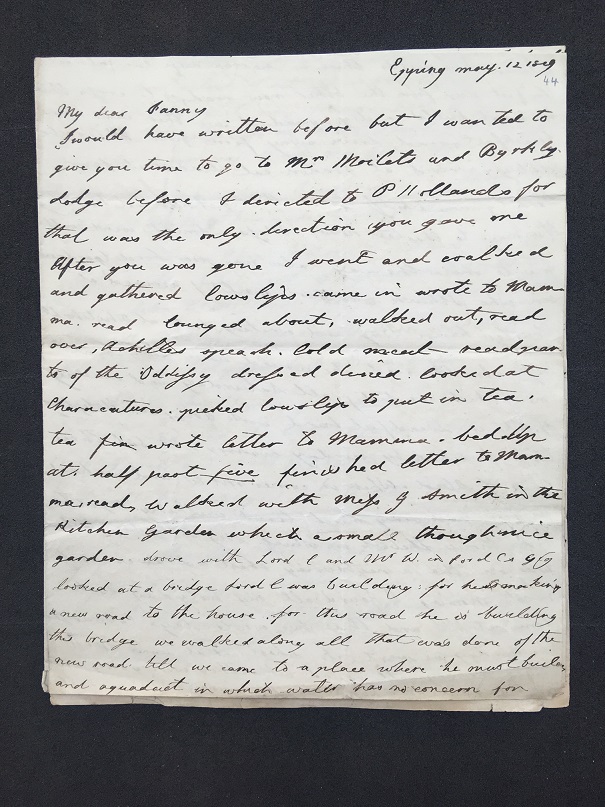 He lists his activities in his neat hand which is strikingly like that of Maria.

Francis and Fanny practiced what they were taught by Maria in line with the educational theory she and her father embraced: taking as much exercise and engaging with nature as they did improving reading: ‘I went and walked and gathered Cowslips, came in wrote to Mama. read lounged about, walked out, read over, Achilles speech’. Francis goes on to describe his journey back to school (Charterhouse) and then on to Epping to visit his maternal uncle and namesake Francis Beaufort.

There are examples of writing other than letters which demonstrate its importance in maintaining the strong bonds in this large family. Harriet Edgeworth (Maria’s sister), composed a poem in celebration of Maria’s forty-third birthday in 1821: 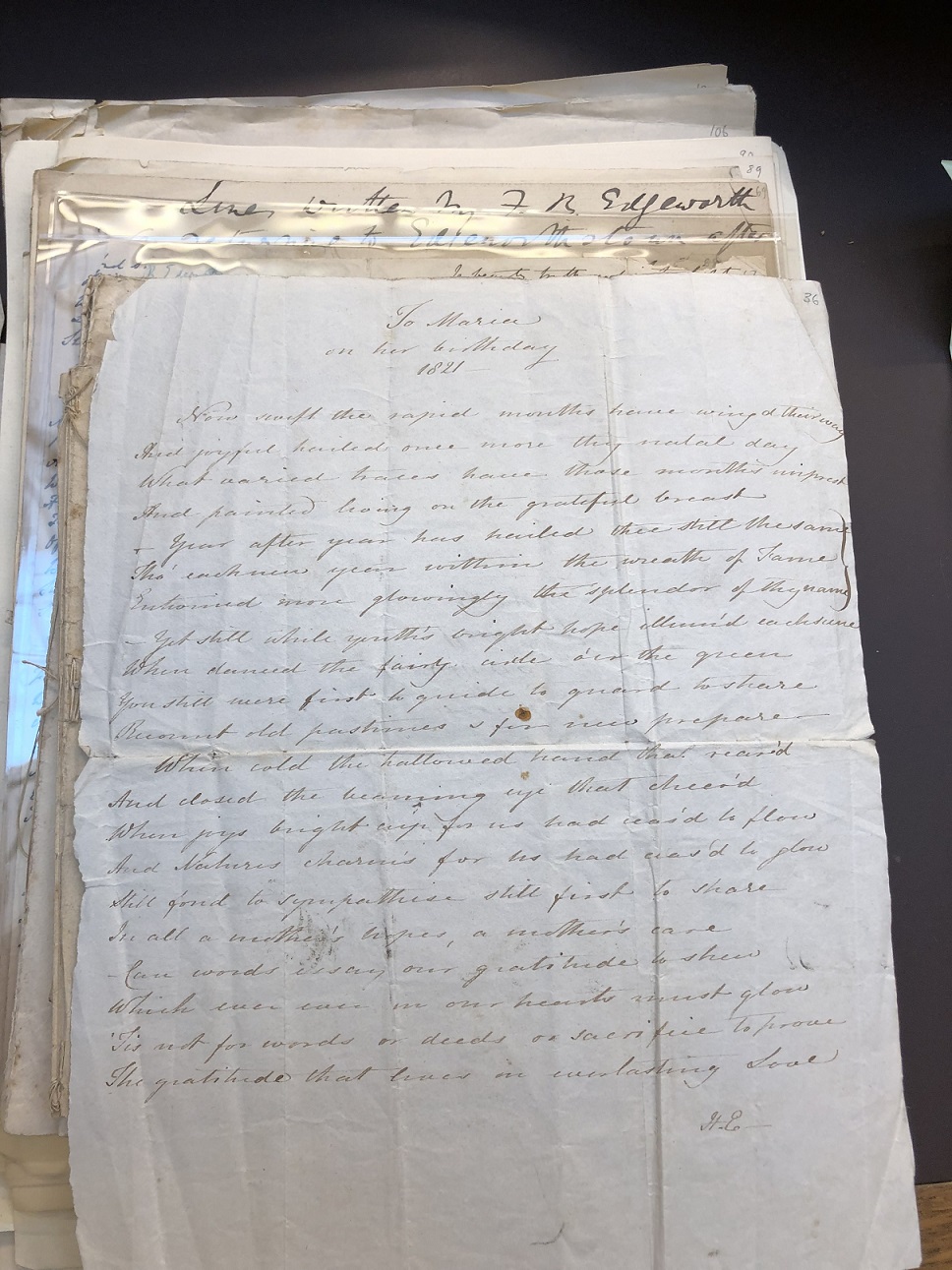 Yet still while youth’s bright hope illum’d each scene
When danced the fairy circle o’er the green
You still were first to guide to guard to share
Recount old pastimes & for new prepare. 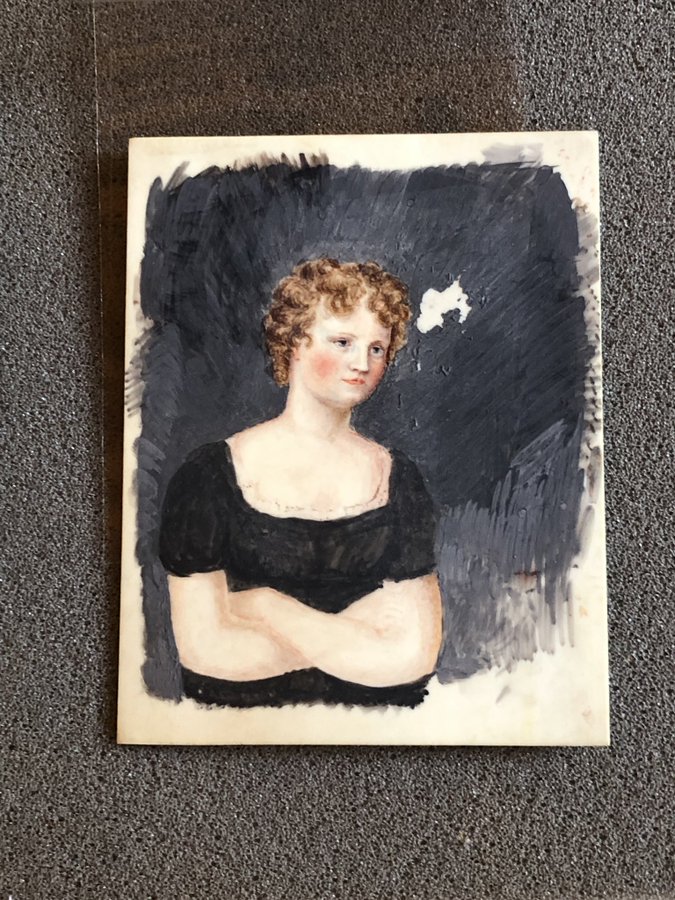 The poem celebrates Maria as a public figure with growing fame : ‘each new year within the wreath of Fame /Entwined more glowingly the splendour of thy name’. But equally to be celebrated and ever-growing are her virtues as a sister ‘You still were first to guide to guard to share / Recount old pastimes & for new prepare.’ Though none were so famous as Maria, the Edgeworth siblings were clearly engaged in literary composition of their own. If the miniature picture her mother, Frances, painted of her in 1819 is anything to go by, Harriet was as strongminded and independent as the half-sister she so much admired.

We will continue to open up our blog to more writings and drawings by members of the Edgeworth clan in the coming months. Keeping track of them all can be a tricky feat – we hope this list of Richard Lovell Edgeworth’s marriages and children helps: 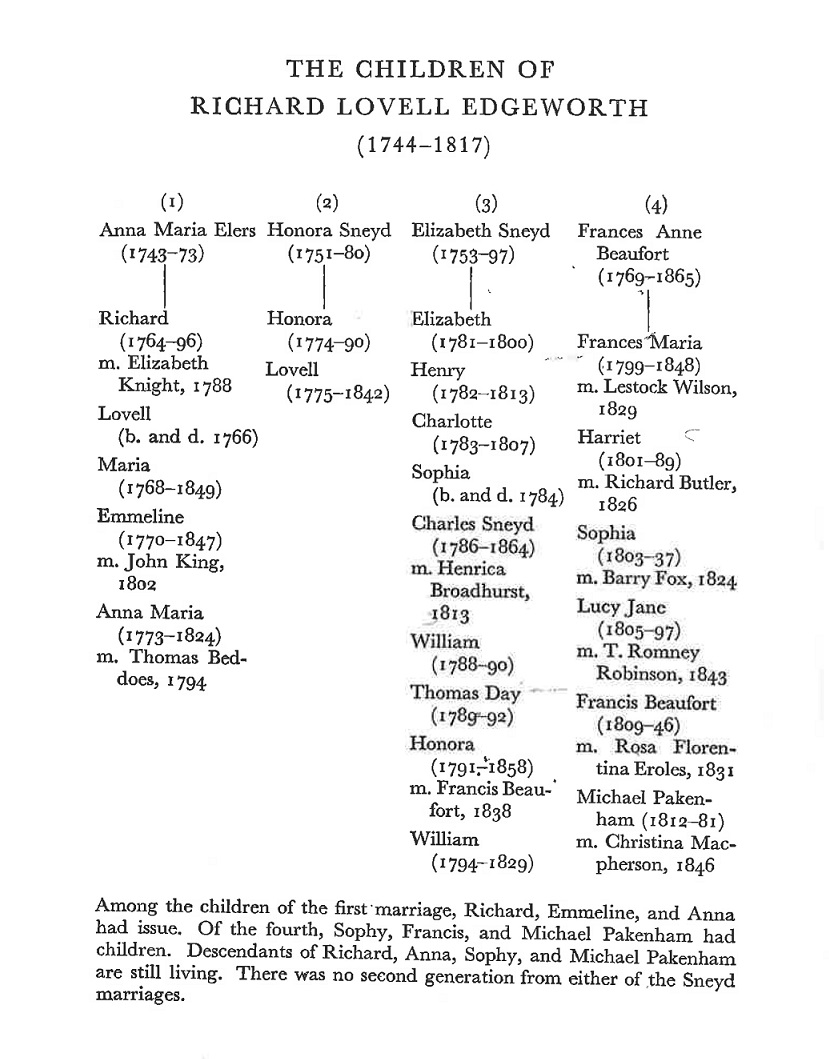 If you look at Maria’s dates, you will see that May was not only the month of Fanny’s journal and Francis’ letter in 1819, but it was also the date of Maria’s death. We publish our blog only a few days after the 170th anniversary of Maria’s death on 22 May 1849.

If you’ve been following us on Twitter, you will already know that our next blog will turn to the animal members of the Edgeworth extended family: if you want the dog blog – come back next month!