DVCAM is Sony’s enhancement of the DV format for the professional market. DVCAM uses the same encoding as DV, although it records ‘locked’ rather than ‘unlocked’ audio. It also differs from DV as it has a track width of 15 microns and a tape speed of 28.215 mm/sec to make it more robust. Any DV cassette can contain DVCAM format video, but some are sold with DVCAM branding on them.
Recognition
DVCAM labelled cassettes come in large (125.1 x 78 x 14.6 mm) or MiniDV (66 x 48 x 12.2mm) sizes. Tape width is ¼”. Large cassettes are used in editing and recording decks, while the smaller cassettes are used in camcorders. They are marked with the DVCAM logo, usually in the upper-right hand corner. 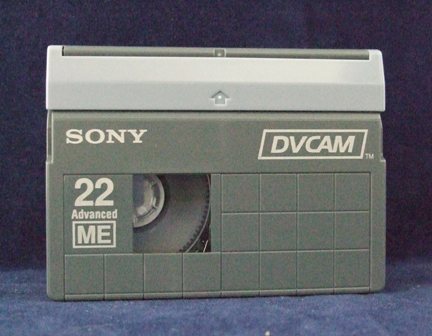 Unlike the other DV enhancements, HDV uses MPEG-2 compression rather than DV encoding. Any DV cassette can contain HDV format video, but some are sold with HDV branding on them.
There are two different types of HDV: HDV 720p (HD1, made by JVC) and HDV 1080 (HD2, made by Sony and Canon). HDV 1080 devices are not generally compatible with HDV 720p devices. The type of HDV used is not always identified on the cassette itself, as it depends on the camcorder used rather than the cassette.
Recognition
HDV is a tape only format which can be recorded on normal DV cassettes. Some MiniDV cassettes with lower dropout rates are indicated as being for HDV, either with text or the HDV logo. These are not essential for recording HDV video. 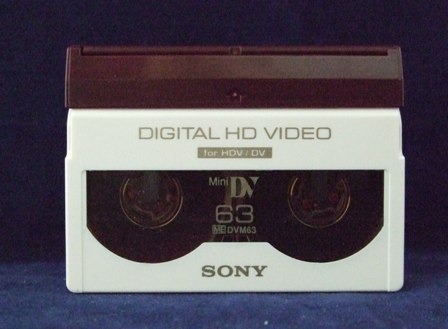