Oxfam produced a series of information leaflets in the 1990s titled ‘Oxfam and…’ which covered a wide range of topics such as Conflict, Poverty and the Environment, Trade and of course Health. They also focused on particular countries and project funds in areas that Oxfam was working in. In addition, leaflets were produced for primary age children on a similar range of subjects. The following are a sample of some of these ‘Health’ leaflets:

Following the donation of the Oxfam archive to the Bodleian Libraries in late 2012, sorting and cataloguing began in February. The work is being approached in three 18 month phases, with a tranche of the archive becoming available to researchers at the completion of each stage.  Our first selection of material will be accessible by June 2014, with the entire historic archive becoming available to researchers in June 2017.

Work on the first area of programme policy and management targetted has now been completed. This includes the minutes and papers of the Overseas Aid Committee, which began as the Grants Sub-committee in 1955, considering applications for funding; the Field Committees for Africa, Asia and other regions to which this responsibility was delegated between 1963 and 1992; and their successor, the ‘Single’ Overseas Committee. All set policy for the international programme, supported by bodies like the Medical Advisory Panel (from 1965).  The Panel was composed of senior staff and external experts and offered advice on aspects of policy, such as Oxfam’s attitude to and work on diseases like leprosy and tuberculosis, and on sensitive issues such as family planning.

Below is an early ‘note’ by the Panel laying out its thinking on objectives and criteria for assistance, with an emphasis on health education, arguing that ‘Hospitals and hospital services provide focal points not only for the treatment of disease, but also for its prevention, and for the training of personnel and popular education.’ The importance of the provision of clean water is also recognised. Water and sanitation were to become a particular Oxfam specialism in the following decades. 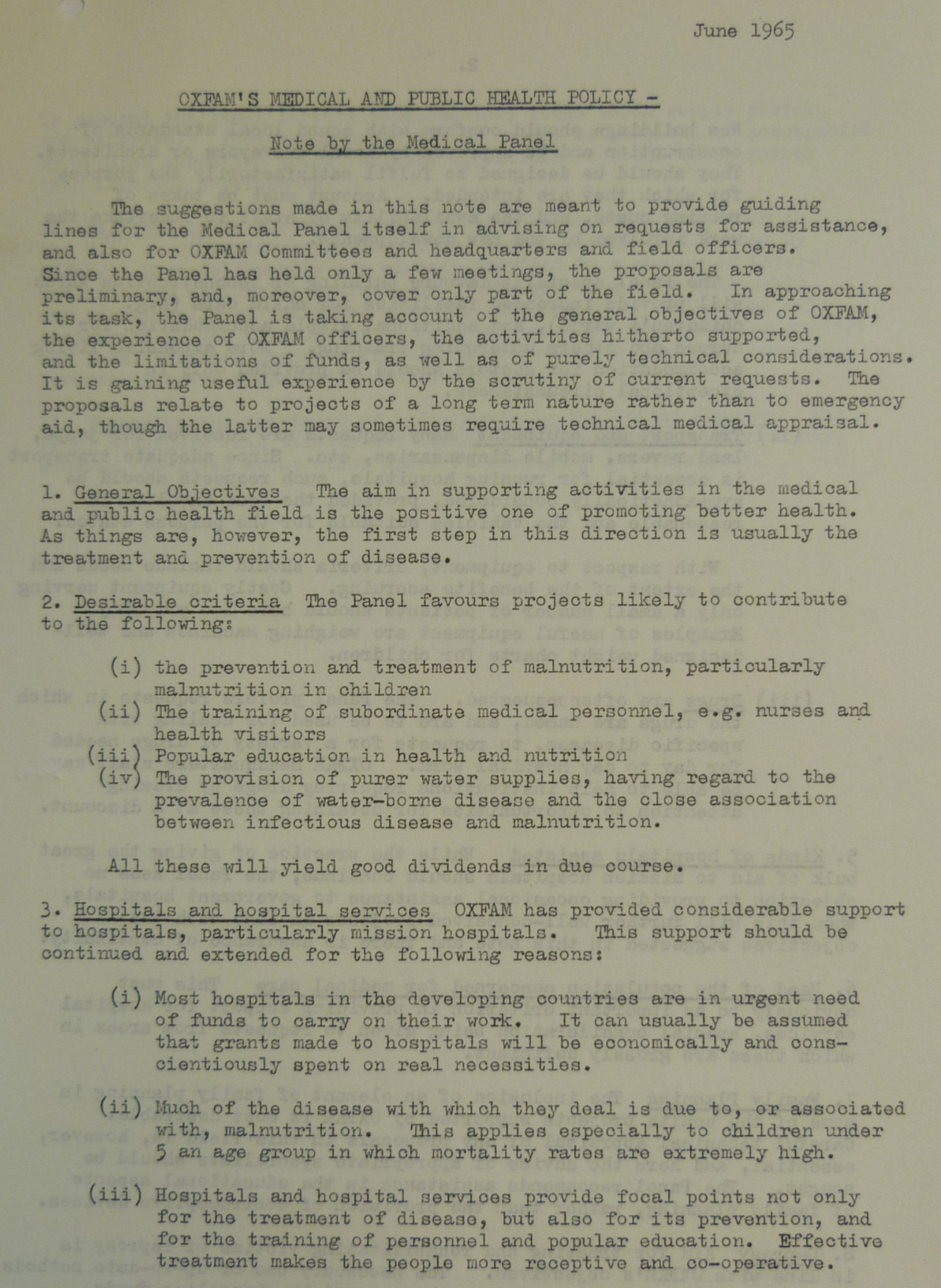 Records like these are part of a web of information for the researcher, where one could have as a starting point perhaps the published annual grants lists summarising each grant made to every country Oxfam worked in in a particular year, leading out to the decision-making level described above, and at the other, administrative extreme, to the ‘project’ or grant file containing correspondence with the recipient and reports on outcomes and impacts on communities of the use of the grant. All of these sources will form part of the final catalogue.