Even abbreviated to IIIF (triple-I-F), International Image Interoperability Framework doesn’t quite trip off the tongue, but this collaborative project does exactly what it says on the tin. The IIIF is an international community of libraries, museums and digital project groups who have for the past few years been working on a set of tools to make digital image collections much, much more accessible, interoperable, and user-friendly.

Representatives from the IIIF came to the Weston Library on Monday 15 June to talk about the project in general and the Bodleian’s IIIF efforts in particular.

Intro to the IIIF

The first speaker was Tom Cramer, Chief Technology Strategist at Stanford University Libraries, who spoke about the project’s principles and what the IIIF hopes to achieve.

Image collections, ranging from digitised medieval manuscripts to modern video, have been available online for many years now. These image libraries are a great resource for researchers, but they’re far from perfect. Held in individual silos and accessed with a wide range of viewer software, some of it years old, there can be huge inconsistencies in useability and quality between different collections. On top of that, there is no easy way to compare images held by different institutions, and often no easy way to cite, share or download images. The IIIF recognised that modern scholars need a better set of tools, tools with the potential to take digital scholarship in entirely new directions.

Essentially, what the IIIF aims to do is to present images from any institution in a standard way, via any compatible image server, to any user on the web. And all without the originating institution losing control of the source image. The project is well advanced, and a number of demonstrations of IIIF imaging serving are now available, including one from Stanford University and one from the Biblissima project. 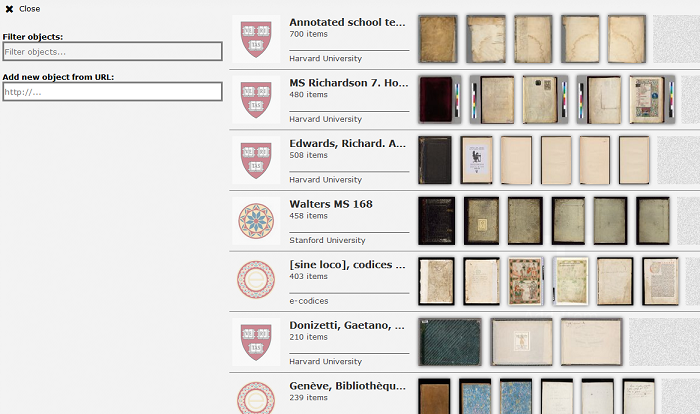 The Biblissima Project is a hub for digital humanities projects in France that is focused on the written cultural heritage of the Middle Ages and the Renaissance. They have an implementation of Mirador that currently shows content hosted at multiple institutions and will, increasingly, provide access to French content.

To make this work, the community has developed two shared APIs [an explanation of APIs]. The image API retrieves the images from wherever in the world they’re held and allows the user to select an area of the image and to resize, rotate, and change the colour quality. It also generates a static URL which allows scholars to cite the image, even an image at a particular level of zoom, in a stable, reliable way [an explanation of static URLs]. The presentation API packages each image with its metadata so that users know the originating institution, the title of the image, what page of what book the image was taken from, and so on.

Any interested institution will be able to apply these APIs to their data stores in order to make their own image collections fully interoperable and accessible. Meanwhile, external software developers have stepped in to build IIIF-compliant clients to display the images, including the Wellcome Lbrary’s Wellcome Player and the Internet Archive BookServer.

Just one benefit of this new image interoperability is that for the first time, it is possible to do things like virtually re-unite manuscripts and books which over time (and through carelessness or greed) have been broken up and dispersed across the world. But it also allows libraries, museums, archives, and the like, to offer rich image delivery and to publish an image just once in a way that allows for frequent re-use. Scholars will now be able to remix content from multiple sources, cite and share their content, and even do annotations and transcriptions more easily.

IIIF at the Bodleian

The Bodleian has been part of the project from the beginning. Matthew McGrattan, from the Bodleian’s Digital Library Systems and Services (BDLSS), and Judith Siefring, project manager for the Digital Manuscripts Toolkit, spoke about what the Library is doing with IIIF.

The Digital Manuscripts Toolkit (DMT) is a Bodleian effort to build tools to make it easier for other institutions, including smaller or less well-resourced institutions, to deploy their own IIIF-compliant image services. Part of the DMT project is to look at user needs and develop case studies to show some of the research possibilities opened up by the IIIF, which will also test the functionality of the Toolkit. To this end, four projects related to medieval manuscripts have just been selected for funding. The Apocalypse in Oxford is a digital comparison and editing project. Rolling History in 15th Century England will look at the practicalities of digitising scrolls (some 17ft long!). Rota Dominice Orationis will explore how to digitise wheel diagrams with revolving rings, or fold outs, or other unusual formats, and the Armenian Codicology & Palaeography project will create the very first palaeography teaching manual for the Armenian language.

Monday’s IIIF event was a thought-provoking and inspiring introduction to an exciting project, which opens up new opportunities for cataloguing, teaching, editing and long-term preservation, among many other possibilities. Your comments and ideas are welcome! Judith Siefring encouraged us to let her know our thoughts. You can get in touch at judith.siefring@bodleian.ox.ac.uk.