We recently received from Reading University a collection of materials relating to Oxford medicine from the archive of Hugh MacDonald Sinclair (1910-90), nutritionist.

In 1941 Sinclair created and led the Oxford Nutrition Survey, which reported to the Government on the effects of the wartime diet. Five years later this became the University Laboratory of Human Nutrition, of which Sinclair was director until 1955. He was Reader in Human Nutrition at Oxford from 1951 to 1958. From 1970 he was a visiting professor at Reading University. His archive is currently being catalogued at Reading, where the Hugh Sinclair Human Nutrition Group was set up in 1995 with the proceeds of Sinclair’s estate.

The material now at the Bodleian includes papers of Professor Kenneth Franklin, Dean of the Medical School 1934-46, and Assistant Director of the Nuffield Institute for Medical Research 1935-47. There is also correspondence of Sir John Scott Burdon Sanderson, Regius Professor of Medicine 1895-1904 (see our post of 1 June) and various other figures in Oxford Medicine, documents relating to the Oxford Medical School, photographs and ephemera. There are a number of photographs of Sanderson and he is easily recognised in caricature on the menu card for the Oxford University Annual Medical Dinner 1898: 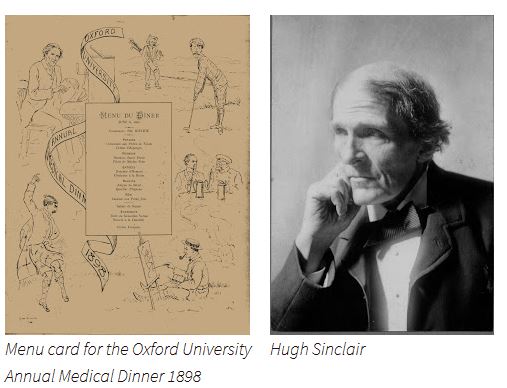 A final word on Hugh Sinclair. In 1979 he undertook an experiment to demonstrate the effects of essential fatty acids, restricting his diet to seal meat and fish only for 100 days. His bleeding time rose from three to fifty-seven minutes, supporting his long-held theory that certain essential fatty acids have an important role in inhibiting blood clotting, thus preventing thrombosis. A former colleague remembers joining Sinclair for dinner at Magdalen College high table, where he refused the meal and ate his piece of grilled seal. He commented that he enjoyed his diet, but when he pruned his roses his boots filled up with blood!

In his earlier career as an experimental pathologist, Sanderson had advanced the understanding of the causes of infectious disease and the acceptance of germ theory in Britain. As a physiologist, he had undertaken research for Charles Darwin on the movement of the leaf of the Venus flytrap. In 1882 he was elected Oxford’s first Waynflete Professor of Physiology (a position endowed by Magdalen College in honour of their 15th century founder, William Waynflete).  Sanderson was instrumental in creating the Faculty of Medicine in 1885 and in reducing the length of the Oxford medical degree from eight to seven years.