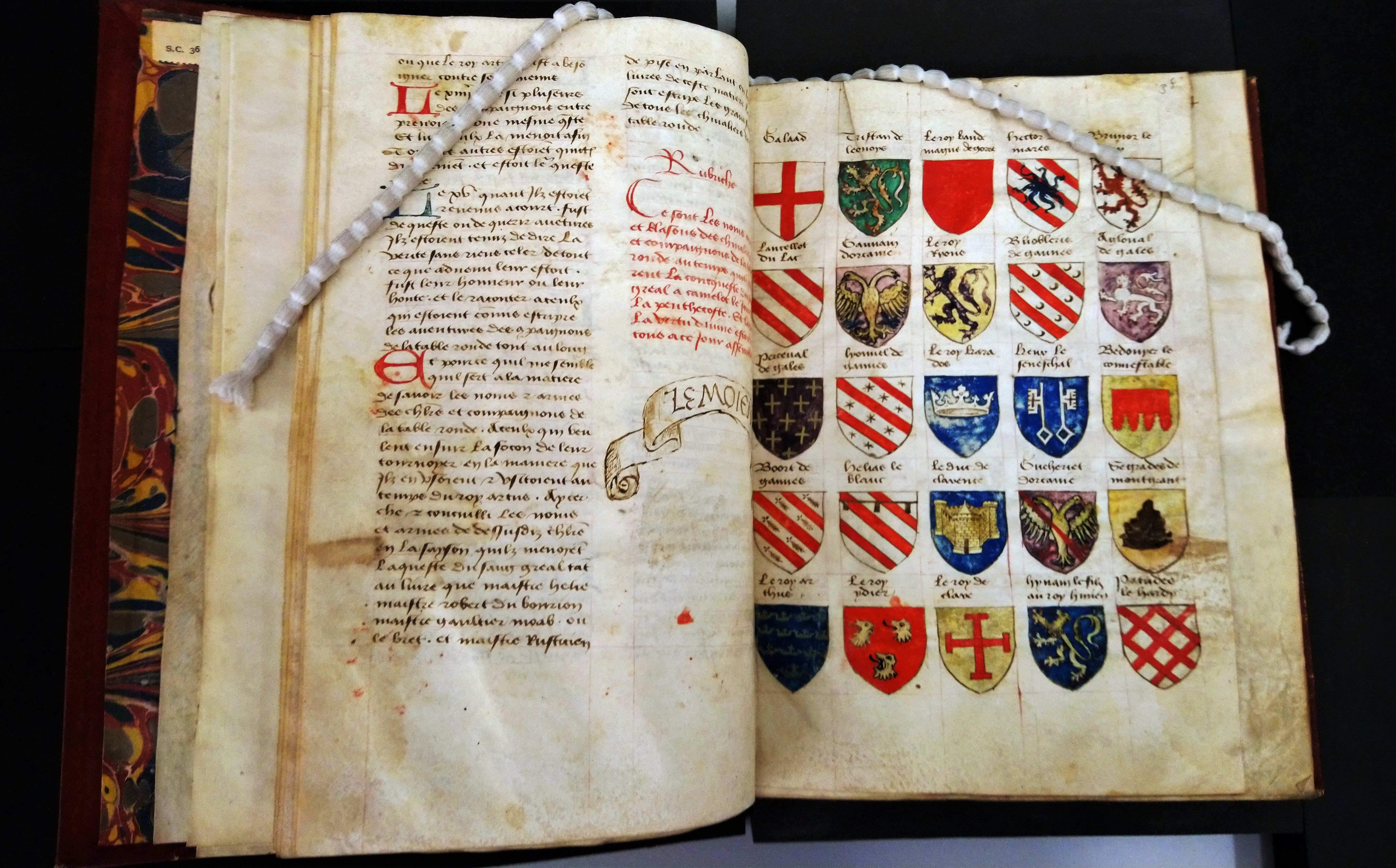 Another day, another interesting item found whilst completing the retro-conversion of the Summary Catalogue. As a confessed lover of medieval history, this item took me right back to my knighthood and chivalry university studies. What caught my eye was the seemingly historical material included in this beautifully illuminated manuscript. It all looks relatively straightforward: shields of arms from various kingdoms in Europe by the French herald Montjoie, written in the 16th century. Any questions? I have one. Included in this manuscript we have “shields of the knights of the Round Table” such as those of “Galaad, Perseual, and Lancelot du Lac.” With a slight change in spelling, the figures Galahad, Perceval, and Lancelot are largely considered to be mythical. They are understood to be created by Geoffrey of Monmouth in his pseudo-historical Historia Regum Britaniae (History of the Kings of Britain c. 1136-1137) and later in the 12th century by Chrétien de Troyes in his Arthurian Romances.[1] So what are they doing here? 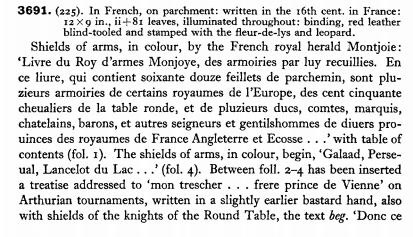 Line 1-6: “‘Book of the herald Montjoie,  containing shields of arms collected by him. In this book, which is made up of 72 leaves of parchment, there are various coats of arms of  some kingdoms in Europe, of the 150 knights of the Round Table, and those of  several dukes, counts, marquis, chatelains [someone who owns a castle], barons and other lords and gentlemen of  miscellaneous provinces of the kingdoms of France, England and Scotland…”
Line 9: “A treatise addressed to ‘my very dear … brother prince of Vienna'”
Line 11-12: “So, all good mores stem from virtue”
Line 13: “The means/way/method”

Whether this manuscript is fully fictional or not is a topic for discussion probably longer than a light-hearted blog post, and requiring a lot more knowledge of coats of arms than I possess. This interesting element does however warrant me to discuss the legends of King Arthur and the Knights of the Round Table, as well as delve into heraldry and the beautiful illustrations by Montjoie.

A French royal herald named Montjoie wrote and illuminated this book in the 16th century. We don’t know much about him, though another French herald of the same name was supposedly present during the Battle of Agincourt in 1415.[2] They could be the same person with the wrong date on this manuscript, Montjoie could be the name given to French royal heralds, or it could have been a popular choice. Other than this, we have no information about the herald apart from the obvious: being literate and adept at illustration. The level of detail given to each of these colour shields suggests someone with a lot of time and a lot of respect for the knights who displayed and fought with these coats of arms. Heralds were initially messengers used by kings, queens and the nobility, and they were also required to organise and oversee tournaments.[3] They would have spent a lot of time with knights and the heraldry that accompanied them, both at these tournaments, and also overseeing battles such as Agincourt. In this instance, the French and English heralds watched the battle from atop a hill and came to a decision about the victorious army – the decision was respected, showing just how much the heralds were also. 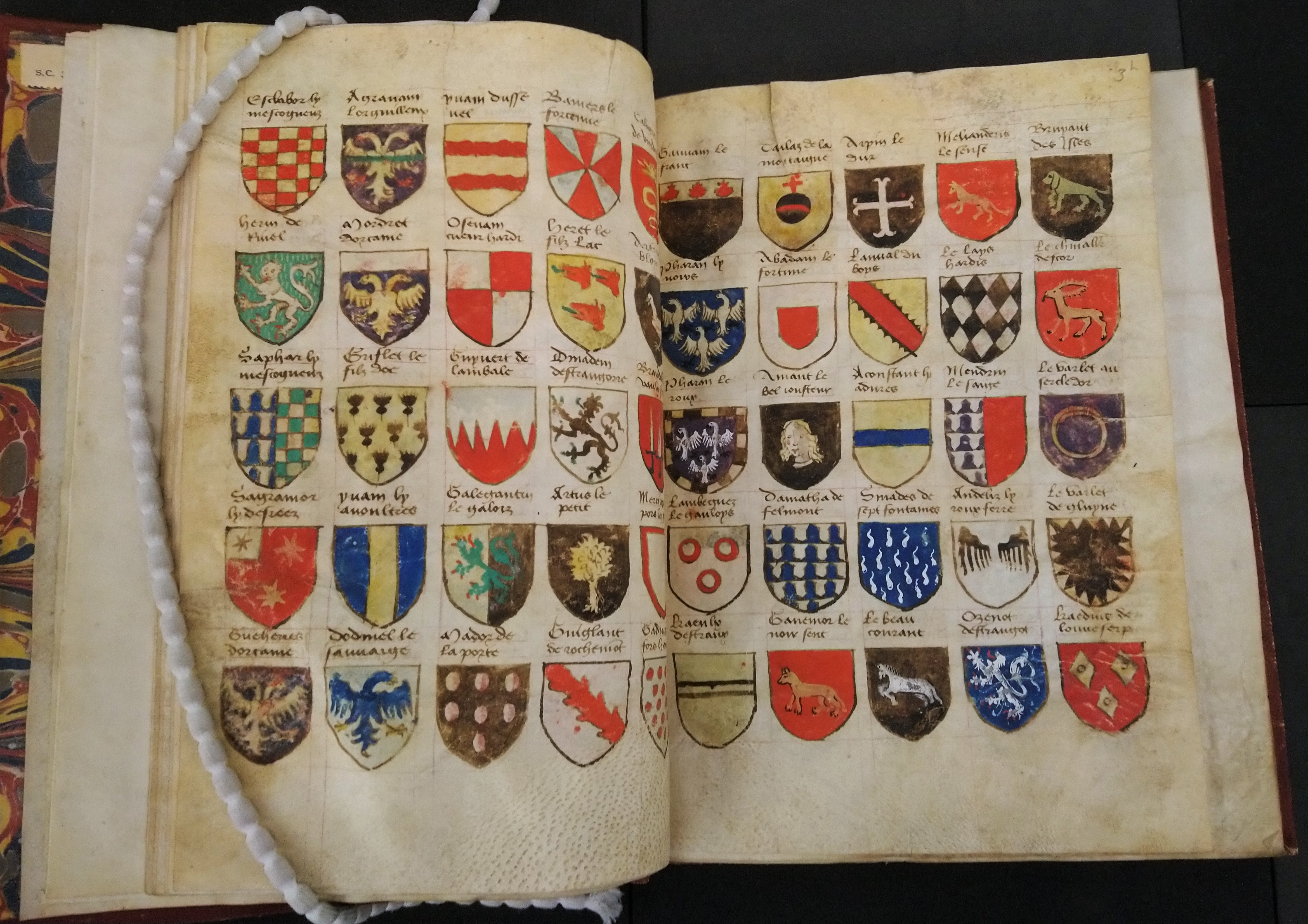 Clark described coats of arms as beginning in combat, with the need to distinguish chiefs and commanders as well as “point out those under their command” i.e. a bit like how different football teams usefully wear different colours, and captains wear armbands. According to Fearne, quoted in Clark, “the first soueraigne that ever gave coate of armes to his soldiers was King Alexander the Great, who, after the manner of his ancestors, desirous to exalt by some speicall meanes of honor his stoutest captaines and soldiers above the rest, to provoke them to incounter their enimies with manly courage, and by the advice of Aristotle, he gives unto the most valiant of his armies certain signes or emblemes, to be painted upon their armours, banners, and pennons, as tokens for their service in his wars”.[4] Coats of arms are heraldic visual designs on a shield and actually came into general use in European nobility around the 12th century. Who could bear and use arms changed from country to country, but they were personal and in England and Scotland were bestowed on individuals rather than families. They were legal property and were passed from father to son from the end of the 12th century on the order of King Richard I, strictly regulated by heralds.[5] The rules of coats of arms are very detailed, using figures such as lions for courage is only the beginning. For a fuller look into this distinct science, see H. Clark An introduction to heraldry.[6] Every line, figure, shape, and colour has meaning, and each worked to distinguish one knight from another. 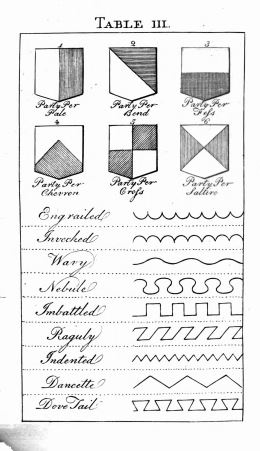 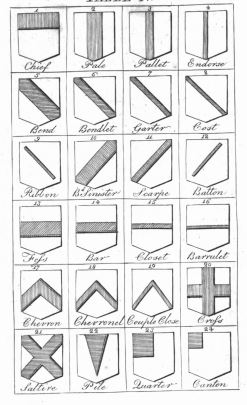 King Arthur and the Knights of the Round Table

In medieval Europe, knighthood went from a mounted warrior, to a class of lower nobility, to a rank associated with “the ideals of chivalry, a code of conduct for the perfectly courtly Christian warrior.”[7] These shields of arms played a large role here, as the knights (largely on horseback) entered tournaments, justings, tiltings and other “honourable exercises” to “gain reputation in feats of arms”.[8] These arms identified the knights, as well as the nobility they may have been vassals for, and allowed them to show off and also gain skills they may need in actual battle. The knights would arrive and heralds would check their armorial bearings, proof of nobility and register them. These tournaments first began in Germany in the tenth century and became general practice in Europe shortly afterwards.[9] The tournaments are regarded largely in relation to the world of Arthurian romances, principally by French author Chrétien de Troyes in the 12th century, and bring visions of A Knight’s Tale to all who have seen the (brilliant) film adapted loosely from Chaucer’s Canterbury Tales.[10]

Getting back to the manuscript, Montjoie here has assigned some of the Knights of the Roundtable that we recognise from these romantic tales shields of arms. It’s fun to imagine Lancelot with the diagonally red striped shield and Galahad the starkly English red cross, but unfortunately these figures are largely accepted to be mythical legends rather than real life chivalric figures. The same is to be said for King Arthur, who became this romantic figure through Geoffrey of Monmouth’s centring of him in his pseudo-history mentioned above. It is largely accepted amongst historians that there is “no solid evidence for his historical existence” despite being credited with defeating the Saxons in the 5th and 6th centuries, though Arthur’s legend well and truly lives on.[11] It was Geoffrey who wrote about Merlin, Guinevere, Excalibur, and Arthur’s final resting place at Avalon, and Chrétian who added Lancelot and the Holy Grail, focusing on various Knights of the Round Table as well as the King.[12] Nicholas Higham discussed in his 2018 article how “Arthur has been pressed into service time and again to support any number of causes” and he even inspired a dish in the Great British Menu this year.[13] That such tales were so prevalent in society that Montjoie wanted to illustrate the shields of arms for these characters, and they are still prevalent today is very humbling. Perhaps all we want is a strong legend to believe in and an Arthurian romance. Whilst we will never truly know if King Arthur or any of the Knights of the Round Table existed (until time machines are invented), we can enjoy Montjoie’s book nonetheless. 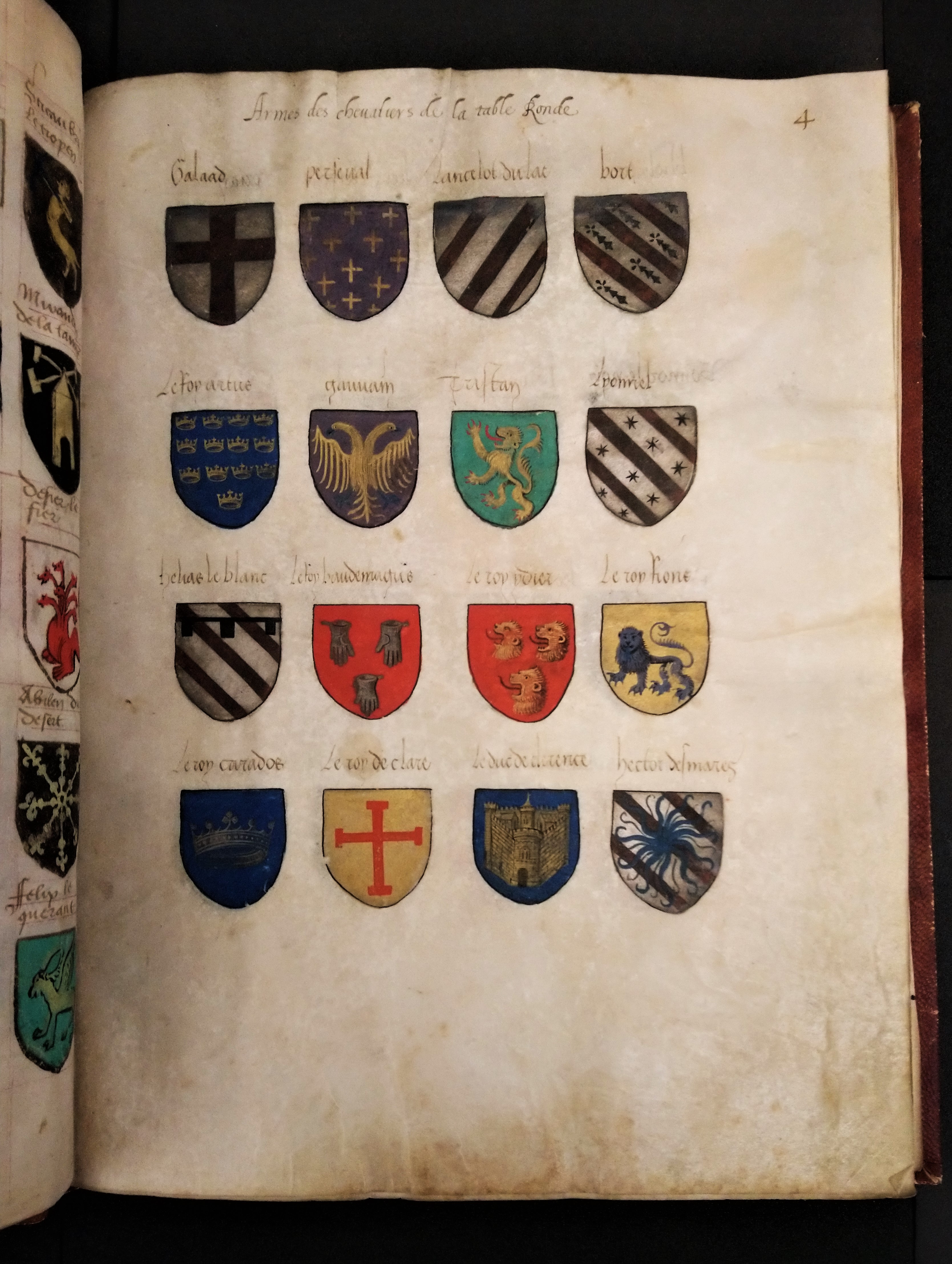 [6] H. Clark, An introduction to heraldry.