“The vales, the streams, the meadows, hamlets of Cotswold stone—they make a pretty picture for your second family home. But they hide away a story of labour, toil and skill of the children, men and women in the Cotswold textile mills.”
Andy Danford, “The Ballad of Bliss Tweed Mill”.[1]

With nearly 56,000 references, the Summary Catalogue of Western Manuscripts showcases the wide diversity of archival material held by the Bodleian libraries, and that is one of my favourite aspects of working on this project. Today, I have chosen to explore yet another side of the catalogue: local history. When I worked on the retroconversion of MS. Top. Oxon. c. 523, I was quite fascinated to learn that this particular box held papers relating to a strike that happened in 1913-1914 in an Oxfordshire factory. My knowledge of British labour history was mainly focused on Northern regions and on earlier decades, so I was curious to check out the manuscript. It starts with a note written by the historian Sir George Norman Clark, who compiled the papers.

MS. Top. Oxon. c. 523 contains the story of the strike that took place between December 1913 and June 1914 at Bliss Tweed Mill in Chipping Norton, about 20 miles North of Oxford. If today the factory building has been converted into residential apartments, at the time of the strike it was buzzing with around 400 workers. About two thirds of these workers (237) took part in the strike, amongst whom a slight majority of women (125).

The Bliss family had been active in the cloth sector in the Chipping Norton area since the middle of the eighteenth century when they upgraded their site to a large-scale fully steam-powered factory in the nineteenth century. By 1870, according to Mike Richardson, Bliss mill employed up to 700 people.[2] This growth is the evidence of the prosperity of the business the Bliss family had established. They specialised in tweed, one of the trading strengths of the region since the middle ages.

However, in 1872, a fire caught and destroyed part of the mill, along with three human casualties. The factory had to be rebuilt and the owner, William Bliss, had to borrow a large sum of money from the bank. This, along with a decrease in product sales, plunged the company into recession.

In 1896, the Bliss family left Chipping Norton, and a man called Arthur Dunstan was appointed as managing director. A few chosen lyrics from Andy Danford’s “Ballad of Bliss Tweed Mill” show how the employees felt towards the man: “Some called this man a tyrant …, some called the providence to send him to his grave.”[3]

What led to the strike?

The strike at Chipping Norton was decided for local reasons, but happened in the midst of a larger national period of unrest. Strikes flourished in the years 1910-1914, so much so that the journalist and historian George Dangerfield called the era “the workers’ rebellion”.[4]

At Bliss Tweed Mill in November 1913, Arthur Dunstan discouraged his employees from joining the local branch of the Workers Union, threatening them with the loss of their jobs should they choose to syndicate. Bliss Tweed Mills workers had indeed many reasons to join the union: Dunstan’s style of management was harsh, as the lyrics quoted above show; he was hated by his employees for keeping wages low and working conditions poor. In his 2008 article, Mike Richardson states that over 230 workers joined the union regardless of their boss’ threats.[5]

In December 1913, three employees, who were very active union members, were sacked. Their co-workers tried to negotiate with the hierarchy to get them reinstated, but negotiations failed and as a result, on 18 December 1913, 237 workers stopped their work. Their strike would last six months. 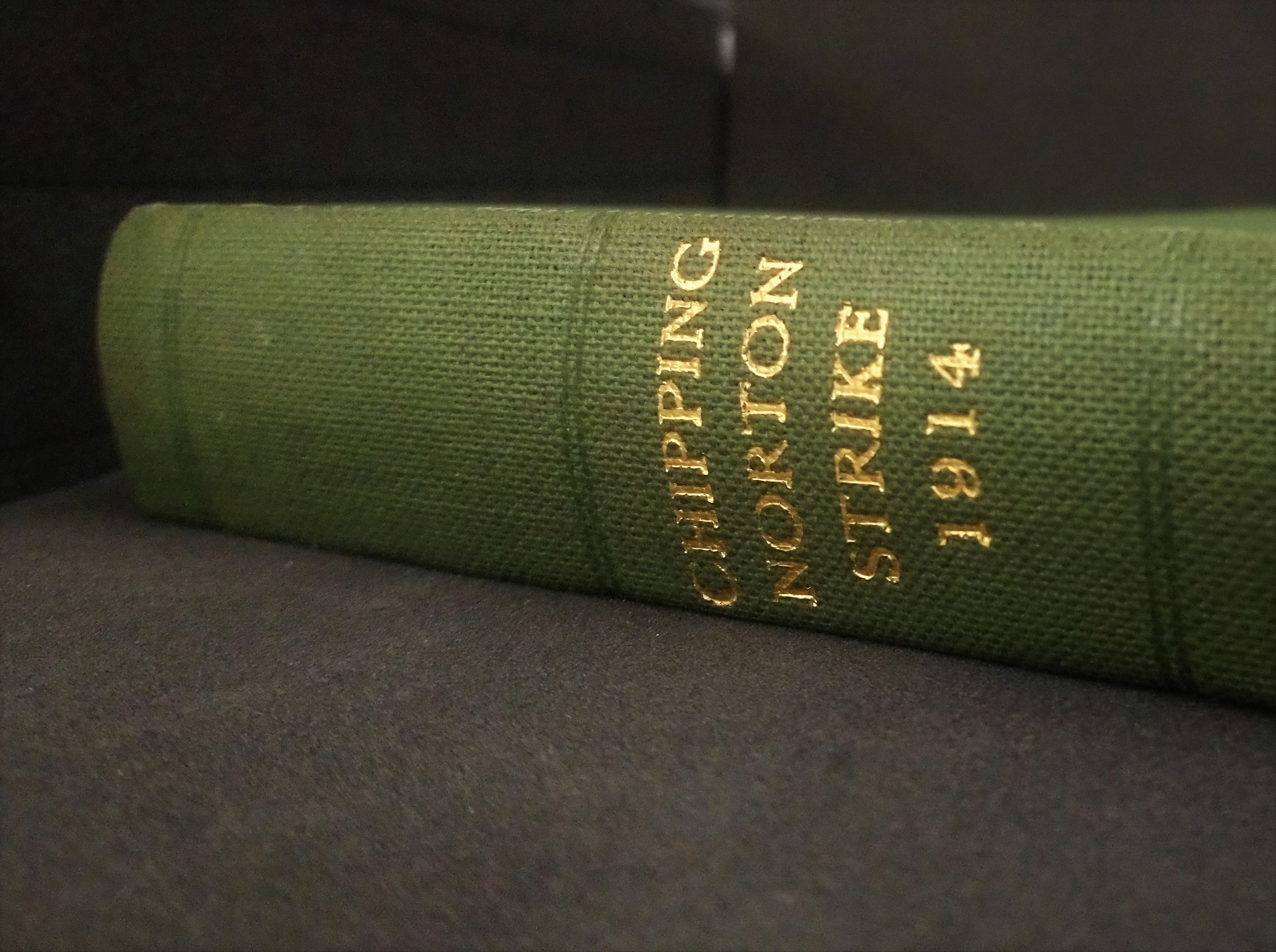 Many documents were produced during the time of the strike at Bliss Tweed Mill. Some emanated from the workers, others from the outside, like newspaper reports. George Clarke collected all he could find, and they now form MS. Top. Oxon. c. 523. These papers tell the story of what happened in the Chipping Norton mill in 1913 and 1914 better than this blog post ever could.

Lists of the workers containing their names, marital status, job titles and wages; communications from the mill’s management or from the strike committee; cuttings… 135 items, both printed and manuscript now form MS. Top. Oxon. c. 523. 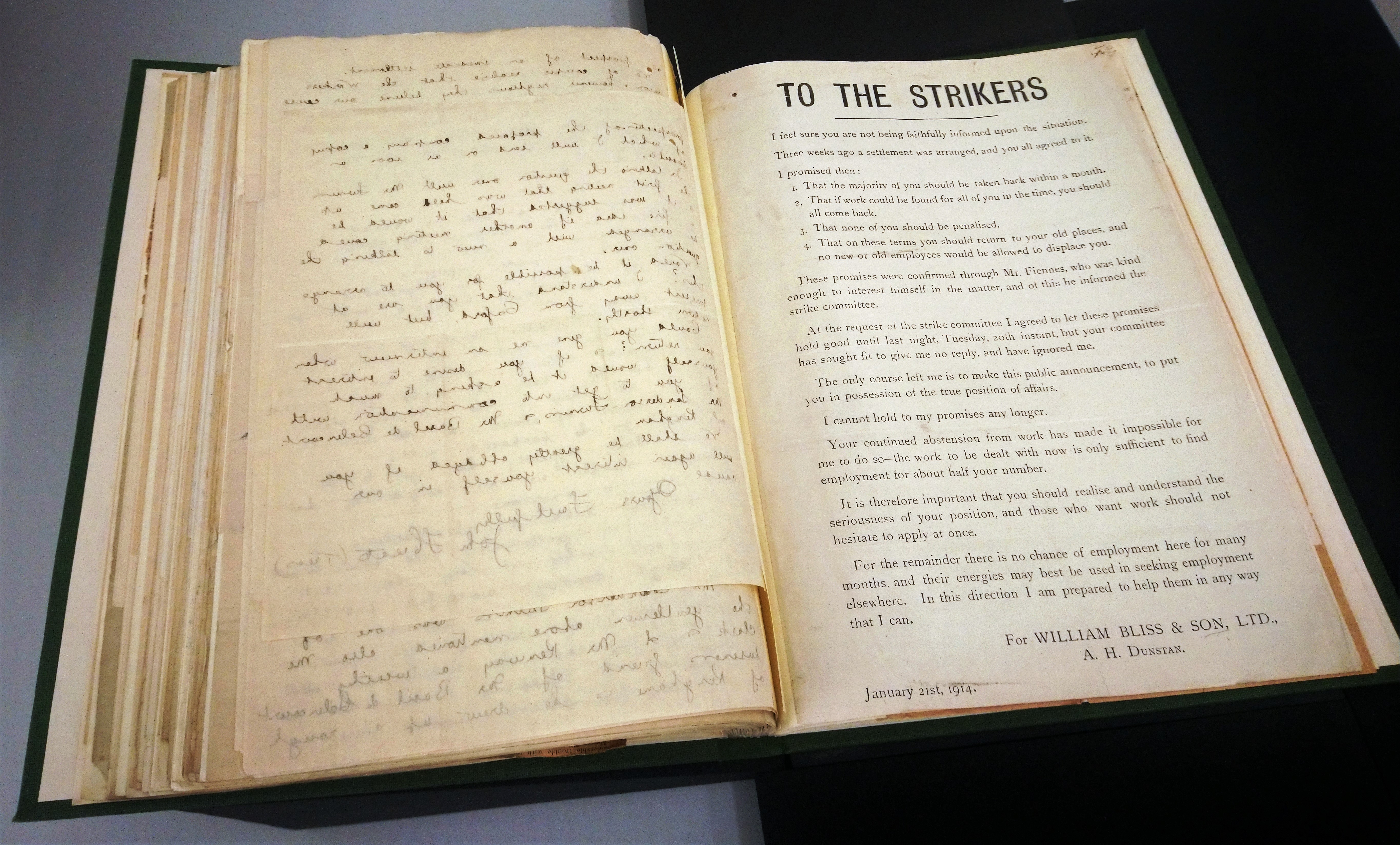 [1] “The Ballad of Bliss Tweed Mill”, written and performed by Andy Danford, 2014, https://www.brh.org.uk/site/articles/ballad-bliss-tweed-mill/ (accessed May 2020)