Conservative Research Department (CRD) briefings on the poll tax, the Gulf War, and the UK’s entry into the Exchange Rate Mechanism (ERM), plans and correspondence surrounding publicity of the poll tax, preparations for local elections and by-elections, and think tank research notes on a range of important topical issues, are among newly-available Conservative Party Archive files released by the Bodleian under the thirty-year-rule.

As in previous years, many of our new releases are drawn from our collections of CRD files, including policy briefings prepared for Members of Parliament, opposition monitoring files, publicity for the poll tax, and preparations for local and by-elections. This year we will also be releasing research notes from the Progress Trust think tank, available to consult for the first time, as well as correspondence, papers and meeting notes from Conservatives in the European Parliament and the Women’s Organisation of the Conservative Party.

This blog post will briefly examine some of the highlights included in the newly-released files, illustrating their value for researchers of the Conservative Party and historians of British political history.

This year’s releases under the thirty-year rule include a wide range of policy briefings prepared by the Research Department. These briefings, generally prepared for Conservative MPs and Peers ahead of parliamentary debates, provide an important insight into the Party’s thinking and their strategy when dealing with key issues of the day. Notable subjects covered by the briefings being released this year include the poll tax, the short-lived entrance of the UK into the ERM, and the Gulf War. Among these briefings are also those written by David Cameron as Head of the Political Section of the CRD from 1989 to 1992 (see file CRD/B/23/10 for his Political Information briefs, including handwritten annotations). 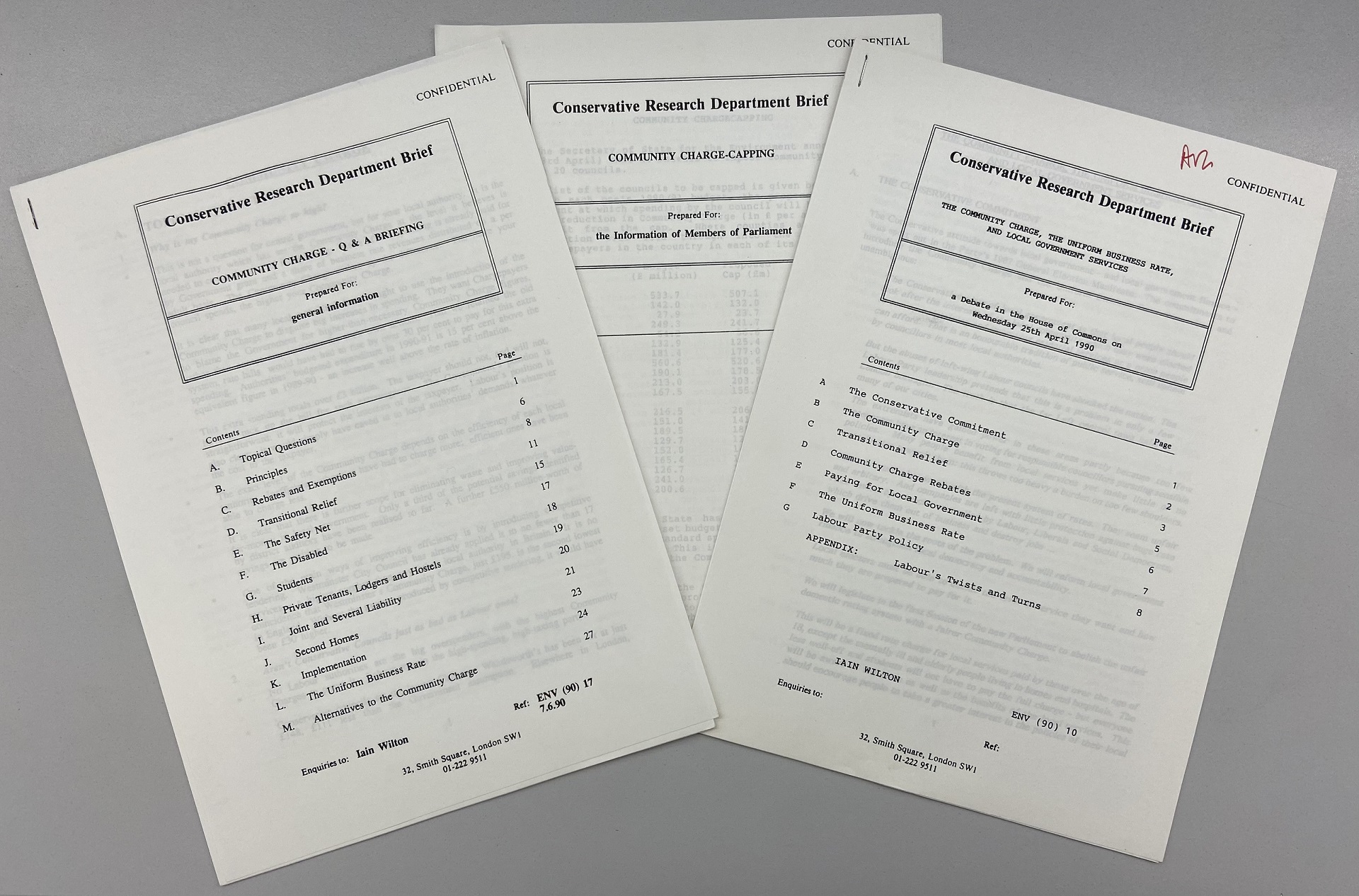 A selection of CRD briefings from the Environment file, covering the Community Charge, including answers to topical questions, explanations of the safety net, rebates and transitional relief, and criticisms of Labour policy – CPA CRD/B/11/9.

Other topics included in the briefs from 1990 include the economy, environment, education, foreign and home affairs, and transport, all valuable resources for those studying specific or general aspects of the Thatcher era. 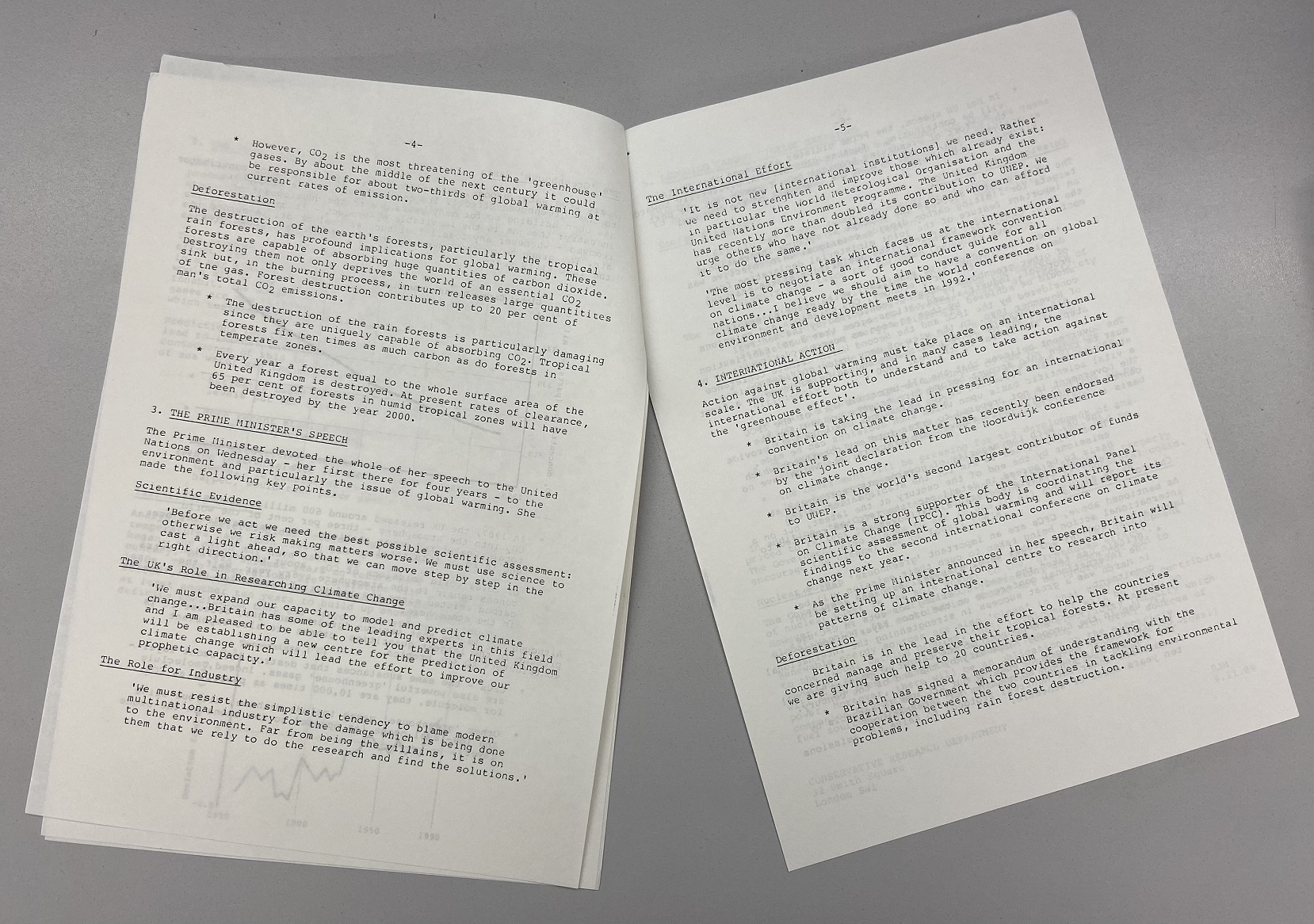 CRD briefing from the Environment file entitled ‘Global Warming and World Climate Change’, including quotes from a speech made by Margaret Thatcher to the United Nations – CPA CRD/B/11/9.

The introduction and fall-out from the widely criticised Community Charge (commonly known as the ‘poll tax’) dominated the late Thatcher years, and as a result this year’s de-restrictions contain many files discussing it, providing a fascinating insight into how the Party responded to criticisms and tried to combat the negative electoral impact of the new tax. These files include not only the comprehensive briefings mentioned above, but also Research Department preparation for advertising and party-political broadcasts to promote and provide more information on the poll tax. File CPA CRD 5/10/3 includes various drafts of a proposed local government advertising campaign which was tested using research groups, in the form of propositions with supporting facts. The image below shows an annotated copy of a plan for this campaign, giving historians of this era a useful insight into how the Party viewed misinformation as a key factor in the discontent surrounding the tax, and the methods they used to try and tackle this. 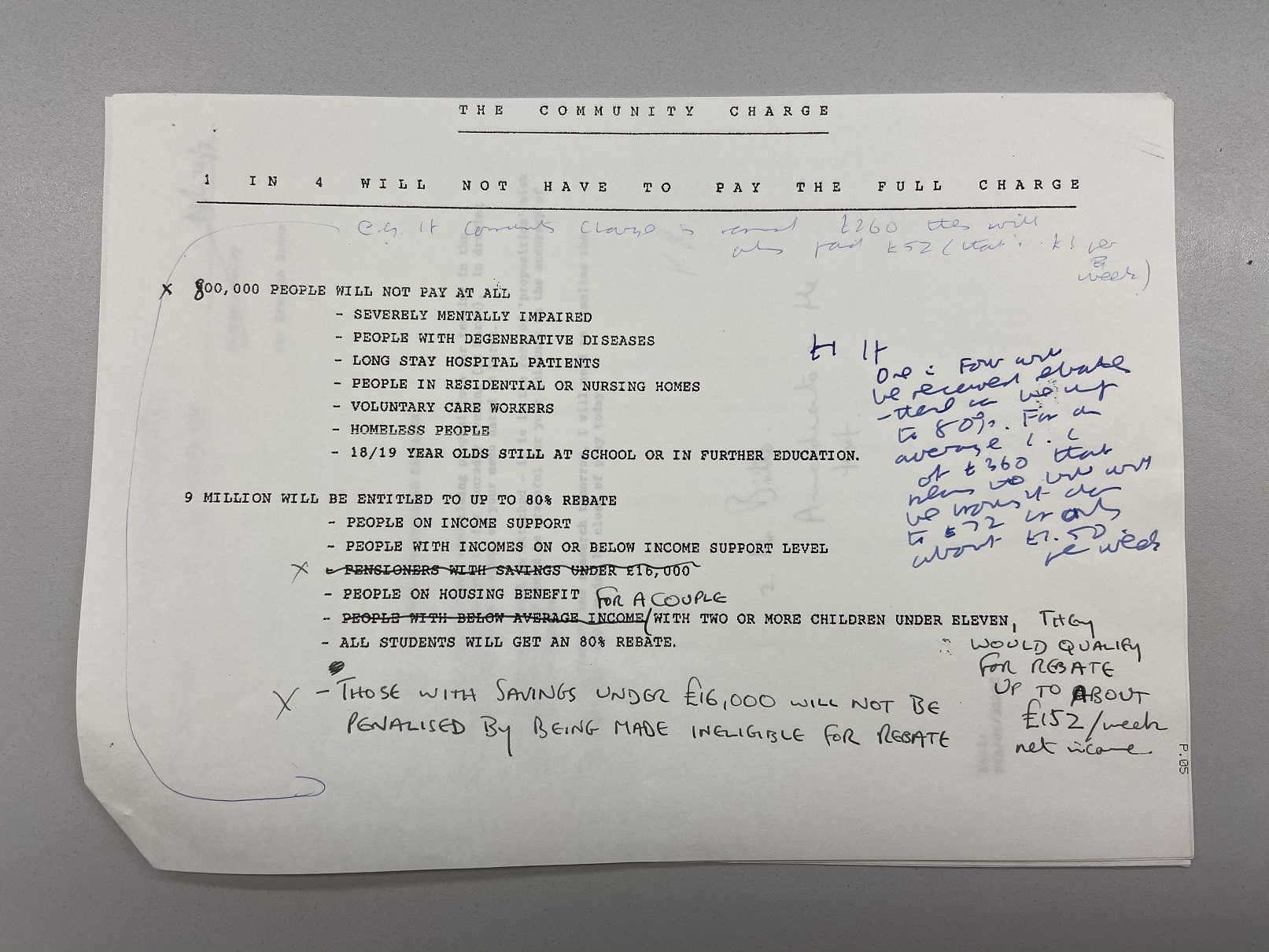 Also among newly-available files highlighting the poll tax as a high priority issue during local election campaigning, file CPA CRD 5/17/2/4 comprises drafts of a script for the Local Government Party Political Broadcast on 2 May 1990. The script involves a husband and wife dispelling numerous misconceptions about the poll tax, for instance the husband saying “I thought the whole idea was everybody pays the same” and his wife explaining “That everybody who can pay, pays something, yes. But not all the same. I mean students like young Tom get 80% off their poll tax”.

A particularly strong area in this year’s releases are Research Department files on local elections and by-elections in 1990. These files include large briefing packs for local elections, briefings and papers for by-elections, and various correspondence. Such files would be particularly useful for any historians of the specific locations of these by-elections, including Bradford North, Bootle, and Eastbourne, as well as anyone studying the policies of the Thatcher era in general.

Further, the image below demonstrates how these files can give an interesting insight into how the Party prepared for elections in Labour strongholds. 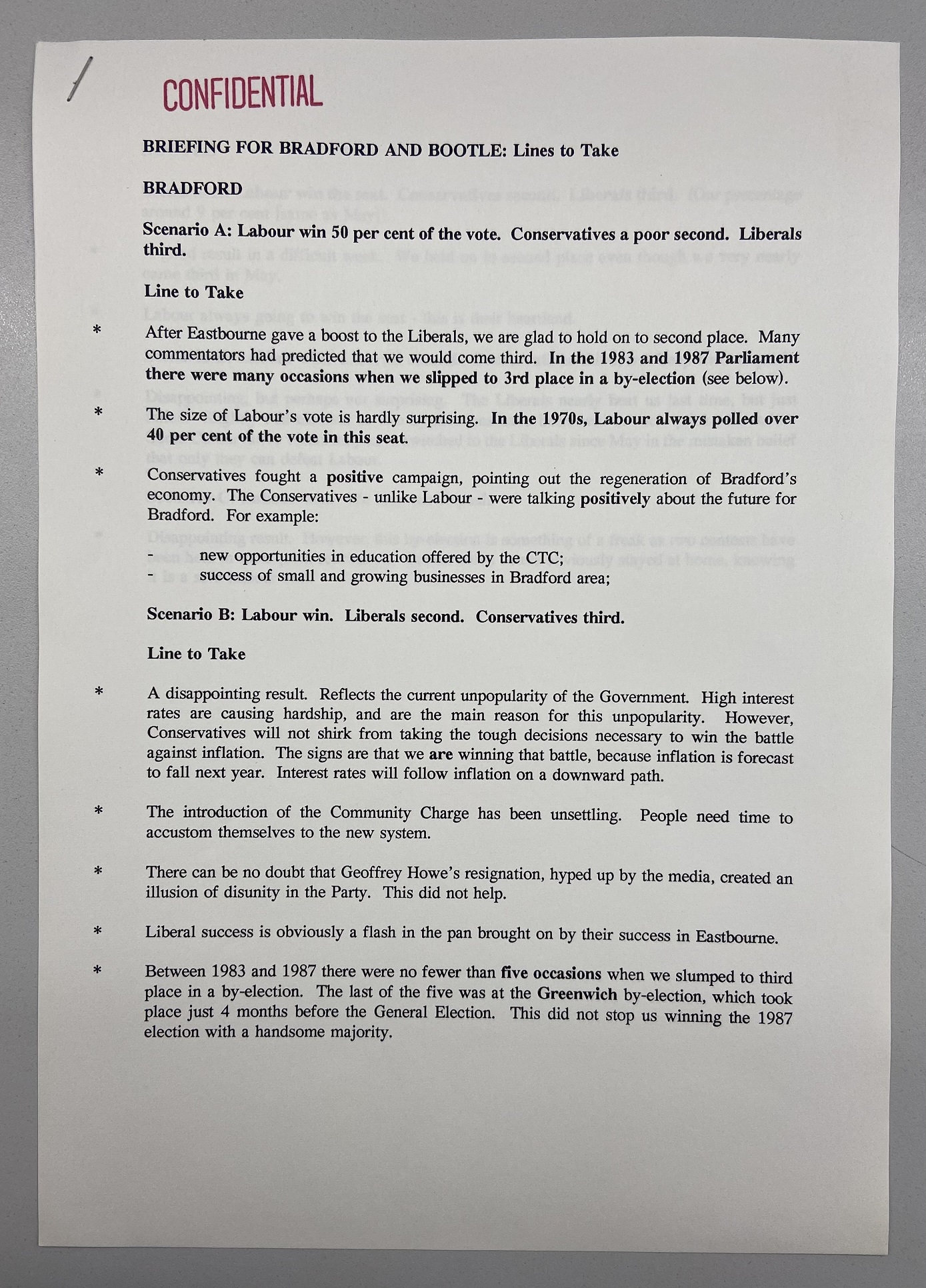 A further highlight of the releases this year are the Ebury research notes produced by the Progress Trust think tank. These research notes should prove to be a highly useful resource for historians of the period, with a vast range of topics covered.

The images below give an insight into the types of topics covered by these notes. With the House of Commons being first broadcast to the public in November 1989, the research note on the right gives suggestions as to how MPs should and shouldn’t behave, concluding “In short, forget the traditions of the House of Commons; forget that it used to be your place of work. It is now a place where you are on show. Bad luck.” This file (CPA CTT/PT/4/6/1) also includes notes on a whole host of further topics, such as the poll tax (with research notes on the reasons for unpopularity, possible remedies, and ideas for reforming the poll tax), the popularity of Thatcher, the environment, education, and the economy. 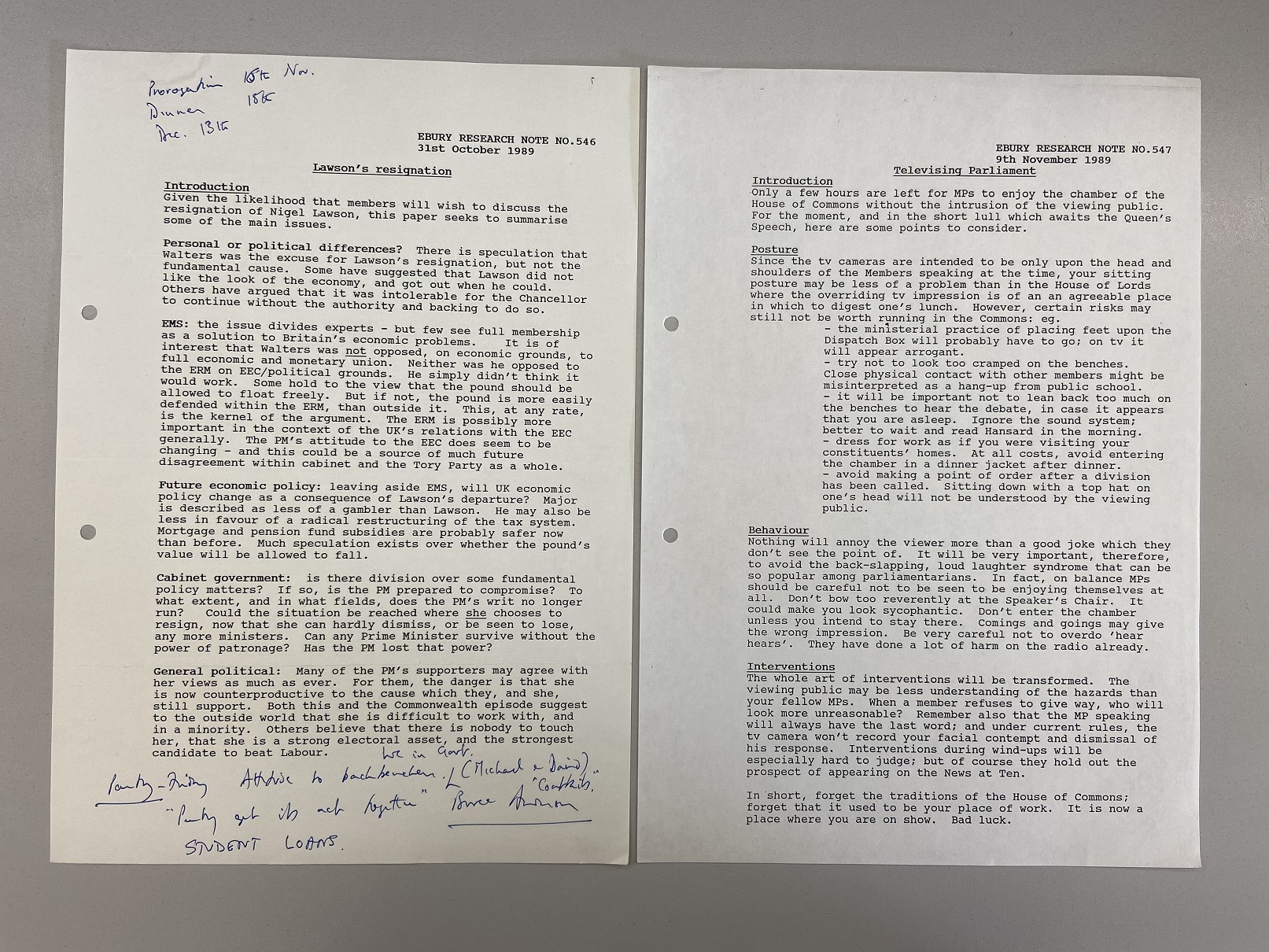 These notes also comprise interesting information on relations with Europe, another highly contentious issue of the day. The images below show a research note on the issue of Britain’s membership of, and relationship with, the European Economic Community (EEC), a useful source for anyone studying the history of Britain’s, and the Party’s, relationship with Europe. 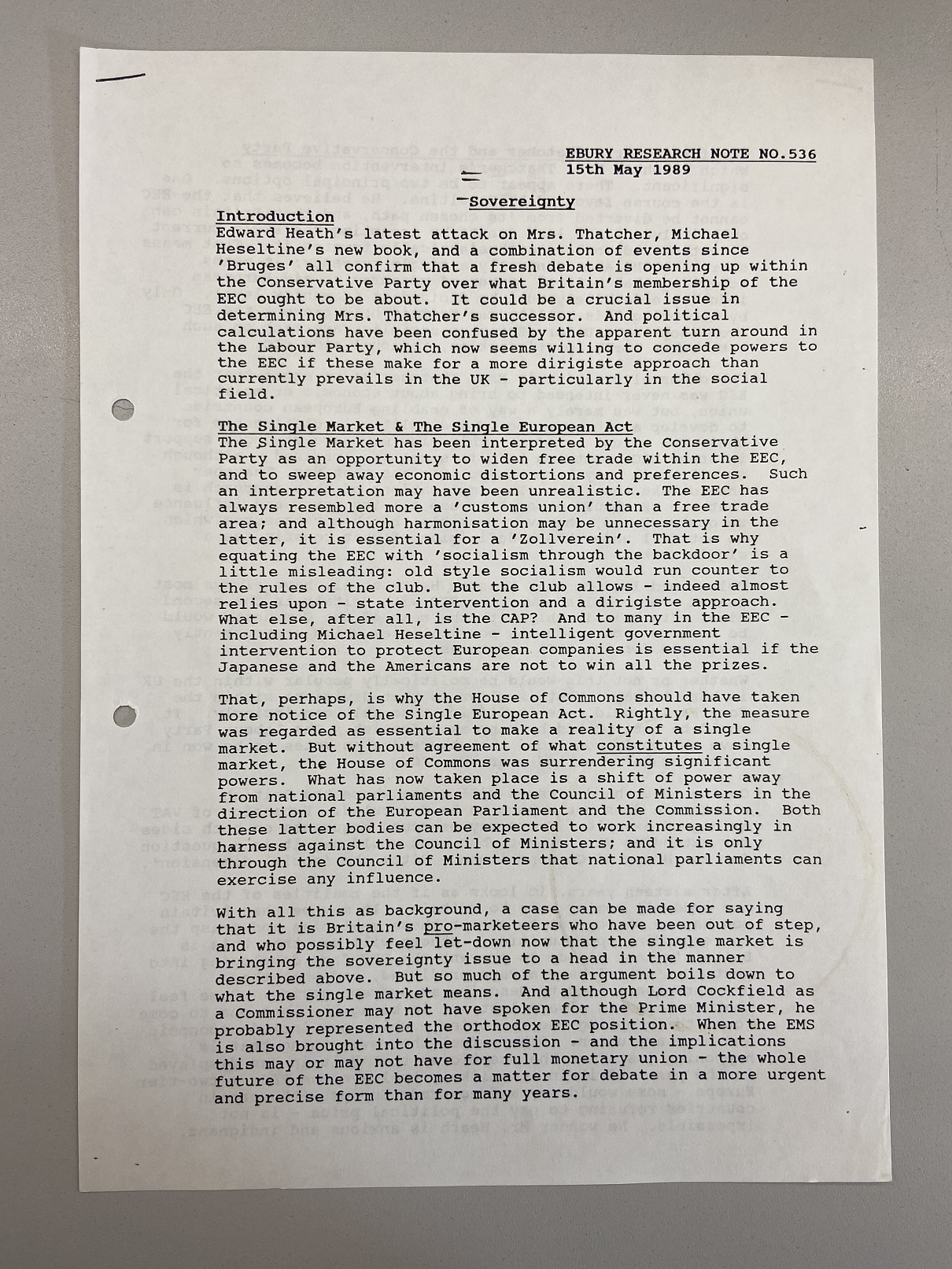 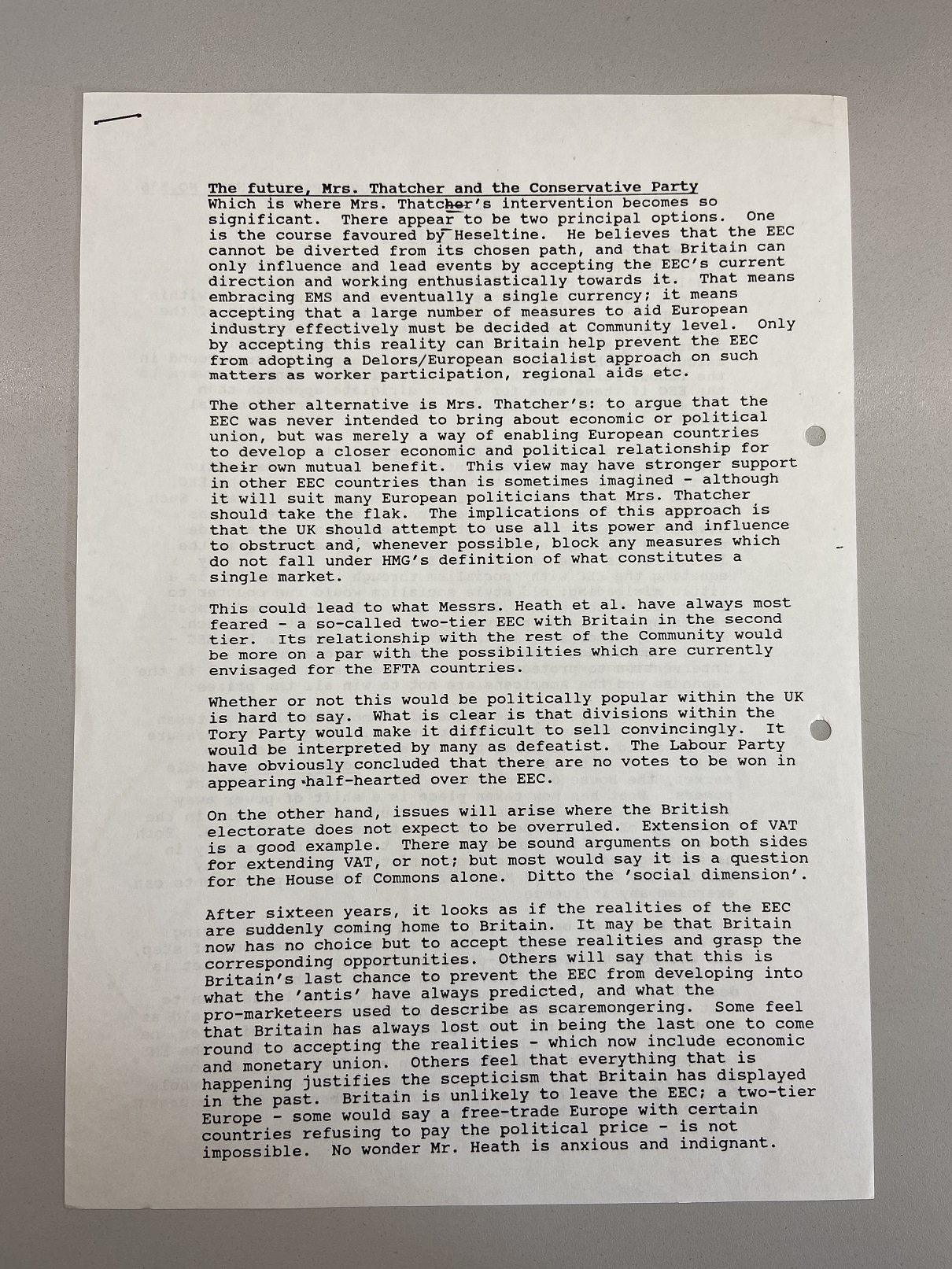 All the material featured in this blog post will be made available from 1 Jan 2021. The full list of de-restricted items will be published shortly on the CPA website, where past de-restriction lists from previous years are also available.