The Bodleian Libraries held two successful Frankenstein Revisited study days for KS4 and KS5 pupils from local schools in November 2019, building upon the success of three study days originally held in 2018 as part of the bicentenary celebrations of the publication of Frankenstein. Due to popular demand, a further study day was held in January 2020, but in a slightly different format. The study days were funded by the Helen Hamlyn Trust and, in total, 163 students from seven local state schools attended. The format of the days was designed to be varied and tie in with the curriculum for English Literature.

The November study days included two half-hour university style lectures (for the KS5 pupils) and a contemporary theatrical performance (‘The Two-Body Problem’ by Louis Rogers, performed by Martha Skye Murphy) followed by three ‘hands-on’ sessions when the students were split into smaller groups: one with live demonstrations of historical artefacts at the History of Science Museum, one looking at original Shelley-Godwin family manuscripts at the Weston Library, and one textual editing session focussing on the original manuscript of Frankenstein. 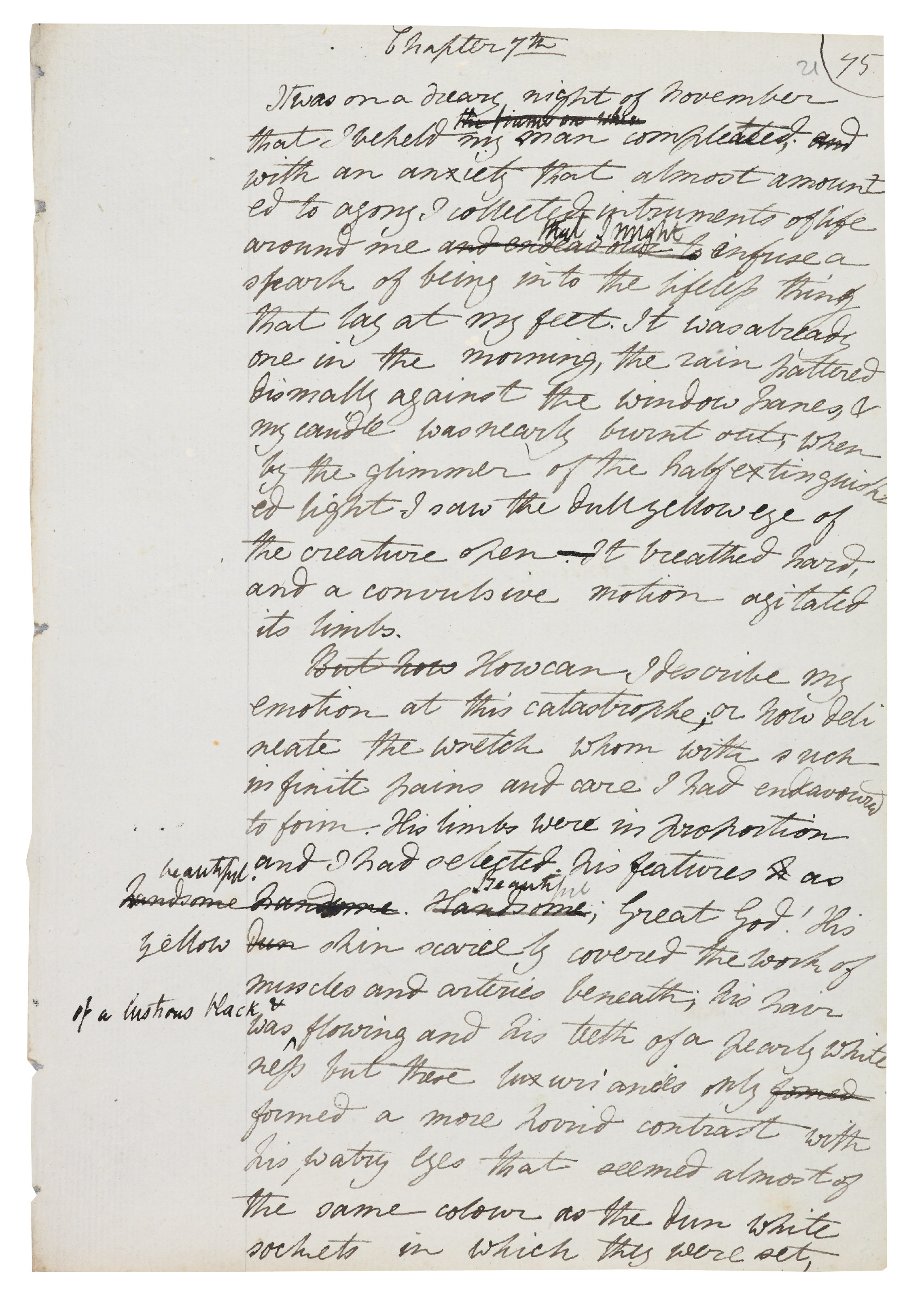 I led the half-hour sessions with the original family manuscripts to small groups of students: though this meant running the same session several times back to back, the students all got the opportunity to get close-up to the manuscripts. Once the groups had settled down, I began a roughly chronological journey through the manuscripts charting the life of Mary Shelley: beginning with the last notes from her mother Mary Wollstonecraft to her father William Godwin on the day of her birth, through to the journals chronicling her elopement with Percy Bysshe Shelley and the death of their first child, the manuscript of Frankenstein and finishing with Percy Shelley’s ‘drowned’ notebook.

I tried to get the groups to think about the nature of a manuscript and what they thought were the major differences between a copy of the printed text and the manuscript written by Mary Shelley. I also raised the question of manuscript survival and the memorial nature of many of the items, reverently kept in turn by surviving members of the family. Percy Shelley’s water-damaged notebook also raised questions of the physicality of items: the groups were generally able to surmise what had caused the damage to the notebook and some of the older pupils were able to second-guess before I explained that it was on board Percy’s boat when he died.

Overall, the sessions were successful and we received lots of positive feedback from the students including: ‘Fascinating to see Mary Shelley’s more personal thoughts and the original, unedited tale’. The students wrote that the sessions made them ‘feel more engaged to the text’ and found it ‘amazing to be close to the story so physically’. Perhaps most importantly, it was ‘surreal and completely different to school’.

A longer version of this blog post was originally published on the Archives for Learning and Education Section of the Archives and Records Association’s blog on 10th April 2020.