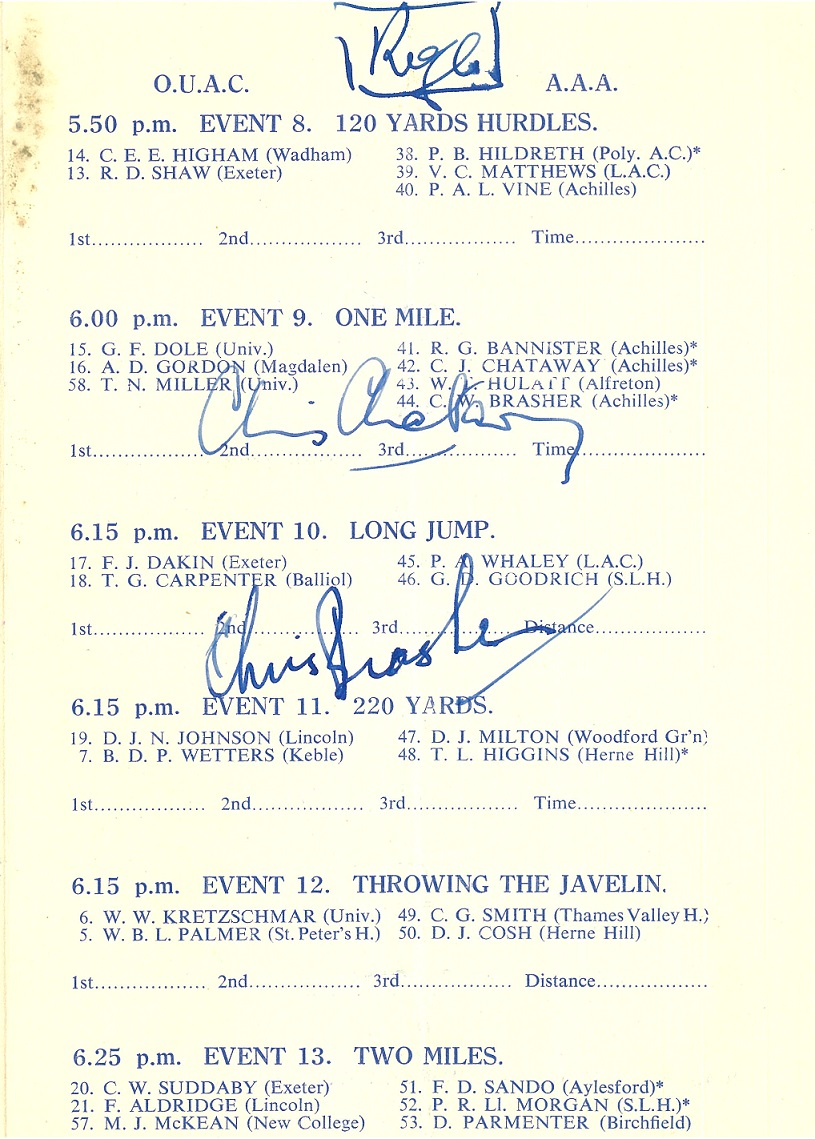 The official race card for the 6 May 1954 athletics meeting that featured the world record mile race, signed by Bannister, Chataway and Brasher, who are all listed as members of Achilles, the club for current and former members of the Oxford University Athletic Club

You can now find the catalogue of the archive of athlete, neurologist, and Master of Pembroke College, Sir Roger Bannister (1929-2018) online at Bodleian Archives and Mansucripts.

A talented middle-distance runner from childhood, Bannister came to the University of Oxford in 1946 to study medicine. He served as president of the Oxford University Athletic Club where one of his achievements was to redevelop and resurface Oxford’s Iffley Road athletics track, where he later won a world record. In 1949 in the European Championships, which was his first international event, Bannister won bronze for Great Britain in the 800m final. By 1951 he was ranked first in the world over the mile. In 1952, Bannister concentrated all his efforts on the Olympics in Helsinki, but even though he was considered a favourite, he finished a crushing fourth.

This blow left him on the verge of retiring from athletics, but instead he decided on a new goal: being the first man to run a mile in under four minutes. The world record was 4:01.3 but two other men were drawing close to it: Australia’s John Landy, and America’s Wes Santee, who both ran 4:02 minute miles in 1952 and 1953.

On 6 May 1954, at a meeting between Oxford University and the Amateur Athletic Association at Oxford University’s Iffley Road track, Bannister and his pacemakers Chris Brasher and Chris Chataway (then a student at  Magdalen) were in the AAA team, and lined up at the starting line. There was a false start: by Chris Brasher. The wind had been swirling all day and the decision to run had been touch or go until the wind suddenly dropped, just before the race. In his memoir Twin Tracks, Bannister remembers how angry he was at this delay, afraid that they might be about to lose the lull in the wind.  The starter’s gun went off again.

At first Brasher held the lead, pacing Bannister for just over two laps, and then Chataway took over. With over 200 yards to go, Bannister turned on his famous finishing kick and accelerated into the lead with the Oxford crowd screaming in the stands.

He crossed the line at 3:59.4, not only breaking the world record but running the first ever sub-four minute mile.

Instantly internationally famous, Bannister was sent by the Foreign Office on a tour of America, while also finding time that spring to qualify as a doctor, but 46 days later his world record was broken by rival John Landy. In August 1954, the Landy and Bannister met in one of the most anticipated races of the twentieth century at the British Empire [Commonwealth] Games in Vancouver. The ‘Miracle Mile’ put Bannister’s finishing kick on full display. Landy, who was in the lead, made a famous mistake when he turned nervously to look for Bannister over his left shoulder, only for Bannister to overtake him immediately on the right. Bannister beat his own record with a time of 3:58.8 but Landy retained the world record.

Roger Bannister retired from athletics that year to concentrate on his medical career. He practiced clinical medicine as a neurologist at both St Mary’s Hospital and the National Hospital for Nervous Diseases in London and did his national service with the Royal Army Medical Corps from 1957-1959, which included writing a life-saving report on preventing heat illness. His research interests were in the autonomic nervous system, with a particular interest in the neurological control of breathing, on orthostatic hypotension (a failure to regulate blood pressure) and on multisystem atrophy. From 1982 he was the first chairman of a body he largely inspired, the Clinical Autonomic Research Society. Also in 1982, he published the first textbook on the autonomic nervous system, Autonomic Failure.

From 1971-1974 Bannister served as the first chairman of the Sports Council (now called Sport England) and was knighted for this in 1975. He oversaw an increase in central and local government funding of sports facilities and he also introduced the first testing for anabolic steroids. He was subsequently appointed the president of the International Council for Sport and Physical Recreation (ICSPR). Between 1985 and 1993, he returned to Oxford to serve as Master of Pembroke College.

Roger Bannister published two autobiographies, The First Four Minutes (1955) about the four-minute mile, and Twin Tracks (2014) about his dual careers in athletics and medicine.

The archive includes correspondence and papers about the four minute mile, including training schedules and many congratulations letters and requests for appearances and advice. It also includes correspondence relating to his working career as a doctor, head of the Sports Council, and Master of Pembroke, as well as an extensive range of photographs covering his athletic career and public appearances.

Born digital material from the Recollecting Oxford Medicine oral history project has been donated to the Weston Library since the early 2010s, and the project is still active today with further interviews planned. A selection of interviews from the project are now available to listen to online,  via University of Oxford podcasts.

The Recollecting Oxford Medicine oral history project comprises interviews with Oxford medics, which provide individual perspectives of both pre clinical and clinical courses at the Oxford Medical School, medical careers in Oxford and other locations, and give an insight into the evolution of clinical medicine at Oxford since the mid 1940s.

The interviewees have worked in a range of specialisms and departments including psychiatry, neurology, endocrinology and dermatology to name a few. Episode 18 comprises an interview with John Ledingham, former Director of Clinical Studies (a position he held twice!), recorded by Peggy Frith and Rosie Fitzherbert Jones in 2012.  In episodes 11-12 we can learn about Chris Winearls – a self proclaimed ‘accidental Rhodes Scholar’ from medical school in Cape Town – his journey into nephrology and how he later became Associate Professor of Medicine for the university. 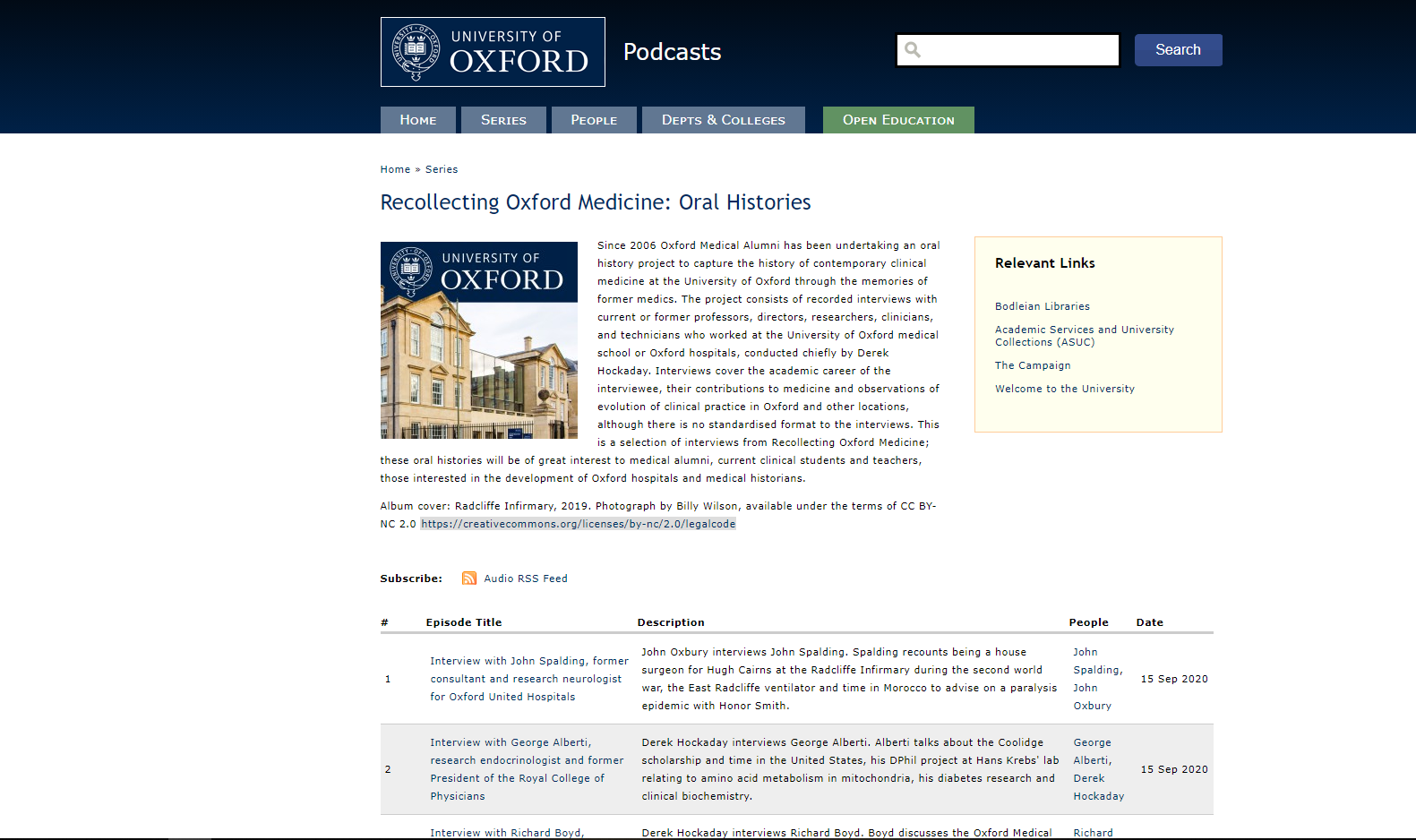 In episode 1, John Spalding,  interviewed by John Oxbury  in 2011, discusses working under Hugh Cairns, firstly as a student houseman at the Radcliffe Infirmary during the second world war.  Spalding also recounts his experience of the initial conception of the East Radcliffe Ventilator, first being devised for use in treatment of Polio. In episode 13 we can listen to Derek Hockaday’s interview with Joan Trowell, former Deputy Director of Clinical Studies for Oxford Medical School, which amongst other topics covers her experience of roles held at the General Medical Council.

The majority of the interviews were undertaken by Derek Hockaday, former Oxford hospitals consultant physician and Emeritus Fellow of Brasenose College. The cataloguing and preservation of the oral history project is supported by Oxford Medical Alumni. The library acknowledges the donations of material and financial support by Derek Hockaday and OMA respectively.

Listeners may also be interested in the Sir William Dunn School of Pathology Oral Histories, of which the archive masters are also preserved in the Weston Library.

The catalogue of a small collection of the papers of a twentieth-century female doctor is now available online, released as part of the Wellcome-Trust funded 75 Years of Penicillin in People project.

Margaret Pickles, known as Peggy, came to the University of Oxford to study botany but switched to physiology, earning her bachelor’s degree at Somerville College in 1936. After winning a competitive examination she studied for the next three years at the University College Hospital Medical School in London. She qualified as a doctor in 1939 and worked at the Bearsted Maternity Hospital and the Royal East Sussex Hospital in Hastings, returning to Oxford in 1941 to work at the Radcliffe Infirmary as the Nuffield Graduate Assistant in Pathology. She completed her doctorate (D.M.) at Somerville in 1947, which was published as Haemolytic disease of the newborn in 1949 and continued to work as a clinical pathologist and immunologist.

In 1950, aged 36, she married Alastair Robb-Smith, a distinguished pathologist who had been appointed Nuffield Reader in Pathology and head of pathology at Oxford’s clinical school (now the Nuffield Department of Medicine) in 1937, at the age of 29.

Her interests extended beyond medicine. In 1960 she published The Birds of Blenheim Park with the Oxford Ornithological Society. She also continued her botanical studies, breeding daffodils at her married home, Thomas Chaucer’s House in Woodstock.

The collection comprises mainly her degree certificates and family photographs, and offers a glimpse into the life of a multi-talented female scientist working at a time when women were generally discouraged from professional work.