The Conservatives’ 1983 general election manifesto stated, ‘We believe that a close practical working relationship between the United Kingdom and the Government of the Republic can contribute to peace and stability in Northern Ireland without threatening in any way the position of the majority community in the Province’ (see the Manifesto text). The statement opened the door to secret negotiations between the British and Irish governments, beginning in 1985 and culminating in the Agreement’s authorization on 15 November.

The Agreement set out two key points. It required that the Irish Government accept the present constitutional status of Northern Ireland – contrary to Articles 2 and 3 of the Irish constitution – agreeing that no change to this could be affected without a majority in the Province. The Agreement also required Britain to acknowledge that the Irish Government had a valid interest in the affairs of Northern Ireland. An Intergovernmental Conference was set up to discuss areas of mutual interest – especially relating to cooperation over cross-border security – and a permanent secretariat of civil servants from both countries was established in Belfast (read the full terms of the Agreement).

Although the British Government objectives in the Agreement were met, the reaction elsewhere was generally hostile. The Agreement passed the House of Commons by 473 to 47, but its reception in the Dáil was less than enthusiastic with 88 votes in favour and 75 against. In Parliament Mrs Thatcher faced opposition from both the Ulster Unionist and Democratic Unionist leaders James Molyneaux and Ian Paisley, while the Ulster Unionist MP Enoch Powell famously asked her in the Commons on 14 November 1985, ‘Does the right hon. Lady understand—if she does not yet understand she soon will—that the penalty for treachery is to fall into public contempt?’ (text of the exchange is available from the Thatcher Foundation).

In the Republic, Charles Haughey, leader of Fianna Fáil, was hostile to any acknowledgement of the change in the constitution; Mary Robinson, the future President of Ireland, resigned. In Northern Ireland not only was the Agreement opposed by Gerry Adams of Sinn Fein, but the UUP and DUP MPs resigned en masse, orchestrating a campaign of civil disobedience.

As the BBC reported, Thatcher herself ultimately came to the opinion that the Anglo-Irish Agreement was a mistake (BBC News, 23rd November 1998).

Multi-Party peace talks on the future of Northern Ireland did not occur until the IRA began decommissioning its weapons in 1997; eventually these talks led to the Good Friday Accords, which superseded the Anglo-Irish Agreement.

HMS Dreadnought, the UK’s first nuclear-powered submarine, was launched by the Queen on Trafalgar Day, 21 October 1960.

Although laid down on 12 June 1959 for an estimated £18.4 million and launched in 1960, she was not commissioned until 17 April 1963, following her first dive on 10 January 1963. The world’s first nuclear-powered submarine, the USS Nautilus, had been completed by the US Navy in 1955, and British manufacturer Vickers Armstrongs was able to use this American nuclear technology to complete the Dreadnought. After 20 years’, service the Dreadnought was decommissioned in 1980. 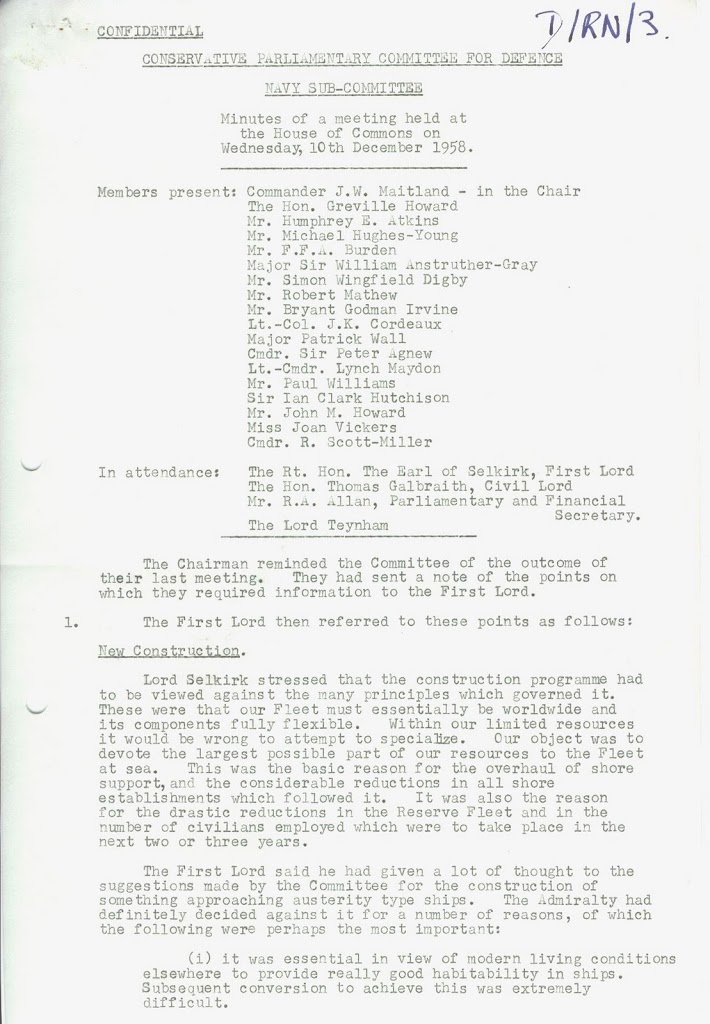 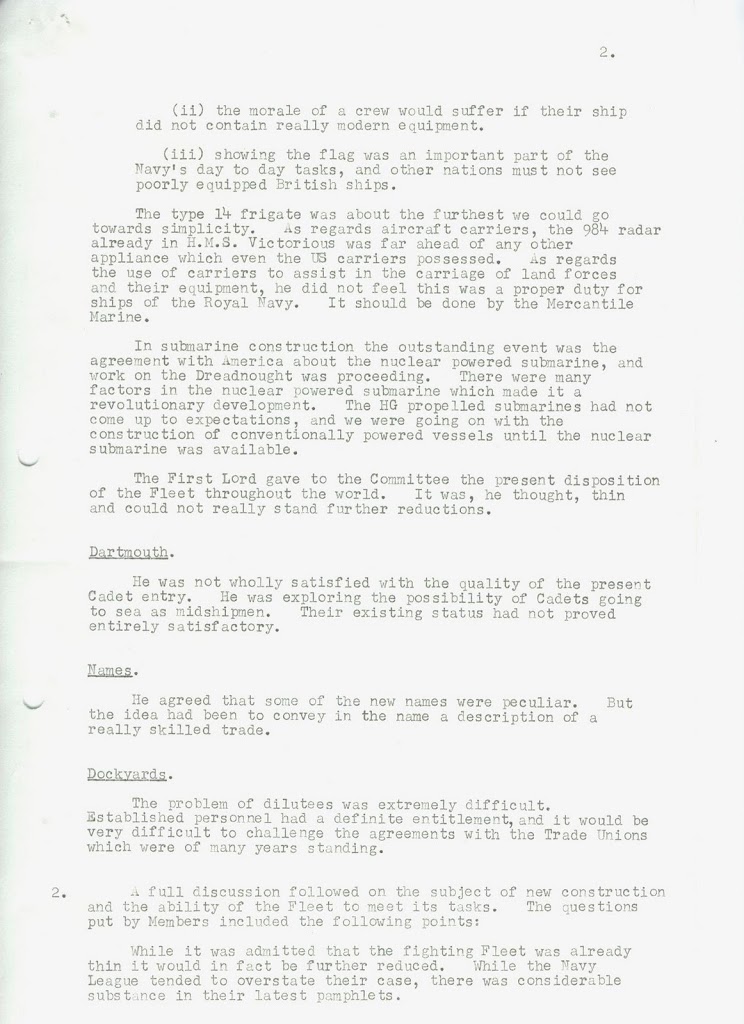 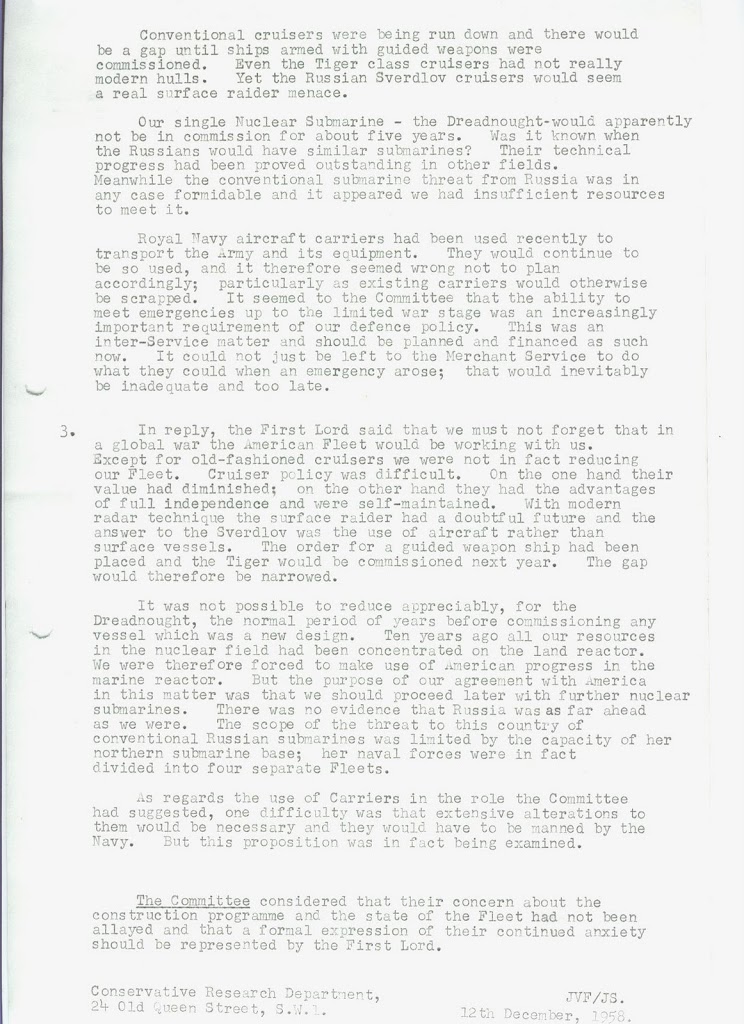 Minutes of the meeting of the Naval Sub-Committee of the Conservative Parliamentary Defence Committee, which was attended by Lord Selkirk, First Lord of the Admiralty, on 10 December 1958. Selkirk briefed the Sub-Committee on the constraints on new naval construction, the progress being made on the Dreadnought, and the concerns at the Soviet naval dominance and advances in nuclear propulsion [CRD 2/36/7] 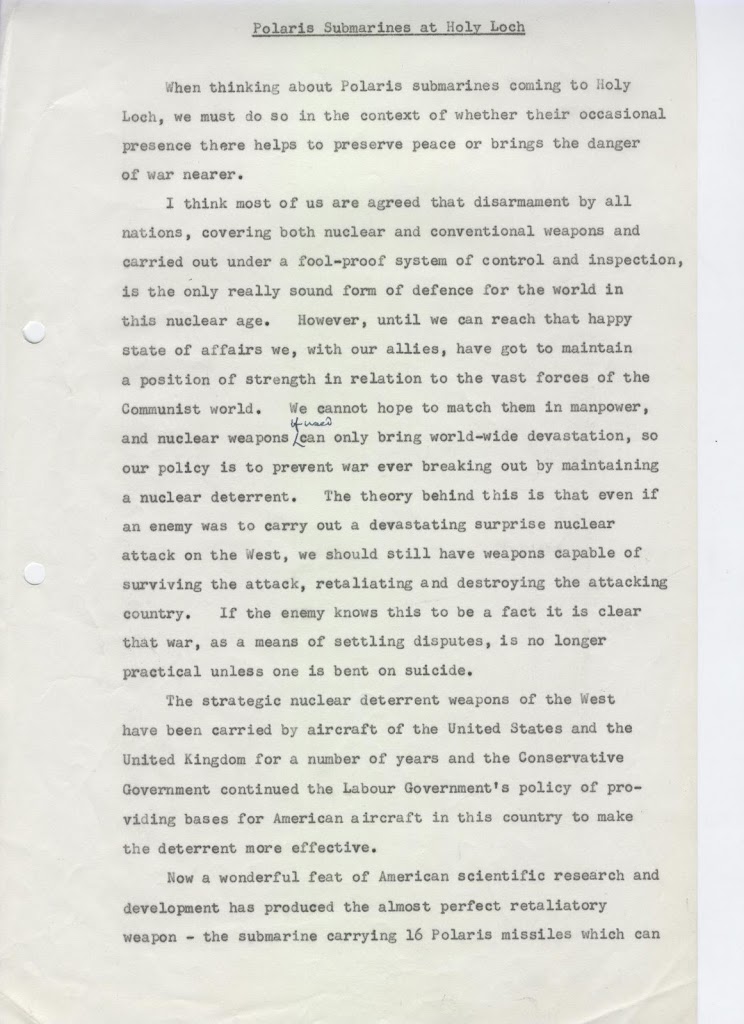 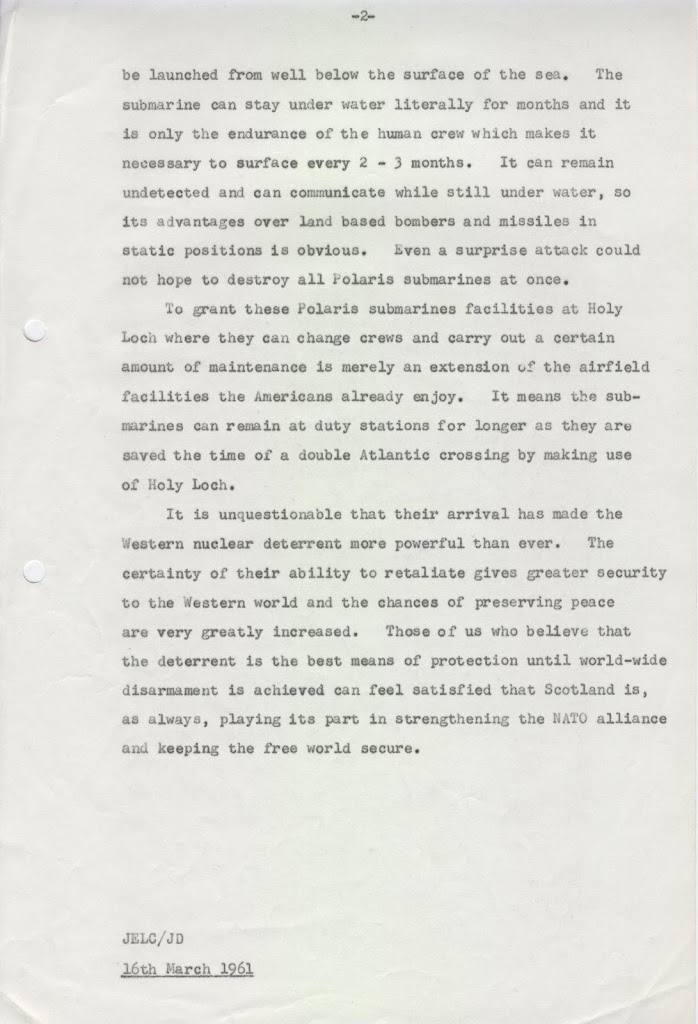 The second British nuclear submarine, HMS Valiant, was wholly British in design and manufacture, incorporating a new British nuclear propulsion system co-designed by Rolls Royce. It was ordered from Vickers Armstrongs on 31 August 1960. Later that year, on 1 November, the Prime Minister announced in the House of Commons that a sheltered anchorage for American Polaris submarines had been granted at Holy Loch in Scotland.

Apologies for the lack of posts; July has meant holidays as well as hard work here at the Archive! We’re back with a snippet of 50-year-old history – albeit one that has continued to make headlines ever since… 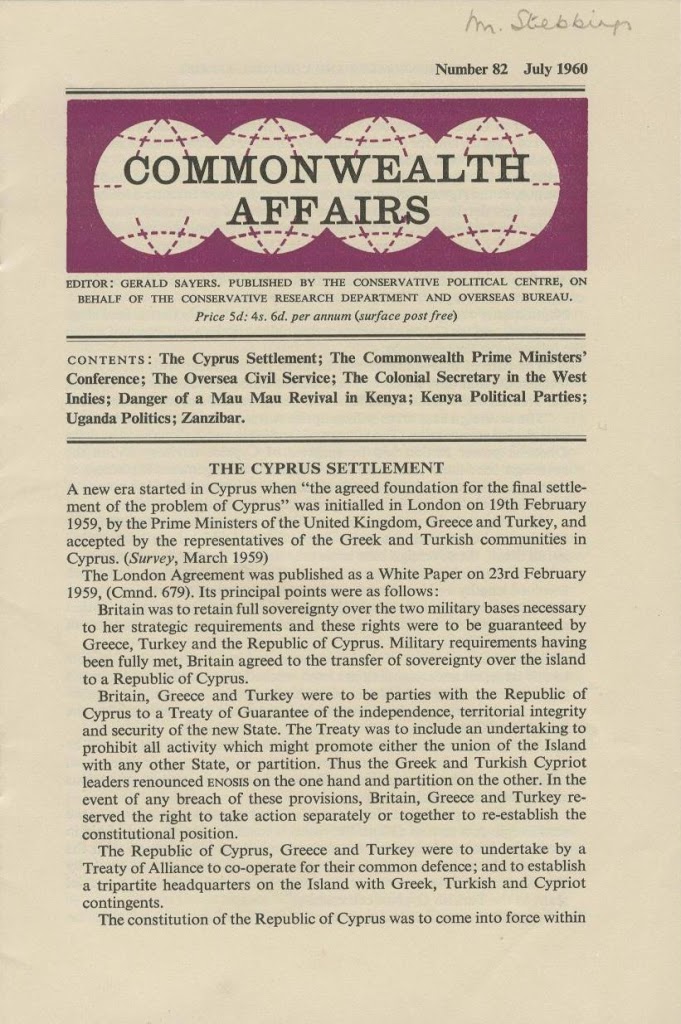 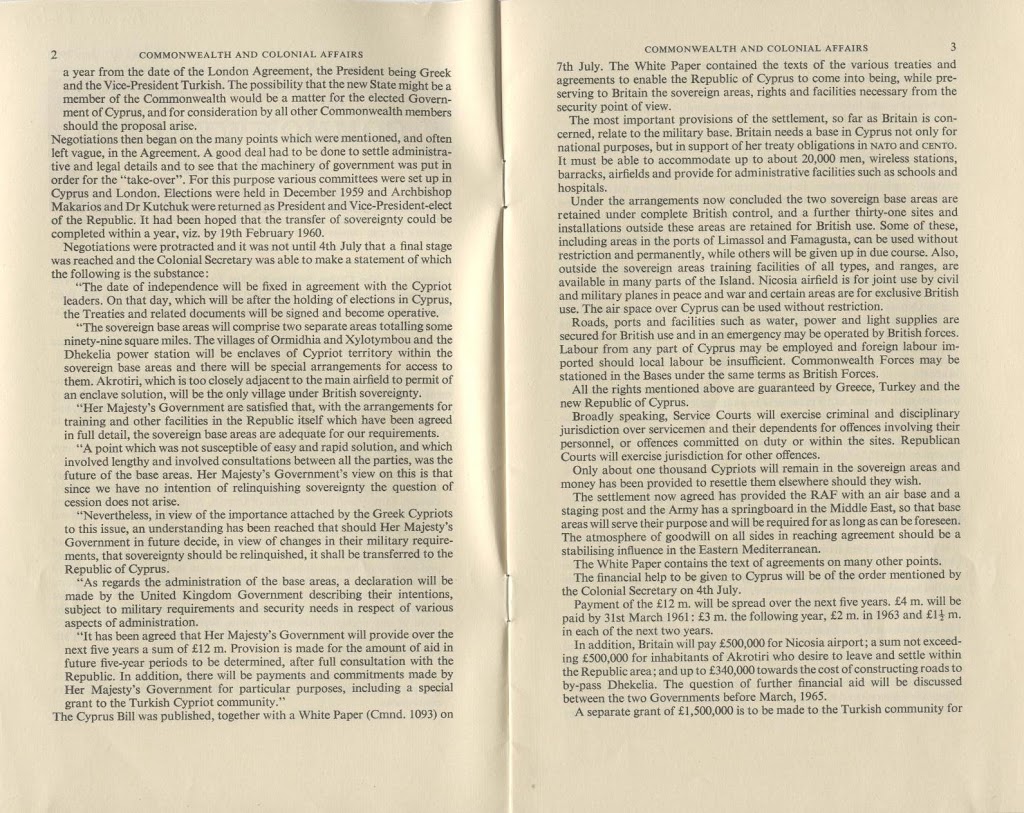 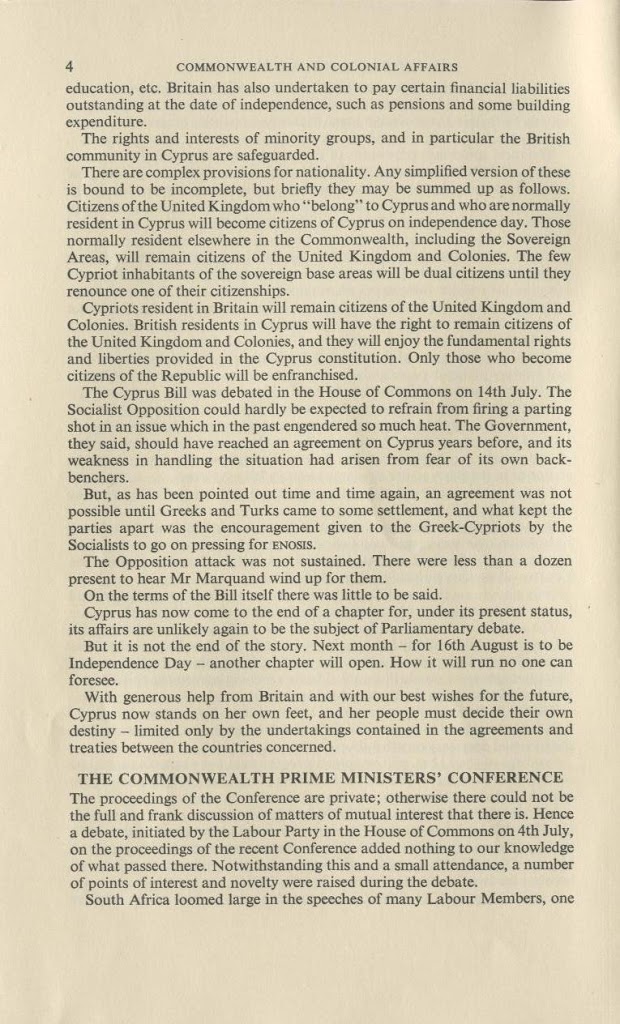 60 was a significant year in Britain’s post-War decolonisation process; British Somaliland gained independence on 26 June, Cyprus on 16 August, and Nigeria on 1 October, while both Ghana and South Africa voted to become republics.

In many cases, British rule provided only a fragile veneer of unity over inter-communal tensions – Cyprus is a case in point. Although Cyprus had been under British administration since 1878 and a British Crown Colony from 1925, from 1955 British troops were confronted with the EOKA campaign by Greek Cypriots led by Archbishop Makarios (the future first president of independent Cyprus) in support of ‘enosis’ – independence and union with Greece – while the Turkish Cypriots responded with a counter campaign in favour of ‘Taksim’ – partition.

Following the failure of the 1955 Tripartite Conference between British, Turkish and Greek officials, the Conservative Government was attacked by the Labour Opposition for unnecessary delay. The Government was reluctant to see either solution implemented but keen to withdraw from Cyprus while guaranteeing the future of the British military presence on the island.

Following several years of violence and even a state of emergency, the Prime Minister put forward the Macmillan Plan in June 1958. The plan was rejected by both sides but proved to be a starting point for discussions for a workable alternative solution to union with Greece or partition. Eventually agreement was reached in London for a power-sharing compromise which guaranteed the rights of the Turkish Cypriot minority. The agreement (text available here) was signed by British, Greek, Turkish and Cypriot leaders on 19 February 1959 and came into effect at midnight on 16 August, 1960.

On 12 March 1959, Conservative Colonial Secretary Alan Lennox-Boyd attended a meeting of the Party’s Commonwealth Affairs Committee at the House of Commons to brief Members on the details of the recently agreed plan: ‘He felt that Britain had gained a good deal out of the Agreement. Above all, concord was now established between Britain, Greece and Turkey, and this was an immense gain to NATO. Then Britain had obtained the bases she wanted; also both ENOSIS and partition were now ‘out’.

However, he said the Agreement had only come about because of the war-weariness of the majority of the population, and a growing fear of Communist infiltration by the Greek Cypriots: ‘He agreed that Socialist statements [i.e., in Britain] had made it more difficult to get agreement but he did not think that in the debate we should over stress the Party line: nor would he favour harmful references to Makarios. The great thing now was to look forward to a happier era for Cyprus. It would not be all plan sailing and he would not mind if a word of warning was sounded in the debate…’ [Commonwealth Affairs Committee minutes, 12 March, 1959: CCO 507/1/1].

The arrangement survived for just three years before inter-communal violence broke out again and British troops returned to a peace-keeping role on the island as part of a UN contingent.