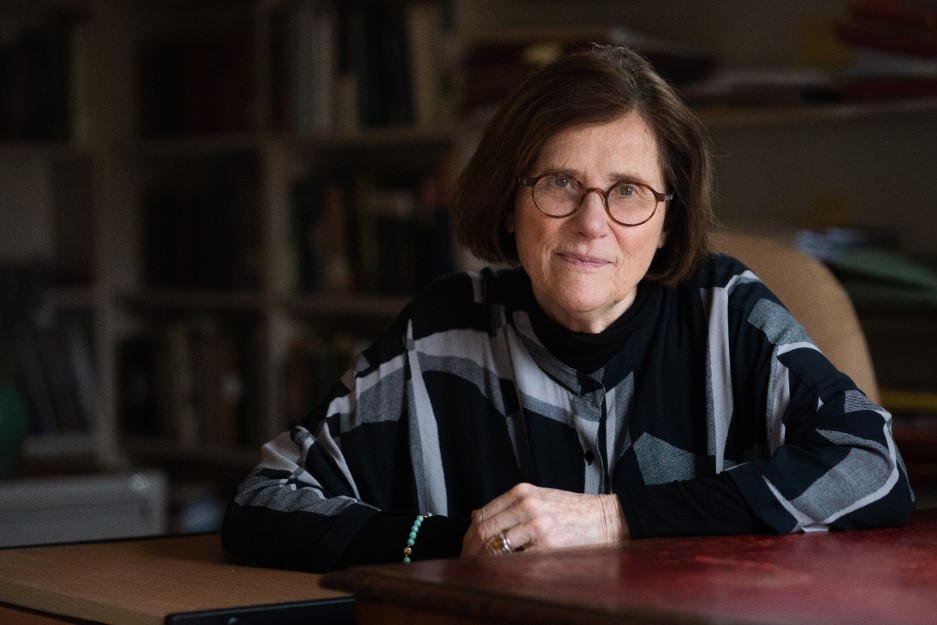 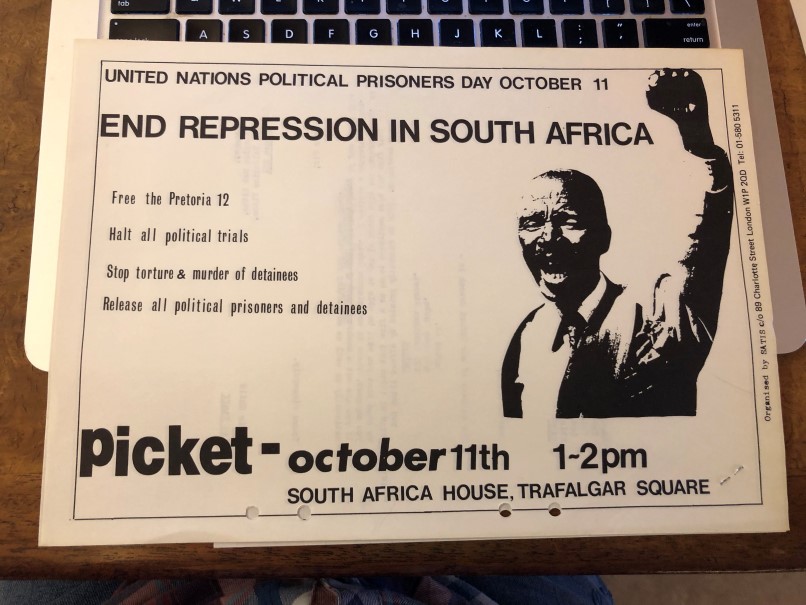 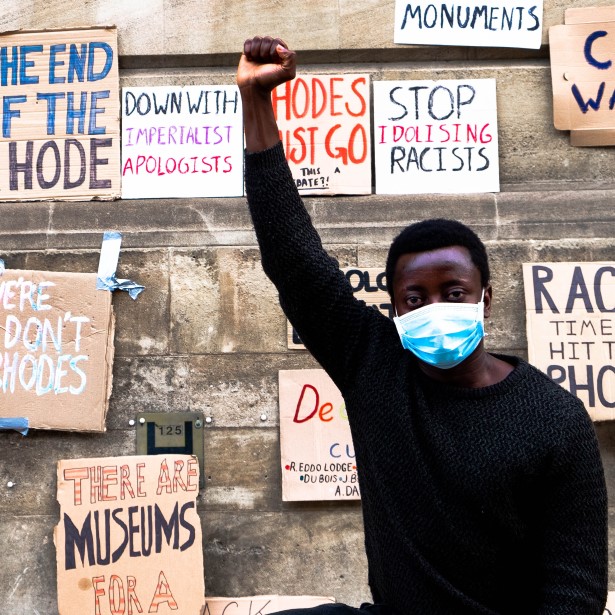 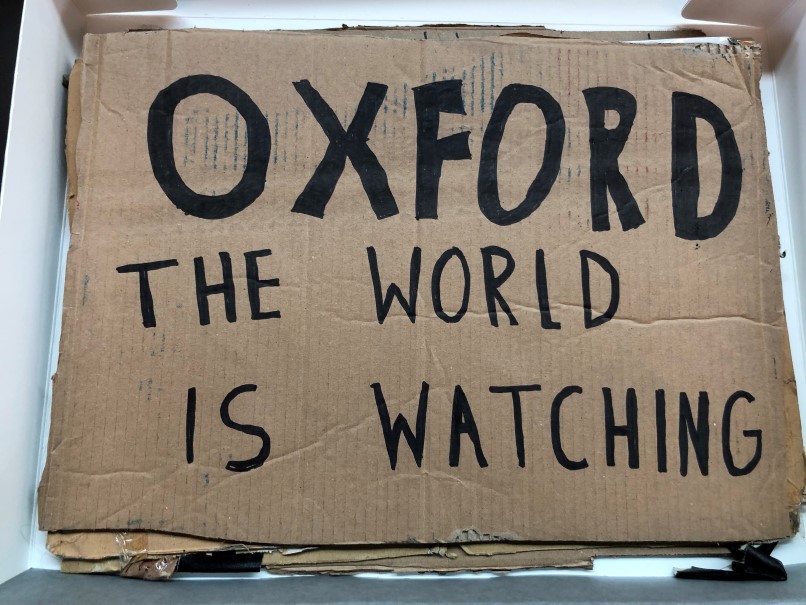 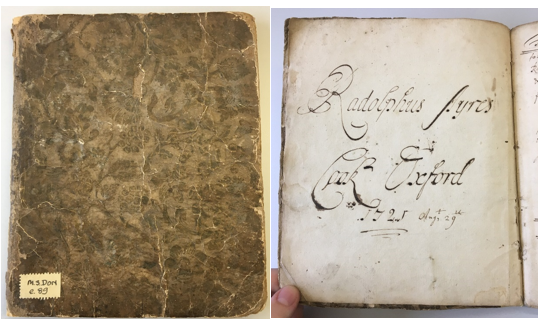 As someone who has always enjoyed baking and has a love of all things historical, finding old recipe books is one of the most exciting things about working in archives. I love when cooking shows explore what people of the past would have eaten, and the different ingredients they would have used to create what we now consider modern classics. Working on the retro-conversion of the Bodleian Libraries New Summary Catalogue since September (you can read about our project here) has allowed me to discover a fair few recipe books, with some of the treats far more enticing than others… After some deliberation, I chose this 18th century recipe for gingerbread – a tried and tested festive favourite. I wanted my colleagues to actually taste it and thought it might be slightly more appetising than the vast range of pickles, a 14th century recipe for the plague, or mince pies that were made with veal hearts and tongues (that one I vetoed pretty quickly myself). Gingerbread seemed like a safe option, and I also thought dried ginger might perhaps be easier to source than “dragon warter” – weirdly Tesco didn’t have any in stock when I asked.

So here’s what I had to work with: 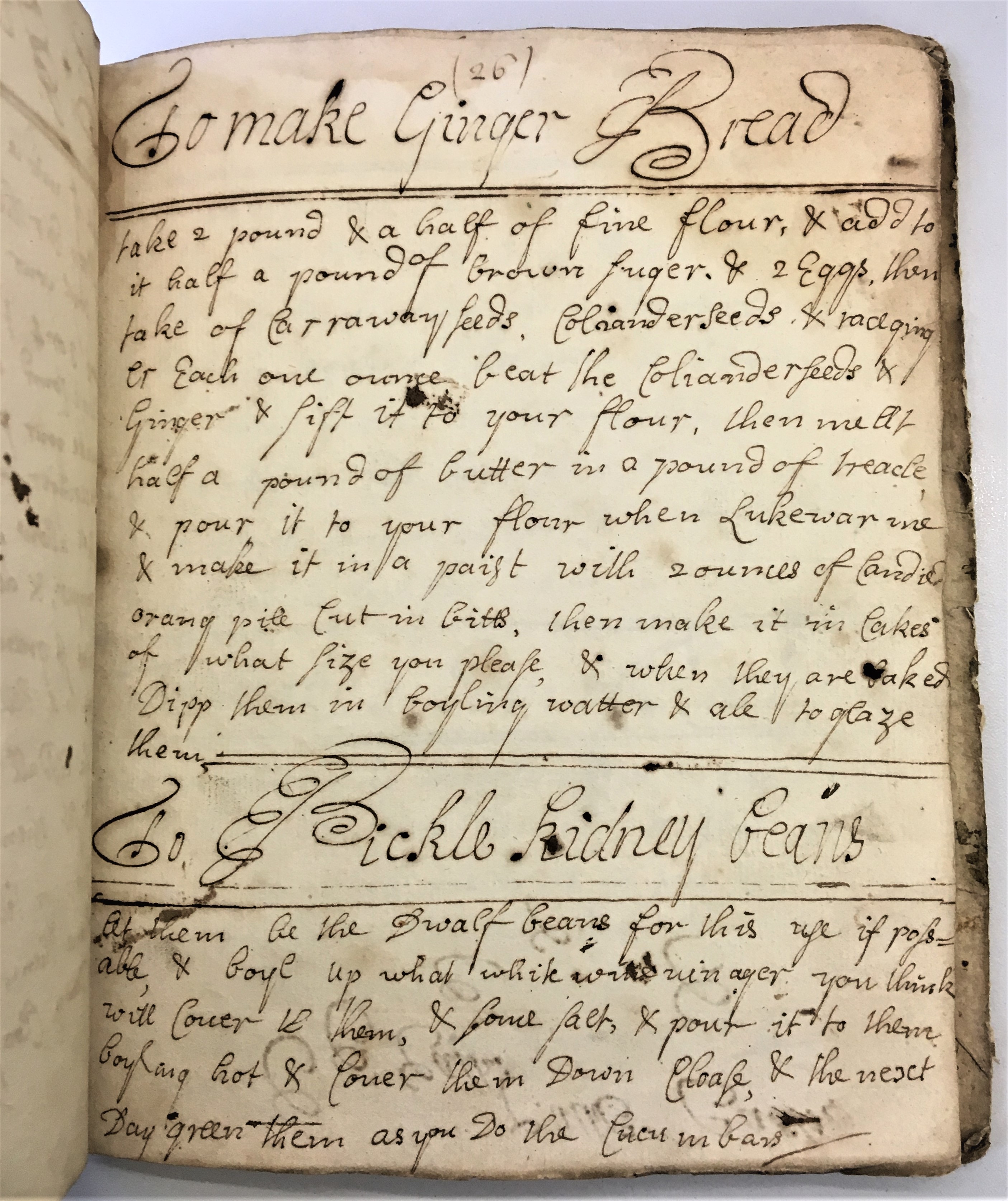 Before attempting this slightly vague bake (and figuring out how/if I was going to dip the cake in a mixture of “boyling watter and ale”), I decided to do a bit of research into the history of gingerbread. When did this delicious treat make its way into our lives? The important stuff.

So, ginger root was first cultivated in China, where they used it for “medicinal and magical” purposes. Ginger is still used today in medicine to help things like travel sickness – something anticipated by John Baret in his Alvearie or triple dictionaire of 1573-80, and Henry VIII even thought it might help build up resistance to the plague in the 16th century. In Roman times, the spice was known as “zingiber” from the Sanskrit “sringavera” and was used for cooking and medicinal purposes as it travelled in from the Silk Road from the 2nd century AD. Caravans came from China full of silk, ginger and cinnamon to a meeting point in central Asia where the Romans would be able to barter for these luxury items. They loved ginger so much that a pound of the spice was worth the same as a sheep!

Ginger supplies dried up after the fall of the Roman Empire when trade routes crumbled but the spice was then reintroduced freely across Western Europe. This was supposedly with returning crusaders, or through the Venetian explorer Marco Polo in the 13th century – there is quite a bit of ambiguity here. The Germans, Austrians and Hungarians were the first to develop honey and spice flour based doughs, adding candied fruits and nuts, and in France they used a simple spice recipe called “Pain d’espice”. In Medieval England, gingerbread simply meant “preserved ginger”, with the spice being used to cover up the taste of preserved meats in the winter. By Elizabeth I’s reign, between 1533 and 1603, gingerbread was eaten by wealthy aristocrats. The queen is even credited with inventing gingerbread men by asking for the biscuits to be decorated as important members of her court for a celebration.  By the 17th century, gingerbread was being sold at fairs and for special occasions in England but it was nothing like the gingerbread we love now. Valerie Barrett explains how it was “made from stale bread, honey, pepper, aniseed, with saffron or liquorice for colouring, and ginger… mashed together, moulded or shaped and dried until hard and brittle”. Doesn’t exactly sound appetising! Treacle was introduced later in the 17th century and the recipes began to change into the biscuits and cake we know today.

Gingerbread recipes travelled to America with the first English settlers, where they swapped the sugar for golden syrup. There are many variations of gingerbread, from the decorated gingerbread men and houses (popularised after Hansel and Gretal was published in 1812), to Yorkshire Parkin or American Hot gingerbread. If you want to explore the multitude of recipes I would definitely recommend The Complete Book of Gingerbread by Valerie Barrett, The Gingerbread Book by Steven Stellingwerf and The Book of Gingerbread by Carla Capalbo (all available to read at the Bodleian Libraries, references below). Although gingerbread is now made mostly at home or bought in supermarkets, it remains a part of the European Christmas tradition.

Now that I have explored gingerbread and its roots (however ambiguous), I can unveil my 18th century creation:

Although most of the ingredients were easy to acquire, I had to settle for candied mixed peel instead of simply orange peel after checking 4 different supermarkets. I also didn’t complete the last step. Unfortunately dipping the cake in ale and water made the bake soggy and un-transportable… not ideal when I needed opinions from my colleagues! The recipe itself was questionable, with the mixture not actually coming together at all until I added some warm water, though I put this down to the ingredients probably being slightly different and also the recipe being quite vague.* Either way, it got into the oven and made the house smell like caraway and coriander seeds for quite a few days!

My colleagues all agreed this was “interesting”, something I definitely agreed with. Many thought it was almost savoury in flavour and was quite dry and dense, though most enjoyed it enough to eat a whole piece and some even went back for seconds! My favourite reviews have to be “first time I’ve been unable to finish a baked good, 1/10” and “pleasingly festive, surprisingly spicy, 6/10”. 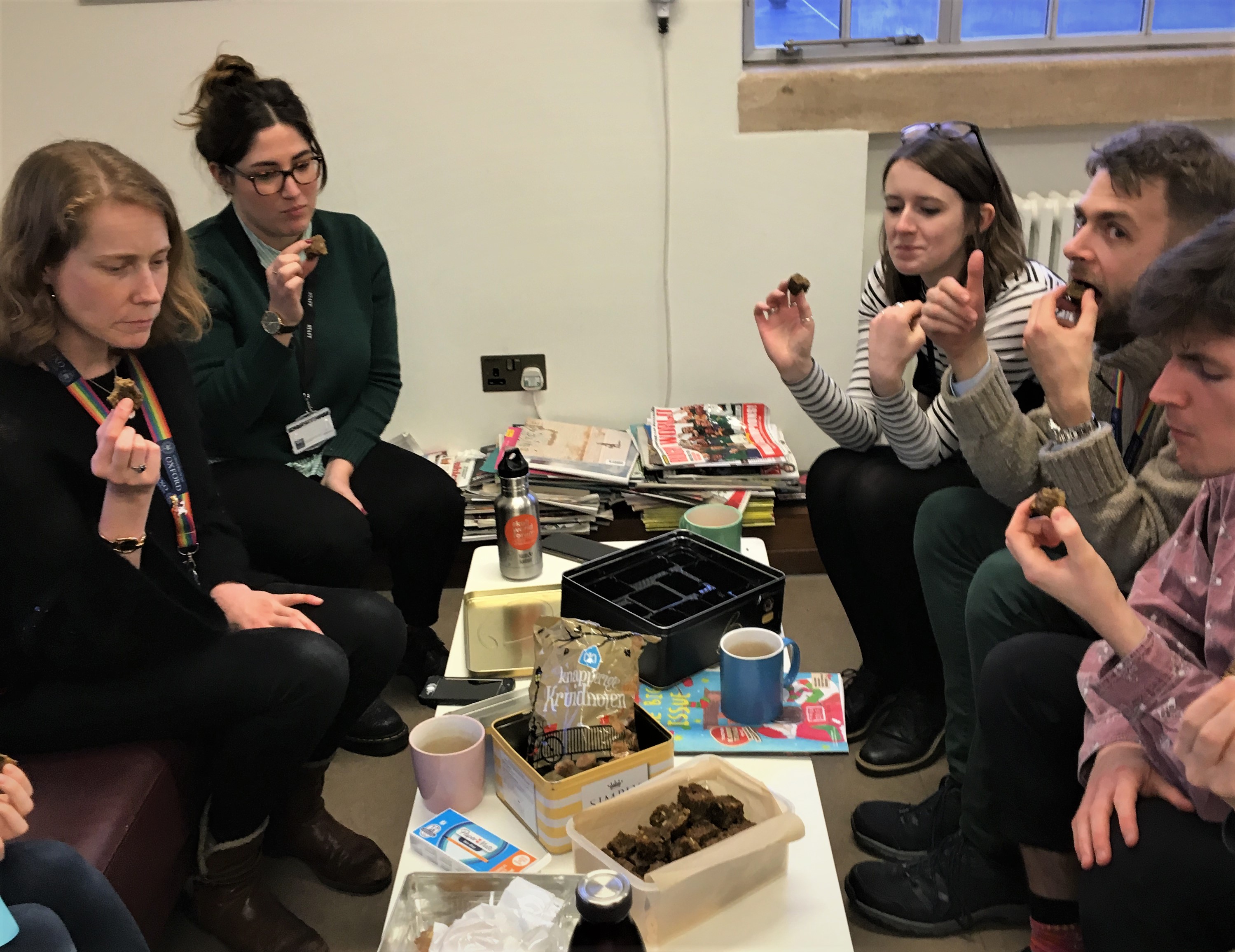 If you want to explore the original Radolphus Ayres cookbook, you can find and request it here on the new Bodleian Archives and Manuscripts website. Look out for some more interesting things found in the Summary Catalogue conversion project in the New Year, and Merry Christmas to all who celebrate!

The Complete Book of Gingerbread by Valerie Barrett (The Apple Press, London, 1992)

The Book of Gingerbread by Carla Capalbo (Ebury Press, London, 1984)

The Guardian “A Brief History of the Gingerbread House” by Antonia Wilson, 22 Dec 2018, URL: https://www.theguardian.com/travel/2018/dec/22/a-brief-history-of-the-gingerbread-house

* I found out at a later date that the recipe book was published in 2006, Ralph Ayres Cookery Book edited by Jane Jakeman (Bodleian Library, Oxford, 2006), and this would’ve made the recipe conversion a lot easier!

A new website for Oxford College Archives has been launched at https://oac.web.ox.ac.uk/. 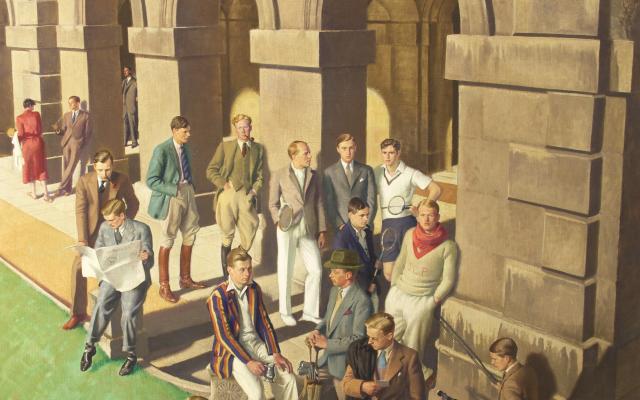 The site includes a general introduction to the archives held by the Oxford colleges, individual pages on most of the colleges (with further links to catalogues etc.) and links to associated archives in the City and University.  There is also an FAQ page, a glossary of all those odd Oxford terms, and a bibliography.  The site will be enhanced and updated regularly.