The Archive of Sir Walter Bodmer comprises an impressive sequence of professional, scientific and some personal correspondence. The correspondence spans the extent of Sir Walter’s career, through his early education at Cambridge University to his later career in Oxford.  Importantly, incoming letters have been filed with the geneticist’s copy letters, which should prove invaluable for researchers.

Cataloguing the correspondence has been fascinating, not least because it really does feature a who’s who of the world of genetics and science. I was particularly interested to find a bundle of correspondence from 1963 between Walter Bodmer, Eric Ashby (later Lord Ashby and master of Clare College, Cambridge) and Francis Crick, one of the founding fathers of Genetics, who, at this time, was based in Cambridge’s Laboratory of Molecular Biology (LMB). Cambridge in fact provided the setting for Bodmer’s early genetics career.

Bodmer was first drawn to statistics as a mathematics undergraduate at Cambridge. His interests led to him to the statistically oriented lectures of the Genetics Department by the renowned statistician Sir Ronald Aylmer Fisher. After graduation Walter Bodmer remained in Cambridge researching population genetics under the influence of Fisher (who, in Bodmer’s own words, will always be one of his greatest heroes). After completing his PhD, he stayed in Cambridge on a Junior Research Fellowship and as a Fellow of Clare College and Demonstrator in the Department of Genetics.

Throughout his time in Cambridge, it was through R. A. Fisher that Bodmer was exposed to the world of genetics and geneticists, including Francis Crick. Importantly, not only was Cambridge itself the one of the most stimulating environments for geneticists to be, but the period has been marked as the most exciting time in the history of genetics. This was the early days after the discovery of the double helix structure of DNA by Crick, James D. Watson, Maurice Wilkins and Rosalind Franklin (like Bodmer, Watson was also at Clare College where he later became an honorary fellow).

In an interview with Dr. Max Blythe for the Medical Sciences Video Archive, Bodmer recalls this significant early period in his career at Cambridge:

My first hearing of the structure of DNA was when Fisher, in one of his very mathematical lectures either in ‘55/’56 or the following year, took out his pocket – and I still remember it – a crumpled copy of a paper that Watson and Crick had written for the Cold Spring Harbor symposium on the structure of DNA. He gave a beautiful description of the structure of DNA, very simple, I have still got my notes on it, then proceeded to go on with a very abstruse lecture on the mathematical theory of genetic recombination or something like that. So that was how I first heard about it, but because of that inter-relationship, Francis Crick was quite friendly with people in the Genetics Department and in my early days as a graduate student there, we had contact with him, and that was an important influence.

In fact, Francis Crick was a close friend of R. A. Fisher as they were both at Caius College. Through his connection with Fisher and Crick, Bodmer came to have some contact with the MRC Unit at the Cavendish Laboratory where Watson and Crick had deduced the structure of DNA in 1953 (and it was here, in the late ‘50s, that Bodmer was probably influenced to turn towards molecular biology). It was this contact that essentially marked out his subsequent and highly successful career as a molecular biologist and population geneticist.

The letters were written when Walter Bodmer was in Stanford undertaking postdoctoral research, and the opportunity to return to Cambridge to further his career in the Laboratory of Molecular Biology was presented to the young scientist. This must have been a thrilling proposition for Bodmer, and it is clear much thought was given to this opportunity, which must have proved a real dilemma.

Bodmer had left Cambridge for Stanford in 1961, initially with the intention of staying for just one year. Yet, the young scientist thrived at Stanford where he worked as Post Doctoral Research Fellow to Nobel Prize winner Joshua Lederberg (whose expertise lay in gene exchange in bacteria). By 1963, Bodmer had been offered the post of Assistant Professor in the Stanford Medical School. However, as the letters illustrate, there was also the possibility of Bodmer returning to a lectureship in the Genetics Department at Cambridge. While an established position with the prospect of tenure, he may not have considered this to be the best option given his switch to an interest in molecular biology (as illustrated in the letters, Eric Ashby and Francis Crick were trying to arrange a more attractive position at the Laboratory of Molecular Biology). In addition, Clare College had separately offered to make Bodmer an official Fellow if he returned, also an established position.

While in America, Bodmer became drawn to studying the more biochemical and molecular aspects of genetics. On his way to Stanford in 1961, he attended a course in molecular biology at Cold Spring Harbor Laboratory in New York, one of the great meccas for molecular biologists. By 1963 (when the letters were written), Walter Bodmer had established a strong career in molecular biology, and was working more or less independently in the Lederberg laboratory in Stanford. He then moved to work on somatic cell genetics, which would become a lasting involvement throughout his career. Another major research area initiated during his time at Stanford was with his wife Julia Bodmer, on work that contributed to the discovery of the major human histocompatibility system, HLA. During his time in Stanford, Walter Bodmer had also made contact with Luca Cavalli-Sforza, whom he first met in Cambridge around 1957.  In Stanford they they began working collaboratively by giving a course in population genetics and working on text book the Genetics of Human Populations (published 1971).

The possibilities offered in Cambridge really must have involved painstaking decision-making, yet as is clear, his time in Stanford really solidified his successful career and he remained here until his return to the UK in 1970 to take up the Chair in Genetics at Oxford University. 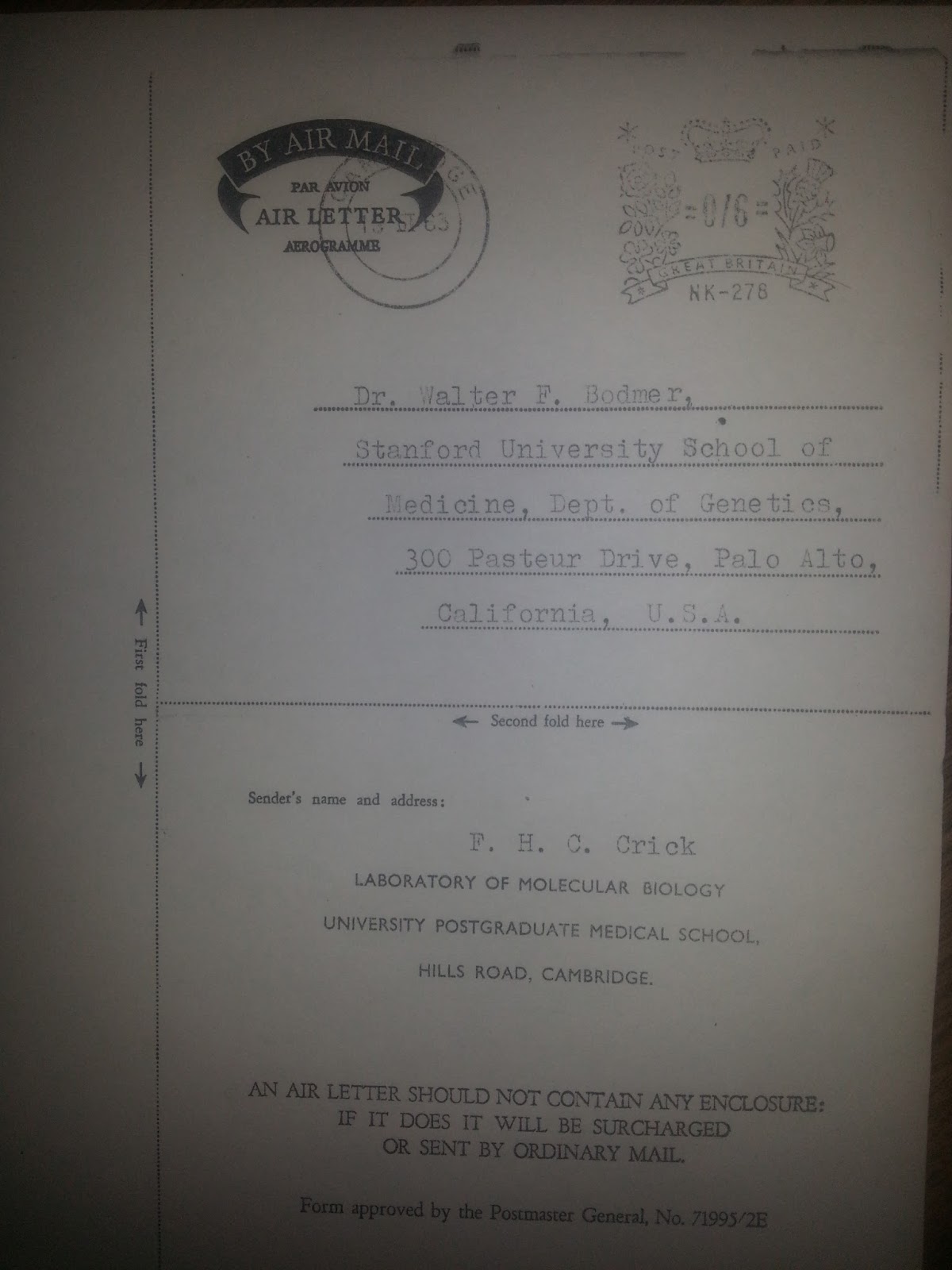 It is evident, both in the letters and other papers in the archive, that Bodmer’s potential as a scientist was recognised at an early stage in his career. Over the next few months I hope to highlight further gems from Sir Walter’s archive that capture his influences from the world of science.