Thanks to additional funding from The Thriplow Charitable Trust, we have been able to open more boxes from the archive of the politician Roy Jenkins. Newly available material includes correspondence and papers from his time in opposition and government in the 1970s, and his time as President of the European Commission from 1977-1981. It also includes some general correspondence from the 1980s, when Jenkins re-joined Parliament as a Social Democratic Party (SDP) MP, as well as some correspondence from his time in the House of Lords.

The recent death of former Chancellor of the Exchequer Denis Healey at the age of 98 reminded me of a curious connection in the Roy Jenkins archive. Not only were Healey and Jenkins Labour Party and ministerial colleagues but in 1986, The Times commissioned Jenkins to revise what turned out to be Denis Healey’s very premature obituary. 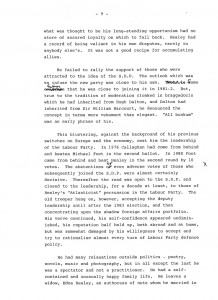 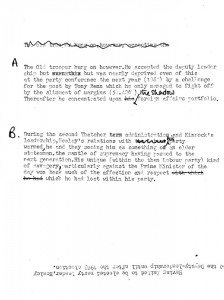 This newly released file [see MS. Jenkins 440] contains multiple manuscript and typescript drafts of the obituary, as well as Jenkins’ notes and research, including photocopies from The Times regarding Healey’s famous phrase “they must be out of their little Chinese minds”.

Enclosed with the file is a letter from John Grigg, obituaries editor for The Times, calling the final version “a masterpiece in the genre”. It’s by no means the only acclaimed biographical work by Roy Jenkins. A life-long author as well as a life-long politician, he specialised in political biography. He wrote well-received books about Attlee, Dilke, Truman, Asquith, Gladstone, Churchill and Roosevelt and (not least) his own memoir, A Life At The Centre (1991). You can find drafts and related papers for his books and his journalism (including more obituaries) in the Roy Jenkins archive at the Weston Library. He also wrote five pieces for the Oxford Dictionary of National Biography, including articles on his former Labour colleagues Harold Wilson and Tony Crosland [DNB subscription required].

The catalogue of the papers of Roy Jenkins is now online and the archive is available for readers in the Weston Library. On 5 November 2014, the Bodleian Library will be celebrating the lives and archival legacies of Roy Jenkins and former UK Prime Minister Harold Macmillan with a discussion between their biographers John Campbell and D.R. Thorpe and current Chancellor of the University of Oxford, Lord Patten. This event is free and tickets can be booked online. 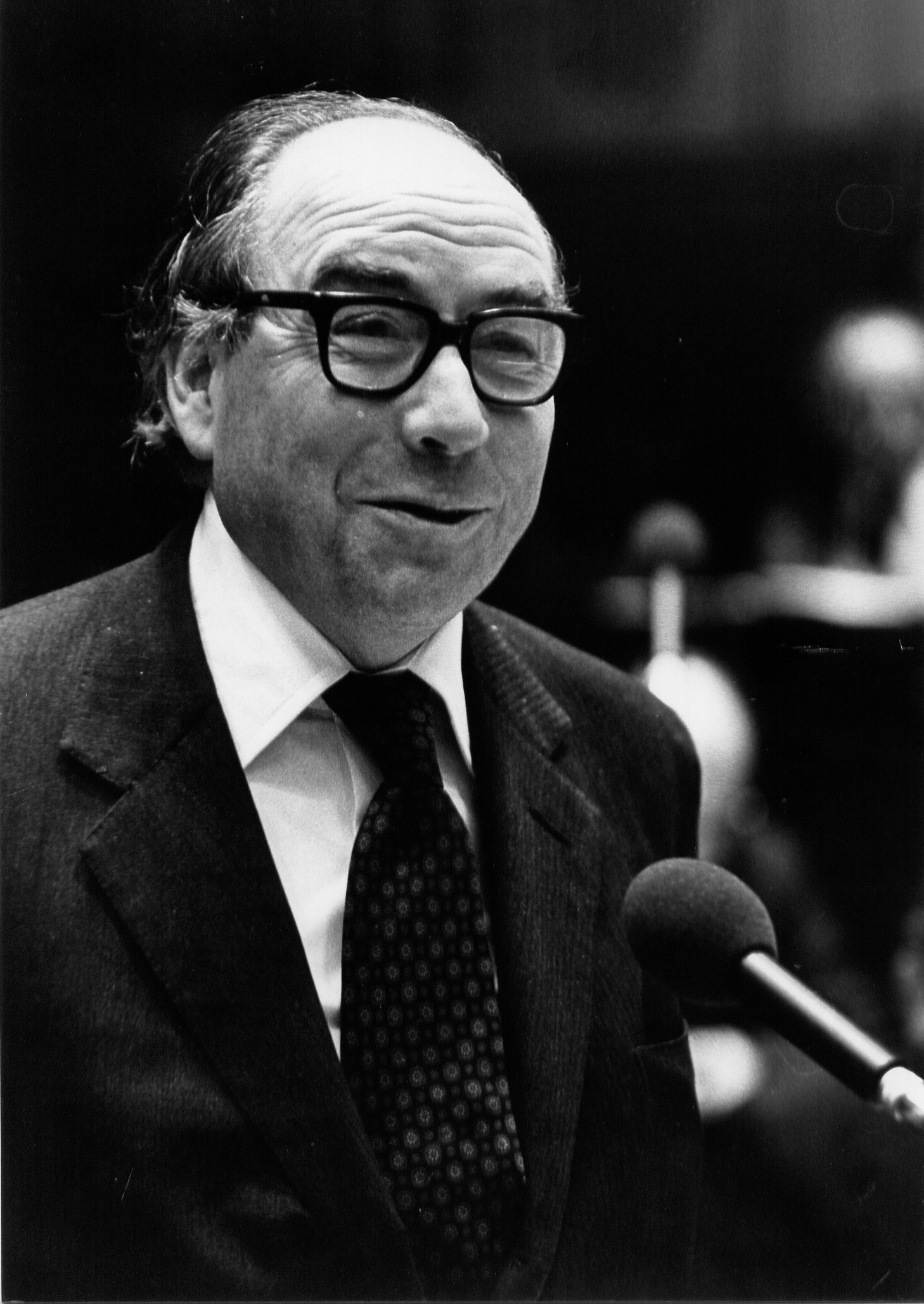 Who Was Roy Jenkins?

Roy Jenkins, Baron Jenkins of Hillhead (1920-2003) was a British politician, author, and latterly Chancellor of Oxford University. His father Arthur was a miner’s agent and mine union leader who in 1935 became the Labour Party MP for Pontypool in Wales and later parliamentary private secretary to Clement Attlee (whose archive is also in the Bodleian Library). Steeped in Labour politics, a parliamentary career was Jenkins’ ambition from a young age. He studied Politics, Philosophy and Economics at Balliol College, Oxford, and served during World War II as an artillery officer and Bletchley code breaker. He didn’t wait long, though, before seeking a seat in Parliament – succeeding in 1948.

Member of Parliament and President of the European Commission

Jenkins’ career was illustrious. Under Labour Prime Minister Harold Wilson, Jenkins became Minister of Aviation (1964), Home Secretary (1965-7, 1974-6), Chancellor of the Exchequer (1967-70) and deputy leader of the Labour Party (1970-2). A reforming Home Secretary, he oversaw the liberalization of the laws on divorce, abortion and homosexual activity, as well as abolishing theatre censorship.

After Wilson announced his resignation in March 1976, Jenkins failed in a campaign to become Labour Party leader and resigned to take up a position as President of the European Commission (1977-81). Upon return to the UK, and estranged from the Labour Party, Jenkins was a founding member of the Social Democratic Party (SDP). He was elected as SDP member for Hillhead, Glasgow in 1982, losing the constituency in 1987 and leading the SDP into a merger with the Liberal Party – renamed the Liberal Democrats.

Life peer and Chancellor of Oxford

No longer an MP, Jenkins was elected Chancellor of the University of Oxford in 1987, a position he held until his death. He was given a life peerage and was, from 1987, leader of the Lib-Dem peers in the House of Lords. Jenkins continued to exercise political influence, including as a mentor to Tony Blair.

Alongside his political work, Jenkins had a distinguished career as an author, particularly of political biographies, including those of Sir Charles Dilke (1958), Asquith (1964), Gladstone (1995) and Churchill (2001), as well as his own autobiography A Life At The Centre (1991). Labelled the ‘last of the whigs’, he also led an active social life, was a prolific and well-regarded speechmaker, and held positions on numerous boards and committees, not least as President of the Royal Society of Literature.

Jenkins’ archive reflects his working life as a politician in the UK and in Europe, as an author and journalist, and as Chancellor of the University of Oxford. Important sources which are now available to researchers include not only Jenkins’ own detailed daily appointment diaries – which, if you can read the handwriting, make it possible to find out where he was (and who he was dining with) at just about any given moment – but also the diaries of his father, Arthur Jenkins. 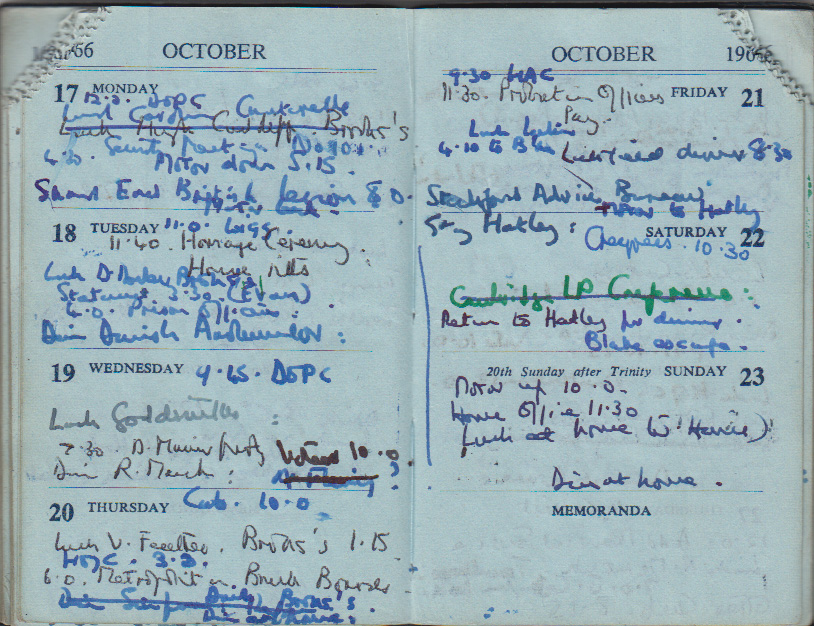 Jenkins’ engagement diary entries 17-23 October 1966. Jenkins was Home Secretary when the double agent George Blake escaped prison on 22 October, which is noted in the diary. 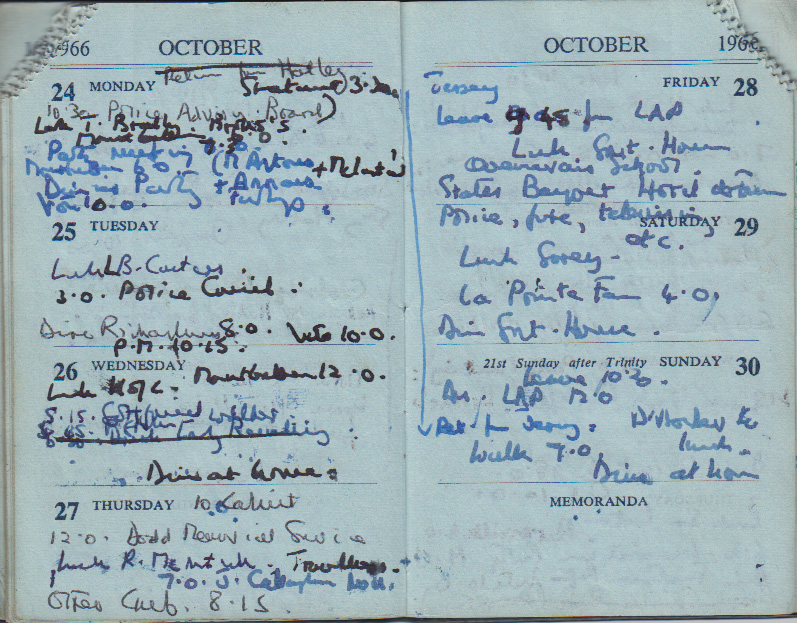 Also available are 59 boxes of Jenkins’ meticulously ordered speech notes; his literary papers, including the drafts of many of his books and his journalism; and a rich collection of personal ephemera, including three boxes of orders of service for funerals, weddings and other commemorations which comprise a “Who’s Who” of British public life in the twentieth century. The archive also includes numerous photographs, including multiple boxes of press photos from Jenkins’ stint as President of the European Commission.

The archive is a rich one, and will be invaluable for students of modern British and European politics, political life, and the social history of the twentieth century generally.