“The surroundings, the smell of old leather books and old wood, Dr Chapman in his gown, the audience, the clock chiming gently in the background, the sun shining through the old glass, the blue sky, and the Radcliffe Camera just visible through the windows….”
Just one impression from Oxford’s medical alumni of the celebration on Saturday of the centenary of the presentation of a clock to the Bodleian’s Duke Humfrey’s Library by Sir William Osler, Regius Professor of Medicine 1905-19. The event, a joint venture between the Saving Oxford Medicine team and Oxford Medical Alumni, timed to coincide with the Alumni Annual Spring Meeting, proved highly popular. Dr Allan Chapman of Wadham College, historian of science and medicine, spoke about ‘Oxford and the Mind’. He drew intriguing parallels between the brain and clock mechanisms and offered a fascinating account of the diagnosis and treatment of psychological disorders over the centuries, with links to work done in Oxford. Sarah Thomas, Bodley’s Librarian, then spoke about Osler’s contribution to the Library, as a Curator and as adviser to two of her predecessors, EWB Nicholson, Bodley’s Librarian 1882-1912, and Falconer Madan, who succeeded him. Osler, physician and bibliophile, was a key figure in matters ranging from fundraising for the repurchase of the First Folio of Shakespeare in 1906 to the construction of the underground stack, which was opened in 1912. So, after a hundred years and full conservation by staff at West Dean College, Chichester, the clock has been rededicated. For more information about the clock, see our post of 30 June 2011.

The photograph above appeared in Harvey Cushing’s William Osler, The Man, in Annals of Medical History in 1919. It shows Osler in the Bodleian Library in 1909 with a copy of Andreas Vesalius’ Tabulae Anatomicae of 1538.
Special thanks to the Osler Club of London for their support for the event and to the conservators, Su Fullwood and Matthew Read. We are also grateful to Professor Terence Ryan of Green College and Oxford Medical Alumni, and Professor Mark Gardiner of the Osler Club of London for their inspiration. 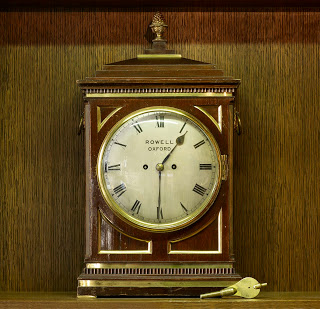