There is a great deal of focus on the lives and work of the officers of Her Majesty’s Overseas Civil Service and civil contractors working abroad. Here at the Bodleian in our Commonwealth and African collections researchers often consult our many official and personal papers including those of the Overseas Service Pensioners’ Association.

But what about the wives and children that came with them? They had to deal with living in a foreign country with different customs, languages and climates. Many of them, at least initially, had no work routine to settle into or familiar faces to rely on.

Think for a minute of the thousand little things in your everyday life that you take for granted. Dealing with them in another land—even in a large metropolitan city (which many of them were not posted to)—could be confusing enough. For those who moved to a provincial outpost or a small island it was even more of a culture shock. 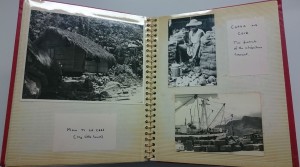 Photo of a WCS member’s house and from her daily life in the Seychelles.

Take something as basic as buying common household goods: Where do you find needle and thread? Do they even have oats here? Can you buy beef? Often you needed to find a local substitute and even if they were available it might be packaged different, you might be looking in the wrong shop or you can’t find the words to describe something that seems so obvious to you. This could end up being an exercise in frustration where you found yourself wandering aimlessly for hours and returning empty handed.

Most people will not have heard of it, but to the emigrating Englishwoman it was a lifeline. They gave courses on food, childcare, and health as well as providing a support network for the wives and families of those who were working abroad. It could be a lonely life with the husband away at work all day and lot of leisure time on your hands. 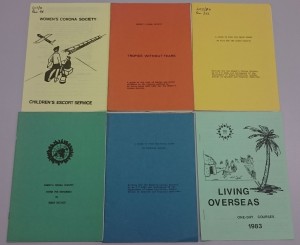 A selection of leaflets for the various courses on offer to their members.

The WCS provided courses to educate the new arrival on living overseas, charities to be volunteers in, visits and outings to familiarise them with the local area and people, social gatherings to relax and meet others in the society etc. 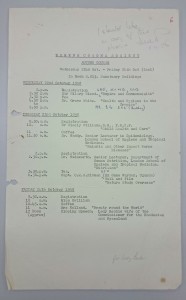 A schedule of autumn courses shows the range of topics covered from the practical to the educational with doctors, officials and other experts speaking on ‘Malaria and Other Insects Borne Diseases’ to ‘Nature Studies Overseas’ to ‘Beauty round the World’.

One of the WCS members paints an evocative picture of what a prospective newcomer could expect upon arrival.

‘Often, on arrival, a family may live for a while in a hotel – and this can sometimes be a lonely start for a wife whose husband is out at work all day and she knows no one to talk to.’

And for ‘families who go straight into their own homes, the facilities of the Corona “Survival Basket” are often very welcome until their own luggage arrives.’ 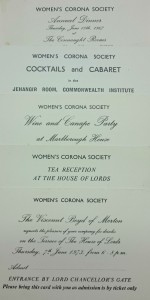 A selection of invitations for London members.

It was not just with the practical aspects of living overseas that WCS helped with. One of the most important things they provided was a social network.

This was fostered by theatre parties, afternoon teas, and charity events.

It wasn’t only a resource and a society for when you were abroad though. They also had a thriving social scene around their London headquarters; as shown by the selection of invitations to the right.

Whether their husbands’ tours of duty were done and they had to reintegrate to British life, or they were Commonwealth citizens moving to the UK for the first time, the WCS was equally there to help them find their feet as well.

Sometimes for returning expats the UK was the most foreign land of all when your friends, family and life had moved on without you.