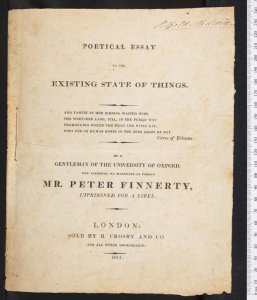 Yesterday, in a ceremony at the Weston Library, Bodley’s Librarian Richard Ovenden announced the Bodleian’s latest acquisition and its 12 millionth printed book: a formerly lost pamphlet containing a “poetical essay” by an 18-year-old Percy Bysshe Shelley (described on the pamphlet’s title page only as “a gentleman of the University of Oxford”). The pamphlet was printed in Oxford in 1811, rediscovered in 2006, and recently donated to the Bodleian by Mr Brian Fenwick-Smith.

As challenging as it has been to digitize such a recent acquisition, which even yesterday was still in the process of being catalogued, we are proud to have been involved in this event, and pleased that this remarkable addition to the Bodleian’s collection is being shared with web users worldwide.