Wikidata is a very rapidly developing topic, and month by month it is becoming a more mainstream part of how library and other cultural data are curated and accessed. This is a round-up of some recent activities and publications. 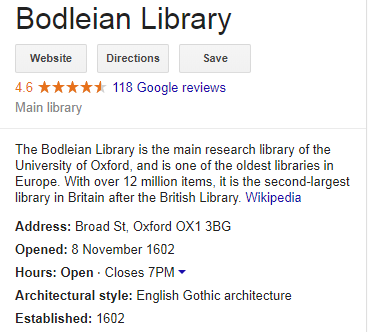 A book published by the American Library Association has a chapter titled “Wikipedia and Wikidata Help Search Engines Understand Your Organization” (open access link). The focus is on Knowledge Graph Cards: those boxes of key facts that appear in Google and other search engine results. The presence of these cards is a sign that the search engine recognises the distinct identity of the item and knows some of its properties.

“[V]erifiable facts are more likely to be harvested from proprietary knowledge bases such as Google My Business, and from knowledge bases on the Linked Open Data (LOD) cloud, such as Wikipedia and Wikidata. Academic organizations have the best chance of controlling their Semantic Web Identity by proactively creating and curating records in these knowledge bases.”

The authors, at Montana State University, undertook a systematic improvement of the semantic web representation of parts of the university. They were able to demonstrate that targeted units of the university (the library, the business school, and so on) now have much better search engine placement.

A consortium of 16 American libraries, including the universities of Harvard, Yale, Princeton and the Smithsonian Library, are building a linked data prototype using Wikidata, to pioneer new cataloguing workflows for creating rich data about works, their editions and their authors. They have their own installation of Wikibase, the free software platform that underlies Wikidata.

This work is done under the auspices of OCLC’s effort to promote the integration of library data with other information systems, in particular to use the things that works are about to create pathways driving readers to those works:

“our most important data can be re-engineered from databases of records comprehensible only to libraries to more broadly understandable collections of facts about entities, or culturally important people, places, organizations, events, and concepts. […] As linked data, library data had to be re-imagined as collections of Things, not Strings.” 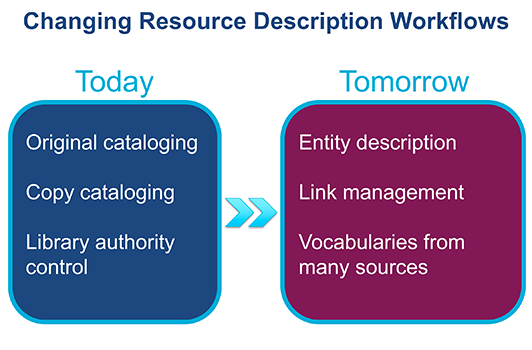 OCLC maintain WorldCat, and one of the outcomes of their linked data work is more accurate data about editions and translations:

“We are merging descriptions of translated works with corresponding Wikidata descriptions to obtain the language and script of the original work, the source and target languages, and the names of translators.”

Europeana has long advocated that contributing institutions use Wikidata to enrich their records, in particular “as a pivot to access links to more specialised vocabularies”, and Wikidata was a main theme of the recent EuropeanaTech conference, where participants learned about how it provides an easy way in to creating and querying Linked Open Data.

The NLW have recently described nearly 5,000 portraits of the Welsh Portrait Collection in Wikidata, allowing them to create queries and visualisations, e.g for the most depicted people. One benefit is proper authority control:

“For the first time we can properly disambiguate (untangle) the names of the artists and sitters in order to better understand the makeup of the collection. For example 12 different individuals named John Jones have been identified in the collection […] and many are now connected via Wikidata to Wikipedia articles or Dictionary of Welsh Biography entries.”

The Museum of Modern Art (MoMA) in New York and the National Galleries of Scotland (NGS) are both reconciling artist records with Wikidata so as to draw in biographical text extracts from Wikipedia and links from the Getty Union List of Artist Names (ULAN). Although importing Wikipedia extracts into their web site was a controversial step, MoMA cited improved detail, active updating, broad coverage and links to further information about the artist as benefits.

NGS point to the prohibitive amount of work needed to write and check biographies for 15,000 artists, versus the immediacy of drawing them in “through the magic of Linked Open Data”.

A recent paper describes a project at Laurentian University, drawing in details from Wikidata to create “infocards” for music artists in the library catalogue. These show a freely-licensed photograph, short description and identifier links such as VIAF. This is part of a strategy to use Wikidata as a platform for Linked Open Data to which library staff and the wider public can both contribute.

A new project page reports on my own work sharing University of Oxford cultural data on Wikidata.