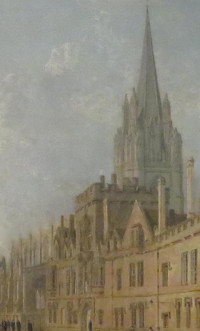 The International Image Interoperability Framework (IIIF) is a standard, developed by a consortium including the Bodleian Libraries, that allows images and associated metadata to be shared across the web. It’s used by many sites including Digital Bodleian and Wikimedia’s image server, Wikimedia Commons.

As of November this year, Wikidata can point to the IIIF manifests associated with a digitised object (example near the foot of this page). However, the opportunity of Wikidata and IIIF is not just about discoverability of the IIIF data itself. Included in IIIF is the ability to address a specific rectangular region of an image with a URL. Wikidata can use this to express statements about part of an image

Anyone familiar with Turner’s “High Street, Oxford” will recognise several landmarks included in the scene. In this sense, there is a lot of structure in the image that is obvious to humans but not naturally captured in the painting’s digital representation (image + catalogue record). My mission, should I choose to accept it, is to express in open data not just that the painting depicts the Church of St. Mary the Virgin but that a specific part of the image depicts the church. END_OF_DOCUMENT_TOKEN_TO_BE_REPLACED