For March, the EFL has on display texts which engage with the mythic past of Ireland through writing about fairy and folk tales. These narratives have arisen from Irish cultural traditions and shape thoughts about national identity.

Ireland has a long cultural tradition of engaging with the mythical past, folklore and fairies through the creation of narratives and stories. Tales would have been passed around when people gathered together to share stories. It was very much an oral narrative tradition.

Within the mythological narratives there is often a focus on romantic heroes and ruthless gods, reminiscent of Norse and Greek mythology. James Stephens (1880-1950) focused on retelling these narratives. His Irish Fairly Tales (1924) focuses on the heroic figure Fionn mac Cumhaill, a legendary mythical hunter, and the challenges he and his followers must overcome. This is often referred to as the Fenian Cycle of myths. The edition is accompanied with illustrations by Arthur Rackham which bring the narrative to life. 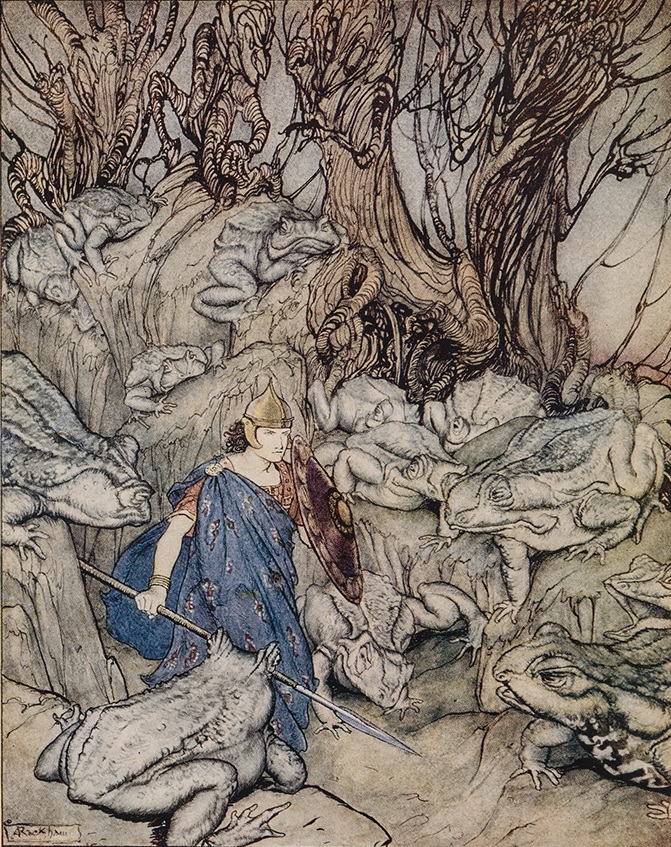 In the nineteenth century there is a strong interest in Irish fairy tales from Irish writers.  Through exploring mythological and fantastical topics writers were able to connect with their cultural routes when their own nationality was becoming more complex, and with the advances in modernity and technology. Thomas Crofton Crocker (1798-1854) was an Irish antiquary who was especially interested in and devoted to the study of ancient Irish poetry and folklore. His first volume of Fairy Legends and Traditions of the South of Ireland (1834) went to six editions, and was translated by the Brothers Grimm into German.

Yeats (1865-1939) was also able to connect with his heritage through writing about Irish folklore and fairy tales. In his early career he produced many collected works of fairy tales. He spent fourteen years of his early life in London and through these works he was able to reaffirm his Irish nationality.  His collections Fairy and Folk Tales of the Irish Peasantry (1888) and Irish Fairy Tales (1892), draw upon a range of sources to illustrate fairies including the trooping fairies, changelings, solitary fairies, ghosts and witches.

Jane Wilde (1821-1896) also saw mythology as important for Irish culture. In the preface to her collection Ancient Legends of Ireland (1887), she writes: ‘…the legends have a peculiar and special value as coming direct from the national heart ’. Her tales explore a variety of Irish myths and legends from earlier generations.

Alfred Graves (1846-1931) was a poet and writer, and father to Robert Graves. He was president of the Irish Literary Society for several years. In The Irish Fairy Book (1910) a variety of narratives and poems are brought together from writers who were also drawn to the subject matter of fairies and folklore including Jane Wilde and Tennyson. In the Spectator for his obituary it was written: ‘Mr Graves not only wrote songs but stirred up fresh public interest in the old folk-songs of Ireland, Wales and the Highlands, and, moreover, induced musicians and singers to become interested too’.