Niva was a popular journal of late 19th-century Russia.

Niva an illustrated weekly journal of literature, politics and modern life, was published from 1870 to 1918 in St. Petersburg, before being shut down by the Bolsheviks after the Russian revolution. The journal was widely read by an audience that extended from primary schoolteachers, rural parish priests, and the urban middle class to the gentry. It was especially popular among the middle class in the Russian provinces. Niva contained large coloured prints of art by famous Russian artists, works of famous Russian authors, as well as articles on science, politics and culture. It also had a special children’s section as well as a section on Russian classical writers: Gogol, Lermontov, Goncharov, Dostoevsky, Chekhov and many others. The Taylorian has only a few issues of Niva in our holdings (stored offsite).

Please send any feedback on the trials to nick.hearn@bodleian.ox.ac.uk. 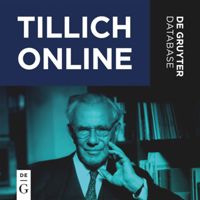 Tillich Online is the first bilingual database to make the entire work of the important German-American theologian Paul Tillich (1886–1965) electronically accessible. In addition to Tillich’s extensive German-language oeuvre, users can access original English material authored by Tillich, as well as translations from the German, which are gradually being added to the database.

We have trial access to China and the Modern World: Records of the Maritime Customs Service of China, 1854–1949 via Gale until 30 November 2021.

China and the Modern World: Records of the Maritime Customs Service of China, 1854–1949 provides an excellent primary source collection, mainly in English, for the study of China and its relations with the Imperial West in the late Qing and Republican periods. The records included in this collection– official correspondence, despatches, reports, memoranda, and private and confidential letters– constitute invaluable and often unique evidence of Chinese life, the economy and politics through the Taiping Rebellion, the Boxer Rebellion, the Revolution of 1911, the May 30 Movement, the two Sino-Japanese Wars, and the Chinese Civil War.

Please send any feedback to Mamtimyn.Sunuodula@bodleian.ox.ac.uk.

We are trialling three Russian databases from East View until Monday 15th November.

Important pre-revolutionary Russian historical and literary journal. Russkii arkhiv was an influential monthly historical and literary journal published in Moscow from 1863 to 1917 (published bimonthly from 1880-1884) and of which the Taylorian holds a complete set of printed volumes. It presents a picture of Russian cultural and political history during the late 18th and early 19th centuries mainly focusing on the Russian nobility. Documents include hitherto unpublished memoirs, material on the life and works of literary figures such as Alexander Pushkin, letters and diaries of prominent historical figures. We have a printed index to the journal in the library but searching will be greatly facilitated by using this electronic version.

The first Russian-language newspaper in the Caucasus. The newspaper Kavkaz was published between 1846 and 1918. It had two main purposes: to promote Russian culture and influence in the Caucasus and to acquaint the Russian public with the way of life and culture of the peoples of the Caucasus. In its pages can be found official documents of the Russian empire as well as the writings of members of the local intelligentsia on historical, cultural and archaeological topics. Partial holdings at the BL – otherwise not held by any UK Library.

An important source for information on Soviet life and culture and current affairs. Ogonek is one of the oldest weekly magazines in Russia having been in continuous publication since 1923. Our holdings at the Taylorian are unfortunately incomplete and not easy to access. This digitized version should make this key publication much more accessible.

The trials are taking place in Weeks 2-5 from Monday 18th October until Monday 15th November. Any feedback to Nick Hearn.