Details of the next Oxford Bibliographical Society lecture

Lecture: The Book of Common Prayer and the History of the Book – Brian Cummings 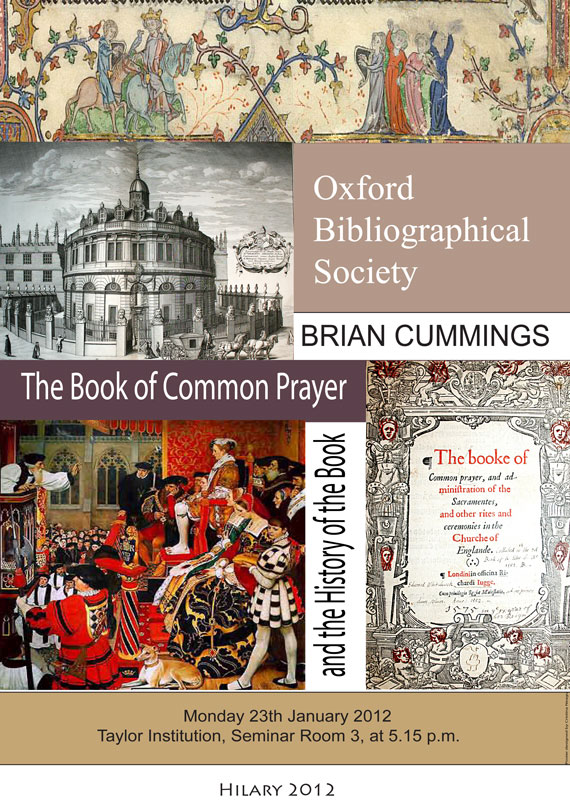 Brian Cummings  is currently Professor of English at the University of Sussex. He specialises in many aspects of early modern English literature, especially More, Wyatt, Shakespeare, Donne, and Milton. He also works on the history of the Reformation, the history of theology and of heresy, the English Bible and the Book of Common Prayer, medieval and Renaissance philosophy, humanism, especially Erasmus, the European Renaissance and the reception of the classics, grammar, logic and rhetoric and on literary theory and the philosophy of language. He has recently published The Book of Common Prayer: The Texts of 1549, 1559, and 1662 (Oxford University Press, 2011), a unique edition of the Book of Common Prayer that brings together the texts of three different versions – 1549, 1559, and 1662 – to provide a panorama of the history of ritual in England from the Reformation to the twentieth century. He is also the author of The Literary Culture of the Reformation: Grammar and Grace (Oxford University Press, 2002), a Times Literary Supplement Book of the Year for 2003. A paperback edition of this book appeared in July 2007. He has also published widely in journals such as English Literary Renaissance and Studies in Church History, and is a contributor to The Cambridge History of Medieval English Literature (1999) and The Oxford Companion to the Book (2010). This year Professor Cummings is guest curating an exhibition for the 350th anniversary of the BCP at Lambeth Palace Library which will run  from May to July 2012, entitled Royal Devotion: the Monarchy and the Book of Common Prayer. Later in 2012 he will be giving the Clarendon Lectures in Oxford.