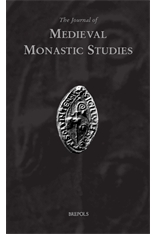 This journal focuses work on monasticism throughout medieval Europe. This peer-reviewed journal is published annually, is international and interdisciplinary in scope. The journal will include scholarly contributions on monastic history, archaeology and architectural history, art history, literature, etc, as well as relevant book reviews and shorter notices.

The 20 members of the editorial board include experts in history, archaeology, art history and theology, covering all of medieval Europe. The language of publication will be English, but abstracts in the original language of individual contributions may be included.