I am pleased to report that Oxford researchers now have access to The Grand Tour (Adam Matthew Digital). Use your SSO for remote access.

As thousands of British tourists are currently enjoying their holidays in Europe, no doubt Facebooking and Instagramming their experiences and sights, it is worth reflecting back how travel accounts used to be written and at a time when European travel was reserved to the aristocratic and wealthy young men of the eighteenth century and seen as part of their education.

The Grand Tour, a term first used by J. Gailhard, The compleat gentleman, or, Directions for the education of youth as to their breeding at home and travelling abroad (1678)*, was a phenomenon which shaped the creative and intellectual sensibilities of some of the eighteenth century’s greatest artists, writers and thinkers. Now researchers have access to digitised accounts of the English abroad in Europe c1550-1850.

The source materials in The Grand Tour highlight the influence of continental travel on British art, architecture, urban planning, literature and philosophy. They are also useful for the study of daily life in the eighteenth century, whether it be on transportation, communications, money, social norms, health, sex or food and drink. Furthermore, the material covers European political and religious life, British diplomacy; life at court, and social customs on the Continent, and is an excellent resource for the study of Europe’s urban spaces. This resource will be useful for those studying history, history of art and architecture, British and European literature. 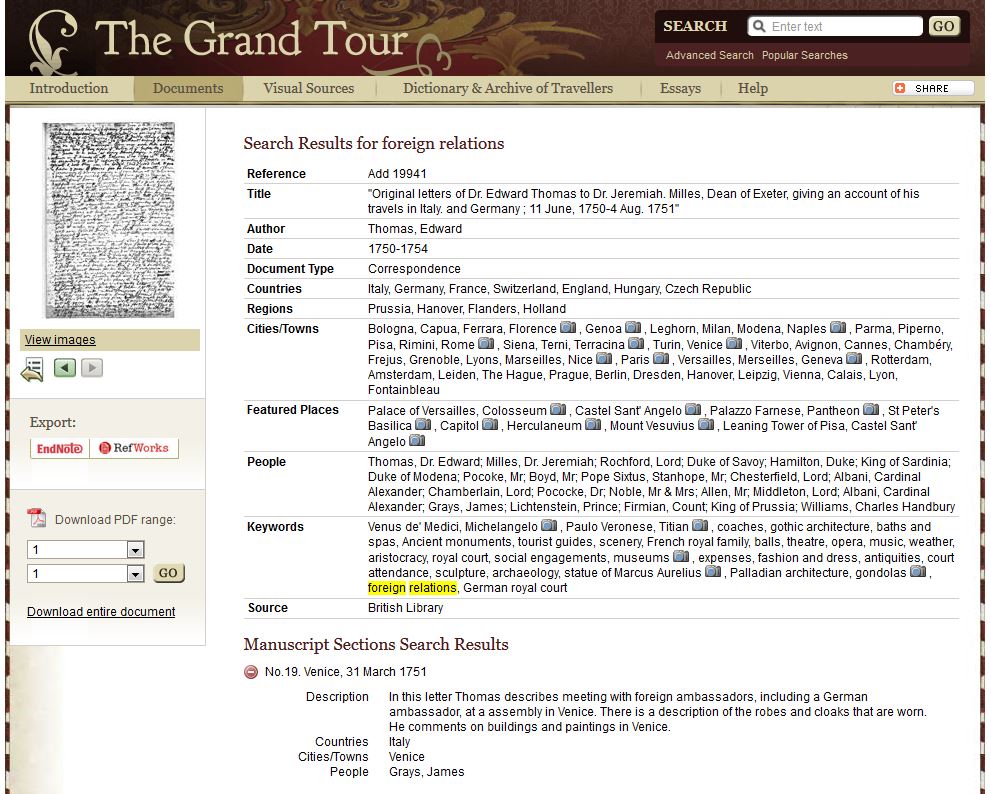 There is a wealth of detail about cities such as Paris, Rome, Florence and Geneva, including written accounts and visual representations of street life, architecture and urban planning.

The Grand Tour provides full-text access to a curated collection of manuscripts, printed works and visual resources. The materials draw on collections held in a number of libraries and archives, including many in private or neglected collections. Assembling these in a single resource will allow researchers for the first time to better compare the sources.

In particular the scanned and indexed materials include letters; diaries and journals; account books; printed guidebooks; published travel writing; but also visual resources such as paintings and sketches; architectural drawings and maps. Palaeographical skills are needed to decipher manuscript letters. Some images of scanned manuscripts are challenging to read.

Using an interactive map, researchers can also locate any sources related to a town or city:

Also included is an online version of John Ingamells (comp.), Dictionary and Archive of Travellers in Italy 1701-1800 (New Haven, 1997). This well-known publication lists over 6,000 individual Grand Tourists, provides biographical details and details of their tours.

For those needing an introductory and historiographical account of Grand Tour research, there are essays by Professors Jeremy Black, Edward Chaney and Rosemary Sweet.

Other supplementary aids include a chronology of 18th century European events, a political chronology of Italy, and a list of Italian rulers, as well as a selected bibliography for further reading.

The Grand Tour is accessible to Oxford researchers and Bodleian-registered readers via SOLO or Databases A-Z.