In honour of St Patrick’s Day celebrated not two weeks ago, I would like to use this March edition of the New Bodleian History Books blog to showcase a number of studies on Ireland and Irish history newly arrived at the library this month.

The history of the island of Ireland is a long one, from the first evidence of human habitation 12,500 years ago through the Christianisation period and St Patrick’s work on the island in the 5th century; the Viking presence from the raids in the 8th century to the Battle of Clontarf in 1014; the Norman invasion in 1169; the conquests, rebellions and religious conflicts in the early modern period; the Battle of the Boyne in 1690; the union with Great Britain in 1801; the great Famine in the mid-19th century; the Home Rule, Easter Rising and Irish War of Independence in the early 20th century; the Troubles in the late 1960s and Bloody Sunday; the Good Friday Agreement; all the way to the threat of a hard border in Ireland and the role of the DUP in Britain’s Brexit negotiations today.

Rather than attempting to provide anything like a comprehensive overview of any of these eventful eras, most of the books on Irish history that have arrived in the Bodleian this month can be seen as presenting a variety of interesting snapshots of Ireland’s long history, and its societies and cultures.

This year marks the sesquicentenary of the end of the Great Irish Famine (1845-49), and two of the volumes deal with this watershed event in the history of Ireland: The Great Irish Famine and Social Class looks at the impact of the catastrophe on Ireland’s economy (including its relations with Britain) and investigates topics such as the suffering of the rural classes, landlord-tenant and class relations, Poor Laws, and relief operations during the food crisis. A rather different approach is taken by Niamh Ann Kelly in Imaging the Great Irish Famine, which examines commemorative visual culture – memorial images, objects and locations – from that period to the early twenty-first century, linking these artefacts of historical trauma and enforced migration to the ongoing dispossession of people across the world who are driven out of their homes and countries on a wave of conflict, poverty and famine. 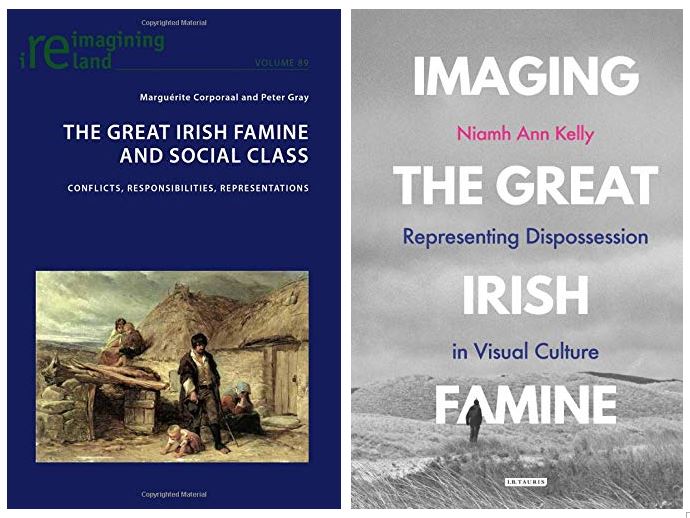 Voluntary rather than enforced emigration and travel by Irish nationals is thematised in two other new studies. In Medieval Irish Pilgrims to Santiago de Compostela Bernadette Cunningham traces the long connection between Ireland and the shrine of St James in Galicia, and tells the stories of some of the men and women who undertook the hazardous journey by land and sea between the twelfth and fifteenth centuries, drawing on sources from official documents, historical chronicles, literary texts and saints’ Lives to archaeological finds to look at the varied influences on and motivations of these pilgrims. The story of a group of 1,300 young Irish men who travelled across Europe several centuries later to defend Pope Pius IX’s Papal States on the Italian Peninsula is told by Donal P. Corcoran in The Irish Brigade in the Pope’s army 1860. The volume looks at the battles in which the Irish fought and died for the pope at Perugia, Spoleto, Castelfidardo and Ancona, as well as their imprisonment at Genoa after the defeat of the pope’s forces, and their heroes’ welcome when they were finally allowed to journey home to Ireland. 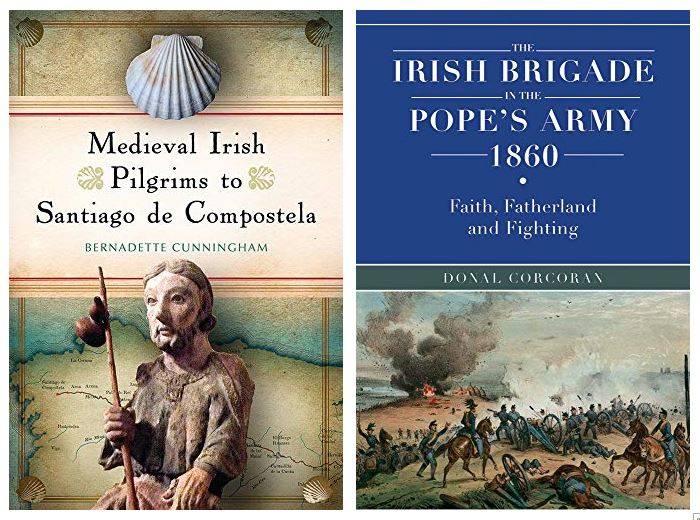 Charting the history of the diocese of Derry is Ciarán Devlin’s The Making of Medieval Derry; originally published in 2013 it is out in a new paperback edition made greatly accessible through a number of new indices. Devlin’s history of Derry is a tale of saints and sinners, of churchmen and warlords, of scholars and craftsmen, of Derry itself as sacred city, as frontier citadel, as royal capital and episcopal see. Also looking back at local history is John O’Callaghan in his volume on the role of Limerick as a key social, political and military battleground during the Irish revolution, Limerick: The Irish revolution, 1912-23. This is only one of so far eight similar volumes on these eventful years published by Four Courts Press which draw on a wide array of contemporary sources to try and draw a realistic picture of the lives of local people in Mayo, Louth, Derry, Monaghan. Waterford, Tyrone and Sligo as well as in Limerick during this time. 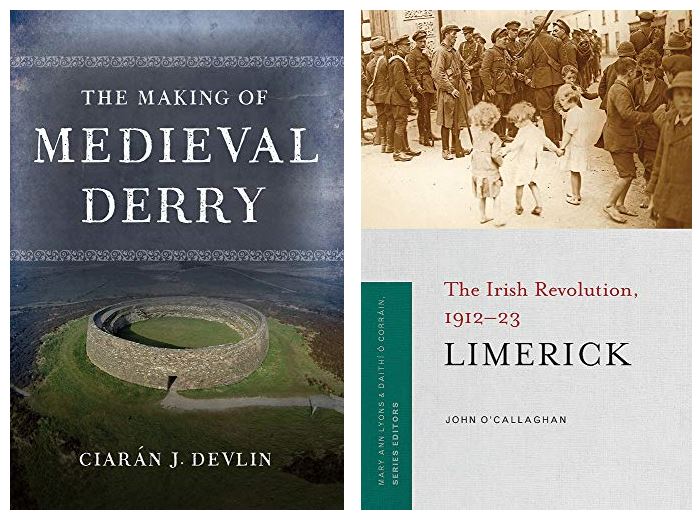 The long and varied relationship between religion and landscape in Ireland during the dawn of Christianity, the Middle Ages and the post-medieval era is discussed in Church and Settlement in Ireland, with twelve individual essays on how, over the centuries, the church formed a core component of settlement and played a significant role in the creation of distinct cultural landscapes in Ireland. For the 20th century, Emer Crooke takes a look the same topic of residence and buildings on the island with his book White Elephants, which discusses the country house and the state in post-independence Ireland from 1922 to 1973. Not regarded as an integral part of the national heritage, but rather symbols of British oppression, hundreds of former landlords’ residences were sold on, demolished or simply abandoned to ruin in these decades, with politicians torn between conserving them, or burying them and the past they represented. 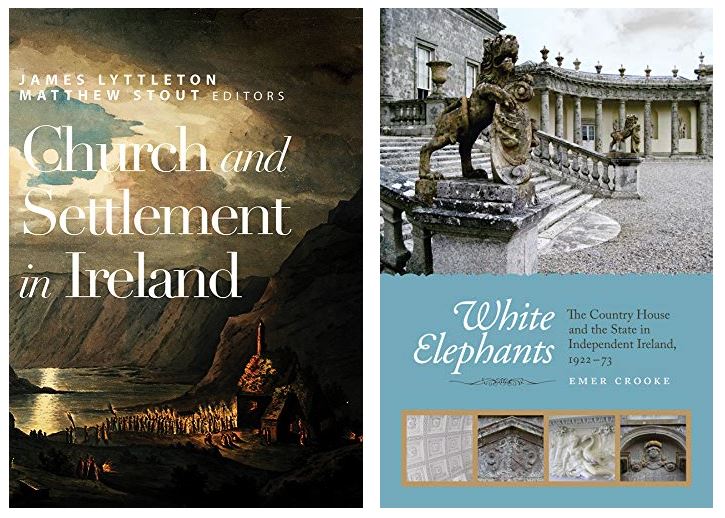 Ireland in the Press

Finally, historians and journalists celebrate the character, role, culture and history of the Irish Sunday newspaper over the course of the last century in The Sunday papers: a history of Ireland’s weekly press, with chapters, with individual chapters each examining a particular paper, from long-running, prestigious publications like the Sunday Independent or the Sunday Times to papers such as the Sunday Freeman which only ran in the years 1913–16. The chapters examine the Ireland in which these papers first appeared, their origins, proprietors, editors, journalists and contributors, their major stories and controversies, business dynamic, circulation and readership, and assess their overall contribution to Irish journalism, society and culture. 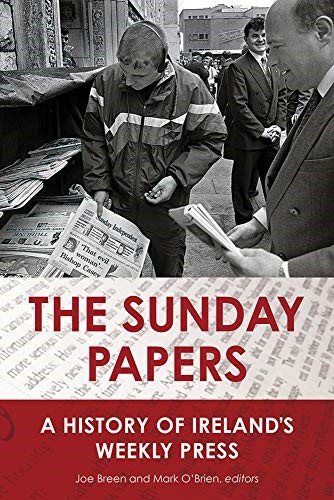 You can find all our books tagged with “Ireland” on LibraryThing here.