We live in the age of  “post-truth”, of “alternative facts” and the “war on science”, in which all manner of scientific knowledge is questioned, experts are doubted, and denialism is rife. Online platforms provide sources of information which fuel the beliefs of climate change deniers, anti-vaxxers and flat-earthers, and fill the proponents of pseudosciences such as astrology or alternative medicines with distrust in established institutions, authority and experts.

Faced with a present like this, it can be rather reassuring to take a look back at the long history of science and the development of science and scientific thought from its beginnings through to today, if only to see for yourself the uncontrovertible evidence of how science and scientific innovations and inventions have shaped the course of human history and influenced human society as it is today – whether you believe with Karl Popper that scientific knowledge is progressive and cumulative, or with Thomas Kuhn that scientific knowledge moves through paradigm shifts.

Science itself (if we define it as “the knowledge of natural regularities that is subjected to some degree of sceptical rigour and explained by rational causes”) is rather older than the invention of writing, so the long history of science begins with non-verbal evidence of “scientific” thought – neolithic structures showing astronomical alignments such as Stonehenge are an obvious example of this, or archaeological evidence for the extraction of copper and tin and later iron from metal ore which led to the Bronze and Iron Ages. But although modern “science” as such really only dates back to the scientific revolution of 16th- and 17th-century Europe, the astronomers, alchemists and natural philosophers of the Ancient world, Antiquity and the Middle Ages usually receive their well-deserved credit from historians of science for playing their important part in the accumulation of human knowledge of the natural world.

The recently arrived new Bodleian books in the subject area of history of science thus not only span an impressive number of centuries, they also illustrate the diversity of smaller fields which fall under the greater umbrella term of “history of science”: there are volumes that chart the history of a particular branch or discipline, studies with a more social focus that document the influence of scientific discoveries or technological inventions on human society, and also biographies that celebrate the lives of individual influential scientists.

Three of the volumes I would like to highlight in this month’s blog are traditional “histories” of scientific disciplines. Danilo Capecchi’s The Problem of the Motion of Bodies offers a history of mechanics which presents both a synchronic analysis of individual historic periods from Antiquity through the Middle Ages and Renaissance to Modernity, as well as a diachronic discussion which makes comparisons between different periods, looking at the what inspired humans to attempt to gain insight into the mechanisms of motion. Also charting the developments of a single discipline is Edouard Mehl’s Le temps des astronomes, his discussion of astronomy in the early modern world as a method of calculating celestial movements of the future and the past, as well as its modern understanding in which this definition quickly became insufficient, inadequate, and finally obsolete. Finally, Jost Weyer’s first volume of a projected two-volume series on the history of chemistry covers first early forms of chemistry from the Greco-Roman world to the Latin Middle Ages via Mesopotamia, Egypt, the Arab world, China and India, and then moves to a description of its development into an actual science during the early modern age from the 16th to the 18th century. In its aim to show not only how chemistry changed over the course of world history, but also how chemistry itself changed world history, it would also rather neatly fit into this following second batch of books.

Science and the World

In Un trésor scientifique redécouvert Dominique Bernard introduces a collection of over a thousand scientific instruments from the mid-19th to the turn of the 20th century preserved at the University of Rennes in Brittany. Many of these were invented by or belonged such great names among scientists as Leon Foucault of the famous pendulum, the nobel prize laureates Pierre and Marie Curie, or Pierre Weiss and his electromagnets, and the volume emphasises both the historical and educational interest in these, looking at the sometimes very “modern” concepts that influenced their design. Audra J. Wolfe’s Freedom’s laboratory also focuses on the role of science and scientists in a particular historic era, namely the Cold War, where US propaganda promoted a vision of American science with an emphasis on “scientific freedom” and a “US ideology” conceived as opposed to Communist science. The continued hold of Cold War thinking on ideas about science and politics in the United States is demonstrated in following this thought through to the present day with a discussion of the recent March for Science and the prospects for science and science diplomacy in the Trump era. How specifically scientific inventions rather than scientific thought influenced the 20th and 21st century world we live in is the subject of David Segal’s aptly named One hundred patents that shaped the modern world, charting the huge impacts, many unexpected, of new inventions on multiple spheres of our lives, and placing inventions into historical perspective – from everyday items such as tarmac, aspirin, liquid crystals, ring-pulls of soft drink cans and barbed wire to history-changing ones such as Morse code, television, transistors, diodes, and gene editing.

Men and Women of Science 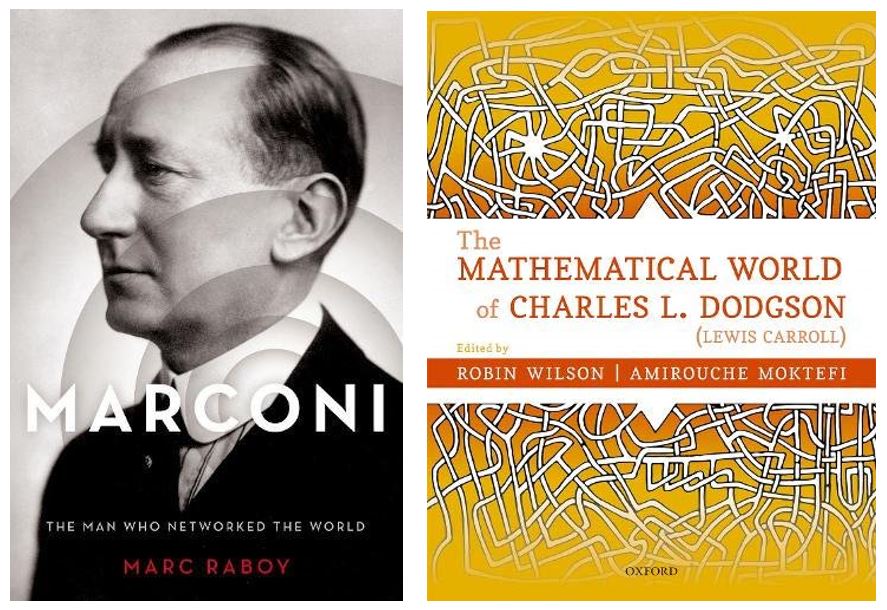 Marc Raboy’s biography of Guglielmo Marconi could, again, just as easily be listed with the above two volumes – it charts the life and doings of the man whose invention and patent of radio waves and establishment of stations and transmitters around the world made global communications wireless, and whose impact on modern society and life can hardly be overstated. Generally rather better known that Marconi, though not in his profession as a scientist, is the subject of a second biographical study: Charles Lutwidge Dodgson, the Lewis Carroll of Alice’s Adventures in Wonderland fame, was a lecturer in Mathematics at Christ Church, Oxford, and Amirouche Moktefi’s book on his “mathematical world” for the first time collects the materials on his mathematical achievements, including personal letters and drawings, in a single volume which describes his writings in geometry, algebra, logic, the theory of voting, and recreational mathematics, and discusses his mathematical legacy.

You can find all our new books tagged with “History of Science” on LibraryThing here.