For millennia kings and queens, emperors and empresses, royal consorts and mistresses, and in general members of royal houses have captured the attention of historians, historiographers, biographers, anthropologists, social scientists, theologians and the common people alike – from Suetonius and De vita Caesarum to Hello! Magazine. Because the earliest roots of kingship are found in sacral power, kings have been (and occasionally still are) considered by their people to have divine ancestry, even to the point of being revered as living gods; an idea that still continued in a way into the Christian Middle Ages through the concept of the divine right of kings. Monarchy or kingship (or queenship) thus denotes not only to a form of government but also to a supposed quality of “majesty” which marks rulers and their families as exceptional, and seems to still lie at the core of the fascination with royalty found in today’s society.

Examples of monarchs can be drawn from all four corners of the world, from the pharaohs of Egypt to the kings of Babylon and Minoan Crete, the emperors of ancient China, Japan, and Byzantium, the Caesars of Rome, the kingdoms of medieval Europe, and the emirates and sultanates of North Africa, Asia, and the Middle East. Until as late as the 20th century monarchy was the most common form of government, and while most monarchs today do not wield anywhere near the power of the kings and queens of old, they are still the heads of state in 45 nations across the world in both constitutional and autocratic monarchies – so there is plenty of material not only for the royalty-hungry tabloids of today, but also for the historians who chart how kings and queens and royal families influenced the time in which they lived, and shifted the course of history.

The speculum principum as a genre of political writing has its roots in the early Middle Ages, but theories of ideal kingship, books of advice for new rulers, or collections of examples of great rulers, are a type of writing that seems almost as old as the institution of monarchy itself – and continues in some form to today with self-help books on leadership such as Covey’s The 7 habits of highly effective people (1999) or Goleman’s Primal Leadership (2002).

A new edition of the most famous example of the genre is just out by Cambridge UP in Machiavelli: The Prince with a revision of Russell Price’s acclaimed translation and a rewritten and extended introduction by Quentin Skinner, an improved timeline of key events in Machiavelli’s life, and an enlarged and fully updated bibliography. The essay collection Concepts of Ideal Rulership from Antiquity to the Renaissance (also available online), on the other hand, deliberately stays away from such classic specula as The Prince or earlier examples such as Seneca’s On Clemency, and instead examines ideas of rulership discussed in other literary genres, from Plato’s dialogues and Aristotle’s ideas on kingship to the advice of the Byzantine peasant-turned-emperor Basil I to his son Leo VI in the 9th century, and literature aimed at the later medieval Italian officials called podestà. Finally, in Autorità e consenso: regnum e monarchia nell’Europa medievale Maria Pia Alberzoni discusses the idea of or “monarchy” in the European Middle Ages as a model formulated on the examples offered by the Classical (Roman Imperial) world, but revised through reference to the Bible and other European nations, with a focus on the developments of the concept of legitimate power and its affirmation.

If rulers of single nations make their mark on history and attract the interest of the historian, the more so do the rulers of multiple nations amalgamated into an empire. 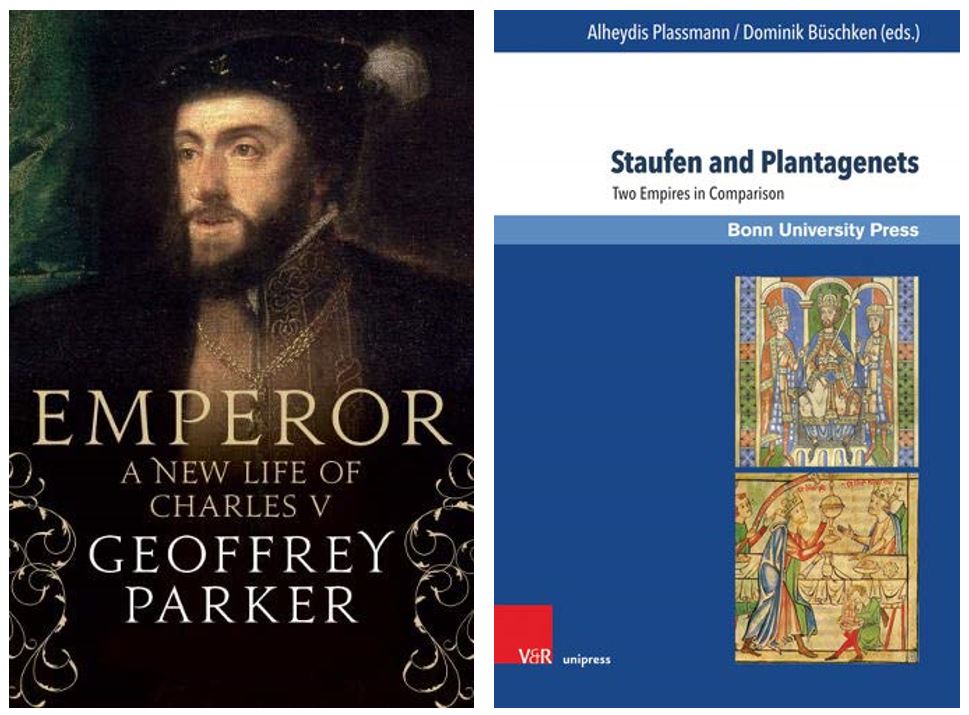 In Emperor: A New Life of Charles V Geoffrey Parker draws on new evidence for a study of the world’s first transatlantic empire with an account of the life of Emperor Charles V (1500-1558), ruler of Spain, Germany, the Netherlands, and much of Italy and Central and South America. Parker’s biography explores both political aspects in Charles’ achievements and the decisions that created and preserved his vast empire, and more intimate details of the ruler’s life for any insight into his character and inclinations. A comparison of two dynasties of near-contemporary medieval emperors is offered in an essay collection on the Staufen and Plantagenets. Contributions discuss a wide range of issues on these German and the English royal houses of the 12th century, including the images of their respective rulers on coins and seals, the ideas and ideals of kingship propagated in their narratives, the expansion of their domains by marriage, or the issue of ruling a territory that stretches across barriers like the English channel and the Alps.

Among the predominantly male monarchs throughout the ages, powerful and successful female rulers tend to stand out even more, and have been accorded rather more attention over the last half century; and although they may not nominally reign, the influence and power wielded by the wives and consorts of kings and emperors is now also being recognised.

Catherine Hanley discusses the woman who was arguably England’s first regnant queen in Matilda: Empress, Queen, Warrior. While undeniably closely tied to powerful male monarchs as daughter of the English king Henry I, wife of Holy Roman Emperor Henry V and Geoffrey of Anjou, and mother of England’s Henry II, Matilda was an impressive, powerful, and fascinating woman in her own right as an empress, the first ever female heir to the English crown, and an able military and political leader. A woman similarly in the shadow of more famous and powerful male royals around her is the subject of Conor Byrne’s monograph Katherine Howard: Henry VIII’s Slandered Queen: a woman stripped of her title of queen not 16 months after becoming the monarch’s fifth wife, and beheaded three months later at only 18 or 19 years of age. The study challenges her notorious reputation of promiscuity and accusations of adultery, attempts to redeem her as the monarch’s most defamed queen and adjust a popular opinion skewed by her representations in media. A reigning queen who very much overshadowed her own prince consort, on the other hand, is Queen Victoria (1819–1901). In her new biography The Young Victoria Deidre Murphy charts the years preceding her 63-year-long reign in a volume which includes portraits of the queen as princess, childhood diaries and sketchbooks, clothing, jewellery, and correspondence, and paints a vivid picture of Victoria’s early years through accounts of her personal relationships with famous people such as her mother, the Duchess of Kent, and Prince Albert, as well as with lesser-known figures such has her first schoolmaster, her governess, and her half-sister.

You can find more books on the subject on our online LibraryThing shelf tagged with kings and rulers, queens and royal consorts, and monarchy.