This online resource contains 99 printed works which represent the revolutionary developments in fortification in Early Modern Europe in theory and in practice.

The collection covers not only military architecture, but to some extent also the military arts (artillery, army camps, siege) and military and some naval history. While it focuses on early modern history, there are translations of works from Ancient Rome and there is at least one book on medieval military architecture (A. Hamilton Thompson, Military Architecture in England during the Middle Ages. London, 1912). A number of early modern printed books were published before 1600.

It’s possible to search the full-text of the entire collection or of individual books, but bear in mind that the collection comprises works in different languages, including Latin, and may use old language and orthography. Likewise, the rendering of the text from early modern print-type has not always been successful, so it pays to browse the books and read texts to get a sense of the content.

Many works will include illustrations of buildings, fortifications, harbours, etc. It does not appear to be possible to search for these separately. 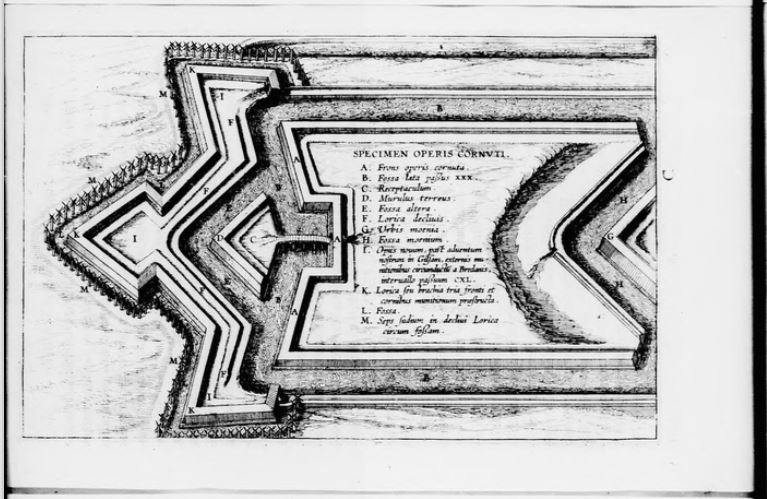 You will be able to copy the OCRed text of any selections or of a page; you can also download the ebook, or selections of it, as a zipped file; and you can share the link to the resource via email and social media.

Citations can be saved to Endnote and RefWorks, but also seem to work with Zotero.

“Similar to the arts, military architecture was split up in national schools or styles, so called fortification manners.The works of Busca, Cattaneo, De Marchi, Tensini, Theti, Zanchi, reflect the Italian School, Errard and Perret the French one and Specklin’s Architektur von Vestungen is an adaptation of the Italian school in Germany.

Stevin’s Sterctenbouwing discusses Cattaneo, Theti and Specklin to assess the benefits of their fortification systems for the Low Countries. The later French school is well represented by Pagan and the works of probably the most famous engineer of all times, Vauban. His various “fortification manners” were applied all over Europe and beyond.

While these works in Military Architecture 1600-1900 allow for a comparative analysis in text and image of European fortification schools, others focus on more local conditions such as Stevin’s works in Dutch and French on the role of pivoted sluices in the fortifications of various harbor towns.

Moreover, Military Architecture 1600-1900 provides insight in the training of fortification in theory and practice for multiple “user-groups”. While the works of the classical authors Caesar, Valturius and Vegetius were used for the philological study of the military arts at universities, the reality of warfare required for training of practical skills for engineers and landsurveyors in the field. Translations of Euclid, works on the practice of geometry and landsurveying (Mallet, Nienrode, Metius, Sems&Dou) were filling that gap. Although Military Architecture 1600-1900 represents the protagonists of the history of fortification, it also includes lesser known authors such as Bruist, Capo-Bianco, Gaya, Gerbier and Pfeffinger. Moreover, the selection does not limit itself to military architecture, but includes the military arts (artillery, army camps, siege) and history.” (Military Architecture, Leiden and Boston: Brill, 2018, accessed 8 July 2019 http://primarysources.brillonline.com/browse/military-architecture-1600-1900).

The breakdown of titles per country is as follows:

Military Architecture 1600-1900 is now accessible via SOLO or via Databases A-Z. Enjoy!