The German historian Leopold von Ranke (1795–1886) is usually hailed as the founder of modern source-based history and the originator of the idea of source criticism (Quellenkritik) in his Zur Kritik neuerer Geschichtsschreiber, a short treatise published as an appendix to his Geschichte der romanischen und germanischen Völker von 1494–1514 (1824). The form of primary historical sources can of course vary immensely, from written documents and eyewitness accounts to data recorded in interviews and fieldwork, from archaeological sites to artefacts, and from images in paintings, photographs and video recordings to audio recordings and recorded oral history. The later 20th and early 21st century have seen a veritable explosion in the amount of primary source material available in the form of electronic data, whether from internet pages, emails, blog posts, or YouTube contributions.

Ultimately primary sources are what all historiography relies on, even if it is through secondary and tertiary studies, but access to sources can be problematic. Source materials in the form of “relics” (tangible objects) may be one-of-a-kind artefacts in a museum somewhere or archaeological evidence in a remote, restricted dig. Human “narratives” (written sources) may only exists in the original documents in a foreign language kept in the basement of an archive, or in a priceless manuscript or unique handwritten letters secured in a private collection or library. Access to such primary sources is made vastly easier through the painstaking and often undervalued work of researchers who find and edit or document them, possibly translate and write a commentary on them, and then publish the results in order to make these materials available to other historians who, naturally after application of rigorous Quellenkritik, are able to use them to illuminate the past. In this month’s blog I would like to highlight some of the editions of primary source materials newly added to the Bodleian History collections.

Samu Niskanen presents a first volume of the collected Letters of Anselm, Archbishop of Canterbury (d. 1109), one of the most interesting theologians and philosophers of the 11th century. With a new edition and English translation of 148 letters from Anselm’s time at the abbey of Bec in Normandy (1060-1093), this first volume offers a fresh account of the saint’s life before becoming archbishop of Canterbury. A critical apparatus, detailed commentary, and an introduction analysing the letters’ transmission to the present day accompany the text. Of interest to political and social (rather than religious or philosophical) historians of the earlier Middle Ages is Neil Stacy’s edition of the Cartae baronum of 12th-century England, documents which detail the numbers and names of all knights on English estates held by the tenants-in-chief of Henry II in the year 1166. Bringing together all the extant cartae for the first time, as well as including evidence of cartae now lost, this edition is a key source for any scholars interested in tracing the histories of individual honors and identifying comital, baronial and knightly landholders of the time. 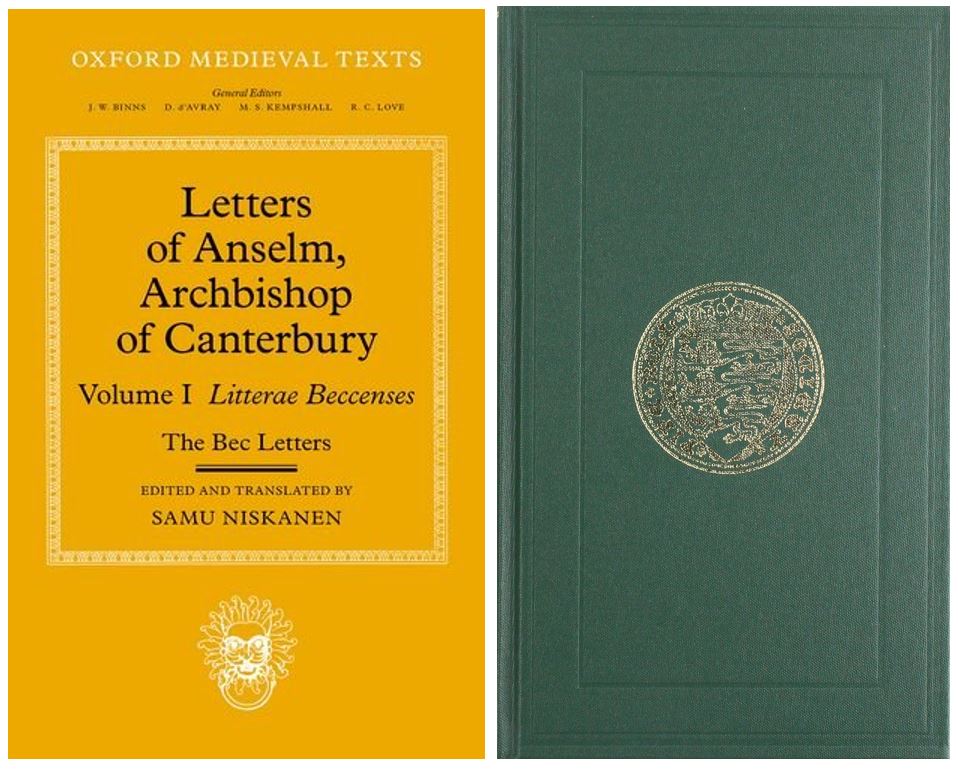 Rather more local, but also rather longer-term history is covered in two new editions (and translations) of original source material from Germany and Italy respectively. Karin Gieschen has edited the documents of one of the prominent convents of Lower Saxony in her volume on the Urkundenbuch des Augustinerchorfrauenstifts Katlenburg. Founded in 1105 in a former ducal castle, the convent attracted high numbers of female nobility from the 13th century until its secularisation in 1534. Many of its documents were lost over time through fire and sacking; the remainder, held at the regional archives since 1721, is here edited for the first time with an introduction charting the colourful history of the convent and surrounding area. A similarly fascinating detailed look at small-scale local history is offered by Gabriele Archetti and Irma Bonini Valetti with their Italian translation of the Medieval Chronicle of Giacomo Malvezzi. A doctor and humanist of the 15th century, Malvezzi compiled the history of his hometown of Brescia in Lombardy from its founding myth through Roman times to the 14th century, drawing on earlier materials such as Paul the Deacon’s History of the Langobards, and painting a colourful picture of the town through real and imaginary events and characters. This edition includes an introduction with biographical information on Malvezzi as well as a discussion of the structure, the aims and the classical and medieval sources of the chronicle. 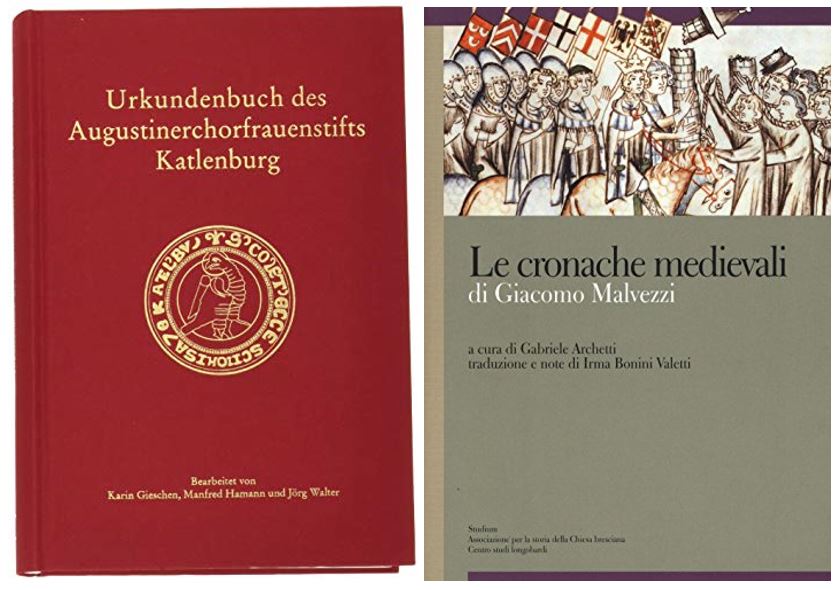 The 18th and 19th Centuries

More documents that shed light on Italian history, this time of the 18th century, are offered in Andrea Zedler’s historical-critical edition of the Italian travelogue of the Bavarian Kurprinz Karl Albrecht (later Holy Roman Emperor Karl VII) in Giro d’Italia: die Reiseberichte des bayerischen Kurprinzen Karl Albrecht (1715/16). Accompanied by a commentary, the four accounts by the Prince himself and people who travelled with him offer detailed information on the route, elaborate courtly ceremonial and expenses associated with the royal trip abroad, and help to illustrate political as well as cultural aspects of the voyage and its various destinations. Returning to great Britain, an important part of the Victorian era is made accessible in the 16th and final volume of the collected works of Florence Nightingale edited by Lynn McDonald, Florence Nightingale and Hospital Reform. The volume includes writings on her ideas on safer hospital design, location, and materials; plans for children’s, general, military, and convalescent hospitals and workhouse infirmaries; her influential Notes on Hospitals; her anonymous articles on hospital design; and her copious correspondence with architects, engineers, doctors, philanthropists, local notables, and politicians on the subject. 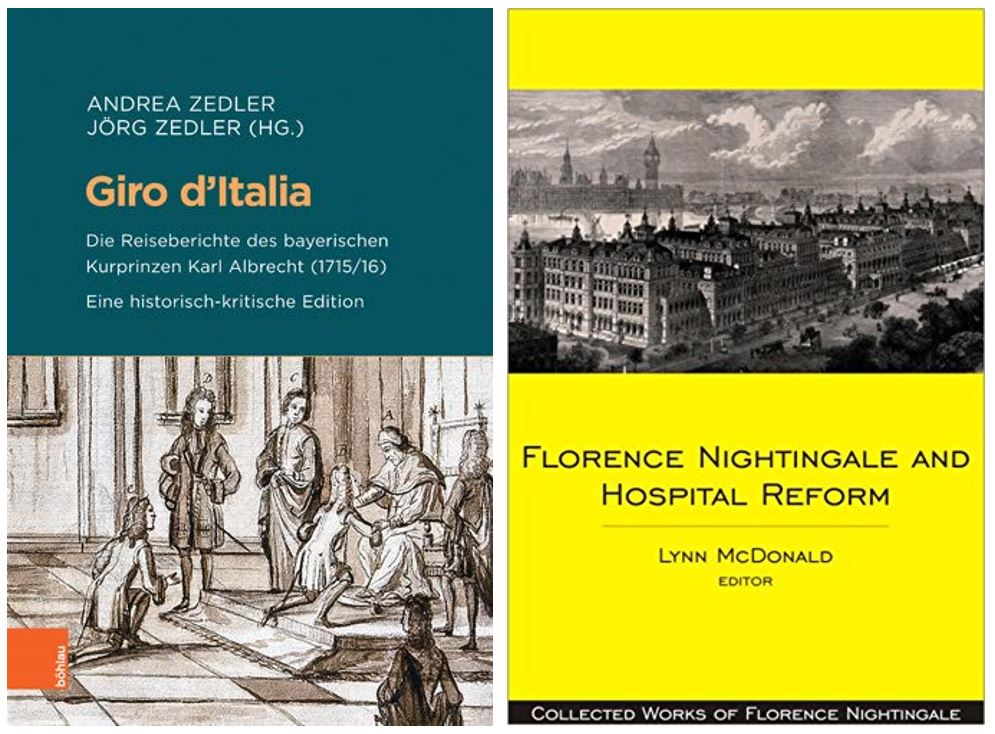 Two of the new editions of primary sources newly arrived at the Bodleian collect or examine primary sources from World War II. Somewhat controversial in its critical approach to a collection of sources often regarded as sacrosanct, Jürgen Graf presents a thorough Quellenkritik of eyewitness accounts from survivors as well as confessions from the perpetrators of the Holocaust in Auschwitz: Augenzeugenberichte und Tätergeständnisse des Holocaust. 30 Gaskammer-Zeugen kritisch geprüft. The volume offers a new edition of the primary sources themselves as well as a critical analysis on their reliability with a view to possibly misremembered or deliberately embellished or understated accounts, and their alignment with other contemporary historical documents and material evidence. More eyewitness accounts from World War II are also newly edited by David G. Roskies in Voices from the Warsaw Ghetto, a collection of reports, diaries, prose, artwork, poems, jokes, and sermons by the Jewish residents of the ghetto, which were gathered in secret and buried for safekeeping, and rather miraculously survived the devastation of the war. 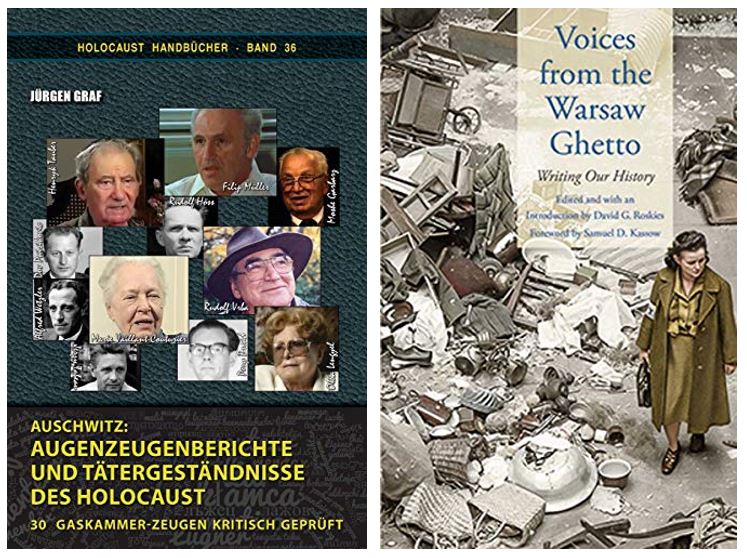 Into the 21st Century

Very current issues are the topics of the final two volumes I would like to highlight in this month’s blog. In his Making Climate Change History, Joshua P. Howe collects key documents from the scientific and political history of climate change from the 19th to the 21st century, including congressional testimony, scientific papers, newspaper editorials, court cases, and international declarations. The collected documents range from Joseph Fourier’s 1824 “General Remarks on the Temperatures of the Globe and the Planetary Spaces” through The Conservation Foundation’s Implications of Rising Carbon Dioxide Content of the Atmosphere from 1963 all the way to Pope Francis’ 2015 Laudato Si’: On Care for Our Common Home. Finally, though it is not in the first place an edition of primary sources, Ian Milligan’s History in the age of abundance? How the web is transforming historical research fits in superbly with the topic of this blog in that it discusses the issue of the enormous surge of primary source materials in our age of technology. Historians studying the last decade of the 20th and the first decades of the 21st century encounter historical records radically different from what has ever existed before, being faced with massive quantities of digital information in materials such as old and current websites, social media, blogs, photographs, and videos. In this study Milligan discusses the opportunities as well as technical and ethical challenges of these materials, outlining possible approaches, methods, and tools, and considering the wider implications of this shift to digital information for historians, their professional training and organization, and society as a whole. 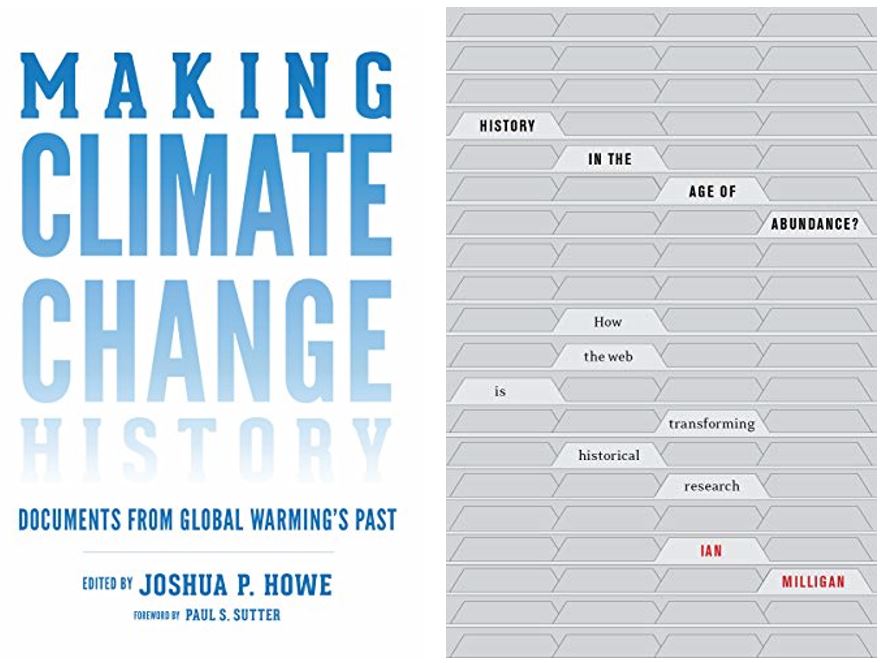 You can find more editions of primary sources available at the Bodleian here on our virtual LibraryThing shelf.