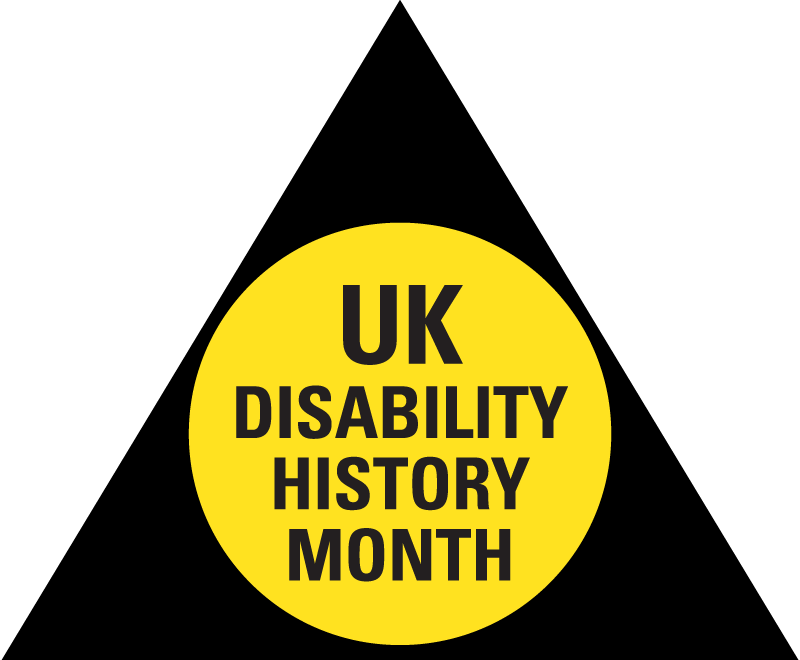 The medical treatment of disability has a long history. Yet the history of disability itself, and of disabled people, has only been acknowledged as a legitimate area of scholarship relatively recently. Disability studies began to grow towards the end of the twentieth century at a time when human rights movements were fiercely resisting the endemic societal oppression and exclusion caused by discrimination. Since then, disability studies has blossomed into a multi-disciplinary field that seeks to challenge the very notion of ‘disability’ by exploring its socio-cultural construction.

From November 22nd to December 22nd, the History Faculty Library is celebrating the diversity of its collections, authors, and readers with a book display for Disability History Month, specially curated for this year’s theme, ‘Leadership, Resistance, and Culture’. UK Disability History Month focuses on the history of the continuing struggle for equality and civil rights, and advocates the investigation of undocumented histories of those with disabilities. Our display showcases some of the most recent historical scholarship within disabilities studies, including The Oxford Handbook of Disability History (2018), which is a first port of call for anyone interested in the field. This blog post offers a quick guide to our disability history collections divided into the following themes: disabled leaders, the history of mental health and learning disabilities, attitudes to disability across British history, and finally, disability in times of war. But first, it is important to define the models that formed the foundations for disability studies.

The ‘Medical Model’ of disability focuses on what disabled people can or cannot do. The result often casts people with disabilities as a passive receivers of care or as ‘the problem’. The ‘Social Model’ directs the blame away from individuals with impairments to conclude that discrimination and the idea of ‘disability’ is constructed by the context, whether that is social, medical, economic, or cultural. Though the division between these models has been challenged in recent years, it is the Social Model that formed the basis for the academic discipline of disability studies. More information on the social and medical definitions of disability can be found here, but read on to find out what’s available in our collections. 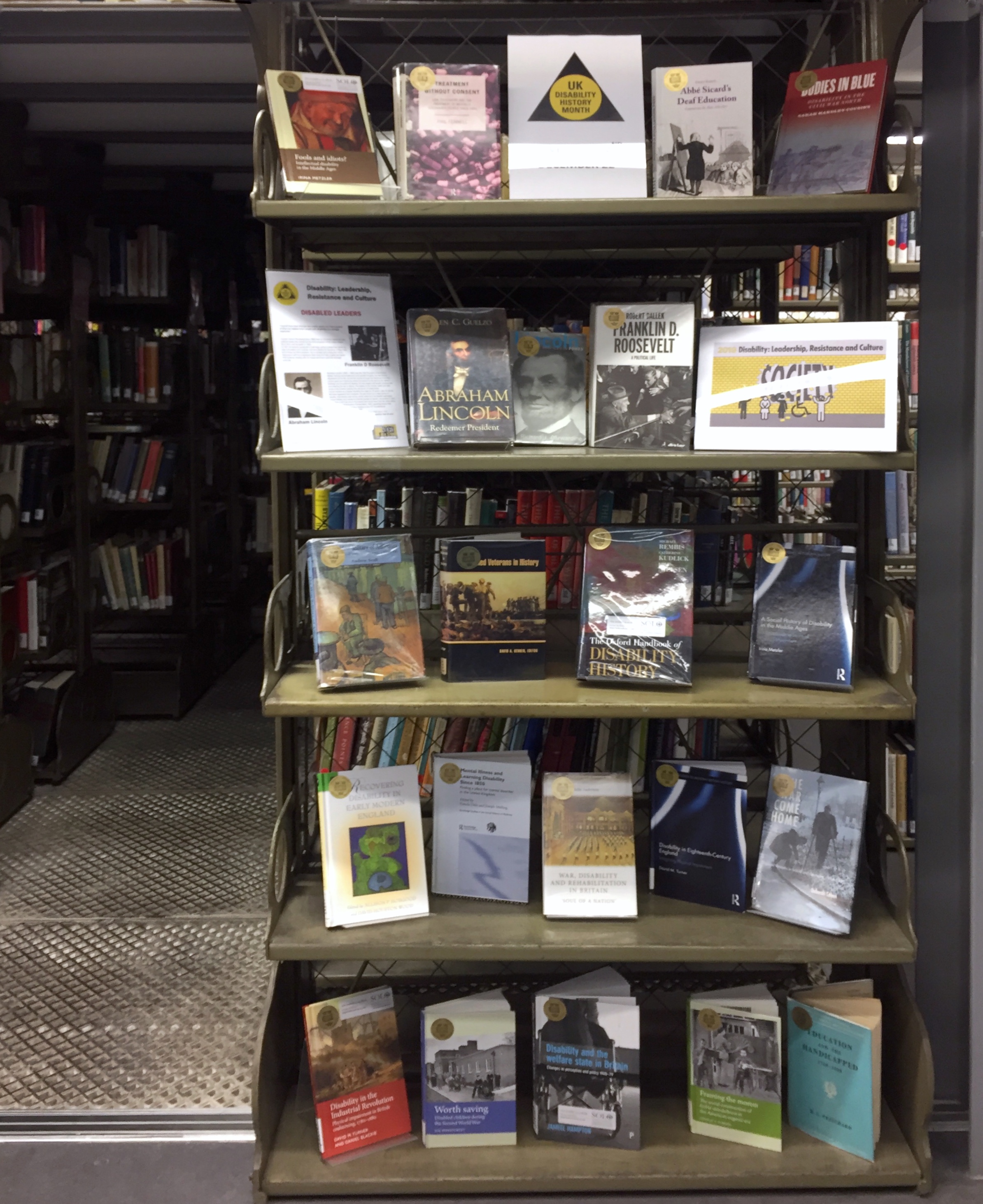 Though disability is often assumed to exist at the fringes of society, prominent historical figures like Abraham Lincoln and Franklin D. Roosevelt had disabilities that impacted their daily lives. Lincoln is thought to have suffered with clinical depression, while Roosevelt became paralysed in both legs as a result of polio. Visit our display in the Upper Gladstone Link to find out more about the lives of these two political leaders and read their biographies.

The essays collected in Mental Illness and Learning Disability Since 1850, edited by Pamela Dale and Joseph Melling (2006), explore the historical place of mental illness in Britain, whether that is in Devon’s social policy, the education system in Scotland, or in early twentieth-century hostels. Academic laywer, Phil Fennel, likewise focuses on disability history since the mid-nineteenth century in his Treatment without Consent: Law, Psychiatry and the Treatment of Mentally Disordered People Since 1845 (2015). Fennel analyses the attitudes of legislators and lawyers towards psychiatry to consider the development of mental health legislation as well as issues concerning patient consent for physical psychiatric treatments.

Sociologist Andrew Scull takes a Marxist approach to the history of care and treatment of the mentally ill in his study, The Most Solitary of Afflictions: Madness and Society in Britain, 1700-1900 (1993). Focusing on a significant shift in attitudes towards madness, Scull examines parliamentary records, books, pamphlets and other primary sources to show that at the point when the Capitalist market economy matured, there was also a significant shift in the attitude towards madness. The insane were no longer perceived to be ‘beasts’ or ‘deviants’ and were instead viewed as people with an illness that could be treated. Scull argues that the ideology of English asylum reforms nevertheless concealed the unpleasant truth that asylums, like workhouses, operated to segregate ‘disruptive’ people from society. Scull has received criticism for his depiction of the power dynamics between the mentally ill – whom he depicts as totally without agency – and the psychiatrists that treated them, who he claims merely serve the interests of market capitalism.

Wendy J. Turner aims to present an accurate picture of the social understanding and treatment of the ‘mentally ill, incompetent, and disabled’ in Medieval England in Care and Custody, (2013). Through a thorough engagement with archival sources, her research reveals that the stereotyped depictions of ‘the mad’ in medieval stories were not always reflections of the societal treatment of mentally impaired people. The book thereby eschews totalizing assumptions about those that exist within society, and those on its margins.

In Framing the Moron: The Social Construction of Feeble-Mindedness in the American Eugenic Era (2013), Gerald V. O’Brien uncovers the horrifying mistreatment of those considered to be ‘morons’ during the eugenic movement in the United States (1900-30). Drawing on original sources, O’Brien examines the fear-inducing rhetoric and pejorative metaphors that supported the involuntary sterilization and institutionalization of tens of thousands of people. 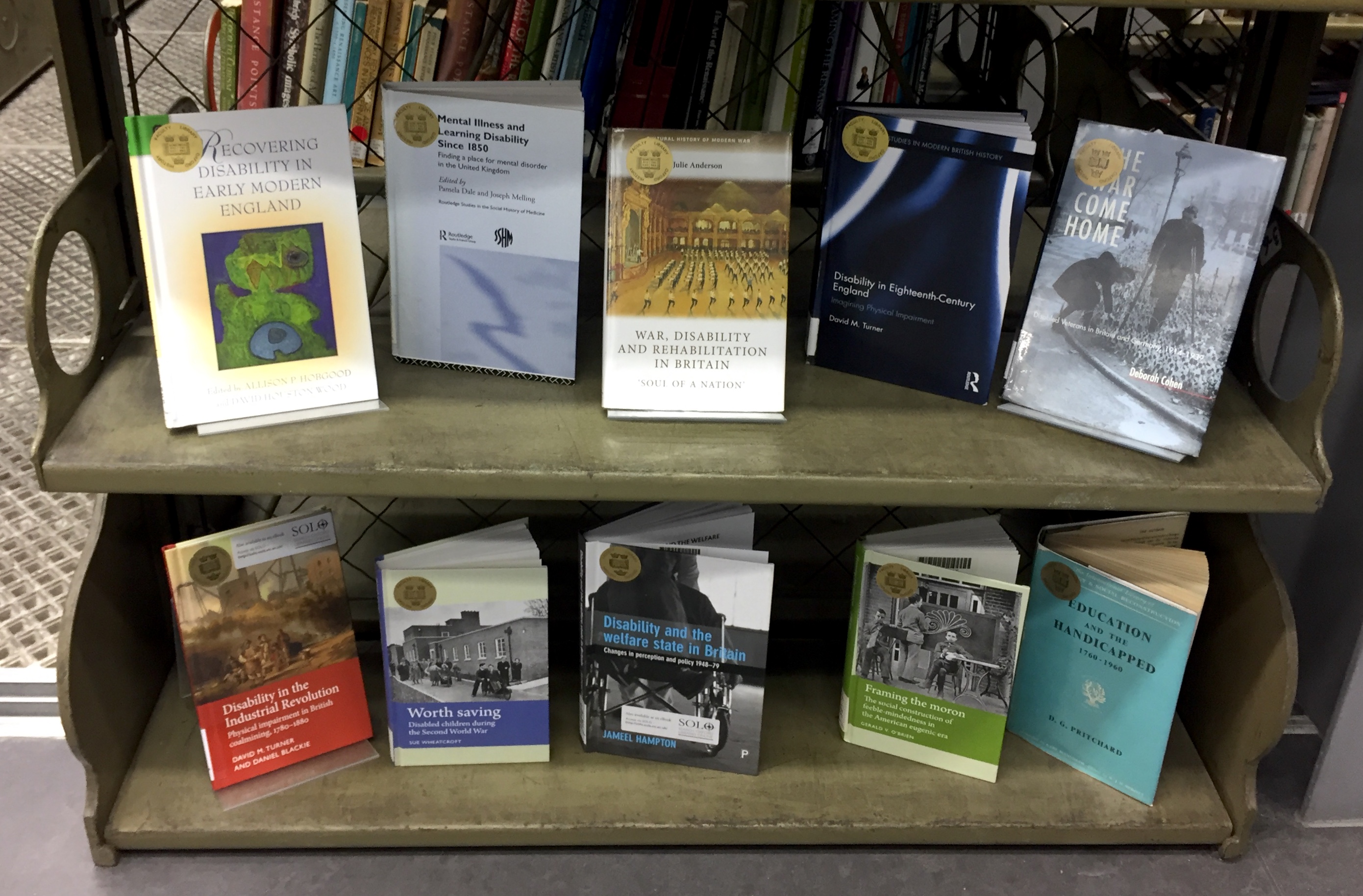 For his Disability in Eighteenth-Century England: Imagining Physical Impairment (2012), David M. Turner won the Disability History Association Outstanding Publication Prize. Turner analyses descriptions of disability and depictions of disabled people in popular culture, art, and the media to understand the relationship between religious and medical discourse. By examining neglected letters, autobiographies, and other archival documents, he also uncovers the individual histories of disabled people in this period.

Irina Metzler’s Fools and Idiots?: Intellectual Disability in the Middle Ages (2016) uses interdisciplinary approaches to examine the texts written by physicians, lawyers, and scholars that shaped medieval definitions of intellectual ability on the one hand, and disability, on the other. Metzler’s other offering on our DHM display, A Social History of Disability in the Middle Ages (2013), delves into the lived experiences of disability and aging through records of work-related injuries, compensation, and other documents across four chapters focussing on law, work, ageing, and charity.

The diverse scope of the essays in Recovering Disability in Early Modern England (2013), edited by David H. Wood, addresses the overlooked understandings of disability in sixteenth- and seventeen-century England by examining texts across a range of forms and genres, including poetry, Jonsonian drama, and Renaissance jest books.

Disability in Nineteenth and Twentieth-Century Britain 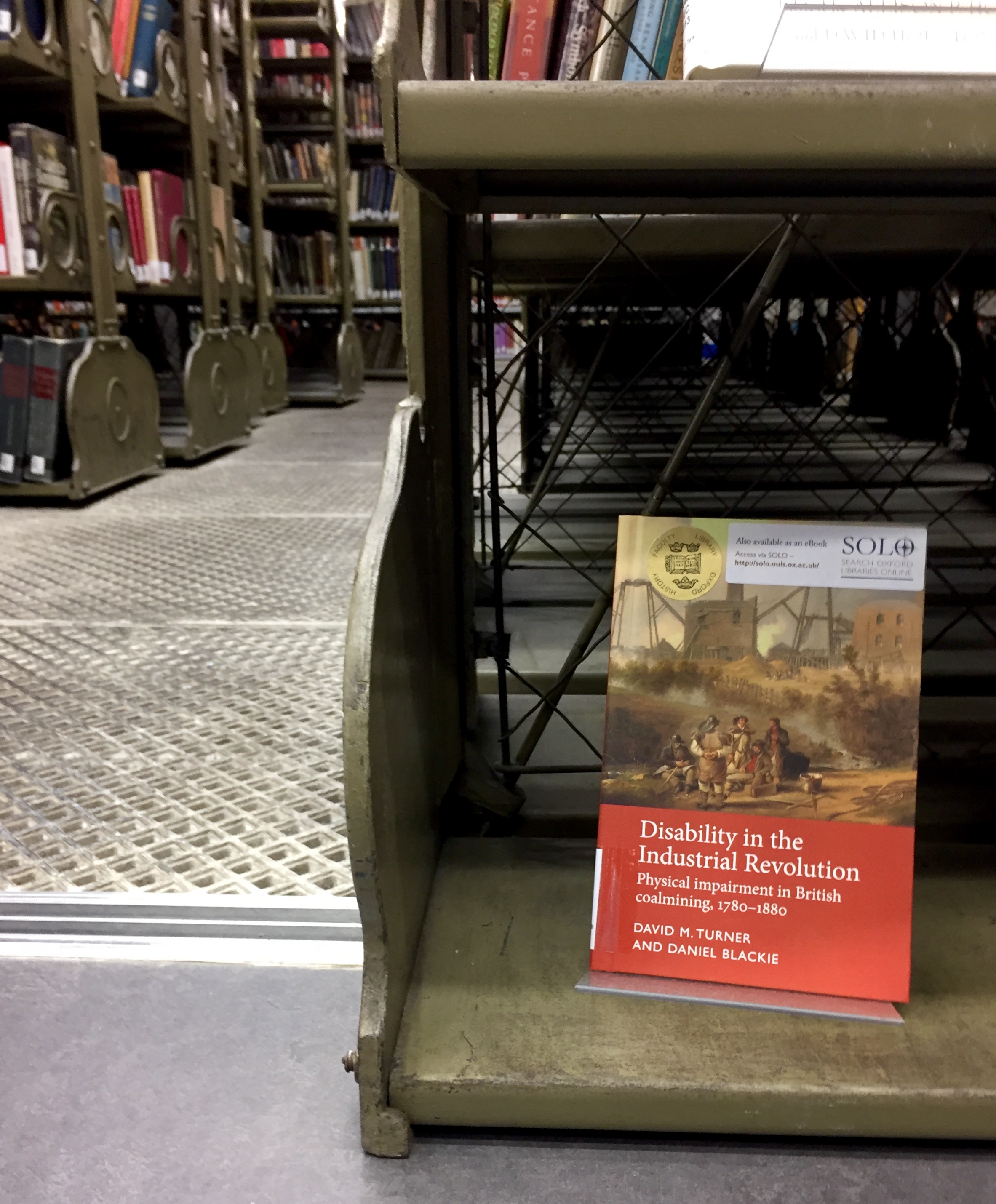 Jameel Hampton’s Disability and the Welfare State in Britain (2017) contextualizes disability within the welfare state under each British government from 1948 to 1975. Using documents that have only recently been made public, Hampton also analyses the 1972 Thalidomide crisis.

Written in 1963, D. G. Pritchard’s Education and the Handicapped, 1760-1960 is one of the earliest pieces of writing in the field of disability history. Though it is outdated in several respects, it is itself a historical source that can be used to understand some of the contemporary attitudes towards teaching children with disabilities in the early 1960s.

The History Faculty Library also has a variety of scholarly texts on the history of disability during wartime. Published this summer, Sarah Handley-Cousins expands the current understanding of wartime disability in Bodies in Blue: Disability in the Civil War North (2019). Several studies focus on perceptions of war injuries. These include Disabled Veterans in History (2000), edited by David A. Gerber, an expansive volume of essays on the representation, public policy for, and experience of disabled veterans in Ancient Greece to the present, and The War Come Home (2001) by Deborah Cohen, a comparison of the post-war situations in which physically disabled war veterans found themselves in Britain and Germany. In War, Disability and Rehabilitation in Britain: ‘Soul of a Nation’ (2011), Julie Anderson traces the attempts to heal the war-injured in British society after World War II, focusing her research on rehabilitation, which included medical treatment, social programmes and even sporting activities. Sue Wheatcroft’s Worth Saving (2013) documents the unrecorded history of children with developmental disorders that were evacuated from areas of England during World War II through an examination of school reports and interviews with evacuees.

All the books mentioned in this blog post can be found on the History Faculty Library’s Disability History Month book display in the Upper Gladstone Link (until 22nd December 2019) and many of them are available online via SOLO.

Find out how to get involved this UK Disability History Month and about the themes from previous year at the UKDHM website.

Learn about the history of learning disabilities with the Open University’s timeline.